How HaleTIP used software from ClearEdge3D to create an as-built model of a complex 120,000-square foot industrial building in just a few weeks

As projects go, this was a big one. With plans to convert a large steel fabrication plant in Michigan into a manufacturing facility for aircraft engines, its owner needed an as-built BIM model created for both the interior and exterior of the entire 120,000-square foot space – and there were only a few short weeks in which to create it.

Among the numerous upgrades the building needed was the reinforcement of overhead steel truss work in the plant’s high bays, so that industrial rail cranes could be installed to move heavy engines around the plant between assembly points. Changes to the electrical, water and HVAC systems would also be needed. The owner requested a complete 3D Revit as-built model – including all structural, architectural and MEP elements – and they wanted it turned around in less than a month.

Even without the tight deadline, the team at Hale Technology in Practice (HaleTIP), the service firm on this job, decided that the only viable solution to a project of this complexity was 3D scanning and modelling, using automated extraction with the EdgeWise software suite from ClearEdge3D. 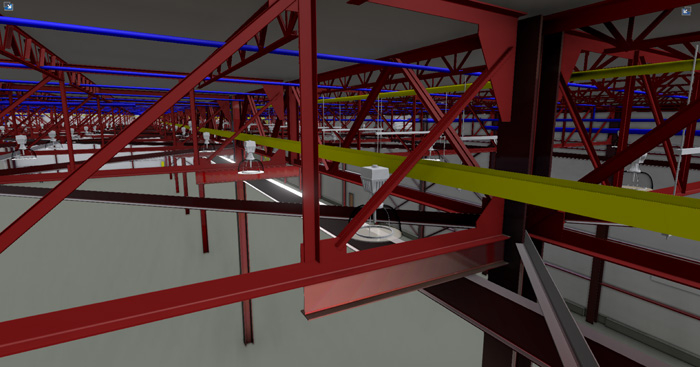 Founded in Rochester, New York in 2014, HaleTIP already has more than 100 projects under its belt, covering a variety of VDC services, including 3D scanning and BIM modelling. The firm specialises in creating as-builts for projects – like this one – where few or no original design documents are available and where a lack of engineering drawings means that the firm can’t make any assumptions about the features that might be found.

Less than a week after contract signing, HaleTIP dispatched two technicians to the site, each equipped with a FARO Focus3D X330 laser scanner. On dozens of previous jobs, the firm had learned that two scanners can capture data 2.5 times faster than one, if operated in a coordinated manner. Working with two laser scanners, each technician could help the other set up the devices and place survey targets and then leapfrog each other through the space. Time was saved by placing the targets so they were captured by both scanners.

“Many hands make for light work,” explains Greg Hale, CEO of HaleTIP. “One operator can even take a break, and the other can manage two scanners for a while, so you don’t have a lot of downtime.”

Another time-saving approach that HaleTIP has incorporated into its scanning work is the use of drones to capture exterior data. Rather than endanger personnel on the building’s rooftop, which in this case was accessible only by a single metal ladder, the firm flew a DJI Inspire drone over the site and collected aerial digital imagery of the roof from above. The drone took about 20 minutes, compared to the half-day that it would have taken a scanning technician to roam around the roof, according to Hale.

The exterior walls and grounds, meanwhile, were scanned normally with FARO scanners and, at the same time, a separate survey team captured accurate X, Y, Z coordinates around the property, including interior and exterior ground points. These were marked with large checkerboard targets, visible to both the laser scanners and the drone. The scanning team collected 220 interior and exterior scans in just 1.5 days.

Modelling the plant HaleTIP uses the same crew to both scan and model, in the belief that this enhances project quality.

“This is a process where the modellers and scanners need to know what the others are doing,” explains Hale. “Modellers know what needs to be captured and how it will be presented [in the BIM], so they are more likely to scan the space in the appropriate way to get that information.”

Back at HaleTIP’s Rochester HQ, the technicians registered the scans to each other and tied the point clouds to the local coordinate system in FARO Scene using the target points. Next, they set parameters in the EdgeWise software in preparation for automated extraction of the steel structure, MEP elements and architectural features.

The most critical structures to be extracted were the steel trusses overhead, since these would likely need modification to accommodate the crane rails. Also of interest were the fire protection system, electrical conduits and HVAC ducts, all of which would likely be upgraded or relocated during the renovation.

Despite the overall size of the building, it was essentially one enormous open space. HaleTIP made the decision to run the EdgeWise software on the entire point cloud at once, rather than break the space into smaller pieces. EdgeWise took only 16 hours to automatically identify and extract the steel beams, MEP elements and architectural features, including floors, from 190 interior scans.

In the automated extraction process, EdgeWise identified each item, measured it and determined its orientation and position. This is where some surprises showed up. EdgeWise was able to differentiate beams that were assumed to be identical. As the technicians examined the specifications of each extracted steel beam, they noticed anomalies. While the overall truss network replicated itself across the ceiling, many of the individual beams were of different thicknesses.

“The differences were fractions of inches. Some beams had half-inch flanges, while others had five-eighth-inch flanges,” said Hale. “The EdgeWise software used its library to figure out the best match.”

The software assigned the various beams to appropriate families for exporting into Revit, where the pieces were assembled into the model. HaleTIP used a photogrammetric package called Pix4D to extract the roof elements from the drone imagery. Using the targets as guides, the 3D roof was added to the model in Revit.

Once the 3D model was complete, the firm added another new twist to the project by deploying virtual reality for quality control purposes. A third-party application called Fuzor was plugged into Revit and allowed the modellers to ‘walk’ through the plant BIM using virtual reality goggles. They examined the model to ensure all features were in place and all spaces were closed off. 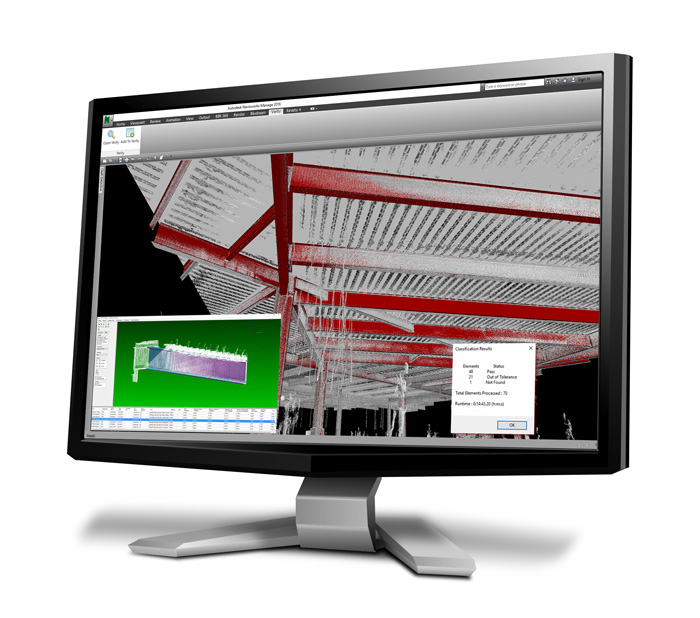 HaleTIP also utilised ClearEdge3D Verity to analyse the deflection of the beams after modelling. EdgeWise models the straight beam best fit to the point cloud, but in some cases the beams in this existing facility were deflected, causing potential problems for new systems and structures being installed. Verity allows a fast, automated check to see if any of the beams exceed the design requirements and thus might require remediation

Results in half the time

Just two weeks after capturing the scans in Michigan, the HaleTIP team delivered the as-built model to the building owner, ready for interior renovations to begin. Processing and extraction in EdgeWise took just 28 staff hours, with the final modeling in Revit taking another 100 hours. The firm estimates that the extraction and modelling would have taken nearly twice as long were it not for the significant time savings using automated extraction – about 220 hours in total.

According to Hale, the resulting model was more accurate than manual methods would have delivered and, without EdgeWise, he says, the project would have required a bigger team. Plus, he adds, a manual survey of the interior using a total station or measuring rods would not have caught those slight differences in truss measurements. From the ground level, these were invisible to the naked eye.

“Extraction software is more accurate than humans because we approximate too much,” Hale says. “Modelling existing conditions can bechallenging. EdgeWise doubles our modelling speed and, at the same time, allows us to mitigate risks by providing accurate representations.”

Looking back on the project, the team now believes that the thicker reinforced beams were installed in the plant as part of an overhead crane rail system that previously existed in the space. This information proved valuable to the owner as they decided where and how to install new cranes for the aircraft engine assembly line.