Renovating historical landmarks requires a careful balance between preserving the architectural elements that characterise the generation of the original build while updating items to support modern life.

The planned $30 million restoration of the Northwestern Mutual Life building in Milwaukee, USA, created the challenge of how to preserve the original architectural elements, while incorporating modern workplace facilities. Constructed in 1914, the Marshall & Fox-designed neoclassical building boasts ten 74-foot high, 422-ton columns with Greek Corinthian treatments, and is crowned by a majestic granite cornice.

SightLine used laser scanning technology to generate the measurements necessary to restore the classic beauty of the Northwestern Mutual Life Building in Milwaukee.

SightLine used laser scanning technology from Faro to generate the measurements necessary to restore the classic beauty. The Faro Laser Scanner builds a 360 degree point cloud of a scanned surface by sending an infrared beam into the centre of a rotating mirror. Using encoders to measure the mirror rotation and the horizontal rotation of the laser scanner, the X,Y,Z co-ordinates of each point can be registered and modelled.

SightLine completed the survey of the cornice in four days, from a distance of 150 feet, within an accuracy of less than a 1/10 of an inch. All measurements were completed without erecting any scaffolding or dropping swing stages over the side of the building. “Almost all of the data was collected from the ground,” SightLine president Penny Anstey said. “The contractor seemed to think the equipment was magic because it could produce a point cloud view as fast as it was being scanned.”

SightLine overcame any line-of-sight issues by strategically placing registration spheres or targets around the scanner and the building. The scans were taken from different points on the ground and roof and linked by the spheres within the Faro Scene software.

The clear-view representation of the linked information produces a visualisation similar to that of an x-ray. The effect left the contractor with the impression that the laser scanner could scan through walls. 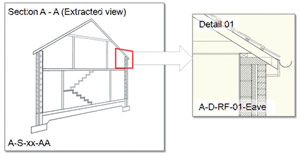 The scans were taken from different viewpoints on the ground and roof top.

SightLine selected portions of the 3D point clouds, and through viewing the cloud in various directions, it traced the items in AutoCAD Architectural Desktop to generate line drawings.

It produced 16 sets of digital 2D drawings of the cornice and building profile. The scans revealed that the original design drawings did not match what was actually built. An entire wing of the structure extended out further than the other, something that was not noticeable to the human eye.

Once the contractor saw the detail generated by the scans, he requested additional information about the building. SightLine provided elevation studies and details on sections through typical

areas (such as window bays) and ornamental architectural elements. More deviations were discovered. While the existing drawings documented finials as stylised acorns, the scans revealed that they were actually barley hops.

SightLine was able to provide the information without revisiting the actual site, due to the amount of data collected during the initial scanning. “Using traditional survey methods to gather measurements could have taken months, considering that a large amount of scaffolding would need to be erected,” said Ms Anstey.

“Not to mention the fact that if workers had missed anything, they would have to keep going back to the site to collect data. And who is to say that the data would have been accurate?”