London is undergoing complete transformation. With over £2 billion of investment being pumped into the redevelopment and renewal of the King’s Cross area, Martyn Day reports on how BIM is playing a part in BAM Group’s ongoing work in reviving a once down-at-heel area

King’s Cross and St Pancras has long been an important transport hub for London – but for many years, much of the area was a run-down waste ground, littered with disused buildings and contaminated land.

The first step in its transformation was the renovation of the wonderful gothic station building at St Pancras, which was adapted to accommodate the Eurostar terminus.

With investment in London booming and Eurostar’s move to the site on the cards, its owners London & Continental Railways and DHL selected Argent as their key development partner back in 2001, giving the company a brief to study,consult and define a master plan that would convert 67 acres into a vibrant mix of office, residential, leisure and retail facilities, with excellent transport links.

Since 2006, outline planning permission has been granted for 50 new buildings, 1,900 new homes, 20 new streets and 10 new public parks and squares. At the same time, the master plan outlines how 20 historic buildings will be refurbished. Infrastructure works began in 2007.

In 2008, building work commenced under the watchful eye of English Heritage in the impressive Victorian goods yard, to create Granary Square, one of the largest urban spaces of its kind in Europe. The original Granary, which once stored wheat for London’s bakers, was the first of its historic buildings to be restored and is now a creative warehouse for world-famous art school, Central Saint Martins. 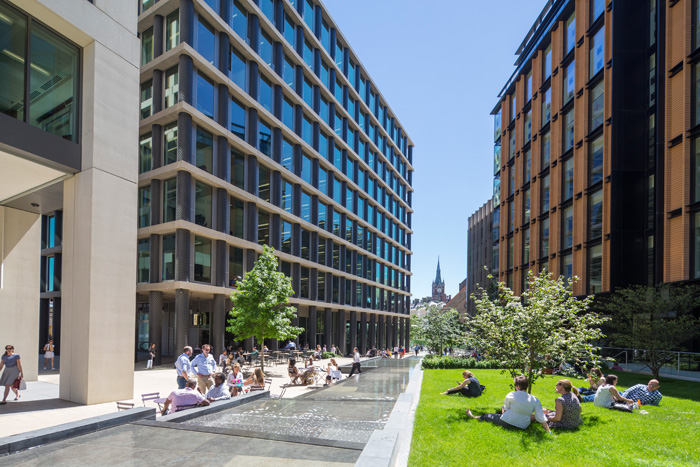 Rendered image looking towards St Pancras, with One Pancras Square by David Chipperfield on the left. Built by BAM Construction, the building is approximately 5,120m2 or 55,120 sq ft net over eight floors

At King’s Cross, construction and building design company BAM is playing an integral part in the renewal process. The firm has designed and built over 11 buildings for Argent on the site, with plenty of work still to do as the project rolls forward. With the firm’s delivery processes underpinned by BIM, many of its buildings boast rich data models, detailing all the design disciplines.

AEC Magazine, along with other members of the press, was invited to visit the site and take a walking tour of some of the completed projects and others still under construction. With a mix of heritage buildings and new builds offering space for housing, offices and retail outlets, the site boasts an eclectic mix of styles, from the functional to the funky.

Each attendee was provided with an Apple iPad Pro, loaded with an array of applications. As we toured completed buildings around Granary Square and towards King’s Cross tube station, the iPads used a 4G cellphone signal to allow us to navigate the mapped area and access architects’ renderings, computer animations and actual live Revit BIM models of the buildings in front of us.

It was pretty remarkable to stand on a busy London street and be able to call up such detailed information on almost everything in our line of sight. Using Autodesk mobile applications, models could be sectioned and manipulated to give a view of floor-level details, right down to the valves and pipework servicing the toilets.

All this data will be used by BAM to manage the buildings for the next 25 years. It will be updated as and when modifications are made. In other words, what we were seeing were examples of living BIM models. 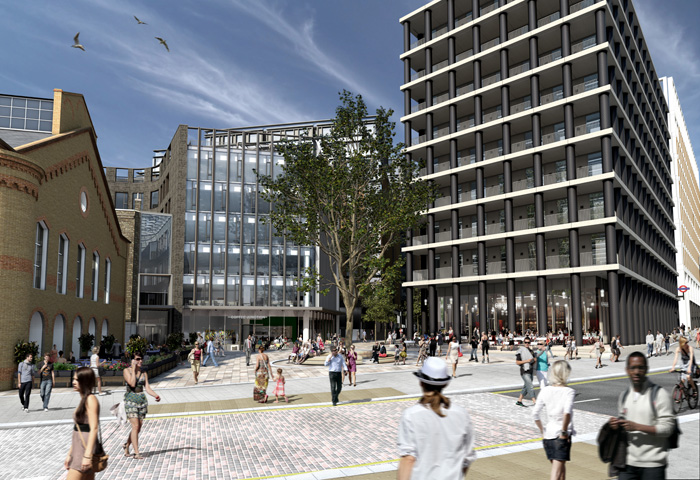 BAM is a great proponent of getting BIM data directly into the hands of those working onsite in the very footings of buildings – not just those toiling in the on-site Portacabins that house temporary design offices. To enable this, all workers have an iPad, protected by a durable case and wirelessly attached to a networked server, enabling them to call up drawings, models and renderings when they need them.

With innovations from Autodesk such as BIM 360 Field (purchased from Vela Systems), cloud-based collaboration and reporting is extended to all workers. BIM 360 Field provides a range of useful features and functions: a library of 2D and 3D documents, checklists, sign-off, tracking and punch/snag lists. It can also capture audio recordings.

As our tour party’s attention shifted from completed buildings to those still under construction, we headed to Thomas Heatherwick’s Coal Drops Yard, a 100-square foot space retail and leisure environment set in an 1850s Victorian coal yard, where BAM is currently at work on a seriously funky roof structure.

On entering the site, one of the first things we noticed was the unusual design of the gloves handed out to those onsite. These expose two fingers, so that the wearer can carry on using their iPad. It’s a mark of how ubiquitous these devices – and the access to digital design data that they offer – have become on BAM construction sites. With everyone having access to the latest Revit models, the design of the gloves means that they have the dexterity to slice and dice those models.

Walking around a construction site holding a fragile iPad Pro is not for the faint of heart, but we were assured by our hosts that BAM had never experienced a single device breakage to date. In fact, the deal it has struck with builders is that, if they manage to keep their iPads intact for two years, they get to take them home. From observation, it seemed that the carrying style of choice was with a strap, like a satchel, and with the toughened rear of the case facing forwards. (In an ironic twist, that no-breakage track record was toppled on the day of our visit – but one device in two years is still remarkable.)

Onsite, BAM is also using laser scanning and digital setting-out tools from Autodesk and Topcon. Capturing the original condition of historic buildings, we were told, is a vital element to any refurbishment job: when work has been done to recessed arches in walls, for example, structures are sometimes found lurking behind the facades. Such unanticipated finds often require design changes to be made on the fly. 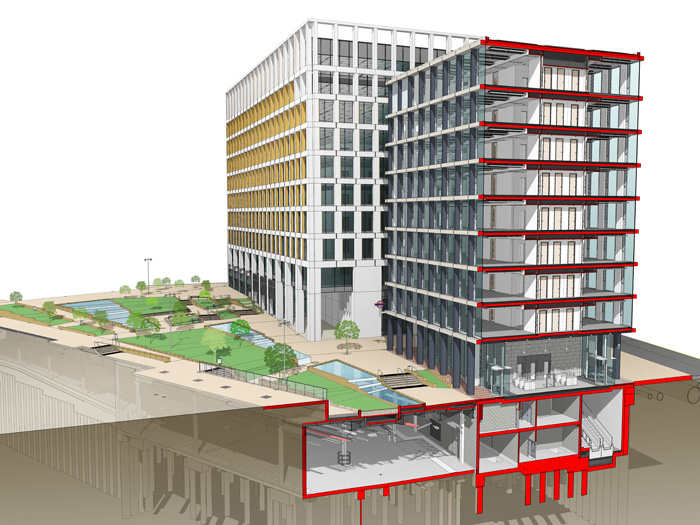 After walking the site, we returned to BAM Design’s on-site office to discuss further the impact of BIM. Refreshingly, these conversations were not characterised by the almost religious fervour sometimes displayed by BIM adopters. The team was frank about the shortcomings of today’s modelling technology, as well as its benefits, and stressed that BAM only adopts those elements that make sense, while continuing to test and evaluate others to assess their potential impact on processes.

With its close focus on providing facilities management services, BAM is leading the way in the UK in updating 2D-based asset management processes to create something that really leverages the time spent on building digital models.

Recruitment remains one of the biggest challenges facing BIM adoption in the UK, according to BAM Design managing director Andrew Pryke. The company is considering a range of ways to recruit and retain its workforce’s BIM knowledge, he said, but in a hot property market and in light of the UK government’s BIM deadline, BIM experts are in high demand and expensive to hire. One potential solution may lie in creating a ‘grassroots’ initiative to build a supply of talented modellers.

The team at BAM is also interested in using Autodesk’s fast-maturing server- and cloud-based services for managing and sharing data. Moving large models around between different project groups is an issue. By deploying BIM 360 Field, BAM is already part of the way to making this easier.

Other technologies under evaluation include the use of drones to monitor onsite progress and track materials. An urban environment always brings with it the risk of collisions, but BAM’s executives are confident that artificial intelligence- led automation and spatial awareness is improving the situation rapidly.

Pryke also expressed an interest in 3D printing, robots and pre-assembly, all of which could reduce costs and improve efficiency. Off-site manufacturing is becoming common practice and BAM has already started to use prefabricated components, reducing the amount of onsite fixing and cutting that needs to be done. Pryke also pointed to development work going on in China on 3D-printed buildings, saying that the UK industry should be embracing these technologies, too. 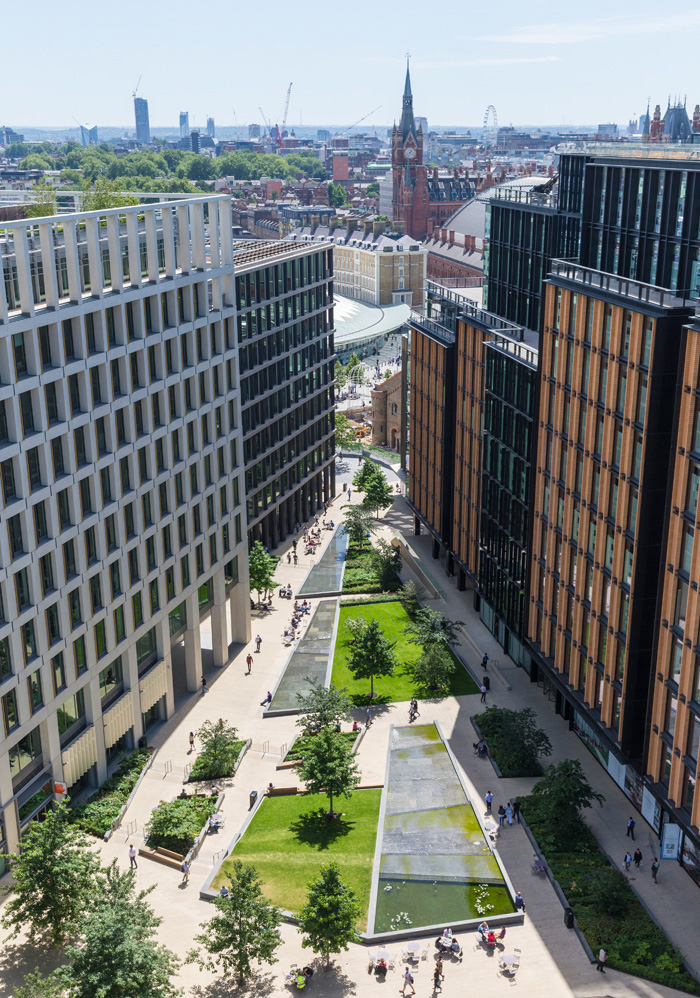 BAM’s use of BIM on its King’s Cross project shows how additional modelling upfront can really pay dividends further downstream. For a company that not only designs and constructs buildings, but also goes on to manage them post-completion, the BIM model makes a lot of sense. Facilities management (FM) is often talked about by BIM firms, but relatively little has been achieved here as yet, putting BAM ahead of the pack.

From talking with the team at the company, it was clear that very little customisation to Revit or components is done. Models are kept as simple as possible, so they include only the level of detail that is required at each phase. It’s all about the deliverables.

The final takeaway is that mobile BIM is here. Having access to the Revit models through BIM 360 Field on a lightning-fast iPad Pro was nothing short of amazing. Slicing and dicing through a 10-storey model in real time, featuring MEP and structural elements, together with sections and elevations, was achieved with the kind of performance you might only expect from a workstation. To extend that experience to the construction site, then, makes absolute sense.

Part of the Dutch Royal BAM Group, BAM is one of the UK’s leading design, construction, maintenance and facilities management firms. Building in the UK since 1874 and forged from a collection of successful regional construction companies, the firm has worked on the iconic to the purely functional and is recognised for its innovative work in aiding the collaborative process of design and construction. With over 28,000 employees, it operates in over 30 countries around the world.

BAM Design, meanwhile, is the architectural, structural and interior design department of the Group and is headed up by managing director Andrew Pryke, who joined in 2012. BAM has been committed to BIM since 2000 and Pryke has been leading the charge.

Revit is the company’s BIM weapon of choice and BAM is a significant global customer for Autodesk. Back in 2012, it signed a £2.8m enterprise-level contract with the software provider, with a view to introducing BIM technology across its global operations, including all UK projects, spanning design, construction and operations and conforming to PAS1192-2/3 procedures.

The company plays an active role in the BIM community, sharing its experiences and metrics with others and advising industry professional bodies on BIM Level 2. It is also advising RICS on PAS1192-3 for asset management.

Educating the supply chain and potential future project collaborators in BIM best practice is an important part of the company’s broader industry stewardship, Pryke believes, as is the provision of hard-to-come-by metrics. At one industry event, for example, it shared how, with an office development in Glasgow, BAM identified savings of 25% by using BI across design, construction and operations. The company believes it can achieve overall savings of 35% by 2020, soundly beating the government’s target of 20% by that year.

The company’s focus on facilities management has led it to experiment with the benefits of downstream re-use of data-rich 3D BIM models. In 2014, this resulted in BAM winning a Technology in FM Award.

And while internally integrating all disciplines using Revit, BAM also works with many third parties that still rely on 2D CAD to communicate design intent or use applications such as McNeel Rhino to generate complex forms such as facades and roof structures. Here, it’s developed the expertise to bring the benefits of 3D BIM to original 2D designs and to integrate construction models with the more complex geometries that more adventurous architects now favour. 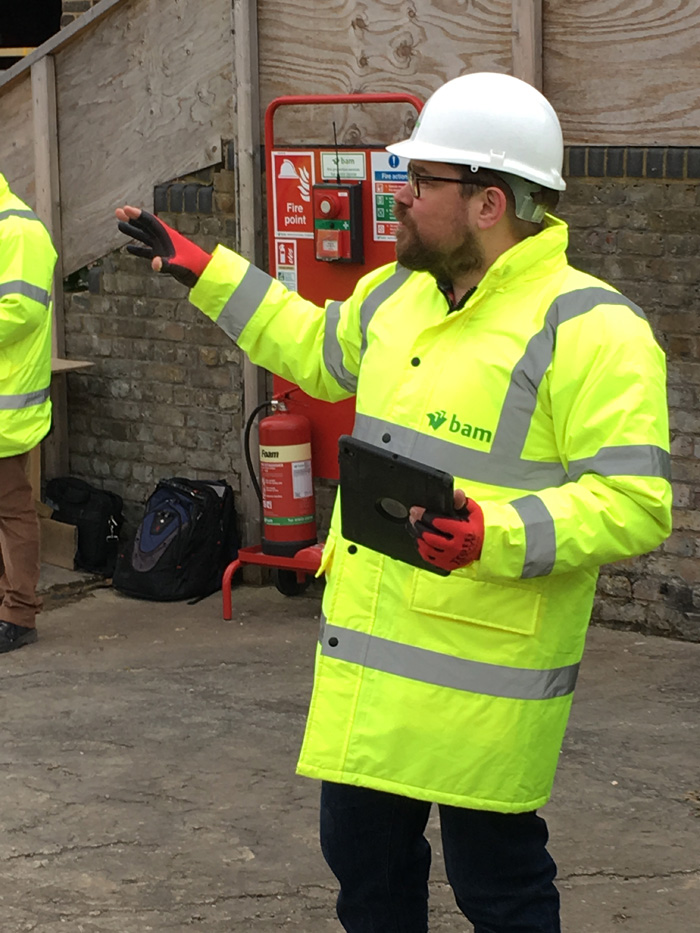