StruCad and StruM.I.S .NET combine to deliver the highest project in England and Wales – The Summit Building, Mount Snowdon, detailed and fabricated by EvadX.

Transporting over 100 tonnes of steel and more than 2,500 bolts up a mountainside was never going to be easy, but was made a lot more difficult by freak June rainfall. With StruCad and StruM.I.S .NET combined to deliver the detailing and project management tools needed and with sheer determination from the EvadX team, this complex project came to fruition.

Modelled and detailed on StruCad, each phase of the project was subsequently fabricated by EvadX with the aid of StruM.I.S .NET.

EvadX was chosen as the main steelwork contractor for the new Summit Building on Mount Snowdon. The visitor’s centre will provide opportunities to learn more about Snowdon, display weather information, advice on descent routes, washrooms and refreshments and shelter.

Andrew Roberts, drawing office manager at EvadX, was the project manager behind the development of the ú9 million visitor centre. He said that, even more so than usual, the collaboration between engineer, architect and main contractor Carillion, became vital to the success of the project.

StruCad and StruM.I.S .NET played a vital role in this project management workflow and are integral to operations at EvadX. Andrew says he was proud to have worked on the centre: ‘You only get to work on maybe one of these in your lifetime, at around 3,560 ft tall it must be one of the highest projects in the country.’

Modelled and detailed on StruCad, each phase of the project was subsequently fabricated by EvadX with the aid of StruM.I.S .NET. Material stock, procurement and all project requirements are simultaneously controlled by the StruM.I.S .NET system – with all projects monitored and fabricated using specific EvadX routing and benefiting from best practice work flow delivered by the system. With functionality from estimating through contract and budget control during fabrication, combined with visual production tracking and scheduling, StruM.I.S .NET provided all members of the project with vital up to date information. The StruM.I.S .NET system ensured that the project progressed accurately and with maximum efficiency, which was vital given that the project was due for completion in this extreme location.

The project was erected by the EvadX team after it was painstakingly lifted piece-by-piece up the mountainside on a tiny railway via a small locomotive. This train journey alone from the foot of the mountain to the summit and back took four hours by the time the train had been loaded up, made its way to the top, unloaded and returned to the base. 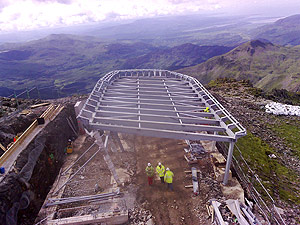 As a consequence all the parts of the steel structure had to be precisely numbered and distributed in numerical order so that they would reach the summit in the correct order; ready for unloading and construction. If the parts had been sent up in the wrong order the team could have been significantly set back by at least six hours.

However, it was the unusually bad weather that made the job even more difficult. Mr Roberts explains: ‘The weather conditions were terrible and winds reached 70 mph at the summit and a couple of times the train couldn’t get to the workers and they had to walk down the mountain to reach a safe area to be collected. ‘We were all delighted that the team managed to finish the construction and erection of the framework on time and sheer determination and hard work were the order of the day.’

The team had an unconventional incentive. ‘I told everyone that if we were able to stay within our budget, I would send up a barrel of beer.’

He made good on that promise and delivered a barrel of beer to the workers as reward for the completion of this most unusual and challenging project.

Eye in the sky
Collaborating in VR
Open by Design
McNeel
The lie of the land
Wimbledon retains advantage
Stride Treglown on the path to 3D
BIM on the high seas?
Advertisement
Previous Post
Next Post