It’s not every day you find a new BIM developer, especially one that has a mature and capable software suite addressing nearly all aspects of digital building design and construction. Welcome to the world of Italy-based ACCA

ACCA’s cloudbased CDE ‘usBIM. platform’ can collate project information in a spatially referenced master model based on IFCWe all know the main play ers in BIM and digital construction – Autodesk, Nemetschek, Trimble andBentley Systems. While we have always hoped that there would be new start-ups and fresh approaches within the authoring tool market, it came as a shock to be introduced to a firm, based in Italy, that had, for a number of decades, been developing professional applications for the European market.

Based in Bagnoli Irpino, Campania, ACCA is about an hour’s drive inland from Naples airport. Situated within the Picentini Mountains, the company’s huge solar and wind powered headquarter building (built in 2017) is a living testament to its own design software and looks out onto the idyllic mountain-encircled vista, across the valley.

The headquarters houses all development, sales and marketing, together with training and an auditorium. There is also a ‘living’ museum for digital design tools of the past, which the company had used, including some very early 8086 computers, Apple Macs, a ZX Spectrum, some ‘luggable’ laptops and my favourite, which was a CalComp Summasketch II digitiser, which I used many, many moons ago with AutoCAD Release 10. 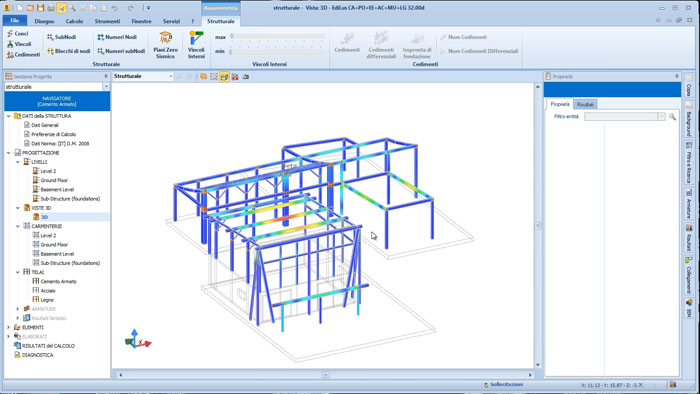 ACCA was founded in 1989 headed up by Guido Cianciulli, as a private business which wrote its own MS-DOS, Windows and Mac OS applications for Bill of Quantities and Cost Estimating. The first commercial product, called PriMus, went on to dominate the Italian market. Based on this success, ACCA went on to develop analysis tools for building models in 1996, health and safety certification, structural and engineering calculators. In 2010 it finally launched its own BIM tool and Revit competitor, called Edificius, which integrates with ACCA’s other construction products. 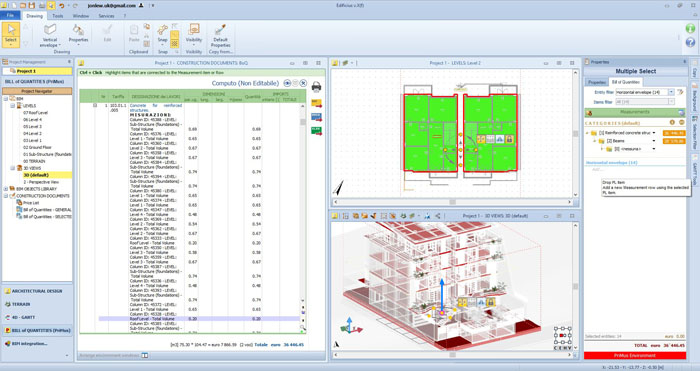 Bill of Quantities in Edificius

Adherence to open standards is an underlying development philosophy, with IFC being a key feature within all products. The company is an active member of BuildingSmart, winning accolades for the quality of its IFC output. ACCA is proud that it has the highest number of IFC certified BIM licences on the market today.

In many respects my visit to ACCA reminded me of my first trips to see Graphisoft and its founder Gábor Bojár. ACCA was also an early pioneer of identifying the benefits of computing to the building industry in the 1980s. Both firms have spent decades building software companies. And because of that, have proud heritages in changing the industry. ACCA and Graphisoft also share strong beliefs in IFC and the OpenBIM movement at key industry fundamentals. 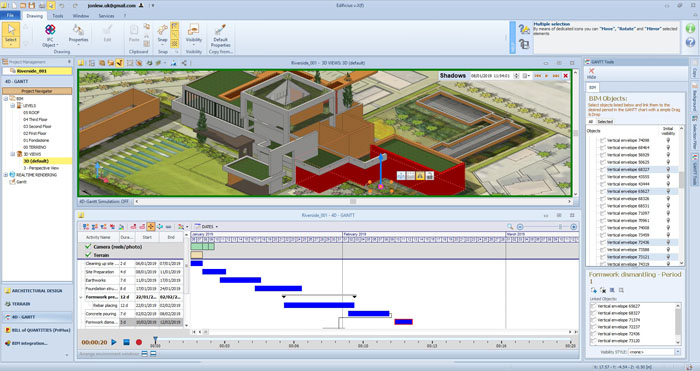 Primarily the firm has concentrated on the Italian and Spanish markets which is is probably why ACCA is not so well known in Northern Europe, despite having English versions of its Windowsbased applications. However, it’s clear that the company has been developing the right tools, and it has certainly thrived in a highly competitive market, especially against the international reach and dominance of firms like of Autodesk with Revit.

Before even discussing the capabilities of the company’s core BIM tool, the first thing to note is the cost. A full seat is just €599 a year, only a tad more than a yearly subscription for AutoCAD LT. And all that for something that is on a par with Revit in terms of functionality. This price point is obviously a key advantage for anyone looking to get into BIM or to change modeller.

Now, I will admit that, for the uninitiated, the naming conventions of ACCA do take some getting used to. Its core BIM tool is called Edificius. In general the company has a lot of brands with ‘us’ in the title, but more on this later. The software is straightforward and uses the Windows ribbon interface.

First set up a project and then simply start drawing in plan or in 3D with intelligent walls, doors, windows, with all the multi-representational variations that you can accept or define yourself.

There are plenty of intelligent cursorbased tools to ensure modelling and geometry is aligned and dimensioned correctly. This thing is really fast too, either in modelling or bringing through a 2D drawing and quickly turning it into intelligent components.

You get real time plan, sections, elevations and isometric views, to create all the construction documents you need and, as you would expect, they are all linked for editing and automatic updates.

At this price point, it’s a bit of a gem and has been industry tested on residential all the way up to train stations.

The software also has a built-in photorealistic renderer and can produce solar studies and high quality stills for clients. The development team has recently upgraded the rendering engine to utilise AMD’s Radeon ProRender technology, which is a physically-based materials renderer which makes the most of underlying GPU, CPU and memory performance using OpenCL. The quality of the interior and exterior renders are superb. And, according to the ACCA development team, images are delivered an order of magnitude quicker than the previous rendering technology, especially on larger scenes.

I was impressed specifically with the quality of the interior images and the included firms photomatch software is a simple way to place the proposed building in the context of a site photograph. 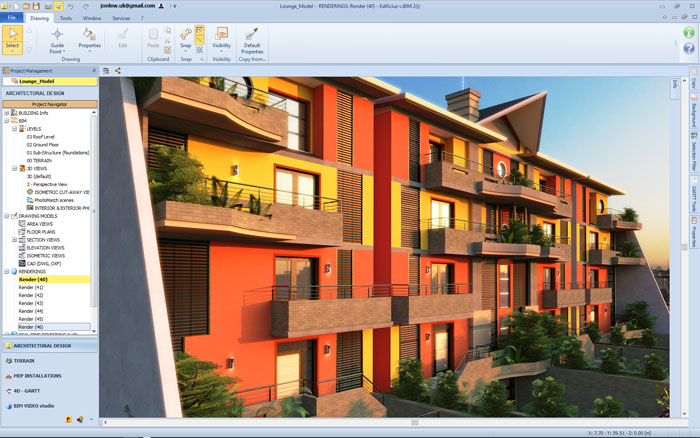 If that’s not enough, this also expands out to VR, which is being built into the Edificius stack, enabling all designs to be VR ready. The company has developed its own interface and construction-ready VR system for designers and clients to navigate through models.

One of the new areas of development for ACCA is the growing need for easy-touse and fast Common Data Environments (CDE) for collaboration. ACCA believes there’s a lot of potential here to use its IFC knowledge and modelcentric approach to connect teams throughout the lifecycle of a building.

Called the ‘usBIM.platform’, the cloudbased application is capable of collating all the project information in a spatially referenced master model based on the IFC open standard. 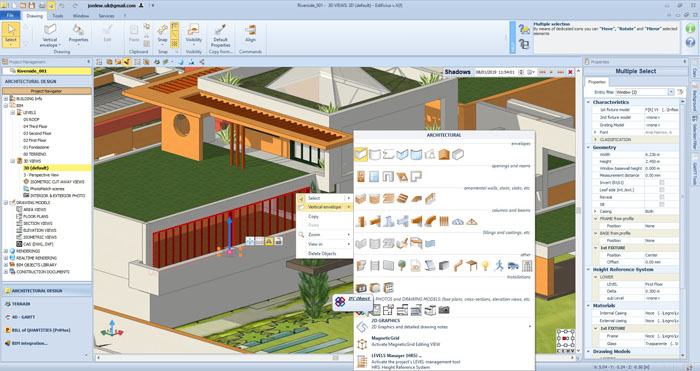 The customisable system is designed to display huge models with a real-time display on desktop or mobile. It includes a built-in gate management capability for handling and issuing Work In Progress (WIP), Shared, Published and Archived data in accordance with ISO 19650. The system also supports data and documents related to the project which can be structured and linked to the model.

usBIM.platform also integrates with ACCA’s PriMus software which is used for managing construction timelines. In fact, this CDE could be used throughout the design and construction phases and then handed on to the owner after completion for asset management or Digital Twin usage.

Based on the technology there is a free IFC viewing application, called usBIM. viewer+. It actually does a fair bit more than just view, it can federate multiple models, edit, modify and convert to other formats.

Having written about CAD and BIM for decades one just doesn’t expect to find a ‘new company’ that has been around for almost as long – and one that has thrived, served on thousands of projects and developed a broad set of advanced building design and construction tools.

From both the scenery, the software and the pricing, it was a bit like stumbling on an Italian BIM Shangri-La.

It’s impossible to do the many developments justice in the space allocation of an article. It’s certainly worth some time looking at Edificius and the usBIM.platform, as well as downloading the free IFC viewer. When this whole pandemic is over, I am looking forward to a return visit.