A London school was recently transformed, with the central courtyard redeveloped and covered it so it could be used throughout the year. The ambitious design required the expertise of structural design consultants, Michael Hadi Associates, using Robot Millennium structural analysis software from ISS.

Exciting architecture and a positive environment are well understood to improve performance in the workplace. Yet within the education system, many schools find themselves stuck with the legacy of less sympathetic and inspiring architecture, without the resources to make significant changes to the structure and design of their surroundings. However, one struggling school in South London secured Government funding to help transform its uninviting structure, identified as a key factor in explaining its poor results.

In 1998 Kingsdale School in Dulwich, London, found itself struggling with poor results, and behavioural issues among its pupils. The built environment of the school was not aiding the situation. The school was built in a rectangular formation in plan, with a largely unused, open section in the middle. Pupils had to walk round the quad along narrow, dark corridors to get to their classrooms. The cramped, busy corridors were difficult for staff to monitor and time-consuming for pupils to navigate between lessons.

An extensive research programme was initiated, which included interviewing pupils, to devise the best solution to improving the school. The chosen design involved redeveloping the central courtyard and covering it so it could be used throughout the year. Walkways would be created through the courtyard for easy access across the school, with the rest of the space remaining open for flexible use such as group work or mealtimes. 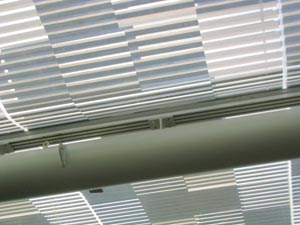 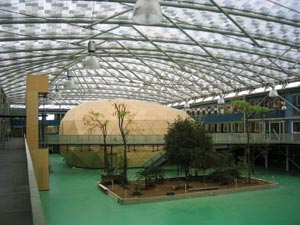 Walkways were created through the courtyard for easy access across the school, with the rest of the space remaining open for flexible use such as group work or mealtimes.

The design of the roof was clearly significant in realising the regeneration of the School. Structural design consultants, Michael Hadi Associates, were brought on board as structural consultants for this vital part of the school’s transformation process. John Roycroft is an associate at Michael Hadi Associates, “Our challenge was to find a roof design that would satisfy several requirements,” he explains. “Firstly, we had to ensure that the weight of our proposed roof was as low as possible to enable a lightweight structure to span the full 40m courtyard width without intermediate supports. We were also knew that the existing building that the roof would sit on had very little spare capacity to resist extra lateral loads from wind. In addition, since this was a Government-funded project, we needed to keep costs as manageable as possible, yet still respect the aesthetic integrity required by the architect.”

Michael Hadi explored several possibilities, including a folded plate ply roof, but the final design was a tied arch structure using transparent ETFE cladding. The ETFE panels contain three skins, controlled by sensors. Both the top and middle layers are patterned. To reduce light transmission in the summer the middle layer moves closer to the top layer, this intensifies the pattern and reduces light penetration. De-humidified air is pumped into the cushions to control them. “The big advantage of ETFE is that it is really light,” says Roycroft. “The quadrangle is 40m by 80m, which is quite a big space, but the roof design only weighed in at approximately 40kg per square metre. It’s only the steel arches that have any significant weight. Lateral loads were minimized by tying the aches at their feet and through detailed analysis of wind pressures through wind tunnel testing.”

The chosen design of the roof created a significant structural engineering challenge for Roycroft and his team. The roof comprises 22 arches of 11 different shapes and sizes, which needed to be pre-stressed on site to compensate for wind uplift pressures they could encounter once in position. “We had to define what the curvature of each arch would need to be prior to installation for the steel fabricator, and then what the final position of each arch would be once attached to the school roof,” explains Roycroft. To complicate matters further, the slenderness of the arches was outside the limits set by the now superceeded code BS5950 Part 1:1990, in order to meet the need for weight reduction and aesthetic appeal. The slenderness of the structure, plus the presence of cables dictated that a full detailed geometrical nonlinear analysis be carried out.

At Michael Hadi Associates, the structural engineers prefer to use analysis and simulation software to confirm their hand calculations, rather than immediately turning to their computers for a quick answer. “Using computerised analysis cuts out people’s intuition,” explains Roycroft. “If you’ve done preliminary calculations yourself beforehand, when you run the problem through a computer you have a much greater understanding of the process – and a better idea of whether the result that the computer comes up with is accurate.”

But on this occasion, Roycroft knew he needed some specialist assistance to ensure the arches were pre-stressed in the right way and to the correct geometry. “We had to be confident that second order effects were being modelled accurately, particularly as we were using a compression member that was very slender,” he explains. “We hadn’t got a program here that modelled cables in a non-linear fashion – crucial for the accurate positioning and tension of the arches. We tried several structural analysis packages, but we quickly determined that Robot Millennium was the best tool for the job.”

Robot Millennium from ISS is a complete structural analysis solution, with a particular strength in cable analysis, but also featuring frames analysis, FEM plates, shells and solid elements, together with code checks, dynamic analysis, both geometric and non-linear analysis and many other advanced features. The very straightforward GUI allows the user to model complex structures quickly and accurately and, crucially for Michael Hadi Associates, Robot is a ‘true’ non-linear solution with many different non-linear solvers and parameters available, ensuring model convergence of even the most challenging of structures. Using Robot, Roycroft could confidently model the true behaviour of the structure and not only the applied prestress but also the insitu cable prestress under all loading conditions.

“Robot is very user-friendly and as it’s Windows based the interface is intuitive and quick to learn,” says Roycroft. “In addition, if you do come up against difficulties, the Robot support team is excellent. You can email them an analysis problem and they are quick to help and sort it out. It’s also important that they understand the engineering challenges we face, not just the software issues. We can explain situations from a technical point of view and they have a good understanding of how best to find the right solution.” 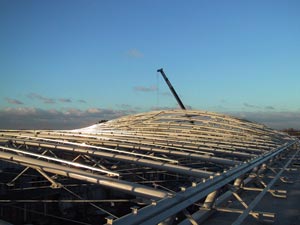 The weight of the roof had to be as low as possible to enable a lightweight structure to span the full 40m courtyard width without intermediate supports.

The pre-stressing of the arches needed to be absolutely accurate to ensure the sliding bearings on one side of the arches were specified correctly in terms of range of movements expected from temperature, gravity loading and wind.

“We also had to be confident that enough prestress was present to make sure the arch was always in compression under design wind uplift pressures. Having spent a lot of time looking at the problem both qualitatively and numerically ourselves beforehand, we were confident that even though our solution went beyond normal slenderness limits it would still work. Even so, the positive and accurate results we got from Robot gave us the confirmation and confidence we needed,” says Roycroft. The solution has also saved the team a considerable amount of time. Roycroft estimates that to manually calculate the pre-stress requirements of the 11 different types of arch would have taken weeks. “It was a weekend’s work using Robot Millennium,” he says.

On the day of installation, each arch arrived on site in three pieces before being bolted together. Special lifting and pre-stressing cradles had been designed by Michael Hadi Associates for the specialist steel contractor SHStructures to lift each section into position. When the roof was finally ready to install, Roycroft and his team checked the pre-stress levels on site and discovered that Robot’s results had indeed been very accurate. “It’s fair to say this was a very successful project,” says Roycroft. “From our point of view this was a real team effort, and the people at ISS and also the ROBOT Millennium software were a part of that team.”

The resulting roof has transformed Kingsdale School. The new roof has opened up the space and narrow corridors are a thing of the past. In designing the roof, Michael Hadi Associates were prepared to go beyond pre-defined limits to create the best possible solution for the architects, and ultimately for the benefit of pupils at the school. “This was a project that we all enjoyed working on, since the results could have such a positive effect on the school,” concludes Roycroft. “We knew this roof and space could be very special from the beginning, we were entrusted by all involved to make it a reality; Robot Millennium was pivotal in getting us to that end point.”

The culture and academic fortunes of Kingsdale School have transformed alongside its architecture. Grades have risen significantly, and the school is now a specialist college for the performing arts as well as a multimedia environment for academic, creative and vocational studies. Attitudes towards the school have completely changed, and these days staff and pupils alike are eager to welcome visitors to what they call “the DFES’s greatest educational project – Kingsdale School”.