Formed in 1964, Glasgow-based CRGP is a multi-disciplinary construction consultancy that specialises in architecture, building surveying, quantity surveying and project management. The firm operates with a keen eye on sustainability, environmental factors and health & safety.

As well as being Quality Assured, CRGP is also recognised as an Investor in People for its continued investment in employees including training. To complement this staffing investment, the practice has always strongly sought to utilise the most suitable of CAD design tools to enhance client projects and provide a competitive edge during the design process.

To support this, CRGPÝs architectural team is provided with Autodesk Architectural Desktop 2005 (now AutoCAD Architecture) and AutoCAD LT, while other departments within the company used AutoCAD LT for less design-orientated tasks.

Gary Forster, Associate at CRGP, explains that ýwhen we were looking to purchase a new design tool in 2004, the price of Architectural Desktop (ADT) was comparable with AutoCAD, so we made a conscious decision to purchase ADT with the intention of exploring its architectural functionality at a later date. Due to the increasing volume of work and imminent deadlines that later date never materialised, and consequently the architectural team never used any of the additional functionality above and beyond that included in standard AutoCAD¯.

Despite having invested in AutoCAD regularly since 1989 CRGP realised in 2006 that it needed to fully review its CAD software as its then-existing software release was soon to be retired by Autodesk. CRGP discussed at length with its CAD supplier at the time the possibility of implementing Revit technology in place of ADT and received advice on best practice for software roll-out and implementation.

Recognising the substantial sum of money needed to invest in Revit as well as other set-up costs such as training, CRGP decided to seek a second opinion and contacted Excitech. Following a number of demonstrations of the entire Autodesk Architectural platform, CRGP realised that the functionality required might already exist in ADT and decided to look further into utilising its existing software.

ýOnce we were reminded of what ADT was actually capable of and saw all the additional functionality that had been added since we made the initial software purchase, it presented us with another option and a difficult choice to make,¯ explains Mr Forster.

ýWe were becoming increasingly aware of the groundswell of support Revit was receiving from within the industry and the perceived benefits it could bring to the company, but at the same time realised the implications that adopting this could mean for the business. Moving to a Revit environment would have meant a financial investment not only to replace the entire companyÝs CAD software but could have meant a significant upgrade of our IT infrastructure and of course the necessary training and support.¯

Having seen the various presentations from Excitech, Mr Forster decided Revit was a less viable option than better utilising the existing software investment in ADT for a number of reasons. ýIt was absolutely critical that, regardless of choice, the entire design team across all divisions were able to work on the same design platform, be it DWG- or RVT-based. ýWe were also conscious that DWG was and still is considered the industry standard and that a number of partners may not be able to collaborate with Revit drawings. Finally, given workloads and the number of imminent projects we could not justify or afford for drawing production to cease while training and implementation was undertaken on a whole new software platform.

ýAs a company, we were keen on a BIM solution, but when the Architectural team saw what ADT could achieve while still being in the traditional AutoCAD environment the decision was ratified,¯ says Mr Forster. 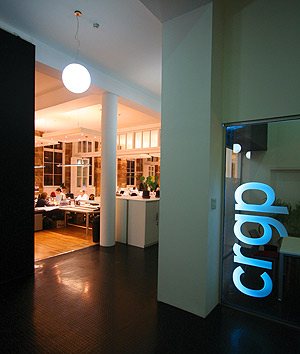 Best use of technology

Having decided that re-investing in ADT was the most logical choice, CRGP undertook a significant software upgrade including all licences of AutoCAD LT and subscriptions. Excitech was tasked with protecting the companyÝs then soon-to-be retired software investment and to continue to provide its design teams with the latest design tools. For CRGP it was essential that, having committed to investing in ADT, the productÝs functionality and capabilities were explored in more depth.

ýWe wanted to use ADT as ADT. That sounds odd, but we had only ever used the product as AutoCAD. Following a number of discussions with Excitech, a range of areas where we could focus were highlighted to ensure that we would get the most productive use out of the software.

ýThese included improving the output of drawings and renders for presentations (including using 3D functionality), standardising drawing and presentation styles and exploring some of the key architectural features in the software,¯ explains Mr Forster.

ýExcitech carefully analysed the requirements of CRGP creating a bespoke training programme aimed at delivering various levels of training throughout the architectural team. From the outset, CRGP identified the need to create a group of CAD Co-ordinators; in essence evangelists who would gain a more in-depth product knowledge than general users. As well as gaining a high level of proficiency, the CAD Co-ordinators would provide input into the ongoing use of ADT within the company and deal with support issues as and when these arose.¯

A bespoke one-day AutoCAD/LT update training course was provided to the entire design team (36 users) to enhance their understanding of new features added since the last purchase. Specific product training then followed, which focused on the companyÝs 21 ADT users (divided into small groups) in the form of two one-day training sessions. The CAD Co-ordinators then received two further days training on system configuration and project configuration.

Following on from the training, the architectural team commenced work on a three-storey commercial project, which CRGP felt was suitable to trial using the newly-learnt skills, and while some of the functionality learnt was not utilised, the final result was a 3D model that could be used to present concepts to the client and gain feedback.

ýThe initial project gave us the opportunity to cut our teeth with ADT,¯ says Mr Forster. ýHaving completed the project we noticed a number of major advantages, particularly in terms of time savings during the conceptual modelling stage.

ýPreviously, conceptual work was completed using Google SketchUp or Autodesk VIZ, but this meant that everything had to be re-drawn and scaled to create an accurate CAD model. With this project, we used ADT to produce all the conceptual work and once we started using the tools we realised that what had previously been done in SketchUp or VIZ could be done just as quickly in ADT,¯ explains Mr Forster.

CRGP continue to view ADT as a long-term investment despite working on a number of projects. ýItÝs not the sort of thing you can use effectively overnight. ItÝs a gradual process and the more you can understand the more you can push forward with things. WeÝre hoping to roll out CAD Standards within the next three to six months and will be working with Excitech on developing these.

ýThroughout the process Excitech has been incredibly helpful. For us, it has not just been about the training, but the whole service weÝve received. Whenever problems have occurred, or guidance has been needed, we have been able to work with Excitech to resolve these. It means for us that it is not just a business transaction but an ongoing relationship,¯ explains Mr Forster.

The decision has been made to extend the basic AutoCAD training through to the companyÝs building surveyors team. Mr Forster explains: ýWe saw the benefits it had brought to the architectural team and saw no reason why this should not be extended. As an Investor in people we have an ongoing commitment to invest in our staff and we see training as a good way to retain our highly talented staff. Our previous experience has shown that training has empowered and encouraged our staff as well as making them more productive, which can only be a good thing for any company.¯