Ever since Bentley Systems acquired Acute3D in February 2015, it has forged ahead with Reality Capture, integrating key technologies into its foundation MicroStation platform and beyond. By Martyn Day and Greg Corke.

At the Year In Infrastructure (YII) conference in 2015, Bentley Systems showed exactly how viable reality computing techniques had become, showing off ContextCapture, a new software product based on the Acute3D technology it had acquired earlier that year. Starting with hundreds or thousands, of photos captured by drone or taken by hand, ContextCapture automatically produces a detailed 3D reality mesh. In other words, an engineering ready 3D model complete with textured photos.

In just one year, Bentley has come a long way. It has decided that reality meshes are now a new fundamental dataset for MicroStation – in addition to 2D vector lines, 3D solids, 2D raster and 3D point clouds. It has deeply integrated the reality mesh capabilities into its platform stack and already developed applications for users to integrate mesh work into their design and documentation processes.

In the early days of reality capture, it felt that Bentley competitor Autodesk, was pushing the boundaries, having previously licensed a past version of the Acute3D technology, as well as develop ing point cloud applications such as Recap and Memento. However, Autodesk has a disparate array of products – Revit, AutoCAD, Civil 3D, Inventor, Fusion and Infraworks, which appears to have slowed deployment and direction.

Now Bentley appears to have taken the initiative. At this year’s YII conference, it demonstrated OpenRoads Designer, an incredibly dynamic environment for civil design which felt as graphically-rich as a game but generated road designs with cut, fill, 2D documentation and even enabled live ‘optioneering’.

Now that reality mesh technology is in MicroStation, it seems every Bentley vertical application will get a ‘Designer’ variant, with versions for the building design application AECOsim soon to be in public beta. This would allow buildings to be designed in context, exterior facades grabbed for remodelling and existing brown or green field sites quickly captured and imported.

Complementary applications such as SITEOPS can run optimisation algorithms on the mesh, to provide the best orientation and layout of buildings and roads. Cut and fill requirements for grading can also be explored accurately, very early on, helping reduce risk when budgeting for construction.

Bentley Descartes provides a number of tools to get more value from the data. It can produce digital terrain models straight from the mesh, as well automatically extracting features, such as breaklines. Attribute information can be added to specific parts of the mesh using the new reality mesh classifier. This enables users to search and query the mesh based on the associated data, providing a means to visualise geospatial information.

The use of reality meshes goes way beyond the design phase. For construction, drones can be set up on flight plans for continuous survey. Daily models of the construction site can be automatically produced, so progress can be monitored, materials located or volumes of material measured. This record of building progress could be stored and accessed later for as-built or facilities management information.

Bentley’s reality mesh technology is not just being used within the Bentley sphere. Topcon, for example, is incorporating ContextCapture image processing for its mass data collection via drones. This is part of a bigger ‘constructioneering’ collaboration between the two companies where survey, engineering and construction data are more tightly integrated and digital engineering models are used to feed the 3D machine control that guides the construction machinery.

Laser scanning, the original reality capture technology, isn’t being forgotten. Bentley ContexCapture now supports both point clouds and reality meshes in a single environment. Bentley showed how this could be used to great effect on a rail maintenance project, where a train mounted laser scanner provides a very accurate survey of the track, while photographs taken from a drone provide a broader ‘reality mesh’ context around the track. 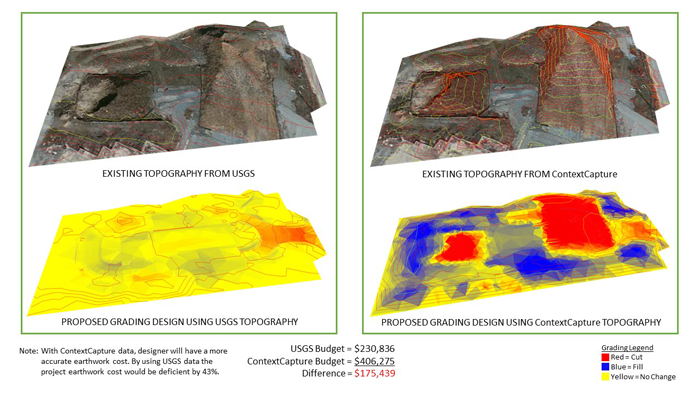 “The most difficult problem that we had was how to manage such a complex data structure. We call the format 3MX,” he explained. “It’s one thing to take photographs and create a mesh but it’s another to actually do something with it, such as measure, extract ground levels, clash detections, add models and create a hybrid environment.

“We spent a lot of time working out how to integrate meshes into MicroStation to drive workflows with our existing products, as well as our next generation platforms.”

With many of its customers working in distributed teams, we asked how Reality Capture meshes would be shared and delivered, Das said, “We had to work out how to stream the data from our Azure cloud service, as 3MX files are not small, so we compress and expand them on the fly and have to cache areas around the area of interest, ready for scrolling. In some way it’s very similar to what we had to do for point clouds but it’s an order of magnitude in complexity; our meshes have many densely packed triangles, draped textures, snap points, it’s not as straightforward as an array of 3D points. We also add a level of intelligence to understanding the meshed objects making selection and identification easier.

“The application area of Reality Capture is just huge, many of today’s projects actually start off as brownfield sites and even if they do have drawings or a CAD model, it’s probably out of date and not ‘as built’. Construction, civil, industrial, mining, wastewater and even facilities Management. The only area we have not yet found a solution for is interior design as it’s not yet practical to fly drones inside buildings…. But we are working on it,” he smiled.

Bentley’s Reality Capture capabilities are available today and can benefit a range of existing vertical applications. This certainly highlights the benefit of having a single platform through which a vast array of applications can access common datatypes. While many people will utilise this technology without a thought of what’s happening under the hood, it’s actually an incredibly powerful hybrid environment, as models may be derived from data sourced from a wide variety of inputs.

In many ways, we are seeing the CAD software development community taming technology which produces ridiculously large quantities of data and making them incredibly digestible in tools we are familiar with. Design tools are finally starting to feel as interactive as games and yet they’re incredibly accurate and useful. The next challenge will be figuring out how to economically store gigabytes of historical project data and serve on demand, I’m sure Projectwise will be able to help you there too.

An important part of Bentley’s YII event is the Be inspired awards ceremony, not only for congratulating innovative customers, but offering the opportunity to see detailed presentations of significant projects. Despite reality mesh technology being relatively new to Bentley, there were a number of projects from customers that were actually using it on live projects.

The A9 project, presented by joint venture CH2M / Fairhurst, is a £3billion extension to a 130km single carriageway that runs between Perth and Inverness. It’s the longest trunk road in Scotland and runs through beautiful and remote landscapes which are heavily protected by environmental designations, including the Cairngorms National Park.

CH2M / Fairhurst is working on a 43km section of the road, taking it from design development through statutory process to supervision and construction of a new dual carriageway road to cut travel times and increase safety. 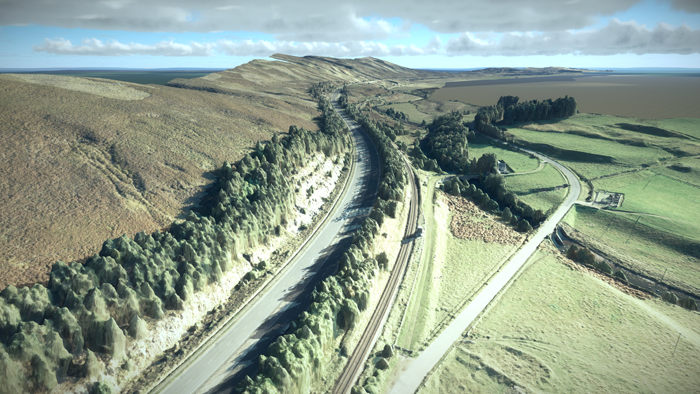 Reality model of the A9 trunk road in Scotland

CH2M / Fairhurst have design teams in multiple locations and use Bentley Projectwise to glue them together and establish string workflows. The project uses the following Bentley applications: Microstation, OpenRoads, OpenBridge, Descartes, Acute3D, LumenRT and MX. The team used a combination of satellite digital terrain maps and Acute3D photogrammetry to mesh captures to build a vast model of the existing road to model in context and to enable various design options to be assessed. This was also used at regular public meetings to engage with communities who would be affected by the building work and benefit from the road upgrade.

To double check the quality of the Reality Mesh, CH2M/Fairhurst sent people to various part of the valley to take photographs, which were compared to views from the captured model. The end results were impressive with very accurate correlation between the real and the modelled topography and textures. With such an accurate and lifelike model, combining CAD data with a reality captured mesh, the team immediately saw the benefit in stakeholder engagement and noted the benefit of letting people ‘fly around’ the model to see the scale of the work and assess the impact on the countryside.

Another Reality Mesh project in contention at Bentley’s YII was the Helsinki 3D+ project, which aims to build a 3D platform over 3 years to aid development, analysis and achieve environmental objectives. This information would be made open to citizens, companies, developers and universities.

Helsinki 3D+ is not actually the first 3D model of Helsinki; the Finns love 3D and BIM and as far back as 1985 had created a 3D model of the city, albeit limited by the technology available. In 1999, a second model was created using game engine technology and used as a real-time simulator in exhibitions and then again in 2003.

This time, the Helsinki team wanted to go beyond the visual aspects of a moRdel and wished to use the model to assist in making Helsinki a ‘smart’ city. Using CityGML and open standards, the core team of only three people are building an accurate model at LoD2 of over 400km2! To add to the CityGML and GIS imported data, and using Acute3D, they captured 50,000 oblique images which enabled a reality mesh model with 10cm accuracy. IFC BIM models of new buildings or proposed buildings can be added too.

Launching in December 2016, the 3D infrastructure model will be provided online. There are plans for 3D virtual parks and even capturing underground and ‘underwater’ city models too. Serious urban analytics will be applied measuring urban spaces, Co2, GHG emissions and solar potential.

The quality of the model is excellent and the ability to fly over the city in real time must be seen to be believed. It’s even more impressive, considering that such a small team managed to pull this off and there is a lot of depth to the many layers of georeferenced information that it contains. See the video here.

This article is part of a Bentley Systems Year In Infrastructure special report. Read the other articles below

Cloud analytics: Knowledge is power Bentley is helping engineers ‘design out’ delays before they happen, by giving them access to real-time supply info.

The future of AR: The HoloLens and the use of reality meshes have got round tracking issues, paving the way for new AR applications.

Bentley Systems futures:  Bentley Systems may still be preparing for an IPO, but there has been some important news on its relationship with Siemens that could have big ramifications in the future