With significant speed increases in this bumper update to ArchiCAD, Graphisoft is clearly aiming to get the attention of Autodesk Revit customers who are frustrated with slow model performance, writes Martyn Day.

Speed is something that designers have always striven for with their tools. Even back in the good old days of 2D CAD, drafters wanted the latest Intel x86 workstations, with ‘masses’ of RAM (4MB) and powerful graphics cards, albeit ones capable of providing only SVGA in 256 colours.

Just when we started thinking we had more than enough power on the desktop, and file exchange ‘just worked’, the industry moved to BIM, which combines 3D geometry, proprietary databases, parametric constraints and rich layers of metadata, requiring lots of RAM and processing power.

This move has driven us back to trying to squeeze every last drop of performance out of our workstations. Speed is one of the biggest issues in BIM today and CAD managers have to spend their time working out strategies to handle large unwieldy datasets to keep projects on track.

In general the industry is creaking under the combined effect of big data shoehorned into ‘old’ BIM software. Neither the complexity of models nor the advances of processor architectures were originally planned for in the current generation of applications and many software developers have failed to fully utilise multi core processors, instead relying on a single processor core to do most of the heavy lifting.

Hungary-based developer Graphisoft has been well aware of this change and over the past four releases has been building comprehensive multi-core support into its ArchiCAD BIM platform. This parallelises the computing that’s necessary for handling large BIM models. However, the latest release, ArchiCAD 19 brings a whole new dimension to using the multi-cores available. 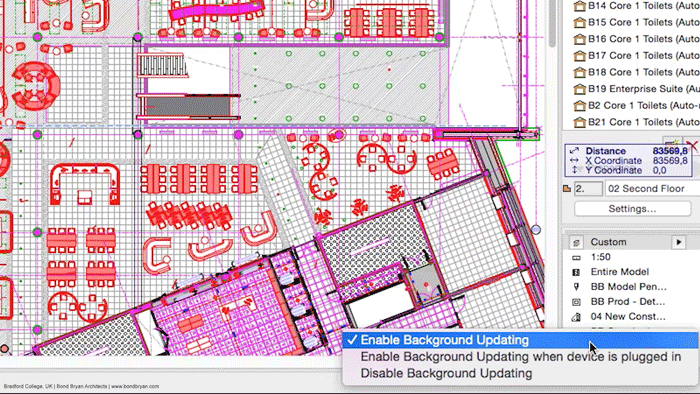 Background updating can be toggled on and off

Prior to release 19, ArchiCAD’s multi-core capability would break up tasks and allocate those to individual cores on your workstation’s processor. This was very much on demand and related to the current view. With this release, ArchiCAD further enhances its use of multiple cores by constantly using the spare capacity of the workstation CPU and ‘guessing ahead’, the processing tasks that it ‘thinks’ you are going to do next. While this might sound fanciful and indeed a touch too much like snake oil or clairvoyance, it’s actually quite a stroke of genius.

Obviously, ArchiCAD can’t actually predict the future but there have been changes to the interface which assists it in getting ahead with the processing workload. With 19, Graphisoft has introduced the concept of tabbed workspaces, which work in a very similar way to tabs in a web browser, but each tab contains a workspace. This makes it much easier to flip between sections, model view, drawing view, render or elevations.

The predictive processing uses these as clues as to what you will be doing next, As you work in one tab making edits and updating the design, the software will dynamically allocate the update of the model in those tabbed views to spare cores or processing capacity. The net result is that moving from tab to tab, users will find the model ‘instantly’ updated or a long way into performing a task — such as a 3D section. So the software appears significantly more responsive and makes the most of today’s multi-core architectures.

Graphisoft explained that in addition to the ‘tabbed clues’ for predictive processing, the new predictive algorithm will do some analysis as to workflow and commonly used tools, to further refine the allocation of processing. To ensure that all this additional ‘front-loaded’ processing doesn’t impact the overall speed of ArchiCAD, the software leaves one core free. By using this unused computer capacity, even if the software anticipates incorrectly, nothing has been lost.

As to how much quicker this makes ArchiCAD 19 over 18? Graphisoft stated the benefit can be from ‘Instant’ to a 70% improvement in creating 3D views. The opening time for all model-based sections, elevation or 3D documents has dropped by half. Beta testers have told me that it’s a significant improvement and absolutely screams on Apple’s new Mac Pro, which comes with an Intel Xeon processor with up to 12 cores. 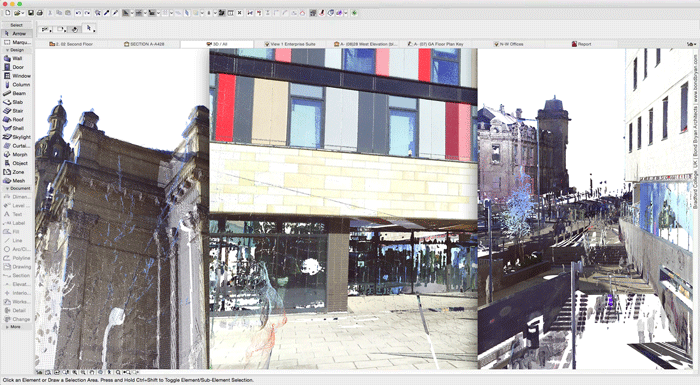 It’s not just editing and rendering that have seen speed improvements in this release; graphics performance has also been further optimised with faster and smoother OpenGL navigation. It is now possible to navigate through extremely large models with a ‘flickerless display’, reaching frame rates well in excess of 30 frames per second. In reality, this kind of performance is games software territory and brings real-time performance to BIM.

Tabs: Workspace is really important and so many BIM tools today take up valuable screen real estate with menus and frames. 19 does away with many of these menus, making them ‘pop-up’ when the mouse is moved to the top of the screen and the new ‘tab’ views make it much easier to navigate.

Rhino: Graphisoft has decided to team up with McNeel, developer of the Rhinoceros NURBS-based modelling tool and Grasshopper computation design environment.

ArchiCAD 19 has been enhanced to better import Rhino geometry and there are plans to further link Grasshopper to drive complex forms in future releases. This saves Graphisoft having to develop this type of functionality and there are thousands of proficient users of Rhino and Grasshopper out there.

Point clouds: ArchiCAD 19 now reads industry standard point clouds for the import of laser scanned survey data. This is formative functionality at the moment but will be expanded on in the future. For now it is possible to select and model BIM objects to the XYZ points.

Productivity: In general productivity, Graphisoft has added dimensional improvements for the ease of laying out areas where dimensions and labels can automatically overlay and become confusing.

ArchiCAD 19 has overhauled its Guide Lines function to better match the way you work, making precise input even more intuitive. There are new on the fly snap guides and line smart guide lines which stay as long as you want them (permanent if necessary on a separate layer)

Layouts can now be exported (not just model views) with their drawing layers to PDF format. In the resulting PDF document, you can show or hide content by layers, or navigate among layers.

Teamwork and BIM Server have also seen some useful updates, such as a BIM Cloud / BIM Server diagnostic tool.

BIM X: The company’s unique portable model sharing format has been slightly enhanced, where authors can control which element information will be published as part of the Hyper model.

MEP: Collision detection now works for all elements classified as MEP-type in Element Settings and not just for MEP Modeler elements. As a result, collision detection works on all imported IFC MEP elements (regardless of which MEP application exported the IFC model), and all ArchiCAD project MEP Objects.

The final thing to note is a small corporate change, but Graphisoft also unveiled its new logo, which is actually very similar to the old one but now includes the brand ‘Nemetschek’ within it. Graphisoft is owned by Nemetschek, a German developer, which started out with Allplan — a BIM system popular in Germany.

Nemetschek also owns Vectorworks (Formerly Minicad), Maxon (rendering) and Bluebeam (PDF workflow) amongst other firms. Historically the company has tended to ‘silo’ its acquisitions but now there appears to be a more cohesive approach to push the brand. 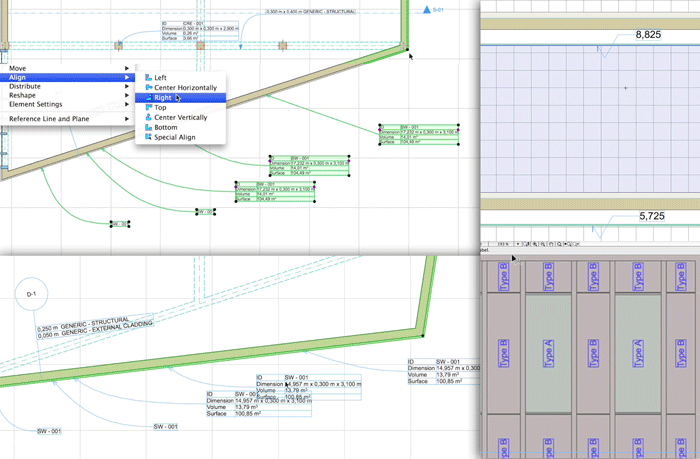 Labelling has been improved to help avoid confusing overlays

This is another great release of ArchiCAD with loads of crowd pleasers. Putting performance aside, changes to the interface, giving maximum model room, really makes a big difference and certainly helps make the most of a laptop screen.

There are a range of useful new features and capabilities ranging from small productivity enhancements to collision detection and IFC output.

Following Bentley and Autodesk, point cloud support is now the de facto standard in the industry, as more firms experiment with importing survey data to rapidly generate BIM models from real-world measurements. This is definitely a useful future technology.

The decision to work with Rhino and Grasshopper is also a no-brainer for getting complex forms into ArchiCAD. It saves the company developing computational design tools, as Bentley (GC) and Autodesk (Dynamo) already have done and Rhino is also exceptionally popular in practice.

Despite being the most mature BIM application on the planet, you have to admire Graphisoft’s commitment to driving performance and fundamentally re-architecting ArchiCAD to utilize the capabilities of multiple cores on both Windows and Apple OSX. BIM models are big and complex and as models get ever bigger and more detailed it’s important to use whatever hardware is available to accelerate this. When looking forward and knowing that processors will get more cores but single core performance won’t increase at the same rate, software has to be ready for this.

Autodesk Revit, which only runs in Windows, has some multi-core support, but these aren’t for discreet processes and apply to separate capabilities like rendering. A number of functions are multi-threaded (Save / Load etc.) but the software’s architecture is just not designed to work that way, which is a concern, considering the way the next generation processors will work. 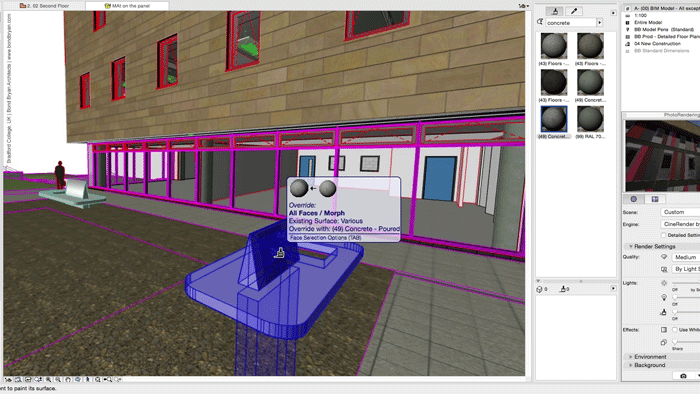 In a BIM discussion with an Intel employee we were told, “As processor clock speeds dip, you will see the number of cores greatly increase. We could have six or 12 cores minimum in the future. If you think of these like lanes of a motorway, software that just uses one core will be deciding to only use the inside lane, with all the other ‘traffic’ in your system. Software that needs to provide performance will have to make use of all the other lanes, as opposed to Revit stubbornly staying in the slow lane”. We wonder if Autodesk has any plans for a major reworking of the Revit code or, which seems more likely, it may bypass updating the software architecture of the desktop version of Revit and can get better model performance by leveraging a new system architecture in ‘the cloud’?

With 19, Graphisoft is certainly seeking to have ArchiCAD’s performance on big models compared to Revit’s. At the launch event Graphisoft’s ArchiCAD/Revit comparisons were very much at the forefront. Graphisoft showed its own benchmark results finding the insignificant’ improvement from Revit’s current multi-threaded capabilities and went on to state that ‘16GB is the minimum RAM requirement for Revit, while 16GB is the maximum you will need in ArchiCAD’.

For Mac users, ArchiCAD is a much more simple choice as there’s only two BIM modellers on the market that run on OS X – ArchiCAD and Vectorworks. But ArchiCAD 19 is the only multi core BIM tool that could justify the purchase of a lovely Mac Pro and make use of the cores on its Xeon processor.

From multi-threading to multi core

Multi-threading is a program’s ability to break itself down to multiple concurrent threads that can be executed separately by a computer.

Multi core processors. All Modern Intel desktop processors have multiple cores. Depending on the product there can be 2, 4, 6, 12, even 18 cores per processor.

In a dual processor system, which has 4 cores per processor, there would actually be 8 physical cores available.

In an ideal world, four cores would provide linear scaling of four times the processing capacity of one but most applications don’t see this kind of benefit.

Hyper-threading is a very specific technology from Intel, which aims to improve the parallelisation of tasks for software developers. Some applications use Hyper-threading, many do not.

In our example of a dual processor system, each with four cores (eight in total), the Operating System would actually see 16 virtual cores.

Hyper-threading is slower than actually having completely separate physical cores, as there are some operations which cause ‘collisions’ of system resources, which can negate the performance advantages and actually make it slower.

Software has to be written to get the balance right. When done well, speed benefits of around 15% can be achieved vs no Hyper-threading.