iKix was IndiaÝs first service bureau chain for architectural 3D printing. By encouraging model making at all stages of the design process, is helping take rapid prototyping technology to the next level and using it as a project management tool.

In his two decades in the computer-aided design industry, R. ÙParthaÝ ParthasarathyÝs first question to clients has always been: ýWhat problems can we solve for you?¯ ýGetting our projects to market more quickly,¯ is the inevitable answer.

3D printing helped highlight concerns about over-crowding in this urban residential project. As a result, and much earlier on in the design process, the architect moved a pool and fitness club into the centre of the site to ease congestion.

In the AEC world, Partha has discovered that projects are often delayed due to two main reasons ± inappropriate communication and lack of scientific project management.

Just two years ago, however, Partha discovered a technology that offered an entirely fresh way to compress time to market for architects and everyone involved in building projects: 3D printing.

3D printing could provide on-demand identical sets of three-dimensional physical models of buildings and communities at every stage of a project to every stakeholder. Partha instantly realised that this would dramatically improve communication, increase efficiency and eliminate costly errors. Thus was born iKix, IndiaÝs first service bureau chain for architectural 3D printing.

Based in Chennai, capital of Tamil Nadu, iKix serves top Indian architects and construction companies like Hiranandani, ETA Star and L & T South City. Though based in India, iKix is a global company. It accepts orders online and delivers models in the United States through its partner IDEAL Scanners & Systems. iKix has created about 200 architectural models for US customers alone.

Rising to the challenge

The traditional method for creating an architectural model is handcrafting in cardboard or Styrofoam. Because of the long lead time and expense required to produce such a creation, architects usually commission these models only when itÝs time to reveal final plans to the public.

iKix, however, can Ù3D printÝ a typical project in six to ten days, far less than the month that handcrafting a model requires, according to Partha. ýIn fact, we can print a model of a community of 1,000 acres ± including homes, schools, churches, temples, golf courses and more ± in six weeks versus five months for handcrafting the model,¯ he says. ýThe time and cost advantage is even more pronounced when plans change and models need to be modified on the fly.¯

3D printingÝs value stems from its breakthrough ability to print three-dimensional physical objects from 3D data. It operates in much the same way as a traditional office printer produces documents from word-processing data. iKix uses the Spectrum Z510 full-color 3D printing system from Z Corporation of Burlington, Massachusetts, maker of the worldÝs fastest 3D printers and the only ones capable of printing in multiple colors. 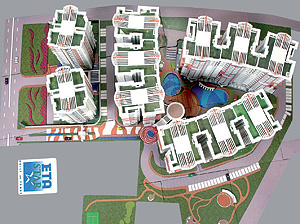 The Z510Ýs agility enables architects and project managers to quickly obtain multiple physical models of a project ± one for the architect, the client, the general contractor, the subcontractors and the civil authorities. ýA 3D printer is more than a prototyper,¯ says Partha. ýIt has become a project management tool.¯

The way we think

ýThe architecture community communicates in two dimensions only because there hasnÝt been a viable technology for readily communicating in three dimensions until now. 3D printing is a breakthrough that I believe will redefine technical communication for the next 200 years. Every design should be represented in 3D, and soon will be. It is my sincere desire that all architects move to 3D soon. Every customer of iKix has come back repeatedly for subsequent projects. They have found the benefits irresistible.¯

Consider a typical large residential community. It takes perhaps three months to design and 15 months to build. Two months into construction, with all trades working from 2D blueprints, the architect sees something amiss due to a misinterpretation of the plans: a misplaced wall or a staircase headed for a support column. The choices are 1) tearing everything down after 20 percent of the project is built, incurring major loss of time, labour and material; or 2) accepting the mistake and continuing construction. Neither option works. Handcrafted models donÝt solve the problem. They are approximations of the plan while a 3D printed model essentially is the plan.

ýWhat is intended in plans is often starkly different from what is executed,¯ observes Partha. ýThatÝs why iKix clients are commissioning 3D printed physical models from the earliest stages of the design and avoiding these catastrophes. Clients bring us in early and start making models from the concept stage, which is yielding project management savings in the three to eight percent range, which is huge given the size of their construction budgets.¯ Chander Seetaraman, CEO of CS Designs, a top design firm in India and an early iKix user confirms the cost benefits of 3D printing: ýThe value of the iKix models are really in the time and money saved due to cost and time overruns avoided. They pay for themselves right at the early stages of the project.¯

Partha offers the example of a recent urban residential project with hundreds of clustered units. The client was happy with the plans, but when he saw the iKix model, he immediately worried the units were too crowded together. The architect moved a pool and fitness club into the center of the site to ease the congestion. This is a solution that all parties would have otherwise missed ± until the buildings were halfway to completion.

Civil engineering projects need physical models, too, according to Partha. When officials are planning to build a highway overpass, for example, they must plan temporary traffic flows over the various phases of the job. Having 3D physical models for every stage eliminates confusion and improves construction efficiency.

The modular nature of iKix models, such as this freeway, makes them simple to pack, transport and reassemble.

Options and changes are easy

Unlike hand modellers, iKix is able to present clients with multiple options for projects at the earliest stages. ýIf you present a client with four design options,¯ Partha says, ýa client is likely to choose a fifth by requesting elements of the first four.¯ Not only can iKix print that fifth option on demand, clients can move 3D printed models of buildings, pools and parking lots around at will so they can reconfigure a design on the spot. ThatÝs because iKix purposefully builds its models in a modular fashion. Handcrafted models, by contrast, are fragile and glued in place, often with an off-putting Ùdo not touchÝ warning. The modular nature of iKix models also makes them simple to pack, transport and reassemble at different venues for different audiences. A model used for obtaining building permits, for example, can be packed up and reassembled in the sales office for prospective occupants to view.

Because 3D prints emerge directly from CAD data, they are more accurate than handcrafted models, and itÝs easy to make multiple copies ± almost unheard of in hand modelling. ItÝs also easy to scale models up or down without losing data.

iKix chose the Spectrum Z510 because of Z Corporation printersÝ unique ability to print in multiple colours. This is an essential capability for non-technical audiences as well as painting contractors, decorators and exterior contractors. Colour is also essential for applying labels and texture to models for maximum impact.

ýFull-colour, 3D printing offers so many advantages,¯ says Partha. ýIt communicates information directly in the way humans think so they can fully, deeply understand what the project will look like and what the project will be like. How can an architect not take advantage of 3D printing when it will save money and save time? I ask customers to just try it once. When they do, the benefits are overwhelmingly obvious, and they call us in from the beginning of the next project ± not as a vendor but more as a partner. Like the architect.¯ Remember, says Partha: ýProject efficiency decreases quite rapidly as the number of stakeholders increases. Proper communication is therefore key to managing projects well. iKix 3D prints are a great way to increase project execution efficiencies.¯