New design software is needed for an age in which modular buildings are built for off-site fabrication and then assembled on-site, according to Autodesk’s Jim Lynch

Modularisation can bring new efficiencies to construction, but it doesn’t mean that all modules must be the same. They can be mirrored configured and adjusted

To many working in AEC, Autodesk may just be ‘the company that makes AutoCAD.’ For those involved in BIM and the 3D world, their familiarity might extend to Revit, Civil 3D and BIM 360. However, the company is becoming a leading player in the manufacturing space, too – not just in design tools, but in its more physical aspects. This may even extend to helping to cut metal.

Autodesk spans a number of creative industries and its research and development activities have explored everything from biotech to aeronautics. With the overview this has given it, the company is in a strong position to see how digital design and digital manufacture are converging, in order to radically change the way we design and fabricate.

Mechanical engineering and plant design were the first industries to adopt 3D modelling and drive machines directly from design data – but it’s taken another 20 years for the AEC industry to begin adopting 3D-based workflows. In that time, new modelling tools, new digital fabrication processes and new types of automation have become available and, according to Jim Lynch, vice president of Autodesk’s Construction Products Group, AEC and manufacturing are now converging to change the way that buildings and infrastructure are designed, fabricated and assembled.

In the next 20 years, there will be two billion more people on the planet, as Lynch himself pointed out to attendees at Autodesk University back in December. “Imagine the infrastructure and buildings required support this size of population,” he said. “We have to ask ourselves, will the same old methods the best to meet this new demand?”

Lynch cited as an example a project from his own home town of Boston, Massachusetts: the Big Dig, more formally known as the Central Artery/Tunnel (CA/T) Project. It was meant to take six years to compete and instead took over two decades. The cost overrun was in the region of 190%. “We need to consider new ways of designing, fabricating and constructing,” he said. “Here, progressive thinking, innovation and determination are critical.”

The automotive and consumer products sectors, for example, must produce large amounts of high-quality products consistently and efficiently. The building industry should learn from that, according to Lynch – but for the convergence of manufacturing and construction to happen, there will need to be changes in the way components are designed, how they are assembled and how processes and data are managed.

These changes come together in the concept known as Design for Manufacture and Assembly, or DFMA. It focuses on improving throughput and efficiency in manufacturing and is already well-established in markets such as automotive.

But Autodesk believes it will work just as well in AEC, where mass customisation is often the name of the game. “Think of hospitals, hotels, schools, data centres,” said Lynch. “Today, we just don’t have a smart way of dealing with those repetitive structures in the design process nor in the construction process,” he said.

Autodesk’s thinking, therefore, runs along these lines: in order to meet rising demand without sacrificing quality or harming the environment, the building design process must consider more modular and standardised approaches and the Autodesk software tools used in building design must therefore support DFMA, “through codification, intelligence and logic”, so that buildings can be optimised for offsite construction.

In effect, designers will have a greater impact on how buildings are made and constructed – but they will need to adopt new methodologies, along with other projects stakeholders, including engineers, fabricators and contractors. 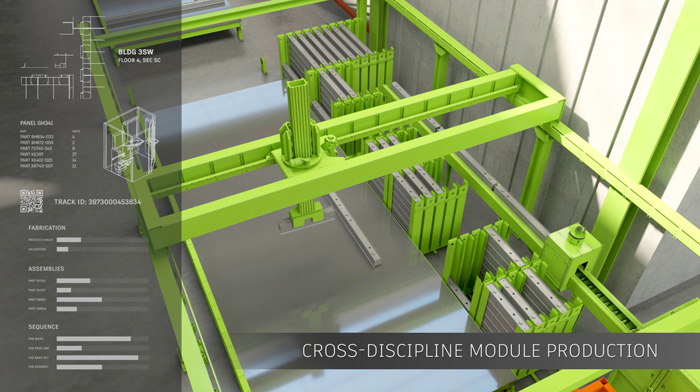 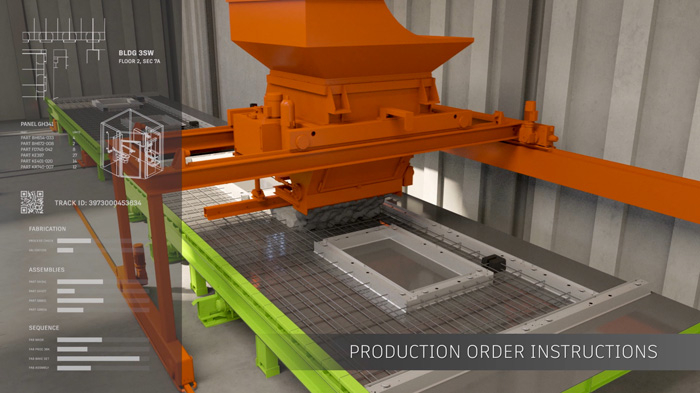 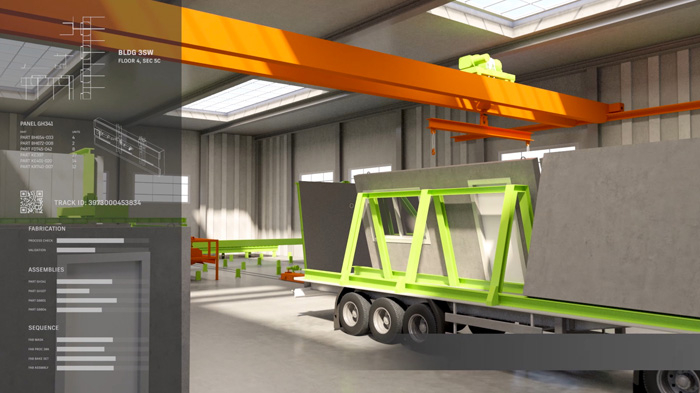 Offsite construction factories of the future will be producing multimaterial, multi-discipline panels and modules all in one place

As an example of new methodologies in modular construction, Lynch pointed to a hospital designed by the Oslo-based practice, Nordic Office of Architecture. This has a high degree of repetition in terms of floors, rooms and components. “Imagine if the architect could have a ‘smart assistant’, to focus on the design with regard to the way the buildings are built and delivered – an analytical tool that is based on input and previous experience, which helps designers create a library of standard, yet configurable, modules,” said Lynch.

“The process would start with conceptual parametric placeholders that are simple in geometry but extremely rich in data. This would play out through various different design scenarios and would also take into account estimation and procurement,” he explained. In later stages, the components might be further developed, to become more precise and detailed in terms of geometry and also supply chain data; but, Lynch insisted, “This doesn’t mean that all modules must be the same. On the contrary, modules can be mirrored configured and adjusted.”

Fabrication will change, too, with AEC factories producing multi-material, multidiscipline panels and modules. Machining processes will be automated, following ‘recipes’ and fabrication logic supplied directly from DFMA-empowered BIM data. Assembly instructions will be derived from these models, too, and manufacturing of modules will be sequenced in order to optimise factory efficiency while still meeting project deadlines.

There are numerous advantages to be had here, according to Lynch. “Compared with working on-site, off-site construction is safer and more efficient. It’s also easier to manage quality and ensure precision. Components created in these factories will have individual identifiers, such as QR codes, that allow for tracking and monitoring, from design to production to delivery, through installation.”

This, Lynch reckons, might all be done through a collaborative cloud solution. He pointed to Autodesk partner Manufacton as a case in point – a software-as-a-service (SaaS) platform where construction firms plan, track and manage prefab elements across all supply chain members, including detailers, procurement, shop foremen and field superintendents. 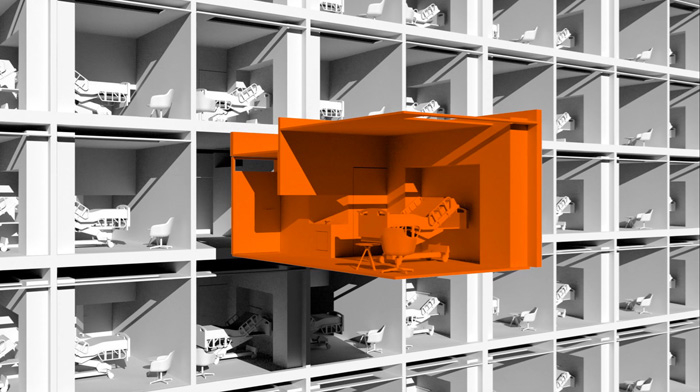 This hospital, designed by Nordic Office of Architecture, includes a high level of repetition in terms of floors, rooms, and components

Eventually, these modules must arrive on-site – but here too, Lynch imagines a far more factory-like environment than your typical building site, complete with assembly lines and robotic automation. At Swiss technical university ETH Zurich, for example, researchers can demonstrate bricklaying robots. Meanwhile, research into 3D printing of building structures or even whole buildings is coming along, as new materials such as concrete clay and polymers become available. And self-driving technologies are coming to heavy equipment, thanks to the work of companies such as Built Robotics.

While some of Lynch’s predictions may seem fantastical, it’s fair to say that all the elements for this vision are in place – if not in the AEC space, then certainly in manufacturing.

Moving to BIM and 3D modelling will be a step in the right direction for companies in the AEC space, because the digital model is the foundation of almost every downstream process, but it’s already clear there will be far steeper hills to climb ahead.

Not least of these are the ‘soft’ issues that need to be addressed in terms of design approaches. Modular and component- based design comes with constraints and the need for discipline. For some, they may cramp creative freedom.

Likewise, demand must be there in order for setting up new factories to be a worthwhile exercise. The lumpy boom and bust cycles that plague real estate could make it hard for such factories to remain consistently busy and profitable.

Still, despite the barriers, Lynch was keen to present DFMA as “the future of construction” and a source of huge opportunity. He even went as far to issue a warning to those who don’t embrace it, hinting at a future of irrelevance.

“Just think how robotics and automation have changed automotive production and the resulting improvements in the cars we drive today. Think about the automotive manufacturers that embrace the new technology, who are reaping success, and those that haven’t, who are not.” 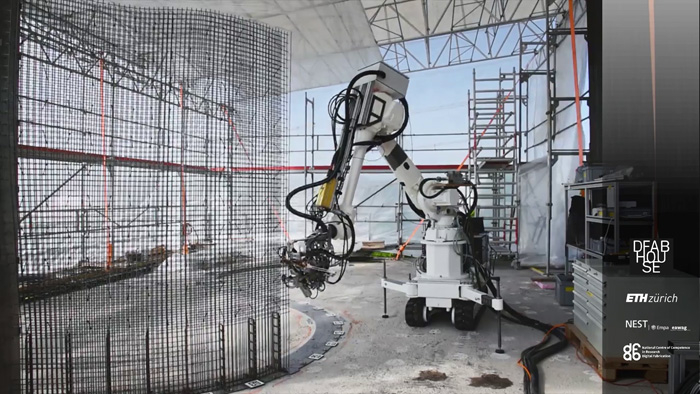 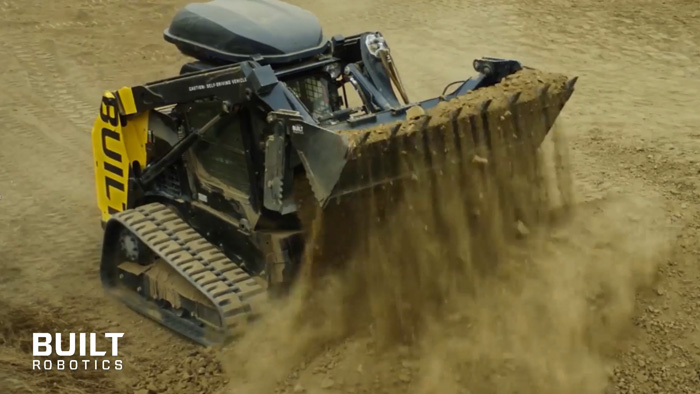