Working on heritage buildings poses major issues – how to bring the existing structure into the 3D BIM process and the requirement to record and retain many architectural features. Plowman Craven explains how it overcame these challenges with the regeneration of Kings Cross in London

Many in the AEC arena will see new buildings as the main application for Building Information Modelling (BIM) but a considerable percentage of projects are refurbishments or part developments of existing buildings, many are listed.

Heritage buildings pose two major issues — how do you bring the existing structure into the 3D BIM process and the requirement to record and retain many architectural features.

A project that Plowman Craven has been involved with for over a decade is the urban regeneration of Kings Cross, a large mix of new build and listed buildings. A project in which the King’s Cross Central Limited Partnership (KCCLP) wanted to embrace 3D delivery and more importantly have a BIM approach on a site that had over 20 historic buildings.

People travelling into London from around the world will be fully aware of the regeneration that has happened around King’s Cross and St Pancras. It has become a destination rather than a place to pass through, whether you are interested in iconic structures such as the St Pancras Renaissance Hotel or the spectacular western concourse ceiling, designed by John McAslan and partners, or a Harry potter fan wanting your photo taken on platform 9 ¾.

What is really impressive though is the exemplar 67 acre site owned by the KCCLP adjacent to the two main transport hubs. It is the largest mixed use development in single ownership to be developed in central London for over 150 years.

An inaccessible area of London that consisted of disused buildings, railway sidings, warehouses and contaminated land that has now been transformed into a vibrant new quarter of offices, homes, community facilities, schools, a world-renowned university plus shops, restaurants and cultural venues. One of the real unique features of this development, and as mentioned above, it has a large number of historic buildings set alongside new build and public spaces.

KCCLP, as the major developer and asset manager, from the beginning were very progressive in their approach to requiring complete data sets, improved collaboration between people involved in developing and managing their assets and the application of BIM.

One of the key elements was to have an up to date master set of 3D geo-spatial information, including management of the primary survey control, which could be utilised and supplied to relevant parties thus reducing the need for repeat or unnecessary additional surveys.

The complexity of the site meant it was critical that all aspects were tied to a recognised grid and datum including correlation with underground utility information and below ground infrastructure such as rail and underground tunnels.

The historic buildings on the site posed a specific conundrum — how do you get these complex and varied buildings into the 3D design world? We would be dealing with large structures such as the transit sheds through to the irregular shaped Gas Holders.

3D laser scanning technology has been used as a surveying tool for a considerable number of years and in the early days of this project, the data, although collected in 3D, was delivered to the architects and engineers as 2D drawings. There were a number of factors which drove this at the time:

Stakeholder ability or familiarity working with ‘as built’ parametric models.

As the awareness of the benefits of BIM grew, software and hardware development increased, there became a greater understanding of the tools available and their application.

The first building to be delivered as a ‘BIM ready’ 3D Revit model was the Midlands Good Shed, built in 1850 by the Great Northern Railway, and now sensitively being restored to house a new Waitrose store and cookery school, plus an events and cultural space for the Guardian Media Group.

This survey model provided the basis of a fully federated model, hosted by BIMXtra, and included new steelwork elements added by Arup, 3D models from the architect Bennetts Associates, steelwork fabricator Bourne Steel, main contractor Kier, and M&E consultant Hoare Lea. With the number of stakeholders involved in the project, each with different requirements, it was important from the outset to fully understand and make sure that the survey model met expectations. Key considerations included:

Collaboration with each team to understand specific requirements — As there was no recognised professional body specification we developed our own 3D BIM Survey Specification which was used to establish the level of detail required, family structure and delivery method.

Model sizes and understanding capabilities of stakeholders in handling ‘point cloud’ data — With buildings of this nature structural features are not always orthogonal and will have deformities such as warping, bowing or leaning. To model every one of these deformities made the models too large and also works at the limits of Revit capabilities as it is primarily a design tool. Lateral and vertical deviation parameters were incorporated to record the maximum deviation of the model element from the point cloud. View filters could then be used to indicate components which are outside of tolerance. This then enabled the user to bring in the point cloud data for this feature and understand in greater detail the surface variations.

Structure of the model could be phased and additional information added as the project progressed.

In specific circumstances there may be consideration of complex architectural features to be recorded — Intricate modelling of these features may be required. These would be modelled in other more appropriate softwares and brought into the Revit model as families, non-modifiable, as to not make the model overly heavy. 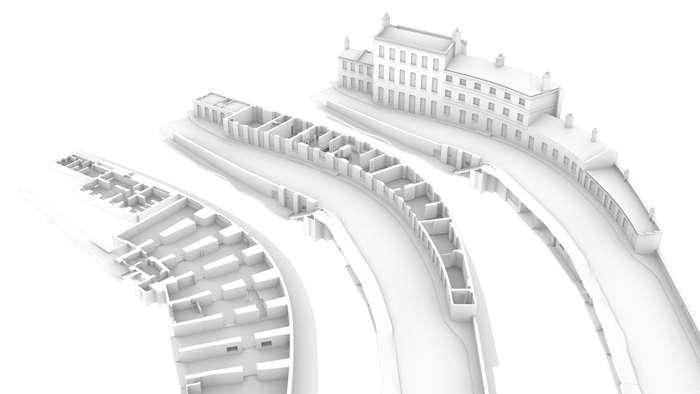 Revit model of the Fish and Coal Building on Regent’s Canal at King’s Cross. The building will be used by the Jamie Oliver Group

The Midlands Good Shed project is near completion and many of the lessons learnt have been incorporated into the other schemes such as the Fish and Coals Building, to be used by the Jamie Oliver Group, and Coal Drops Yard, a new retail destination. These have been fully 3D laser scanned and ‘BIM Ready’ models produced for the design and engineering teams. Bam Construction, which won the project to refurbish the Fish & Coals, has fully adopted a BIM approach and utilised the models to co-ordinate designs, service clash detection and onsite verification. In relation to data collection and model delivery key considerations such as:

Technology compatibility were continually reviewed and addressed with all stakeholders.

Pure restoration has been a major consideration for KCCLP, the developers, and in 2011 Gasholders No. 8, together with 10, 11 and 12, built in the 1850s, were dismantled by a team comprising Arup, Bell Phillips Architects, Shepley Engineers and BAM Nuttal.

Before the dismantling every structural element was recorded utilising 3D laser scanning technology and modelled.

Due to the shape and intricacies of the gas holders this was the only technique that really could meet the tolerance and timeframe requirements.

It took two years to complete the restoration of Gas holder No 8, rebuilt and placed on the new site next to Regents Canal.

In other locations the combination of digital photography and scanning technology has enhanced the capability to depict reality in 3D — a technique used to meet English Heritage’s requirements to show the existing true condition of the Coal Drops. This was achieved by wrapping high quality digital photography over a 3D model.

Utilising 3D digital data capture technology such as laser scanning and photogrammetry has provided the capability not only to accurately record intricate heritage features but has enabled, on a large urban regeneration project, to bring the existing environment into the BIM process. It has provided a geo-spatial platform to assist in KCCLP’s proactive application of the BIM process which is continuing right through to asset management and the ability to provide a better service to their occupiers and investors.

Other articles of interest from Plowman Craven:

The black art of laser scanning

In pursuit of cool

As the surveying industry develops, a greater number of ingenious applications of the technology are making waves. To read this article, click here.