Hosting multiple events simultaneously the Vancouver Convention Centre has uniquely complex delivery needs. But with the help of AutoTurn the transportation consultants on the flagship project were able to design the basement loading court with confidence.

Figure 1: the swept path for a WB-20 manoeuvring within the confines of the columns and loading ramps.

The six-acre living roof and the harbour view with the mountain backdrop are perhaps the most talked about features of the recently opened Vancouver Convention Centre West facility. The new building truly is a masterpiece of design, inspiration and sustainability. The commitment to green technology is everywhere, from the landscaped living roof, seawater heating and cooling, on-site water treatment and even the fish habitat built into the foundation. Deep down this expansion facility is more than stunning structure, it is a building that really works.

The iconic sails of the Vancouver Convention Centre have been a striking feature of Vancouver’s Downtown waterfront since Expo 86. As Canada Place, a name it is still known by, it served as Canada’s Pavilion and entertained the world. However, the name Canada Place was not only applied to the part of the complex with the sails, but it describes the entire mixed-use commercial facility which is home to Vancouver Convention Centre East, the Pan Pacific Hotel, Port Metro Vancouver Corporate Offices, the Cruise Ship Terminal, the World Trade Centre Office Complex and an expansive parking facility.

The sails are still there, but after five years of planning, building, and rooftop landscaping, the new Convention Centre West building, adjacent to Canada Place, has tripled the size of the convention facilities. It now covers 1.1 million square feet (about four city blocks) for a combined total of 473,523 square feet of pre-function, meeting, exhibition and ballroom space. The Vancouver Convention Centre hosts multiple events simultaneously, each with their own separate access and function spaces. Because of this capability, and that the building is partially built over Burrard Inlet, the facility has to handle uniquely complex delivery needs.

Although it is a side that the public seldom sees, it was the basement loading court that presented some of the greatest access design challenges. Typical of high density urban locations, goods loading all happens below street level and under structure. Having loading areas under street level contains the noise and minimises the visual intrusion of large delivery vehicles. However, it also presents unique manoeuvring challenges for those mega trucks within building confines.

To accommodate the needs of the new facility, 24 loading bays, 18 of which had to accommodate up to a WB-20 design vehicle — a 22.7 metre long tractor semitrailer — was required. To further complicate matters, three ramps were needed to connect the loading court area up to the exhibit hall level, providing large truck access directly into the exhibit hall areas within the building.

Figure 1 shows the swept path for a WB-20 manoeuvring within the confines of the columns and loading ramps in part of the Convention Centre loading court. This illustrates how the angled bays were aligned within the 13.6 metre column spacing and how trucks still have space to U-turn.

Before the days of computerised swept path design, designing this part of the facility would have been a slow iterative process using turning templates. With Transoft Solutions’ AutoTurn, vehicle swept path analysis and turn software, it is possible to replicate standard or custom vehicle types. This includes the ability to simulate realistic turning manoeuvres with front and rear steered vehicles. 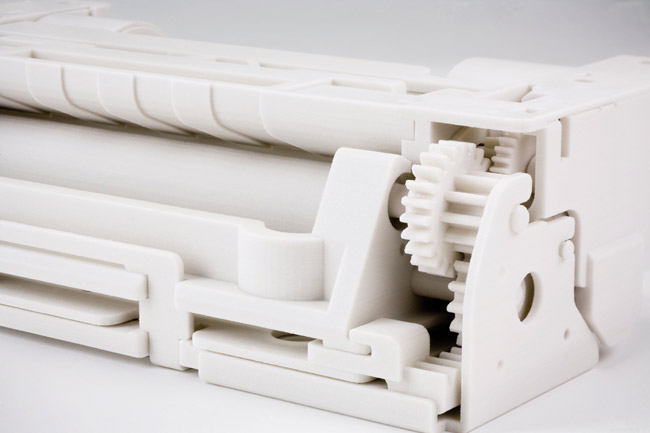 “Efficient movement of large trucks through the loading court facility is essential to the successful move-in/move-out of large exhibitions and with the assistance of AutoTurn we were confident that we had a good design,” says Peter Joyce, president of Bunt & Associates Engineering, transportation consultant to the Vancouver Convention Centre Expansion Project.

Even the most challenging vehicle access projects, like the Convention Centre, can be easily navigated in AutoTurn. The ability to perform intricate vehicle movements from a wide array vehicle types reliably delivers the ideal layout. And not just for loading bay design — intersections, roundabouts, bus terminals all benefit from this application.

The West Building of the Vancouver Convention Centre was opened in 2009 to critical acclaim. In February it will face once of its biggest challenges as it hosts the international media and broadcast centre for the 2010 Winter Olympics. Even with the complex logistics of such an event the organisers will be confident they will be able to deal any access clearance and manoeuvrability challenges that come their way.