This Ùfast trackÝ 22 month contract for the construction and completion of the 52-storey twin towers, part of the Mohammed Amin Al Kazim project in Dubai, was detailed by Gulf Steel Industries in less than three months using the StruCad 3D modelling system from AceCad Software.

The Al Kazim towers project which has recently celebrated its Ùtop outÝ (Week 52) features three basement levels, a ground floor and an eight storey podium plus two 52-storey towers rising 44 floors above the podium to a height of 203m. Rising above the towers are two aesthetically-designed roofs Ùtopped outÝ at 265m. These iconic towers will include residential, office and commercial space and stand in a very strategic area near the fifth interchange on DubaiÝs Sheikh Zayed road. With parking for almost 2,500 cars on the basement and podium levels, the towers are built on a massive land scale catering to the needs of the business community of Dubai Internet and Media Cities. 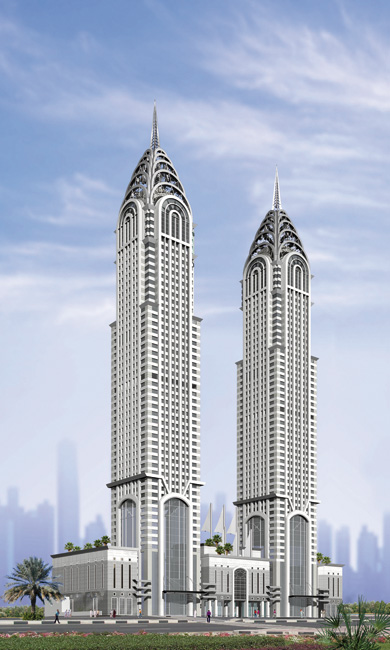 The spectacular roof structure of each tower consists of approximately 1,200 tons of steelwork formed into intricate arches to echo the lines of the world famous Chrysler Building in New York. The design was modelled entirely on StruCad and according to Head of Engineering for Gulf Steel Industries, Mr KG Surendran, Ùenabled the project to be delivered in less time than anticipated and with accuracy to meet and exceed the clientÝs requirementsÝ. As a result of the collaborative nature of StruCad, links with analysis and design packages such as Staad Pro were simply facilitated. The StruCad database enables the bi-directional transfer of design data streamlining the engineering, design and detailing functions, whilst fabrication data is automatically generated by the system.