Through its adoption of AutoCAD MEP, the building services-specific version of AutoCAD, Haden Young was not only able to cuts its design cycle by weeks, but dramatically improve co-ordination.

By modelling its designs in 3D Haden Young is able to check everything is in the right place much more easily.

We expected our first job using AutoCAD MEP (formerly Autodesk Building Systems) to take longer than usual. In fact, it took the same amount of time – and we did so much more,Ë says Phil Holland, CAD manager, North West area at major building services contractor, Haden Young. The company is gradually rolling out the software across its UK offices and is finding it offers many efficiencies over previous methods of working Ê particularly the way it improves co-ordination. 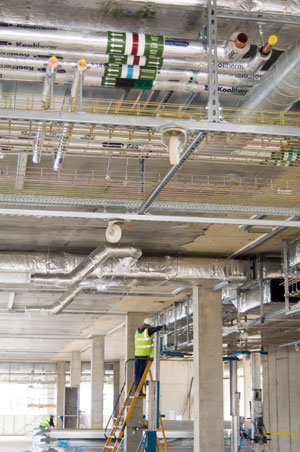 But Haden Young is keen to test AutoCAD MEP to the full. It is now well on the way to being the first UK contractor to customise the solution for its own requirements and also the first to link it with fabrication spool drawings. Early testing has proved this is entirely possible and that it could save around two weeks in fabrication DWG production times.

With over 1,600 staff and operatives operating out of four regional organisations with ten offices across the country and major sites, Haden Young is one of the leading building services organisations in the UK. Offering extensive building services expertise in air-conditioning, heating, plumbing and fire protection installations, together with power, lighting, data, security and building management systems, Haden Young works with some of the country’s biggest construction companies, as well as many commercial, industrial and public sector clients.

Holland explains how his team in the North West were using a combination of AutoCAD and 3rd party software. This worked well, but when it came to upgrading, they discovered there were advantages to combining the two functions in the one software.

“AutoCAD MEP could do the job for one subscription cost only,” he says. “And, from a workflow point of view it eliminates the need to keep re-creating data and for time-consuming manual input.

“At first we were looking for a good co-ordination tool to enable us to check the way the different services fitted together and that there were no clashes,Ë he adds. ¤It was clear that AutoCAD MEP would do this for us.”

Holland began by implementing six seats at the Warrington office and soon increased this to ten. Haden Young’s Tamworth office followed close behind.

His colleague, Pete Wakeman, the CAD manager at Tamworth explains: “In reality, the experienced CAD co-ordinator has always thought in 3D. However, previously it was difficult to recreate that image in 2D format. 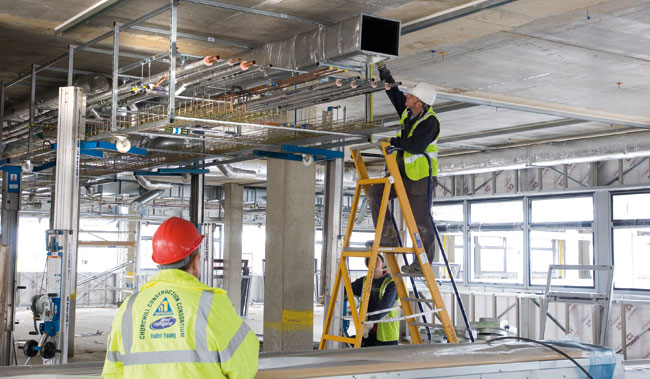 “Using AutoCAD MEP gives you great spatial awareness. For example, the first job we used it on was a new plant room at the Addenbrooke’s Hospital in Cambridge. We used the architect’s design as a base and created a 3D model which made it far clearer to us how everything fitted together.

“As a result we could view the entire design as a whole and also from various angles. Now we can even do walkthroughs which enables us to see the design in a different way and really check that everything is in the right place.”

Haden Young works in a complete range of sectors, including education, commercial, industrial, leisure, sports and retail. However, at the moment, hospitals and other healthcare buildings feature highly in its project portfolio and the company is part of the NHS ProCure21 partnering programme which encourages best practice and excellence in design.

¤From Warrington we began by designing the building services for a new day case theatre at the Blackpool Victoria Hospital. Out of this came a series of other hospital projects such as a cardiology and surgical unit at Stepping Hill, Stockport and other major sites,Ë says Holland. ¤AutoCAD MEP has come into its own on these projects.Ë

¤Working on the Blackpool project we were able to model up the structure of the building so we could check co-ordination. This was a level of validation that we wouldn’t be able to reach with a traditional CAD drawing.

¤There were occasions when AutoCAD MEP change management was a real life-saver. On one job, the builders wanted to reduce the ceiling heights. Previously this would have been an extremely time-consuming task, but using the solution’s automatic co-ordination, it was both straightforward and accurate. The model also highlighted the areas where the new dimensions wouldn’t work and we were able to adjust the design accordingly.

¤It has also helped us demonstrate co-ordination issues at the tender stage, which helps when costing a project.Ë

Pleased with what the team were achieving with the new solution, Holland demonstrated AutoCAD MEP to other offices, showing them how it could help save both time and money. The Tamworth office now has around 16 licences split between themselves and the Bristol office and this year, Haden Young bought its two Scottish offices and the Leeds and Newcastle operations on board.

Since it began working with the solution, Haden Young has launched Modular Systems +, the company’s off site building services module manufacturing operation. ¤We’re currently creating a catalogue of our actual fittings rather than generic ones and aim to get to a point where we can get actual material listings from the model.

¤This is going to save an exceptional amount of time. At the moment the calculations and ordering are all done manually which adds many extra man hours to the project and also introduces the potential for human error. With faster and more accurate fabrication drawings we can order sooner and more precisely, giving us a big advantage,Ë says Holland.

It is clear that Haden Young has recognised the potential of AutoCAD MEP and will continue to build on significant, early gains. This includes, not only cutting the time to produce fabrication drawings by weeks, but also taking advantage of the head start in ordering this allows. They can truly say that AutoCAD MEP puts them in front of the game.