Understanding how temporary works will be incorporated in a construction sequence as early as the strategy phase can improve project delivery and even help contractors to win tenders, writes Paul McLaughlin, Mabey Hire

Temporary works form an inte gral part of many construction schemes; whether that’s the façade retention of a listedbuilding front while work continues behind, or the shoring and bracing of large groundworks excavations. .

With temporary works contributing a significant amount of the total construction cost, it is evident that the efficiency of its delivery will often prove vital for the overall project success. That said, digitisation and BIM have historically only been considered for the permanent works design, despite the great benefits that can arise from the implementation of BIM throughout the entire construction sequence, including both temporary and permanent – an issue that we at Mabey Hire identified several years ago.

To put it in the timeline context of a Digital Plan of Works (DPoW), more often than not we are seeing temporary works being incorporated on large construction, infrastructure or commercial development projects as late as Stage Four (Design) or even Stage Five (Build). Understandably, being considered so late on in the construction sequence has the potential to cause considerable issues, for the temporary works provider, contractors and indeed the project as a whole.

By such late stages of a project, the 3D model of the proposed structure will likely be well-developed, or even completed. While the detailed model will provide the temporary works specialist with a high level of information and data around the project, the model will often have to be stripped back in order for the temporary works to be correctly and efficiently designed and incorporated within. Modelling the temporary works required when the superstructure has already been modelled above can make it a more time-consuming process, as well as being difficult to visualise how the temporary works will fit into the overall building design and construction sequence.

With temporary works often being required on a project either before the permanent works begin or as a means of assisting and facilitating the construction process, the two should either be considered in the appropriate sequential order or given the same level of precedence. The advantages of considering and visualising temporary works at the initial strategy or concept stage of the DPoW can be huge, with the benefits felt throughout the whole project.

Perhaps the most apparent and overriding benefit of visualising temporary works at the early stages of a construction sequence is the ability to make early design decisions and achieve a betterinformed overall design stage as a result. This provides project teams with the ability to identify potential issues early on and take a proactive approach to solving them. In comparison, limited visibility of how the temporary and permanent works would work and perform together could result in design teams being forced to react as and when they occur, potentially under time-critical pressures.

Ultimately, using BIM to visualise a project’s temporary works provides improved confidence and certainty in highly complex design programmes, with the 3D model and accompanying data contributing towards a ‘digital rehearsal’ of the works. Here, every component can be fully considered, designed and analysed to ensure its constructability, as well as maximise on the efficiency of the overall design, prior to the commencement of any work on site. This is especially key considering the significant upheaval that can be caused should the temporary works design not have been correctly or fully incorporated within the early stages of a project. For example, design issues or component clashes could both potentially result in severe time delays or the need for rework on site, causing a whole project to effectively come to a standstill. 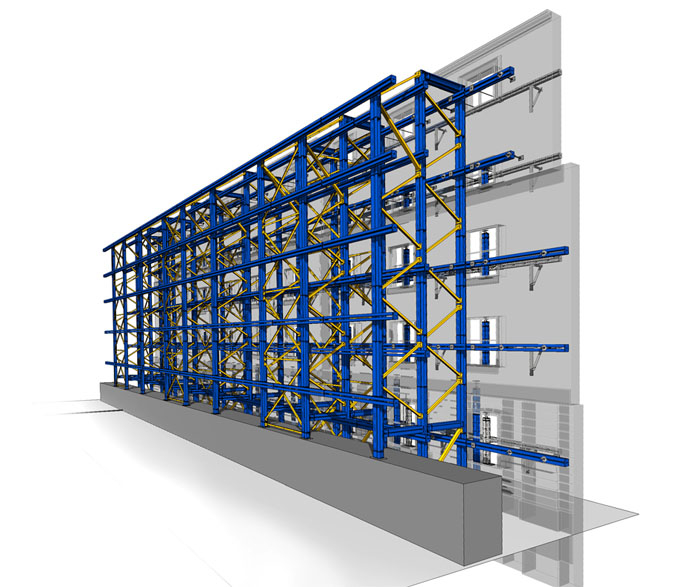 This ‘digital rehearsal’ can also provide substantial benefits from a health and safety perspective. Not only will having a clear visualisation of the proposed temporary works from an early project stage allow contractors to identify and mitigate potential site safety risks but can also provide installation teams with a virtual walk-through of the site prior to construction commencing, meaning that they’re already familiar with the works and conditions.

Incorporating temporary works at the strategy stage of a project’s DPoW isn’t only about the practicalities and efficiencies of delivering the design. It could also even help contractors to potentially win project tenders, for presenting the prospective client with a BIM model of the temporary and permanent works not only improves visibility of the proposed construction sequence but it also showcases the technological skill of the project partners, providing assurance of a coordinated and efficient approach.

Full coordination and visibility on any construction project is key. Much attention has been recently placed on how digital technology, such as BIM, information management platforms and mixed/virtual reality, can contribute to the creation of a streamlined, efficient and collaborative workflow. However, how can this vision be achieved if a significant portion of the works are not being considered at the most beneficial stage? Put simply, it is imperative that all project elements, whether they be temporary and permanent works or steel and concrete, are considered as one, providing all parties with a full and comprehensive overview of a project. This is why a Common Data Environment is so beneficial; a platform, usually cloud-based, where all project parties, both temporary and permanent works related, are able to provide, review and share project data – data which is then controlled and conveyed across all stages of the DPoW. 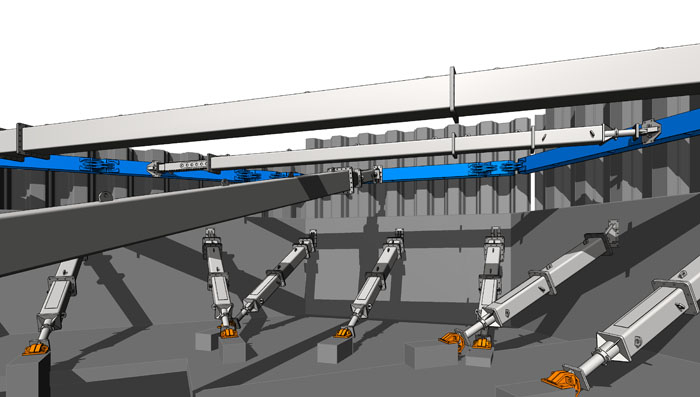 Due to its very title, temporary works can perhaps be seen as being transient, short-term or of less importance; when in fact they are often the works that enable the permanent to be carried out. The potential consequences for neglecting to consider the temporary works until a late stage, compared to the advantages of designing and visualising temporary works at the strategy or concept phase and early contractor involvement, are widely evident. Perhaps it is time, therefore, for there to be a shift in view amongst the BIM and construction industry.

Mabey Hire presents itself as the only temporary works specialist to have received the BSI ISO- 19650 accreditation. The company primarily uses Revit and Navisworks for the design of its clients’ temporary works