The idea of creating scale models out of materials cured by lasers used to be the stuff of science fiction. But one company is already pushing the boundaries of architectural model making with its groundbreaking Rapid Prototyping technology

Architectural model making has undergone a revolution in the past few years. The ability to create scale models directly from 3D CAD data in a matter of hours is a reality and the technology is currently being used by key architectural practices for the creation of proposed and as-built designs. One of the pioneers of this technology in the UK and throughout the world is ARRK, whose European Rapid Prototyping Headquarters is based just outside of Gloucester.

Rapid Prototyping, as the name suggests, is a group of technologies used to create physical prototype models in a short space of time. The technology has been used extensively in product development and automotive design for a number of years, but its level of adoption by the architectural sector is still, by comparison, relatively low.

Looking to broaden its already impressive reach across many industry sectors, ARRK began focussing specifically on the architectural market 18 months ago. Since then key architectural practices including Zaha Hadid, KPF, Wilkinson Eyre, and Grimshaws have joined the company’s distinguished client list, with ARRK producing a whole assortment of architectural scale models ranging in size from that of a matchbox to a kitchen table. So how exactly are these models made?

There are two key technologies that ARRK employs for the production of its architectural models. These are Selective Laser Sintering (SLS) which forms models from a fine powder and Stereolithography (SLA) which creates models from a liquid resin. Both technologies deliver different results, and their application depends on the requirements of the client. SLS, for example, is ideal when interior details are required within a structure, but because it uses powder its surface finish is a little rough. SLA, on the other hand can provide excellent surface definition and see through models, but the resin-based material can also be brittle and sensitive to warping under heat.

The actual model production process is different between SLA and SLS, but the key concept that unites both technologies is that models are built up layer by layer using a laser to cure the build material. For each thin covering of powder or resin that is laid down a solid is formed only in areas where the laser comes into contact with the material. At the end of the build process the material that hasn’t been cured by the laser just falls away revealing the finished model. 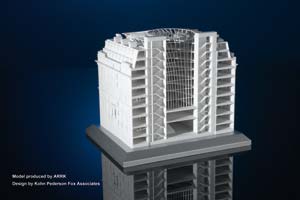 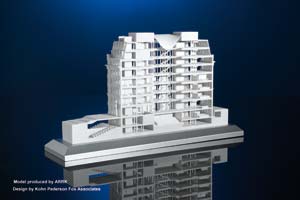 It’s worth noting here that for SLA models supports are often required to keep the model in place during the build process. These temporary lattice structures, which act a bit like scaffolding, are made out of the same resin as the model but are easily snapped off after the model has been built.

Supports are not required for the SLS process as the uncured powder is able to hold the model in place, much like a spoon in a bowl of flour. This is one of the reasons why SLS is often preferred for architectural models, as it is easier to build interior details within a structure without supports (the current split in architectural model making at ARRK between powder-based SLS and resin-based SLA is somewhere in the region of 65:35)

For model production, a degree of hand finishing is often necessary after the build, particularly for SLA models to smooth the surface or to hide marks made by layering or supports. Some clients also require additional finishing on their models such as paint jobs or specific textures.

In terms of single build volumes, ARRK currently has a capacity of 500 x 500 x 500mm for single SLA models and 400 x 340 x 270mm for single SLS models. However, like many Rapid Prototyping bureaux the company commonly joins multiple models together if a larger model is required. Finished models are expertly packed and can be sent out by courier all over the word, or even hand delivered if they are particularly large or fragile.

If you want to find out more about how the specific SLA and SLS technologies works go to prototype magazine’s website www.prototypemagazine.com, an excellent resource for all matters related to Rapid Prototyping, and one of AEC magazine’s sister publications. 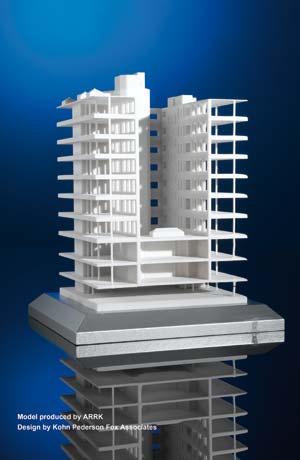 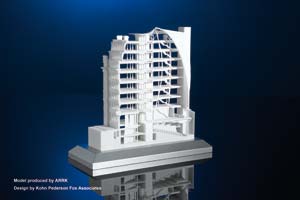 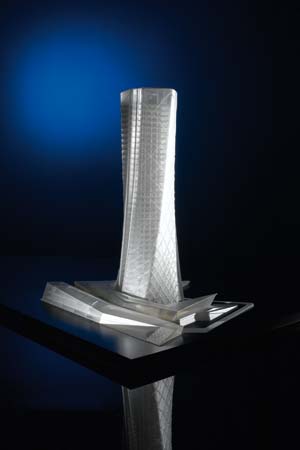 ARRK can provide a budgetary quote from something as simple as a sketch and an XYZ dimension, but for a more formal quote (and of course in order to build your physical model) 3D CAD data is required. This can be sent to ARRK in a number of formats but the industry standard Rapid Prototyping format, STL is by far the most common, but it should be noted that not all 3D CAD systems produce good STL output.

To help with the process of data production, ARRK runs CAD schools with clients to teach them the best way to export data from a wide range of 3D CAD applications. These sessions also include tips on the most effective way to build 3D CAD models specifically for Rapid Prototype model production.

“We teach our clients the importance of creating separate models for building design and rapid prototyping,” explains Craig Vickers, Operations Director, ARRK. “A classic example is the client who designed a 100m high office block and wanted to create a 1m high scale RP model. They simply scaled their model down in their CAD program which resulted in the walls having a physical thickness of one micron, which is too small for RP models (this is currently limited to 0.5mm). Naturally we were able to rectify this, but if the customer’s data is right first time, it will streamline the whole process, reducing turnaround time and of course cost.”

Of course one of the major attractions of this technology is the extremely quick turnaround times, which is a major selling point for ARRK when offering up Rapid Prototyping as an alternative to traditional model making.

“While traditional model makers may take weeks, the average turnaround for projects is two to three days,” says Craig, Operations Director, ARRK, “and everyone is quoted within 24 hours, and most within eight.”

In addition to turnaround time, the relatively low cost of models is a major draw for many clients. Models can cost anywhere from tens of pounds to thousands of pounds depending on size, which is the primary driver as this dictates the amount of machine time. Other factors that affect cost include amount of surface finishing, and any required textures or painting. These post processes are all done by hand in house by extremely skilled labour, which is in contrast to the various automated Rapid Prototyping technologies used for actual model production.

With 12 SLA and 3 SLS machines in house ARRK’s European Rapid Prototyping Headquarters is set up to deliver a quick turnaround time for urgent jobs. However, for those where time is not such an issue, ARRK can also offer discounted rates, a service which, not surprisingly, is particularly popular with students. In addition ARRK also offers Polyurethane (PU) and foundry castings (in aluminium and zinc), for the creation of short batch runs for actual architectural fittings such as specialised door handles.

When you consider the turnaround time and cost, the quality of models that ARRK can produce with its in-house RP technology is astounding. Intricate details are no problem, and slender structural frames can be produced with ease with no impact on build time. In addition, the company’s attention to detail at all stages of the model making process is incredible, and the enthusiasm that is evident throughout the whole team for solving new build problems, such as those encountered in new areas of Architectural model making, is refreshing.

So with services such as these available what does this mean for the traditional architectural model maker? I have no doubt that RP technology has the ability to replace traditional techniques in various areas of industry, as it has already at many of the top architectural firms. And, while some may feel that the human element and individual style is lost by using these technologies, the cost and time benefits of RP cannot be ignored. And it’s these two factors alone that look certain to push RP model production in the architectural sector to new heights in 2006.