Over the past three years, digital technical documentation software and collaboration tools developers have carved a niche in the design industry. As CAD systems have expanded from 2D to 3D, encompassing increasingly rich streams of project and ÙmetaÝ information, there has been a corresponding requirement for ways in which to effectively share and express these rich ideas to teams and suppliers, both locally and globally.

AEC models can now be imported into Acrobat via support for the Industry Foundation Class (IFC) format.

Adobe believes that for every document creator, there are, on average, 50 consumers of that information.

The PDF (Portable Document Format) was born in 1991 out of the invention of PostScript, a format that Adobe invented to enable the easy printing of graphics and text in a Ùdot matrixÝ computing world that had no printing standards. PDF has grown from this standardised description of text and graphics to be a digital equivalent to printing because you can create a PDF from nearly any application and be sure that whoever you send it to will be able to see the layout as intended. By continually adding support for professional applications and many different proprietary formats, PDF has become an extremely rich communication medium for project information irrespective of source.

For the last three versions of Acrobat, Adobe has focused considerable effort on its support for 3D CAD standards, specifically in manufacturing. With the release of version 9, it has added emerging 3D AEC (Architecture, Engineering, Construction) and Geospatial formats. Adobe also appears to have settled into a yearly release cycle for new versions of Acrobat, with the last three versions being released from May to July after an extensive open beta program.

The Acrobat 9 family consists of Acrobat 9 Standard, Acrobat 9 Professional, and the new Acrobat 9 Professional Extended software. The latter has replaced the Professional 3D branding but still offers the most comprehensive suite of tools for 2D and 3D designers. While the Extended brand harmonises the naming convention with AdobeÝs popular Photoshop Extended image manipulation tool, dropping the Ù3DÝ might be confusing to Engineers and Architects who associate it with AcrobatÝs CAD version. It may be a marketing ploy, but the news is that Extended is the new CAD flavour.

Since Adobe bought Macromedia, the Flash format has managed to work its way into the majority of Adobe products. This time round it is AcrobatÝs turn to benefit and the addition has really enhanced both the process of creation and the experience of exploring through multi-document PDF. Flash may be considered a web-based technology, but it is actually a powerful visual operating environment in its own right and liberates Acrobat and PDF from very ÙstaticÝ front ends.

In Acrobat 9, Flash is used to capture and embed video, as well as enhance the delivery and navigation of packaged multiple files within a single PDF. Here, files can be added into a ÙportfolioÝ, through a slick Flash interface. Portfolio is the new term for compiled PDF documents and they are really pretty cool.

It is now easy to create a single PDF file that contains all types of documents with the polished Flash front-end page that includes a title page, displayed on opening the PDF. The Flash environment radically improves the experience of wading through a multi-document PDF. Each file can be flicked through as if it were on a carousel (think Apple iPod Touch, or iTunes).

The new video feature is great too, as Flash is very efficient at compression. The Video tool lets users import files in a wide range of formats including AVI, MOV, WMV and MPEG, which Acrobat 9 Pro Extended will then automatically convert to Flash FLV. Users simply pull out the selected frame as a poster image.

Another neat trick here is the new capability to pause a video and mark-up individual frames with the Redline tools (texts notes, clouds, post-it notes). As users pass these comments, a list of marked-up frames gets generated for quick access and the author the ability to select sub-sections of video to be viewed by the PDF consumer.

The inclusion of Flash also means that the PDF has become an independent environment, supporting applications written in Flash which can be embedded to PDFs prior to circulation. For instance, users can add a calculator widget, a live web map or a web service. This means users can open a document and use a built-in Flash calculator to work on spreadsheets or engineering calculations, without ever leaving the PDF document. It can be a difficult concept to understand, as it blows away the existing limitations of what can be included in a document: Documents can now include applications.

AcrobatÝs formats have been updated with native support for Autodesk Inventor, B-reps (boundary representations), STL (a standard for Rapid Prototyping), Syst?mesÝ Catia V5 and Siemens PLM SoftwareÝs NX formats. This concentration on the high-end CAD and manufacturing formats makes sense as AcrobatÝs customer base expands into Automotive and Aerospace with clients like car manufacturer Renault. 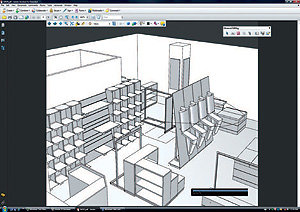 Using the range of shading tools it is quick and easy to build up a number of views and images to send to clients.

In the past, Acrobat has catered to AEC with native support for AutoCAD DWG and DXF. Recognising that AEC is gathering pace towards a 3D future, Acrobat 9 now supports AutodeskÝs Revit and GraphisoftÝs ArchiCAD modelling systems via IFCs or Industry Foundation Classes, a Building Information Modelling (BIM) interchange format.

For those 3D formats that are not natively supported, Acrobat still includes the Ù3D print screen captureÝ capability, which literally grabs the geometry that is in the computerÝs graphic display system.

Authoring and exploring the imported and captured 3D files was poorly catered for in past Acrobat releases. Adobe licensed Right HemisphereÝs 3D Toolkit, which proved to be the most unintuitive application that I have had the misfortune to use in a number of years. So the dropping of that in favour of the introduction of a powerful new tool called Adobe 3D Reviewer is warmly welcomed.

This application came along with AdobeÝs acquisition of CAD format specialist, TTI, last year. While the interface is nowhere near as slick as AdobeÝs other Acrobat products, the functionality of Reviewer goes way beyond authoring and enhancement of the 3D models, it also acts as an agnostic 3D CAD viewing and comparison tool, much like CimmetryÝs (OracleÝs) Autovision.

3D parts created in multiple CAD systems can be easily imported into the same workspace for the creation of and independently sourced 3D assemblies. There are comparative tools to check differences in geometry between CAD revisions, so new geometry added, or old geometry lost can be quickly identified. Measurement and sectioning have been improved and it is easier to export the files as 2D vector or Raster files.

Acrobat now knows where in the world its contents are located, as support for mapping standards are included. It understands geospatial information and can accurately measure kilometres, miles, longitude and latitude. This expands PDF into a whole new vertical area as well as enhancing map data for AEC applications. The move follows both Autodesk and BentleyÝs addition of geospatial referencing in AutoCAD and MicroStation respectively. We are all increasingly designing in a virtual world.

Collaboration and sharing has seen some big leaps too. Acrobat 9 users can access a new web service called Acrobat.com for storing and sharing files. The website is a ÙcloudÝ location and offers both free and paid-for services, such as the new Adobe ConnectNow personal web conferencing feature, which provides desktop sharing, video and voice conferencing, and integrated chat.

Another benefit of Acrobat.com is the opportunity to collaborate with other users while within a PDF document. Using Adobe Reader, other users can join in a review session on a file, with the originator driving the groupÝs navigation through the PDF document in real-time. As Adobe points out, this helps ensure everyone is literally, and figuratively, on the same page.

Acrobat is really good at making digital forms and now it is great at distributing these forms and collating the returns. You may have used web services like www.surveymonkey.com to conduct customer surveys, now you can send PDFs out and let Acrobat gather all the responses and tabulate the results. While it sounds complicated, it is all pretty straightforward using wizard-style dialogues.

This release of Acrobat 9 Professional Extended has really seen the product extend and mature its appeal to designers in both the manufacturing and AEC markets, with additional focus on providing powerful internet-based capabilities for presentations and collaboration. The addition of Flash will also improve the overall experience for PDF creators and receivers. Replacing the 3D Toolkit with something more powerful is welcome but the lack of interface homogeneity needs to be addressed. Our overview is based on the beta version of the software and the final code is expected to arrive in July.