Bentley Systems and Fulcro recently installed an immersive VR BIM CAVE at the Institution of Civil Engineers (ICE) in London to help educate current engineers in the latest collaborative technology as well as inspire the next generation, writes Greg Corke.

It’s fair to say that civil engineering has never been championed as the most exciting of careers. But this is changing. The new Invisible Superheroes exhibition at ICE London, part of a celebration of the institution’s 200-year anniversary, does an excellent job of inspiring the next generation.

But it’s not just about masked crusaders and the unsung heroes behind some of the world’s most amazing engineering projects. Mixed in with the cartoon characters and excellent in-depth project information are some of the latest technologies that are starting to have a major influence on engineering and construction.

The centrepiece is a new VR installation courtesy of Bentley Systems and Fulcro that offers a walk in immersive experience to visitors young and old. This is not simply about education and marketing. The FULmax ‘BIM CAVE’ has been developed within industry to solve the real-world challenges of collaborative design review, training, public engagement and much more.

Up to six people can fit comfortably inside the walk-in cube at any one time. And it’s this ability to collaborate effectively in groups that its developer Fulcro believes is a major advantage over VR headsets like the HTC Vive.

“The benefit of a BIM CAVE compared to say, a head mounted display, is that it’s multi user,” explains Dr Max Mallia-Parfitt, Director of Applied Technologies, Fulcro and the brains behind the FULmax. “Everyone can see what you’re looking at – so if you point to something in a BIM cave, it’s just like you’re pointing at something out on a site in the real world. It means you can get far richer and more collaborative discussions without having someone locked away in an HMD [head mounted display].”

“I can look you in the eye and say are you really sure that’s accessible, is that right? With a goggle [VR headset] I can’t trust you. You can really get to the nitty gritty,” adds Fulcro’s managing director, Ben Haldin.

Not all collaborators need to be inside the same FULmax, as Mallia-Parfitt explains. “Because it’s running on top of a game engine [Unity, which has multi-player built in] we can network them together, so we can have a design team in London talking to an on-site build team in Sri Lanka and both seeing the same model and same information and both being able to communicate in real time.” 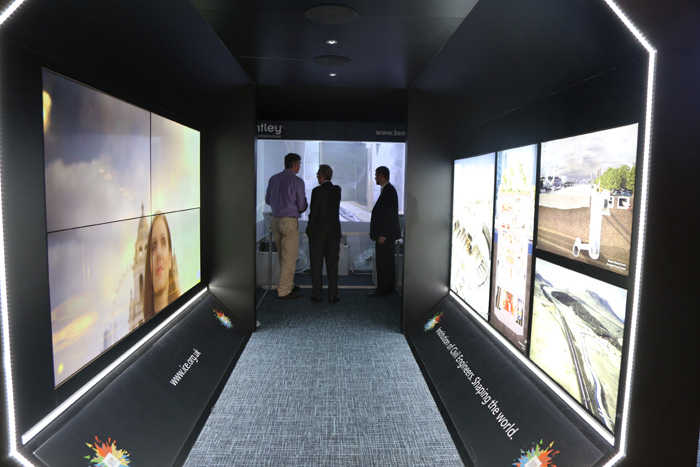 The FULmax is a fully integrated system that fits into a 2.5m square footprint so it can be used in a standard office, shipping container or construction site cabin. It features four 4K projectors, one for each of the three walls as well as the ceiling, which plays a particularly important role in MEP projects when looking at building services.

There’s also a powerful PC that is used to drive the projectors, linked through the FULmaxOS, but Fulcro remains tight lipped about the specification to protect its proprietary IP.

The FULmax is a mono system so each projected image looks the same as it would on a standard 2D display. This is in contrast to other immersive ‘VR’ solutions, which are stereoscopic in nature and make objects appear three dimensional for better depth perception and a better sense of scale. With such stereo systems, the user wears special glasses and each eye is shown a slightly offset view, fooling the brain into thinking it’s experiencing a 3D world. For the FULmax no such glasses are required.

The decision to go down the mono route was based on direct feedback from London Crossrail, who played an important role in the development of the solution, as Mallia-Parfitt explains. “The engineers found that having stereo glasses on, whilst it gave them depth of perception it meant that it became inherently single user again, because the further you got away from the sweet spot the more cross eyed you got. Also, they would always forget to charge the glasses.”

The system is driven by an Xbox controller, making it easy for anyone to navigate buildings, sites, tunnels and more.

There are two separate versions – a semi-permanent one that’s designed for long-term installations and an ultra-portable one, like the installation at the ICE, that Fulcro says can be assembled and dissembled by the client with little training required.

“This thing will pack down into the back of my Citroen C3, my little hatchback,” explains Mallia-Parfitt. “It takes three people about four hours to assemble on site, but we can also build this into the back of a site cabin then all you need to do is move it [the cabin] from site to site.”

Importantly, the system costs under £100,000 which according to Fulcro is less than comparative products on the market. 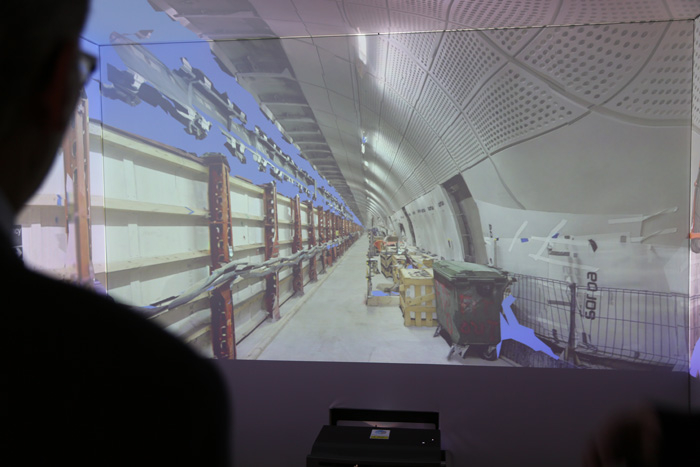 Inside the FULmax, exploring a reality model for capturung construction progress at Farringdon station

The FULmax is not just about hardware. The FULmaxOS software plays an extremely important role, not only correcting for warping and stitching to make sure the image is projected seamlessly across screens but to provide push button, optimised workflows for getting BIM and 4D data into the system as quickly as possible.

“To make VR usable it has to be linked to live data,” said Mallia-Parfitt at AEC Magazine’s NXT BLD conference in June. “In construction, if something is more than 30 minutes old, it’s out of date.”

The FULmax software can take in 66 different model formats and the conversion process can take anything from 30 seconds to 20 minutes depending on the complexity of the model.

In the world of Bentley Systems, the software can import files from ContextCapture, MicroStation, Navigator and LumenRT, as well as iModels.

Fulcro will soon make the workflow more seamless. It is working with Bentley to develop a live link to the visualisation and reality modelling tool LumenRT so there is no need to convert the data. It means designers will be able to make changes on the fly and see those changes straight away inside the FULmax.

Importantly, this live link should open up a range of possibilities for the use of reality modelling data inside VR. Thanks to Bentley’s scalable mesh technology, LumenRT is able to visualise large scenes using actual engineering data, without having to go down the one-way optimisation route. The technology is based on Bentley’s 3SM format and works with point clouds, Lidar data and even standard DTM meshes. Data is automatically streamed from Bentley’s ProjectWise ContextShare service.

Also in the pipeline is a live link to ProjectWise and Navigator, so firms working on large infrastructure projects can move from BIM to VR in seconds and be certain they are working on the most up to date models.

Markup is a major part of design review but at the moment the workflow for users of Bentley software is a little disjointed. Currently, any markups made in Navigator will not be seen in the FULmax until the model is re-imported. However, once the live link to Navigator is released, markups will appear instantly.

The FULmax already supports this optimised design review workflow with other applications such as Solibri and Revizto, where issues can also be tracked through the BCF format.

The FULmax isn’t just about 3D data. It can also play back 360 video, which can be an effective way of communicating and understanding contextual problems on site. Instead of taking photos, simply record a short video which not only shows the issue but exactly where it is on site. 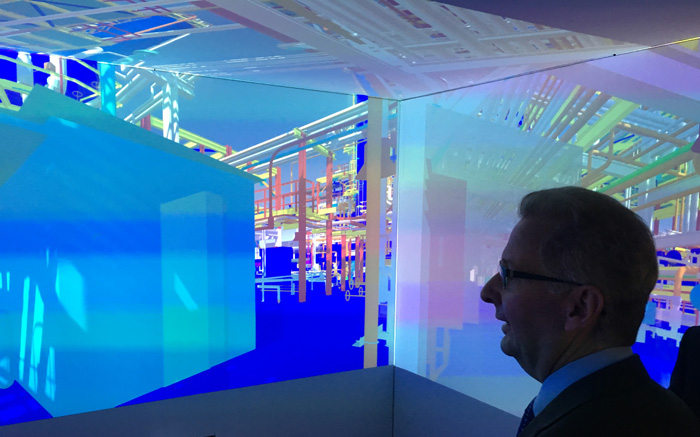 The FULmax features four projectors, including one for the ceiling which is useful on MEP projects for exploring building services

Design review and beyond

The FULmax is predominantly used by contractors and clients on large infrastructure projects for validation and verification of design and coordination. Fulcro has several reference applications from London Crossrail, a project designed in MicroStation using ProjectWise to manage the CDE. The Crossrail team used the FULmax over a period of 18 months.

At Plumstead, one of Crossrail’s new station depots, it was used to visualise construction progress using data captured from an autonomous drone and a weather station to assess site conditions. The interesting challenge for this project was acquisition of data as the triangular site is flanked by three no fly zones – a motorway, prison and a railway, as Mallia-Parfitt explains. “If the weather was correct for flying it [the drone] would take off, fly a pre-programmed route and it would land, upload its data to ContextCapture and 20 mins after that we’d have the as-built model ready to use [inside the FULmax].”

For the new Farringdon station, laser scanning was used to capture as-built conditions to document what’s been installed on site. Inside the FULmax the reality model was used for things like emergency evacuation, training, and site inductions, as Mallia-Parfitt explains. “We can get people down into the tunnel without having to take them out of an office, so they can get in and understand the environment.

“We can also then see what’s been installed and when, so in the future when it comes to the actual maintenance of this asset, of equipment, we would know exactly which panel to take off.”

The use of the FULmax on Crossrail goes far beyond construction and maintenance teams. It was used to engage many different stakeholders much earlier on in the construction process, before the stations had been completed. An interesting example here is evacuation planning, as Mallia-Parfitt explains “The London Fire Brigade came in and went, right let’s walk round each of the 21 stations ‘OK, we need a better access route there, we need a better refuge area, have you thought about this signage for emergency evacuation’?

“We were able to make those design changes at a design phase, rather than having the London Fire Brigade come out to a brand-new station and go ‘that’s wrong, that’s wrong and that’s wrong. Fix it before you are even allowed to open.’ So, having that buy in early in the design phase has saved millions on the project [by not having to rework things on site].”

The system can also be used for public engagement on high-profile projects like High Speed Two (HS2). “We’re talking about using it in a battle bus, taking it out on the road, so each of the communities that are affected by HS2 we can use this to communicate ‘well this is actually what the change to your landscape is going to be, this is the new aqueduct, this is the new bridge, this is the new tunnel that’s going to go in and how it’s going to impact on say, the view from your village.’”

The FULmax will be on show at the ICE’s Invisible Superheroes exhibition in London until the end of the year. After this it will be moving to the National College for High Speed Rail to teach the next generation of engineers on HS2 how to maintain the new network.