For the 2005 release of Allplan, Nemetschek has paid much attention to ease of use, featuring many AutoCAD-like commands. This month Greg Corke takes a look at the core and architectural modules in the multi-disciplinary AEC solution.

Wizards can be used for guiding users through specific design processes, particularly if there is a variation on a theme. Any drawing can be exported and used as a wizard. 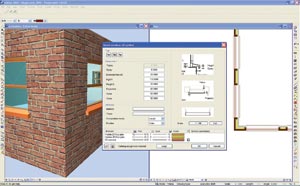 Window Sills can now be easily created in a similar way to doors and windows using Smart Symbols.

To my mind, Allplan from Nemetschek has never been the easiest to use of the many architectural-focussed CAD packages. Long-term proponents of the multi-disciplinary AEC system may well disagree with this statement, but for someone who spent their formative CAD years growing up with AutoCAD, Allplan’s command structure has always seemed a little alien.

Taking direction from industry leaders is nothing new, so it came as little surprise to find that the developer of Allplan has introduced a range of ‘AutoCAD like’ functionality into its latest version. In acknowledgement that there are many CAD literate architects and engineers out there that also cut their teeth on AutoCAD, Allplan 2005 includes many enhancements and additions to the existing commands that are actively described as ‘AutoCAD-like’.

In Allplan 2005 users can now select elements prior to executing a command. They can also select elements based on the direction in which you enter the selection rectangle. In short, draw a window around a group of elements from left to right and Allplan will now select everything that’s fully inside the rectangle; draw a window from right to left and everything that’s inside and crosses the rectangle will be selected.

Allplan 2005 also has more intelligent sketching, and users can now easily set up numerical offsets and angles on the fly, constrain in X, Y directions, and use enhanced snap points, all controlled by a combination of right clicking, a new dynamic toolbar and dialog line. Handles have also been revised and improved for elements to enable much more flexibility when moving, stretching and resizing objects.

While all of these enhancements to the core tools should be immediately recognisable to the AutoCAD user, they should also make the system much more flexible, regardless of background. Indeed a complete overhaul of the dimensioning lines module does just that.

Revision clouds is another new feature for Allplan 2005, which allows users to highlight changes made to drawing files or layouts. These can then be viewed and redlined by non-technical staff with a separate Allplan viewer, which is not free like some CAD viewers.

While Wizards isn’t a new addition to Allplan 2005 (was introduced with Allplan 2004) it’s still worth a mention due to its ease of use and ability to help new users up to speed. The Wizard is a small window, which is displayed in the workspace and includes a pictogram-like key representing frequently used tools. It’s a bit like a toolbar, but its actual geometry rather than an icon represents each command. All you need to do is click an element with the right mouse button and select a tool on the Shortcut menu. When you double-click with the right mouse button, the parameters of the element are copied.

As opposed to a ‘normal’ Allplan window, you cannot draw in a Wizard window. But you can use the icons in the lower border of the viewport for controlling the display on screen. The Wizard window has the Always on Top property and cannot be maximized or minimized, although its size is variable.

Several predefined Wizard files are provided with the program. In addition, you can create your own Wizards, and these can be ideal for guiding users through specific design processes, particularly if there is a variation on a theme. For example, an architect working on roof design could set up a Wizard exclusively for this purpose, complete with commonly used dimensions/spacings.

Nemetschek has introduced a new file format for the new release called NDW. Prior to Allplan 2005, users were only able to manage, save and copy Allplan documents within projects. Now, NDW documents can be saved to any path and opened independently of any projects. This becomes particularly beneficial when sending a document to a partner office, or to temporarily open a drawing file from a different project.

As you would expect, import and export has been improved with support for AutoCAD via DWG and DXF from V12 to 2004. Allplan 2005 also supports MicroStation (DGN), Industry Foundation Classes (IFC). There’s also been a lot of work done on the links to Cinema4D from Maxon used for professional rendering and animation. You can now transfer complex 3D models from Cinema 4D R9 to Allplan 2005, while retaining co-ordinates. For example, complex structures and freeform surfaces like pavilion roof designs.

Allplan also includes a new comparison tool used to compare different states of a drawing. If a drawing has been amended you can compare the amended drawing with the original drawing and receive a visual result of the changes that have been made. This kind of functionality is typically found in CAD document viewing packages, so it’s refreshing to see this inside a CAD package as standard.

Elsewhere, Allplan’s XRefs have been enhanced to include a new Advanced XRef, which enables XRefs to be analysed and evaluated when it comes to creating lists and schedules. For example, when using Advanced XRefs users could carry out a quantity take off to find all the light fittings of a particular type in a building. Using Advanced Xrefs, however, does increase the overall file size.

So far we’ve looked at the core enhancements to Allplan 2005, which are applicable across the whole software suite. However, Allplan is much more far reaching including specific modules for Architecture, Geo, Structural Engineering and Analysis. The Architecture module, the focus of this month’s review, has been updated in a number of key areas, which we’ll deal with in turn. 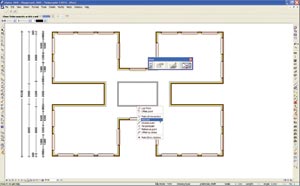 Allplan 2005 has more intelligent sketching, and users can now easily set up numerical offsets and angles on the fly, constrain in X, Y directions, and use enhanced snap points. 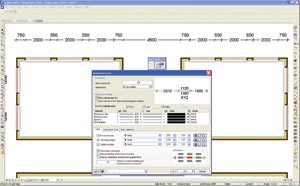 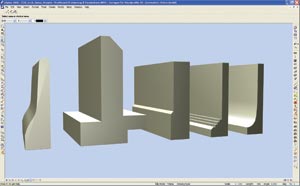 Profile walls can now be created with custom cross sections, which will be particularly beneficial for those working on renovation projects.

Custom profile walls + beams: One of the most interesting developments, particularly for those working on renovations, is the introduction of profile walls with custom cross sections. Users create or import scale-based 2D drafts of wall profiles and save these drafts as symbols. This will be particularly beneficial to those working on refurb projects, including buildings that feature stepped or non-standard walls. This feature could also be used to create other structural features, such as tunnels – in fact anything that behaves like a wall.

Taking this into the realms of structures, Allplan 2005 also has the ability to create beams with custom cross sections, which will be of particular interest to those working in projects where structural steel is used as a core architectural feature.

Smart Window Sill: Those that have seen AEC Magazine’s previous reviews of Allplan will be familiar with the concept of the Smart Window and Door Symbol. Allplan’s Smart Symbol designer enables users to define each component of a door or window including the frame, posts, muntins, and sashes. Once defined smart symbols can be saved and recalled for later use. At the same time a representation of the elements for different scale ranges in plan, elevation and 3D is generated. The major advantage of using smart door and window symbols is that if, at any time during the design process, the opening size should change, so will the layout of the design to fit the new space.

New for Allplan 2005 is the ability to create similar Smart Symbols for Window Sills, an architectural feature that Allplan has struggled with historically. With the same flexibility provided by the door and window tool, Smart Window Sill symbols can be created by entering in the dedicated dialogue box standard parameters such as thickness, splay and distance from sill. In addition to using the various options provided in the window opening command, you can now insert window openings and several smart symbols, such as windows, inner and outer window sills, and roller blind housing, in a single step. This is a huge time saver and. Also new for Allplan 2005 is the ability to create Smart Symbols in corner windows.

Architectural attributes: It’s essential for the modern CAD system to go beyond core geometry and while Allplan has always had the ability to include key components in material take offs, non-standard components have missed out. Now, new assignment options are available for individual architectural components and 3D models. Although these elements get new object names, Allplan is still able to recognize, evaluate and analyse them as the original elements on which they were based.

You can assign suitable properties to the new architectural components and in subsequent quantity takeoffs, the new object names and the corresponding attributes of the new components can be used in generating common lists of schedules.

Quantity Takeoff: Extending the quantity takeoff capabilities of Allplan, version 2005 includes the ability to take off finishing surfaces in rooms. Now users can automatically take off items such as plaster, plasterboard, paint and insulation.

Stair Design: it is now possible to reposition individual stairs and align them with the 2D draft, which has been imported into Allplan. This function is especially useful when working with existing structures, as the treads of the existing stairs may not be constant.

A further improvement enables the thickness of the stair components to be entered as either perpendicular or vertical thickness. If the perpendicular thickness option is used, it is also possible to undercut the treads.

Surface styles: Surface styles allow you to display architectural components with different surface settings depending on the reference scale or drawing type set. You can define hatching styles, patterns, fills or bitmaps for fixed scale ranges or drawing types as surface styles and save these under a name of your choice. This enables you to change the look of your drawings at a mouse click.

Since Allplan was launched into the UK five years ago we’ve never questioned the depth of the product, and it’s still one of the most comprehensive AEC design solutions on the market. From its UNIX roots, improved ease of use was always going to be a natural route for the product to take. And over the past few releases Nemetschek has concentrated on making its tools, both generic and architectural, much more straightforward and flexible, be it with clearer dialogue boxes and icons or improved design processes. In Allplan 2005 a large proportion of the development resources has been channelled into the core draft module for features like more intelligent sketching. While many of these ‘AutoCAD-like’ actions may seem trivial to some, for others they could make all the difference when getting to grips with Allplan for the first time.

Elsewhere, the addition of window sills, and custom profile walls will provide detail and flexibility for architectural users. And this builds on the extensive work done in the 2004 release with walls, openings, roofs and stairs. Next month we’ll be taking a look at the engineering-focussed modules.