Autodesk has a multitude of products to offer the AEC industry. With the new 2012 range, the company has decided to create a number of product bundles, or suites. Martyn Day investigates.

Autodesk has been executing its yearly release of updated CAD products like clockwork for the past decade. In the last five years the AEC product range has mushroomed, with the company unleashing a deluge of new and evolving point solutions around the March timeframe. This year there was a significant difference to the launch, in that it was not just about the new features — in fact, the new features have very much taken a backseat. The big news for Autodesk’s 2012 AEC range is the availability of product suites.

Suites are the culmination of the AIRMAX (AutoCAD, Inventor, Revit and Max) internal development program at Autodesk: to standardise the User Interfaces of the products, to improve data compatibility between the platforms and to share underlying graphics subsystems to provide a homogeneous look and feel in the display textures and colours. Because Autodesk’s products are all built on one platform, this has been a Herculean task that has taken years to complete. With the ‘under the hood’ work done, Autodesk felt it could produce bundles of related applications, with considerable savings, expanding the capabilities of its customers across complete workflows, from project design, visualisation and simulation to documentation and construction.

With every release, Autodesk gets closer to delivering on its Building Information Modelling vision, where all design is done in 3D and drawings become less important.

So the Standard, which is an AutoCAD-based offering, has six products, the Premium suite is for BIM (Building Information Modelling) and offers ten and Ultimate, which addresses simulation and analysis, weighs in with thirteen applications. The amount of professional software in these suites is really quite mind blowing. On one hand I am compelled by software gluttony at the veritable gourmet banquet of applications and the cost savings — which range up to 60%. However, on consideration, all these applications are professional level, mature products that require training. If you don’t use the applications regularly, then it’s easy to forget how to drive the stuff. With the separation of specific tasks within firms, would a single user actually use many of these? Would a design architect ever load up AutoCAD MEP?

It is true that designers these days don’t stick to just using one application but will mix and match from a number of ‘hot’ tools on the market. While I have seen this in action, it has tended to be with products like SketchUp, Generative Components and Rhino, which are more at the conceptual end of the process. However, I do realise that most designers would love to get their hands on 3ds Max, because it’s ‘way cool’.

The suites support Autodesk’s cascading network management system but there are limits. In a mix of licenses, the cheap seats are allocated first. So in a network mix of two AutoCADs and one Building Suite, those opening AutoCAD will be allocated the single licenses first leaving the Building Suite able to provide any one of its applications next. However if three people need AutoCAD, then none of the Building Suites’ additional applications can be opened until the last AutoCAD is shut down.

From this, I can see how for large firms, the suites offer a good way to buy in a lot more breadth of product at a discount. Depending on the type of single user, a suite may also be a great way to save money, if two or more of the products are of use. However there is also the ongoing subscription pricing which is a slight increase on a single product.

With so much software included, Autodesk has dispensed with DVDs and ships the suites on a single ‘funkily’ designed USB stick, which I have been told is 32GB in size and can’t be overwritten. 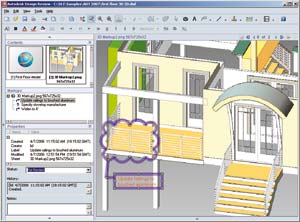 Buzzsaw makes it to the iPad and Android mobile platforms, enabling Autodesk DWF drawings to be seen anywhere at anytime.

There are too many products and too many features to go into detail here but here’s a round-up of what’s new in the core building products:

AutoCAD Architecture 2012 is definitely the poor cousin of Revit in terms of development but, as it’s a pure AutoCAD play, it is still popular. 2012 comes with a number of enhancements and a few new features. Doors, Spaces, Structural Members and Windows have all been enhanced, together with IFC support and Point Cloud. Also new is built-in access to Autodesk Exchange and collaboration with AutoCAD WS. AutoCAD MEP gains similar new capabilities together with some other enhancements.

Vault Collaboration AEC enables access to data management from within the user’s design environment. Built-in data replication keeps the most up-to-date versions of project drawings, even if they’re thousands of miles apart. When there’s no web connectivity, changes will be kept and re-synced when connection is restored. 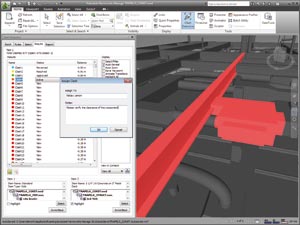 Navisworks now has a great management capability for working through and generating reports on building element clashes.

Revit Architecture 2012 is a substantial release with plenty of new features and enhancements. The most striking things are: support for point clouds is built-in (like AutoCAD), the excellent 3Dconnexion 3D mouse is now supported out of the box (see page 26 for a full review), and there is a powerful new wiki help.

Autodesk has woken up to the fact that BIM is great and really valuable to those doing the construction. This release sees additional functionality to appeal to those that want to make construction BIM models, which are different to an architectural BIM model. New parts and assemblies together with conceptual energy analysis takes Revit to the heart of construction.

The new Revit server and Citrix support will greatly enhance workgroup usage, as well as remote access. Other than that, the majority of existing functions have been enhanced.

There have been many people asking if there is going to be an Apple Mac version of Revit. I can clearly state that Autodesk currently has no plans to write a specific OSX release. As part of a major behind the scenes reworking, Autodesk is breaking down its products and rewriting them to be platform independent, i.e. not based on Windows. In time, Revit will be ready to be delivered over the web or via a number of other ways, which will mean it will run on any platform. For now, Autodesk’s AEC team considers that this will be the way that Revit will appear on the Mac.

Revit MEP 2012 was probably the weakest of the Revit range of BIM tools but is now ramping up at considerable pace. The Revit server, Citrix, energy analysis and 3Dconnexion support is also added here, as are new features of for Pipe Placeholder Layout, Duct Placeholder Layout, Parallel Pipe Layout, Parallel Conduit Layout. In documents its also possible to add 3D tags.

Navisworks 2012 is actually two products, Navisworks Manage and Navisworks Simulate. These are used to co-ordinate BIM models for construction and management. The interface of both finally gets brought up to spec with the other Autodesk products and directly links to Revit’s new construction modelling and Vault.

Simulate gets an interactive Gantt chart with 4D simulation, schedule tasks and a new timeliner API.The most important feature, Clash detection, is only available in Manage and this release sees a massive improvement in the management and tracking of clashes. File support has been expanded and improved to add DWF, Primavera, Faro (laser scans), RVM, Pro/Engineer, SketchUP, and Bentley DGN.

Buzzsaw 2012, the online document distribution and management service, is now compatible with Autodesk Vault, allowing documents to be automatically kept up to date and linked to the drawing office. The addition of Buzzsaw for Android, iPhone and iPad also now expand the system into a truly mobile document system. Add AutoCAD WS, now for iPad and Android tablets, into the mix and drawings can be accessed, edited and commented on in a pretty seamless way. By connecting up these standalone solutions Autodesk is building a very compelling, low-cost mobile solution. Autodesk is calling this vision ‘BIM 360’ and is well worthy of evaluation.

3ds Max Design 2012. There are have considerable improvements this time around with the new Nitrous accelerated graphics viewports, improved compatibility with Alias products, inclusion of the ray renderer, some great new non-photorealistic ‘stylistic’ rendering styles, new rigid body dynamics and a range of other enhancements. 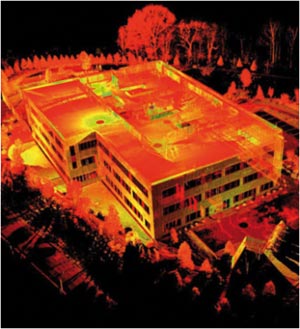 Following on from AutoCAD, Revit now gets the ability to import and display point cloud images from laser scanners.

Project Galileo. During the launch event we had a few glimpses of Project Galileo, which is currently in Autodesk Labs (labs.autodesk.com/utilities/galileo/overview/), giving the impression that it might actually be near to launch. Galileo is a concept modelling tool for city-scale projects, being able to handle multiple datasets in the context of a huge 3D model. The project brings CAD, BIM and GIS together to enable collective decisions based on having all the necessary information in one place. This is certainly a product to watch.

In conversations with the Autodesk AEC team, I mentioned the good value of Graphisoft’s ArchiCAD SE product, which is a cut-down version for full ArchiCAD that retails at under £1,000. There was some agreement that to get the mass of users to migrate to BIM, cost was an issue and that the ‘all singing and dancing’ tools in the Revit suite were perhaps not an easy ‘in’.

The market has also yet to see Dassault Systmes launch its BIM modelling tool, Live Buildings, based on Catia, possibly this year. On the subject of a possible Revit LT product I was told to ‘watch this space’ and our conversation naturally went on to Autodesk’s Project Vasari (labs.autodesk.com/utilities/vasari), which is an ‘expressive design tool for creating building concepts with integrated analysis for energy and carbon’.

While currently in ‘Labs’, the product has a powerful modelling engine and hooks directly into Revit for post rationalisation. I may be putting 2+2 together and getting eight but I would not be surprised if Vasari ended up being Autodesk’s entry-level BIM tool, to get people into modelling and analysing their designs. It’s a very impressive product and I would strongly suggest giving it a try.

For Autodesk, 2012 is the year of the Suite. For customers, on one hand, it’s now possible to own a lot more products for considerably less.

However, due to the delivery mechanism, under a single user licence, the skills-level required for an individual to derive that value has to be considered. The majority of tools in the bundle are mature, professional applications that require training and if not used frequently, rust sets in. Also the ongoing increase in subscription per seat has to be considered.

That said, larger firms using a cascading licence system will find the Suites more useful, adding in some more exotic applications into the mix.

Looking ahead, I am wondering what this will mean for the development of Autodesk’s AEC products?

In a presentation from a different division of Autodesk, a snippet of information on plans for 2013 indicated that ‘the cloud’ will have an increasing role within our design tools. This isn’t about running CAD over the web but concerns specific built-in functionality using web-based services to perform tasks.

At the moment subscription is mainly about buying the next release; in the future it will give you access to powerful web-based analysis, rendering and collaboration tools, all from within your design application. To a small degree this has already happened with Ecotect which, when coupled with a subscription, gives customers access to the online Green Building Studio (GBS) energy analysis service.

For this year, the 2012 crop of Autodesk products continue to demonstrate the steady evolution approach that the division has taken to adding functionality in an industry that makes changes slowly. Continuing to harmonise the various interfaces and expand data compatibility between products are always welcome improvements.