Navisworks support, project sharing through cloud, and improved navigation and visuals are among the new features added to Unity Reflect for the 1.2 release. The software allows users to bring multiple BIM models with all their metadata into real-time 3D environment, including in AR and VR, and maintain a live link between them.

Unity Reflect launched last year with support for Autodesk Revit as part of Unity’s strategic collaboration with Autodesk. In March, this was expanded to SketchUp and Rhino.

Now by adding support for Navisworks, including metadata, Unity says it will help AEC firms improve BIM coordination, visualise design clashes, and better coordinate engineering reviews. However, users will still have to wait for annotation tools and a two-way ‘Live link’, which are planned for a future release.

Unity is also looking further downstream, announcing its intention to get Unity Reflect into the hands of on-site personnel to guide the construction process. And, as many hands as possible, as improvements to the Unity Reflect Viewer mean AEC firms can now send projects to as many clients and collaborators as they want for free.

The Sun Study tool has also been improved and now allows the positioning of the Sun, based on latitude, longitude, time of day, day of year, UTC offset & North Angle.

Enhanced navigation helps users more easily move around a scene. This includes features such as teleport mode, 2-finger drag, and easy-model reset to make gestures and model interactions more intuitive on any device, including iOS, Android, PC, and now Mac (thanks to a new OSX Viewer). There is also support for multithreading for faster model loading on mobile.

Cloud hosting is currently a Beta feature that allows a firm to host projects on-premise or in the cloud, so data can be pushed to mobile devices and models shared with users outside of its network. 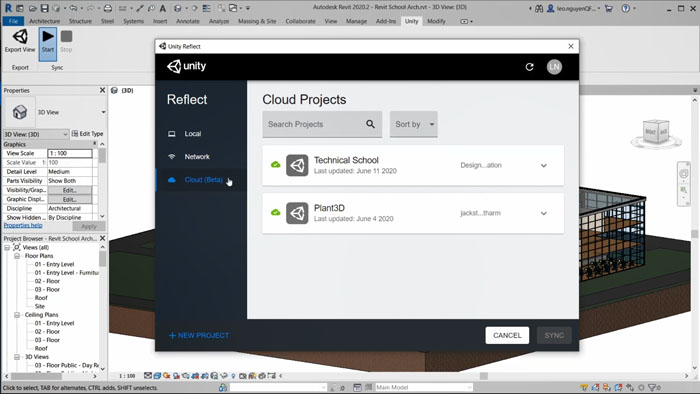 Projects can now be hosted in the cloud, as well as on-premise

A new Unity Reflect Dashboard allows users to monitor export progress and manage projects and servers. It can also be used to delete specific models (sources) from a Reflect project.

Finally, Unity has updated its Unity Reflect roadmap so users can see what’s in development, planned, and under consideration. Features currently in development include large model support for mobile devices, Integration with Autodesk BIM 360 and Oculus Rift support.

Further down the line, there will be a plug-in for ArchiCAD, point cloud support, and the aforementioned two-way ‘Live link’ that will allow data to be sent back into the source app in a ‘controlled way’. Unity is not sharing many details on this feature yet, but at AU 2019, Autodesk revealed that Unity Reflect will have a future integration with Autodesk BIM 360 that will allow users to flag design issues in VR and have them show up automatically in BIM 360’s issue registry so they can be resolved later on.