BIM is revolutionising site work and construction. Topcon recently hosted a series of global events to highlight new technologies and the latest techniques. By Martyn Day

The Topcon technology day featured all the work necessary to create a paved road, from initial site survey, through terrain modelling to computer-controlled grading and paving. Notably, there were no pins, flags, stakes or fencing

Moving architectural design to embrace 3D has been a long and drawn out process but the market is mature and with governments across the globe looking to make the process standard, it looks like things are moving quickly.

Software and hardware developers are now concentrating on the construction phase of the process and there has been a convergence in competition and development, from the likes of Autodesk, Bentley, Trimble and Hexagon (which owns Leica, Intergraph and others).

With the division lines drawn, expect to see many advances in construction technology through accelerated development and integration of systems.

Trimble and Bentley have already joined forces and develop solutions for the construction industry based on a joint construction schema and common format Bentley’s ‘imodel’, and Bentley has embedded native support for Trimble’s scanners into MicroStation.

Trimble has acquired an impressive array of construction technology firms over the last few years and Autodesk reacted by working with survey and laser-scanning firm Faro.

Autodesk is now teaming up with Trimble’s rival, Topcon Positioning Systems, developers of positioning technology for surveyors, civil engineers, and construction contractors. Autodesk has embedded native support for Topcon devices into AutoCAD and Revit and is developing Civil3D, Recap and Infraworks with feedback from both Topcon and Faro.

Topcon recently held a series of technology days in the UK and US, to demonstrate the latest range of automation, surveying, monitoring and control systems. Autodesk was on hand to demonstrate the links between its software and Topcon’s construction capabilities.

In the UK, Topcon took over a field at Stoneleigh Park, Coventry, and took attendees through the complete process of creating a roadway. Starting with a green field, the event took a day to demonstrate every step from data capture using Totalstations, laser scanners, mobile mapping and UAS (Unmanned Aerial System), through to digging, grading and monitoring using remote machine control. Finally paving was laid along the prepared surface, ensuring a level surface.

The most notable feature of this demonstration was the omission of any setting-out, there were no pins, flags, stakes or fencing. Software determines a machine’s current position and then compares that with the desired design surface, with everything was driven from a 3D model with highly accurate GPS location controlling the machines paths and cuts.

The humans driving the vehicles were mainly going along for the ride. It was made very clear that the technology is available today to link the civil 3D model to drive the real world, this is CNC (Computer Numerical Control) machining on a grand scale.

SiteLink3D Another Topcon technology on show was the SiteLink3D remote service which offers view, access and control from anywhere on the planet, from a mobile or desktop machine, to all the operators on a job, showing location, activity and which file is driving the task. It is also possible to text operators and transfer new files to machinery onsite.

The software shows a worksite with machine locations and paths, together with feedback and analysis of the work being done. If the grading along a path is shown as being green then it has been worked to being within tolerance. Any red marked areas have yet to be fully graded. So, it is very clear at a remote glance how much work has been done and how much is left to do.

Should there be a design change, it is possible to edit the site model and send new files to the machines on site.

Inbetween the field demonstrations there were a number of product and customer presentations. The stand out talk was given by Topcon customers Skanska and Walters Group, which are currently jointly working on a motorway intersection in the UK and heavily utilised machine control.

We were told that this was the first time that Skanska had opted to try out machine control to this level, omitting setting-out and using remote monitoring.

The net result was no setting-out errors, a higher-quality end deliverable with significant savings in both time and money. Engineering decisions that were made in the field were fed back to the design office, the Digital Terrain Map (DTM) was edited and new files were generated and sent to the machines on-site within minutes. There were additional benefits with reduction in labour and with that better on-site health and safety.

In addition to traditional surveying equipment Topcon offers two unmanned aerial vehicles for surveying and monitoring. The Sirus Pro is a lightweight, hand launched fix-wined unmanned aircraft that has an autopilot to fly pre-planned paths, offering a built-in 16MP Fujifilm X-M1 camera with highly accuracy GNSS RTK terrain mapping. The UAV comes with post processing software for creation of DTMs and orthomosaics. These models can be measured, overlaid with 3D models for cut and fill analysis, and used for as-built design comparisons.

Newly launched, the 2.3kg, carbon fiber Falcon 8 octocopter was demonstrated. Manufactured by Ascending Technologies, the German-made UAS was incredibly impressive in its lightweight design and dogged stability in the windy conditions.

The Falcon can be launched by hand or from the floor and at the end of the flight was plucked out of the air by the operator. While it was hovering off the floor, the operator pushed and moved the drone with force, only for the device to recover its height and position. 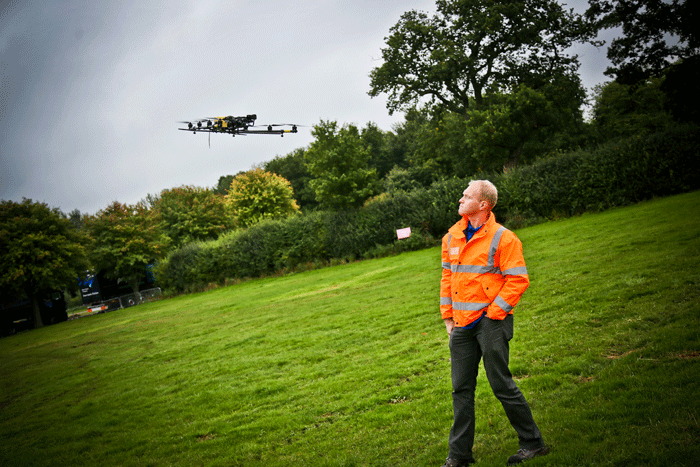 Topcon’s Falcon 8 octocopter UAS (Unmanned Aerial System), can carry various payloads and is extremely stable. It can perform a range of imaging services with a variety of payloads, from high definition (HD) imaging, thermal and RGB stills, and real-time video

The Falcon 8 can be flown manually or fully automated and can fly both 2D and 3D waypoint driven routes via the provided Navigator software. It can fly 360-degree panoramics or circle areas of interest. It can also perform as range of imaging services with a variety of payloads, from high definition (HD) imaging, thermal and RGB stills, as well as real-time video. Topcon suggests the Falcon is best used for surveying areas up to 35 hectares.

For an octocopter it is also extremely quiet despite having eight 100-watt motors and has the ability to fly on even with a number of motor failures. The Falcon has three autopilots, redundant electronics, a redundant propulsion system, and redundant radio links.

Topcon also recently announced three new model laser scanners in its GLS line, the GLS-2000S, GLS-2000M and the GLS-2000L. The scanners are designed to capture data based on the measurement range needs of specific applications. The S model is optimised for short-range applications (130 metres), M medium (350 metre range) and L, long (up to 500 metres).

The new Topcon Precise Scan Technology II, enables the GLS-2000 models to emit pulses three times faster than the previous generation and feature built-in dual 5MP cameras. One camera has a 170-degree wide-angle lens for high-speed imaging, and the other has an 8.9-degree telephoto lens that is coaxial with the measuring axis.

The GLS range is ‘eye safe’ and can be operated with one touch. Topcon is positioning them for the ‘Scan-to-BIM’ and ‘As-Built’ markets. The machines feature a 360-degree dome scan capability, which enables the scanning of difficult structures, interiors, towers and bridges.

It is clear that there is a rapid convergence happening between 3D modelling in the building and civil design space with the integration of computer controlled machine tools in the construction industry. Disparate technologies are now combining to let the digital world lay out and shape the construction of the real world.

For companies like Skanska, linking the office with the worksite has obviously brought dividends and the company looks set to adapt its construction processes to rely on these ‘invisible’ control systems, which offer flexibility, monitoring and safety within an automated remote environment.

The UAV market is set to explode, not only in the professional world but also with consumers. The Falcon 8 was very impressive to watch go through its paces and comes highly recommended.

Recent concerns of aerospace management and the potential for accidental harm are rapidly accelerating. This Christmas, over a million drones are expected to be sold. This could impact professional use and we suspect that there will be stronger regulation to manage the drone market as it ‘lifts off’.

There are other concerns with regard to remote surveying and terrorism, recent unexplained flights over France’s Nuclear power stations have caused alarm, for example. The digital virtual and real words are starting to blur. 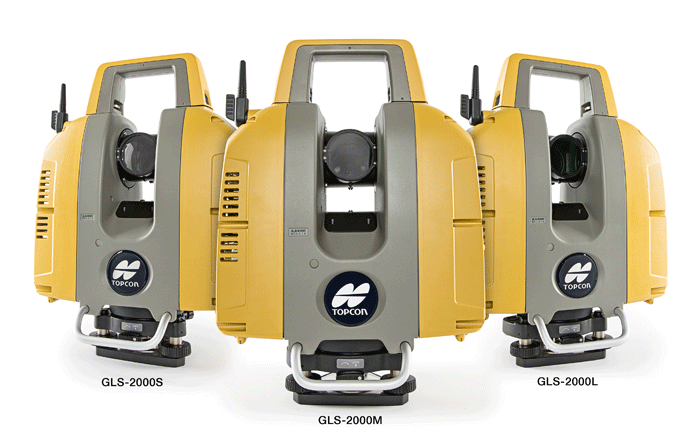 The new GLS 2000 series of laser scanners from Topcon are three times faster than the previous generation and come in 3 flavours, short, medium and long range