Fujitsu has unveiled its first ever Small Form Factor (SFF) workstation, the Fujitsu Celsius J550.Unlike similar-class machines from Dell, HP and Lenovo, Fujitsu’s slimline workstation can host a full height graphics card, up to the mid-range Nvidia Quadro K2200 (4GB) or AMD FirePro W5100 (4GB).
This is big news for 3D CAD users as they can now have access to levels of 3D performance that were previously only available in mini tower desktop workstations, such as the Fujitsu Celsius W550, also released this month.
Traditionally, SFF workstations have only been able to take a low profile graphics card, such as the Nvidia Quadro K620 or AMD FirePro W2100, which are more suited to part or small assembly modelling, or the Nvidia Quadro K1200, which offers entry-level to mid-range performance.
In order to host a full height graphics card in the physically constrained Celsius J550 chassis, Fujitsu has used a riser card so the GPU sits parallel, rather than perpendicular, to the motherboard.
Fujitsu’s SFF workstation also stands out for its storage capabilities, both in terms of capacity and performance.
It can host up to seven drives giving a maximum capacity of 13.5TB. This includes up to three PCIe NVMe SSDs (one on the motherboard and two on a PCIe add-in card), and four 2.5-inch drives (HDD or SSD) or two 3.5-inch HDDs.
To boost performance in I/O bottlenecked applications it is also possible to configure the two PCIe NVMe SSDs on the PCIe add in card in a software RAID 0 array.
Despite the increased graphics and storage capabilities, the Celsius J550 still manages to compare favourably with its peers in terms of size. At 332mm (w) x 338mm (d) x 89mm (h) it is slightly smaller than the HP Z240 SFF (338mm x 381mm x 100mm) and slightly bigger than the Dell Precision Tower 3420 (290mm x 292mm x 93mm). 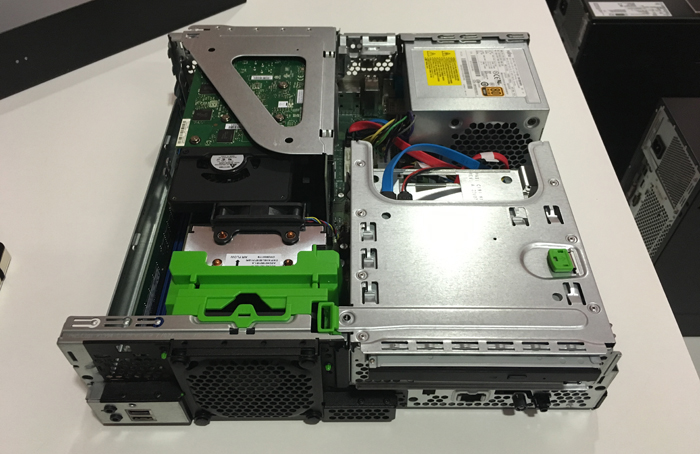 Interior of the Fujitsu Celsius J550 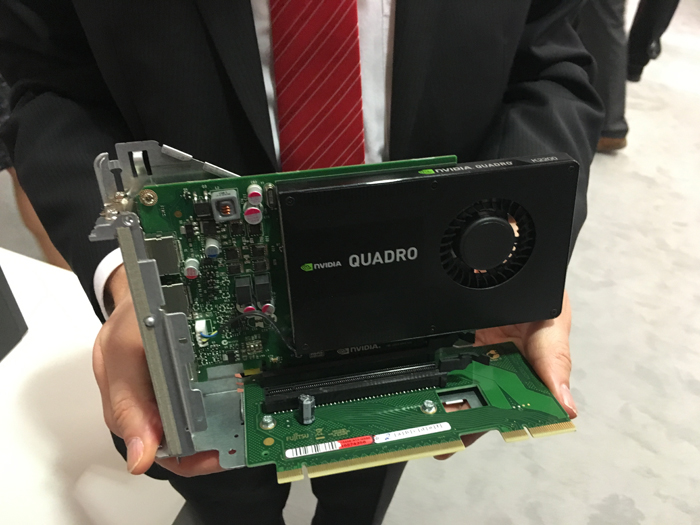 The Fujitsu Celsius J550 uses a riser card to fit a full height graphics card into its slimline chassis
Elsewhere, the machine is pretty standard for a new generation SFF workstation. It features a big choice of ‘Skylake’ Intel processors, including Intel Core i3, Core i5, Core i7 and Intel Xeon E3-1200 v5 series. The quad core Intel Xeon E3-1280v5 (3.70 GHz up to 4.0 GHz) is the top end CPU, while the dual core Intel Core i3-6100 processor 3.70GHz) could appeal to budget CAD users.
It has four DIMM slots leading to a maximum of 64GB DDR4 memory and nine USB 3.0 ports (two at the front, six at the back and one internal).
Meanwhile, the Fujitsu Celsius W550 mini tower workstation, also announced this month, is very similar to the Fujitsu Celsius J550 in terms of core spec – CPU and memory. The main differences are it can handle more powerful GPUs (Up to Nvidia Quado M4000 or AMD FIrePro W7100), it can host more 3.5-inch drives and has more spare PCIe slots for add-in cards. 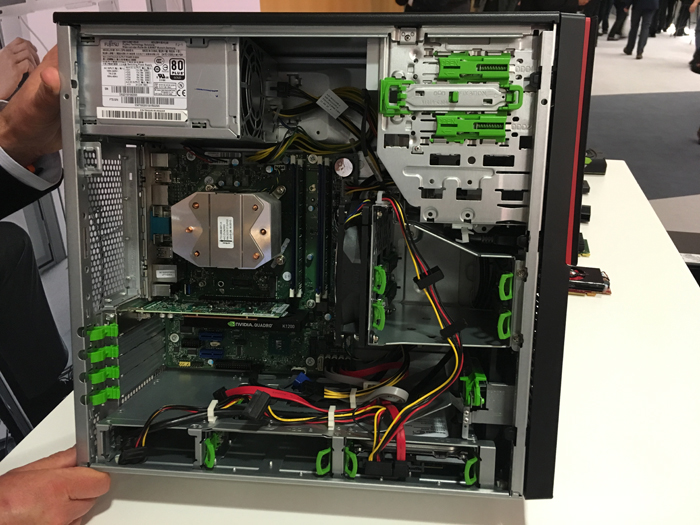 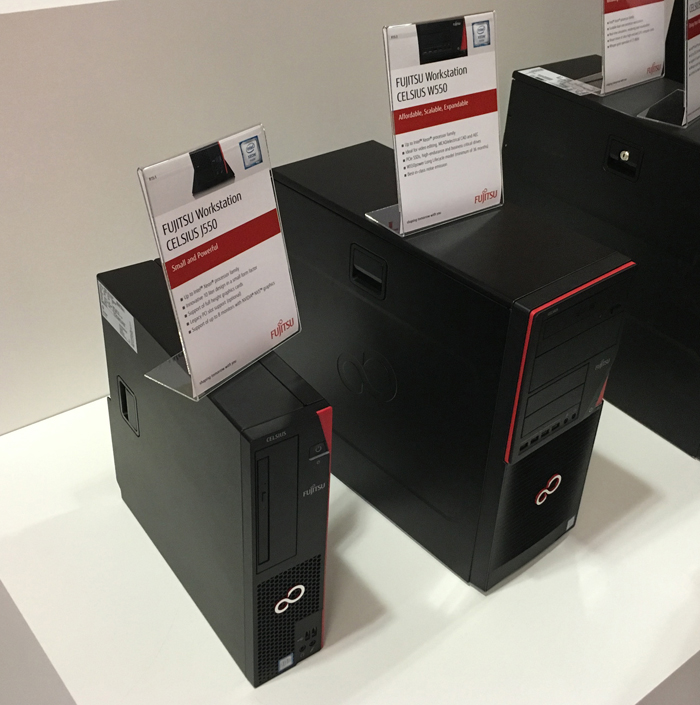 Fujitsu Celsius W550 mini tower
In related news, Fujitsu Manufacturing Industry Solutions group in Japan has developed a high-performance remote graphics protocol suitable for interactive 3D CAD. At the Fujitsu Forum, held in Munich this week, the company demonstrated the FTCP Remote Desktop technology by connecting remotely to a Fujitsu Celsius rack workstation in London. Then, through a FTCP Remote Desktop Windows client running on a laptop in Munich, Fujitsu showed how PTC Creo and other CAD/CAM/CAE tools could be used remotely.
On the surface Fujitsu’s FTCP Remote technology looks similar to HP RGS, which is used to stream pixels from a host workstation or server to a thin client.
HP RGS is bundled with all HP Z Workstations so users get remote access to their workstation for ‘free’.
While Fujitsu was demonstrating its FTCP Remote Desktop technology as part of a hosted ‘engineering cloud’, it will be interesting to see if it adopts a similar model to HP. Bundling the software with its Celsius workstations could be seen by customers as a value add.
More details of FTCP Remote Desktop can be found here.
Advertisement
Advertisement