Just as we were going to press, Autodesk announced the release of Revit 7. Here we outline the new and enhanced features of Autodesk’s innovative Building Information Modelling (BIM) system. 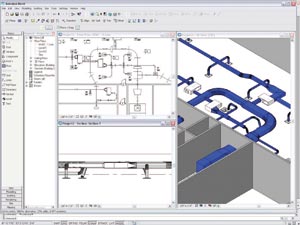 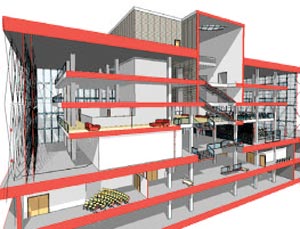 While most of Autodesk’s products are settling down to a yearly release, Revit is still maintaining a ‘2x’ velocity of development, producing two major releases a year. It only seems like yesterday I was reviewing Revit 6 and now here comes Revit 7! The good news is that there’s some major new functionality to the product and it certainly starts broadening the BIM concept, beyond the architectural design elements.

Revit’s older brother, Architectural Desktop appears to have a yearly release now and despite ‘the cool of the new’, is still selling like hot cakes. This is mainly due to the fact that ADT is based on AutoCAD, works a bit like AutoCAD and is proficient in a 2D AutoCAD kind of way. Revit is still struggling to gain much headspace but it is beginning to get used on some major, major designs. The detail design for David Child’s Freedom Tower, which fits into Daniel Libeskind’s World Trade Centre master plan, is currently leading the Revit charge. Skidmore, Owings & Merrill (SOM, of which David Childs is a consulting Partner) has seen its use of Revit on the project grow from just a pilot for the underground ‘what if?’ work, to being the critical design tool for the whole building. This stress testing is proving critical in feeding back into the development of the product, while SOM is claiming major cost savings in the process.

So, on to the content of Revit 7. As, one would expect, it’s the usual mix of brand new features and enhancements to existing features. However, this release also features something that I was told would not appear in Revit – an Application Programming Interface (API), a key to allow third parties to add features and functions to Autodesk’s own. Having good APIs and lots of third party developers was one of the key reasons given to the success of AutoCAD, it seems that with Revit 7 comes the admission that Autodesk can’t do everything it wants in the time that is needed. The first batch of developers have been recruited and these address the structural side of things, which is apt as this is our structural issue!

Structural Design – Revit could always display structural members but these were mere dumb’ positionals’. The new release comes with joist systems, beam setback controls, brace controls and column-grid capability. The beam data is held within the Revit structural model, allowing external applications to access the structural information for analysis. To do this, Autodesk has implemented the first stage of an API (Application Programming Interface), a concept always appeared to be shunned by the Revit developers. This is an admission that Autodesk realises that it can’t do all the development it needs to do and so will work with specialist partners.

It’s kind of weird but ADT has ABS (Autodesk Building Services for HVAC etc.) but has no structural, Revit has no building services but it has structural. At some point one of these applications is going to have to do all aspects of the ‘single’ model’!

Stacked Walls – It’s now possible to create walls where there are changes in thickness, at different heights. These sub walls can also be scheduled for quantity take-offs.

Sub Region tools – These are new sketch defined areas hosted on toposurfaces. They can be moved and edited, have names, materials and areas and appear in toposurface schedules.

Nudge Tool – Placement of elements is critical in any modelling system and Revit 7 now enables the arrow keys to move elements by 1 snap unit – if you hold the shit key at the same time, it will move 10 times the current snap unit.

Viz Support – There’s a new plug-in to allow Revit models to be easily imported in to Autodesk Viz 2005, complete with the Revit materials to create great rendered images. This is great news, especially as the AccuRender component in Revit, is starting to show its age.

3D ACIS Solid Support – While this may seem an odd addition, Revit now has the ability to bring in ACIS 3D solid data (this may be Autodesk’s interpretation of ACIS created by their ShapeManager variant, as opposed to true ACIS solids). It means that elements like Mechanical parts (boilers etc.) can be brought into and displayed within Revit models.

These are the new capabilities and is really just ‘the tip of the iceberg’ in terms of work done on Revit 7, there are many, many updates to the features and capabilities. While in the past much of what has been added to Revit has appeared to cater to the niche wishes of the few hundred customers, Revit 7 appears to make in-roads to completeling on the Single model approach to architectural design. The structural elements and API are probably the two additions that will grow the product the most.