From desktops and clusters to virtualisation and Vespas, the show floor at last week’s Fujitsu Forum in Munich offered plenty for design and engineering firms to sink their teeth into. In particular, there were some interesting new developments for Small to Medium Enterprises (SMEs) with a desktop workstation that can deliver 3D CAD to up to 16 users via thin clients and a High Performance Computing (HPC) appliance designed to take the pain out of deploying a simulation cluster.

All eyes were on the new Intel ‘Haswell’ Xeon E5-2600 v3 Celsius desktop workstations that Fujitsu launched in October – the single processor Celsius M740 and the dual processor Celsius R940. Both feature an abundance of CPUs and professional GPUs – the biggest choice out of all the major workstation manufacturers – as well as DDR4 memory, improved cooling, a handy carry handle and optional PCIe-based SSDs. (Read our in-depth report into these new machines).

While demos of SolidWorks and 3DXcite Deltagen helped put the technology in the context of design and engineering, there’s nothing like a vintage white Vespa to pull in the crowds. Attendees could sit on the classic two-wheeler, don an Oculus Rift headset and experience a 360-degree virtual drive through the Bavarian countryside with no need to keep your eyes on the road. 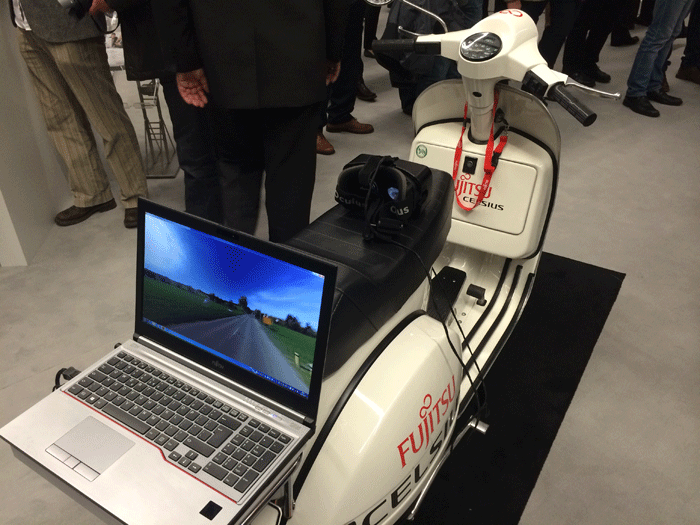 The technology that went into producing this immersive experience was impressive. Six GoPro cameras, mounted on the head of the driver, had captured the journey from all angles. The HD footage was then stitched together using a powerful Celsius workstation, processed overnight just in time for the start of the exhibition.

Swapping wheels for wings, Fujitsu brought Tokyo and London to life on an 80-inch 4K panel displaying these ‘360 Cities’ from a bird’s eye view. At first glance the images look like any other cityscape, but thanks to stunning gigapixel photography it is possible to zoom in, and then a whole lot more, to reveal incredible detail – think facial expressions from thousands of metres away. 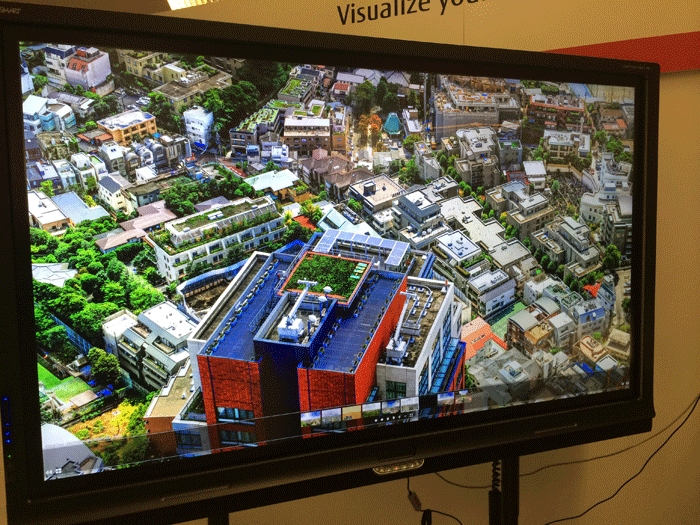 The level of pre-processing required to produce these giant datasets is huge. Hundreds of megapixel images are stitched together using the Panoramic image processing software Kolor Autopano. A 24 core Celsius workstation with 192GB RAM delivered the horsepower. KRPano software is used for viewing with the relatively smooth transitions between zoom states made possible with a powerful Nvidia Quadro K6000 GPU and a fast SSD array.

Moving from visualisation to virtualisation, Fujitsu set aside a considerable amount of floor space to promote the remote capabilities of its Celsius R940 desktop workstation, supported by Nvidia GRID GPUs, a Citrix virtualisation stack and Fujitsu Futro S920 thin clients.

While the Celsius R940 can be placed in a 5U rack, it’s at its most interesting when kept as a desktop. With claimed support for up to sixteen 3D CAD users from a single R940 workstation, small design and engineering firms can get themselves a Virtual Desktop Infrastructure (VDI) capability without having to invest in a rack or datacenter.

This is a pretty unique proposition among Tier One workstation manufacturers, as Fujitsu is the only one to offer Nvidia GRID K1 and K2 virtual GPUs in a desktop workstation. 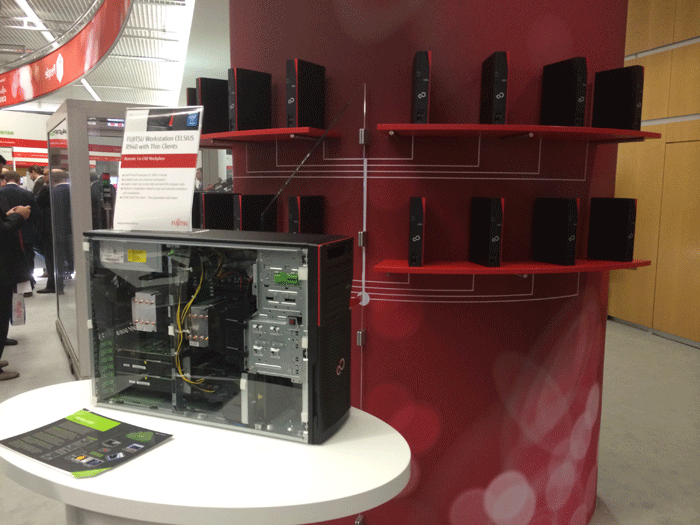 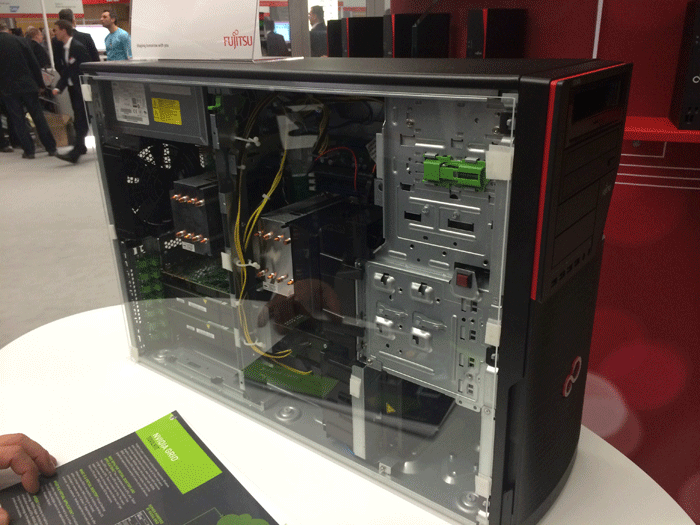 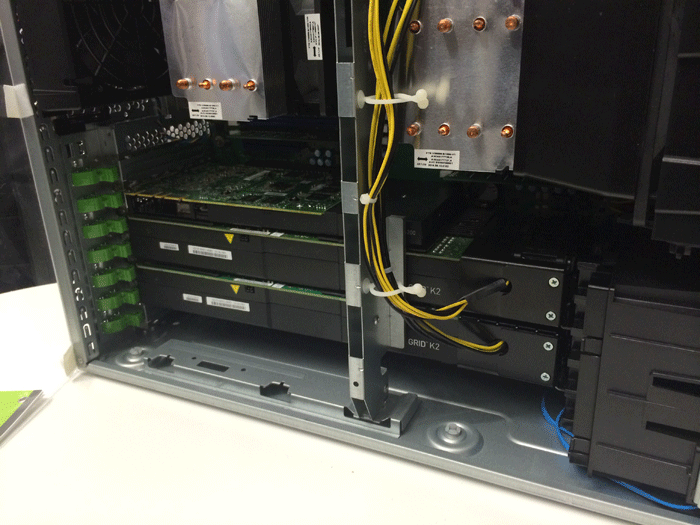 Nvidia GRID GPUs are almost always found in the datacenter, but Fujitsu has developed and manufactured a custom cooling solution, complete with temperature sensor and fans, so it works like a standard desktop GPU.

Fujitsu’s 1U Celsius C620 rack workstation also had a presence on the show show, bolted onto the side of a desk it was used to demonstrate remote access with Teradici PCoIP technology.

With a quad core processor, 32GB RAM and a single GPU, the Celsius C620 is pitched at design and engineering firms who want the simplicity and performance benefits of a datacenter rack workstation on a one-to-one connection. You can read our full review here. 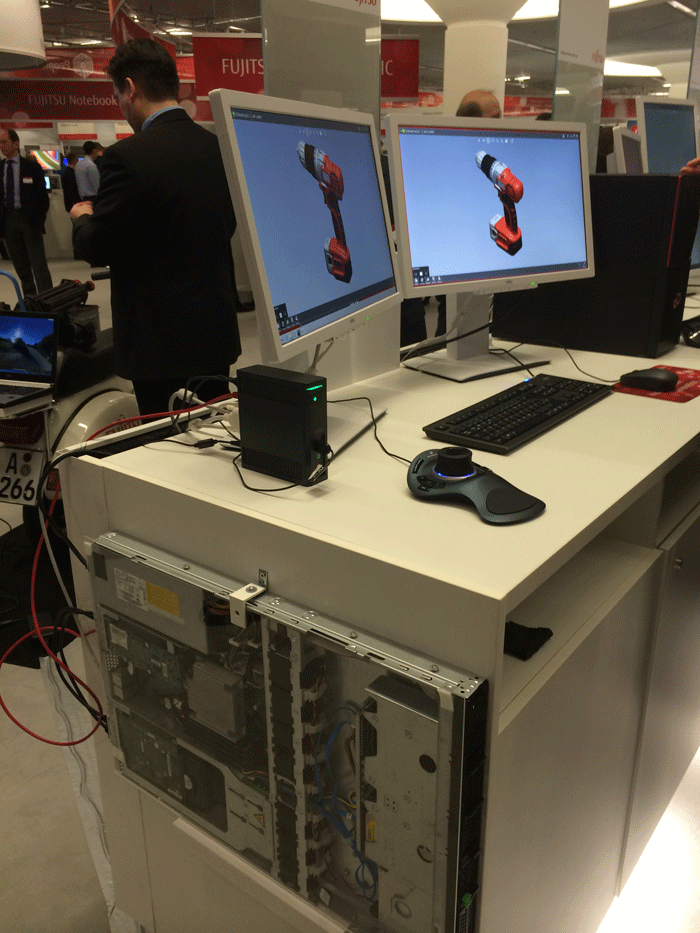 For CAD on the go, the Celsius H730 mobile workstation also had an outing. The standout feature of this 15-inch CAD-focused laptop is Fujitsu’s PalmSecure technology, which uses palm vein authentication instead of the usual corporate fingerprint scanner. 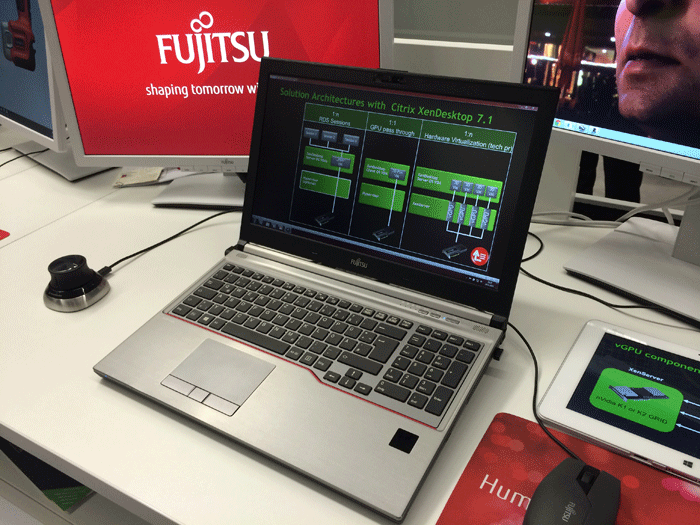 Fujitsu has big plans for PalmSecure. The technology, which scans unique patterns in the veins of the palm, was all over the show floor, including a commercial ATM that is already out in the market dispensing cash. 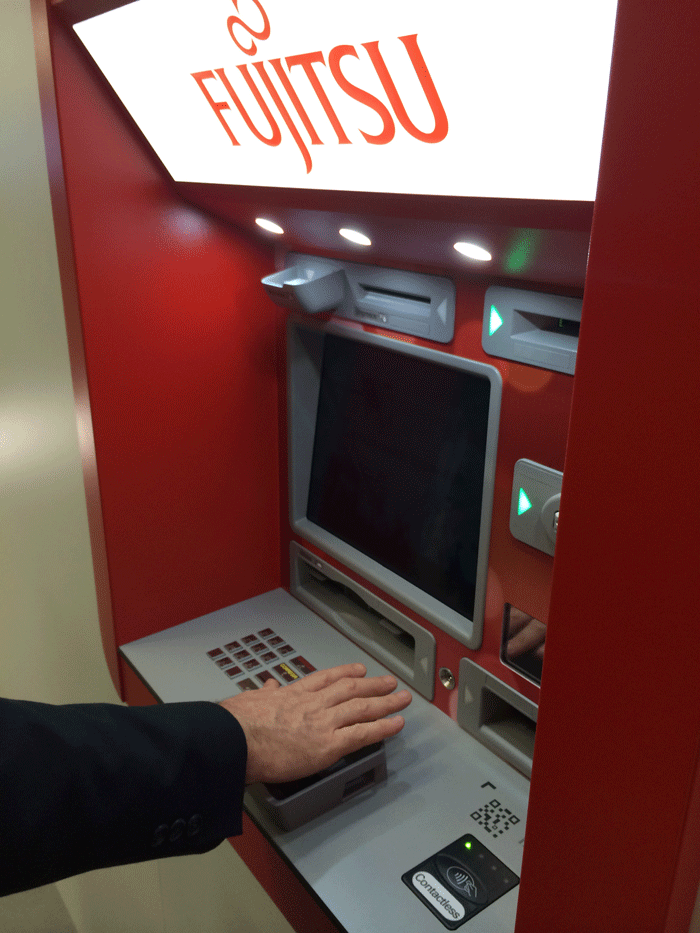 Concept design also had its own stand, with a professional product designer sketching in Autodesk SketchBook on a Fujitsu Tablet Stylistic Q704, powered by pressure-sensitive Wacom technology. This ‘semi-rugged’ 12.5-inch convertible features a 12.5-inch HD display with pen and touch input a 4th gen Intel Core i7 processor and a dockable keyboard. 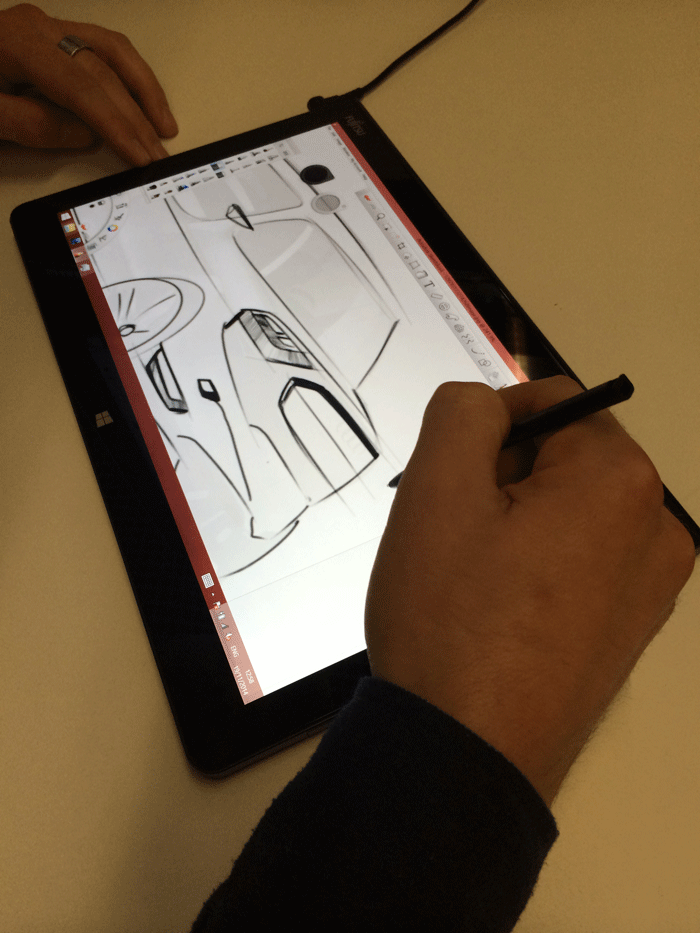 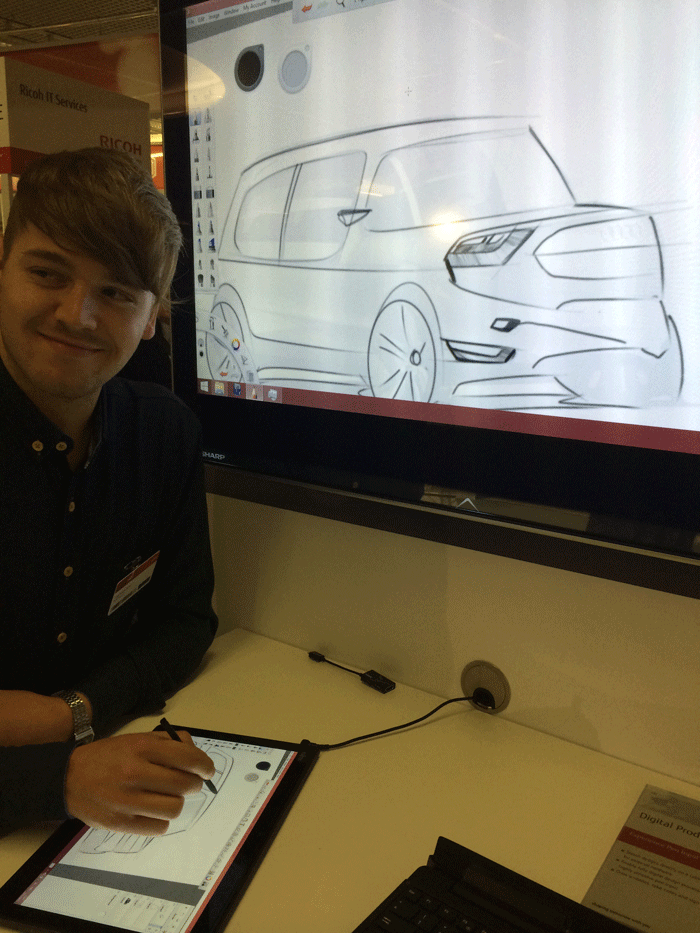 Swapping desktop for the datacenter, there was also a massive focus on High Performance Computing (HPC) for applications such as Computational Fluid Dynamics (CFD), Finite Element Analysis (FEA) and ray trace rendering.

In terms of hardware, Fujitsu’s HPC offering centres on the new Fujitsu Server Primergy CX400 M1, which can pack a total of four server nodes into a 2U chassis. 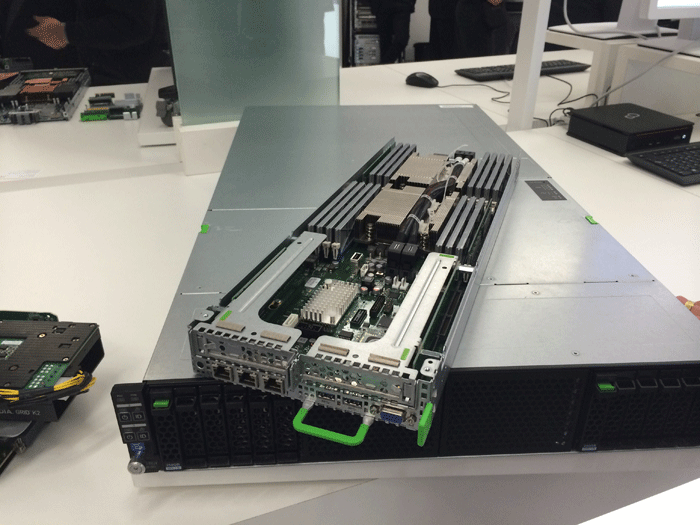 There’s also a 2U node that can boost the computational power for OpenCL or CUDA-based application by matching two Intel Xeons with two Nvidia Tesla GPUs or two Intel Xeon Phil Co-processors. A total of twenty Primergy CX400 M1 servers can be squeezed into a standard 42U rack, which packs a serious punch for complex engineering simulation. 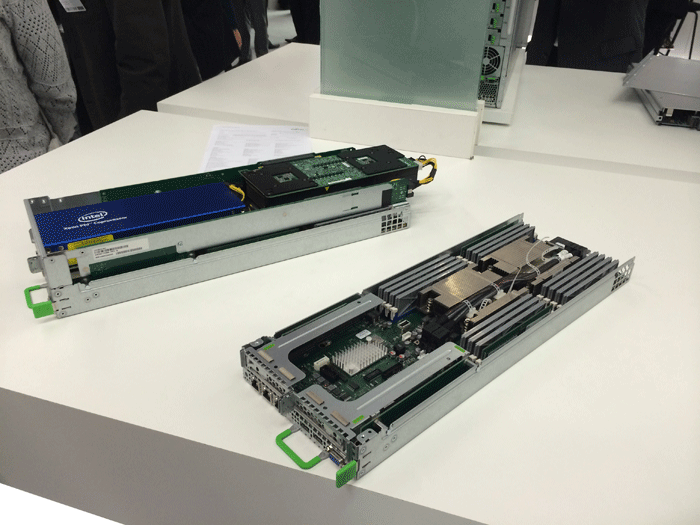 Fujitsu acknowledges that HPC is far more than a powerful rack of processors though and is also placing a big emphasis on software. Its HPC Gateway and HPC Cluster Suite (HCS) forms part of a purpose-built HPC software stack designed to eliminate the complexity of deploying, managing and using a HPC cluster.

Large design and engineering firms are the obvious targets for this technology but Fujitsu also sees a big opportunity with Small to Medium Enterprises (SMEs) who want much faster solve times than a desktop workstation can deliver but don’t have the in-house expertise to build, configure or maintain their own Linux cluster.

Fujitsu’s solution to this challenge is a smaller scale cluster called Ready-To-Go+ (RTG+), a so called ‘appliance’ that includes all the required hardware – head node, compute nodes, Infiniband and Ethernet Switch – plus a complete software stack including the simulation software.

RTG+ is currently only available for Comsol Multiphysics, and only in Germany, Austria and Poland, but Fujitsu is also talking to other CAE software developers to expand this. 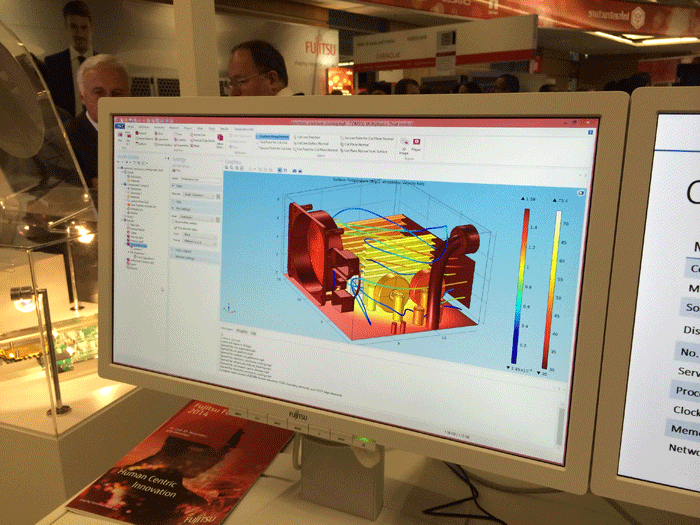 With prices starting at €50,000 this HPC appliance looks to be an interesting proposition for smaller firms that want to embed simulation more deeply into the product development process. The promise of faster turnaround times of solves, means more design iterations and the ability to analyse more detailed or sophisticated simulation models.