Safely through the release of ArchiCAD 13, Graphisoft has just announced the launch of ArchiCAD 14, due to ship next month. Martyn Day had a chance to see the new features and updates in action.

Building Information Modelling (BIM) has come a very long way in the last five years. In an industry that has traditionally been very slow to adopt 3D technology, the adoption of modelling over drafting is now reaching critical mass.

Mechanical, electrical, plumbing (MEP)/high-efficiency heating, ventilation and air-conditioning (HVAC) and structural engineering were quick to adopt 3D. Now more and more architectural firms are piloting BIM in research projects and evaluating the alternatives. There are even a number of large practices now going through company-wide implementation.

The real-rime rendering of shadows in OpenGL is useful for sun studies, as well as giving the modelling environment an added touch of realism.

While Autodesk’s Revit is easily the best known BIM tool and Bentley’s MicroStation suite has an established fan base in London practices, there is growing interest in ArchiCAD, which is the most mature and flexible architectural modelling product on the market.

Release 13 of ArchiCAD was newsworthy for the right reasons. In a groundbreaking update, Graphisoft concentrated on the one big issue that BIM had neglected to tackle: team working.

In a rush to flesh out the intelligent components and modelling capabilities of this new generation of tools, the fact that multiple people and teams needed access to a single model, without having to resort to cutting up the model, was easily overlooked. ArchiCAD 13 contains the best teamwork solution I have seen, in both ease of use and capability, and a year on, it is still well ahead of the game.

The theme for this year’s release, shipping mid-June, is again collaboration but from a slightly different angle, looking at how ArchiCAD could work better in an integrated structural and MEP workflow.

This development work is heavily based on Industry Foundation Classes (IFCs), which are the best hope of actually exporting and importing the complex data sets that BIM modelling tools output. While I was certainly disillusioned with the early work done by the IFC committee, the format has evolved and gained traction at government level in many countries. Graphisoft has always been the closest to the format and this release benefits from its years of work on IFC translators.

ArchiCAD is best known as an architectural modeller, but with this release Graphisoft is aiming to pitch the tool closer to the heart of the multi-discipline practice. Using model filtering, designers can easily apply classifications to elements within the model and then filter the output. In previous IFC exports, the structural engineer would be inundated with the complete model, as opposed to just the elements that were required to perform building analysis. By spending a small amount of time properly labelling up the elements, export filters will only output the IFC definitions of geometry that are desired. In some ways by using this tool, architects will also change their approach to modelling by thinking about what is load bearing and what is not, what is interior and exterior, to ease the export of future designs.

Once a model is defined, it is possible to view a structural model as defined by this IFC filter within ArchiCAD. When it comes to actually exporting this, Graphisoft has greatly simplified the process, tailoring with optimised translators for the target platform, DDS-CAD, Allplan, Revit Structure, Revit MEP, Scia and Tekla.

To assist at the other end of the process, Graphisoft has also created import applets for Revit Structure, which is a free download off the Graphisoft website. Autodesk’s support and IFC compatibility is not seen as being particularly well implemented, so unusually, Graphisoft has opted to improve the IFC translators with this add-on. Perhaps this is an acknowledgement that Revit Structure is growing in usage and ArchiCAD needs to be able to work with other systems, even if its IFC capabilities are lacking. In the case of Revit, the Graphisoft applet enhances its ability to work with ramps, complex profilers, walls and beams. 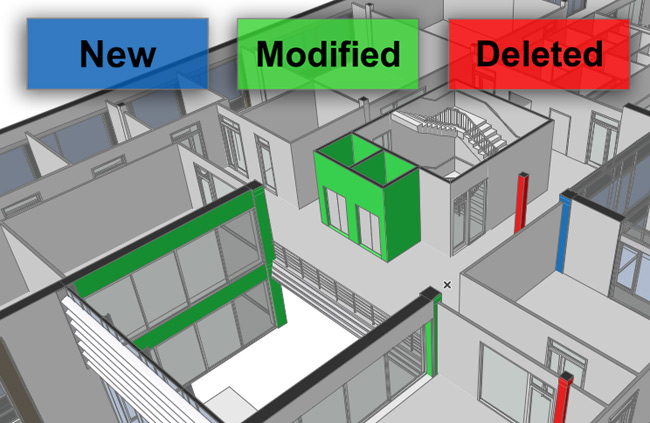 Both export and import functions have been simplified and enhanced. Recognising that data is not a one way process in building design and that once exported it is highly likely that revised data is going to come back, Graphisoft has done some really good work on making ArchiCAD excel in a multi-discipline environment.

Termed ‘model referencing’, IFC files can be selected together with a translator for that discipline or product output. This imports the tagged geometry, allowing, for instance, the structural and MEP models to be displayed together with the architectural model. Using wireframe or shaded modes, ArchiCAD suddenly performs a very important task, being the single truth of all the components in a building. Naturally this can be used for clash detection. This is very powerful and would traditionally only be possible in products like Autodesk Navisworks, which cost twice the price.

As changes are in the very nature of design, ArchiCAD can also be used to compare and contrast imported model files, indicating changes using a simple colour-coding key to indicate where the geometry differs. It is possible to quickly select and zoom to all the changes in the model.

With this new version, Graphisoft has pushed for the middle ground in the BIM market. ArchiCAD is a great architectural modeller but now it is also a place to combine, check and interrogate BIM models from all the key 3D modelling solutions.

In short, ArchiCAD is becoming a useful tool for firms that want to move to BIM but have data translation problems. Unfortunately, in this industry that is pretty much everyone, so for those companies that have chosen to use IFCs in their data exchange it is worthy knowing that nobody does IFC support as well as Graphisoft.

Outside of this development work there have been many enhancements and updates to existing functionality. The most notable of which is the inclusion of support for survey data. ArchiCAD can now import X, Y, Z data from data loggers to automatically create a meshed terrain model. This can be manipulated and used to create more complete models. To do any site work such as cut and fill, it is recommended that ArchiTerra is used, developed by Cigraph in Italy.

By combining the architectural, structural and MEP models, ArchiCAD can be used to find clashes between geometry. Here the ductwork can be clearly seen clashing with the window frame.

OpenGL capability has been boosted to support OpenGL shadows, which significantly enhances the display of models when looking at sun studies. There is a big update to the existing library of parts, including a host of cars that can be animated. Dimensions can now include user-edited prefix and suffix labels. The offset command finally enters the 20th century and behaves as you would expect.

There has been a lot of effort placed on performance and users can expect important procedures such as generating door schedules to improve by five to six times. Time to open libraries has been improved and schedules can be exported to excel in one click.

Eco Designer was Graphisoft’s answer to Autodesk buying Ecotect and version 14 has been updated with more green energy supply options, including biomass boilers and more photovoltaic options. Users can also play with the values as opposed to specifying materials. This can aid the choice of materials as opposed to the other way around.

Overall accuracy has been enhanced and the results are significantly more detailed, includes carbon footprint information and will soon support LEED and BREAM energy specification.

The fantastic Teamwork feature introduced in the last version has been updated with improved reservation methods. It is now possible to reserve elements directly from schedules and face pictures can be added to profiles. The BIM server can now be 64-bit Mac OS and there are new tools for central management, with new functions like the ability to monitor the server statistics, how much data, who is sending what, the CPU usage, access rights and roles.

‘Pack and go’ is a new feature that allows reserved elements to be checked out and stored onto a memory stick so they can be worked on outside the office, without having to take the whole model.

Other improvements include filtering while importing DWG files, Save to DWG the elements selected with the marquee tool, support for 48 skins in a composite element, a cool library migration tool and more flexible ‘soft key’ licenses.

National Building Specification (NBS) is the most widely used specification system. While not really part of the new version, Graphisoft UK with RIBA Enterprises have done some additional development to enable these specification clauses to be added to ArchiCAD models. It is simple to apply specifications using text or the labelling tool. Any updates to the specifications will be applied automatically in all views.

For now this product is Windows only (ArchiCAD is also available on the Mac). This is available for a small additional cost per licence per year.

ArchiCAD 14 can now import X, Y, Z points from data loggers and will automatically create a terrain mesh for inclusion in designs.

Since Graphisoft was acquired by German developer Nemetschek there has not appeared to be a lot of changes in the way it works. On the one hand you could say that this is a good thing but on the other it does make me wonder why Nemetschek is not combining its rich multiple product lines and making the most of the many technologies that it owns.

Nemetschek seems to prefer to be a collection of brands, as opposed to its competitors, Autodesk and Bentley, which offer suites of products from, conceptual, through 3D design to complex rendering. I cannot help but think that Nemetschek is missing a trick here.

As for this release, it certainly builds on an excellent version 13 and introduces new capabilities for firms that are struggling with BIM data exchange and round tripping. While Navisworks is a great solution, in terms of being able to import and display geometry, ArchiCAD speaks IFCs, which means that less intelligence is lost in combining files to build a complete data model. Once imported all the intelligent tools can be used to interrogate, document and extract model information.

ArchiCAD 14 embodies a clever strategy to make the product appeal outside its traditional architectural clientele, by engaging with structural and MEP solutions, easing export and aiding round tripping and import.