The $999 GPU is equipped with 32GB of GDDR5 memory (four times that of a single Radeon Pro WX 7100), which will allow it work with much bigger datasets.

For VR, the Radeon Pro Duo can use each of its two GPUs to render out separate images for each eye. AMD says that this can increase VR performance over single GPU solutions by up to 50% in the SteamVR test. It should be noted, however, that not all VR engines can currently make use of dual GPUs, but support will likely increase in the future. For GPU rendering, the Radeon Pro Duo boasts a total of 72 compute units (4,608 stream processors) for a combined performance of up to 11.45 TFLOPS of single-precision compute performance, double that of the Radeon Pro WX 7100.

AMD benchmark figures show the Radeon Pro Duo to be 2.13 times faster than the Radeon Pro WX 7100 when rendering with Radeon ProRender for Maya. AMD’s GPU-optimised, physically based renderer is also available for 3ds Max, SOLIDWORKS (beta) and Rhino (beta).

AMD has also shared performance figures for V-Ray standalone. When using the denoising tool it reports that a system with the Radeon Pro Duo (Polaris) is 86.93% faster than a system with a Radeon Pro WX 7100.

The Radeon Pro Duo is also designed for multi-tasking, allowing users to using multiple applications by committing GPU resources to each. For example, 3D CAD on one and GPU rendering on the other. It benefits from certifications from pro-grade software including media, entertainment, CAD and engineering.

In terms of displays, it can drive up to four 4K monitors at 60Hz via 3 DisplayPort outputs and one HDMi. It can also drive the latest 8K single monitor display at 30Hz using a single cable, or drive an 8K display at 60Hz using a dual cable solution.

The Radeon Pro Duo operates at a max power of 250W and needs an 8-pin and 6-pin auxiliary connector to draw additional power direct from the PSU. It will be available at the end of May. 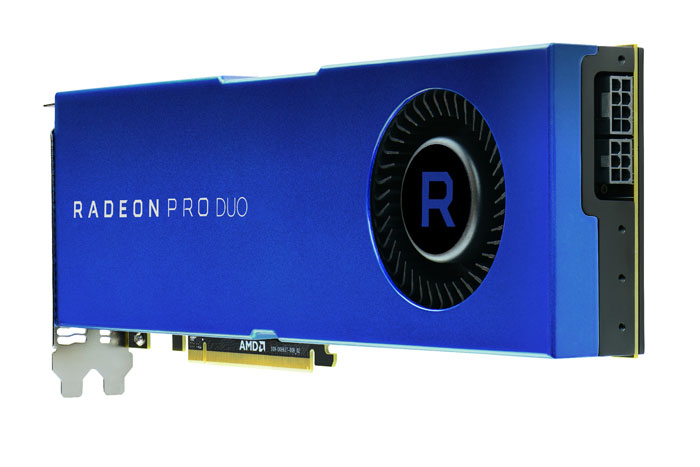