Greg Corke reports on a powerful tool for civil engineers that has the potential to revolutionise the role of design visualisation throughout the design phase.

Design visualisation is an established process in many architectural practices and a given for any large-scale development, but visualisation for road and rail civil engineering projects is still seen as a luxury by many.

While high-quality visuals are often put out to specialist third-party design viz bureaus for public exhibitions, when it comes to using visualisation to help drive decision-making in the design process, many engineering firms are reluctant to invest time and money. Being able to create realistic images and animations efficiently is a major challenge in itself, but then you are faced with the problem of how to protect your investment when design changes occur.

Dynamite VSP from 3am Solutions has been designed specifically to overcome these problems by providing civil engineers with the tools to turn complex 3D design data into accurate rendered images and animations quickly and easily. But, more importantly, as the project evolves and alignments and superelevations change, the visualisation can adapt itself to the new design automatically, so little or no rework is required on behalf of the user.

The software harnesses the power of 3ds Max Design, Autodesk’s dedicated design visualisation application, but uses a customised user interface aimed squarely at the civil engineer to provide easy access to the most important functions. This simplifies the process so that first time users are not scared off.

Dynamite VSP works with most 3D civil engineering applications including AutoCAD Civil 3D, MX Road, InRoads and Geopak and 12D Model. The most efficient partner application is arguably Civil 3D, because the software automatically recognises Civil 3D components by name and type and is able to automatically apply materials, textures and objects accordingly. With MX Road, for example, each user’s or organisations’ naming convention must be manually assigned, so careful planning is required to get the best results.

While Dynamite VSP will read in MX data directly into the system, Civil 3D users must first export their data to an intermediary VSP3D file. This is generated by a dedicated Civil 3D plug-in, which is available for free download from 3am Solutions’ web site.

The VSP3D file exporter for AutoCAD Civil 3D is free to download and is required to get data into Dynamite VSP.

One of the golden rules of visualisation is to keep data simple and import only the information you need so the use of a dedicated export plug-in for visualisation purposes also has its advantages as users can strip out unnecessary data at the export stage. For example, while the sub-surface construction of a road may have been modelled in Civil 3D, only the top surface of the road is generally required for the visualisation.

Realistically mapping textures and materials in 3ds Max Design has traditionally been a time consuming task, but it becomes even more laborious when a design changes and it has to be done all over again. With Dynamite VSP, as the data is imported, it identifies linear features and can automatically apply texture maps and materials for road surfaces and kerbs so they appear realistic when rendered. These are taken directly from Dynamite VSP’s library so the user doesn’t have to get to grips with 3ds Max Design’s material editor if they don’t want to.

In addition to being able to map materials automatically, Dynamite VSP can also automate the placing of objects in a scene and give users control over the process.

To do this it uses ‘style definitions’ so when the user carries out an operation, they can save what they’ve done so it can be recreated instantly at a later date. For example, a camera path can be defined to follow an alignment, road markings generated to always appear on centrelines, or street furniture can line the side of the road at a specific offset.

Over time, the idea is that each organisation builds up a library of styles, which can be applied to different projects as and when required, with very little input required from the end user to populate a visualisation scene.

Most importantly, as all styles can be linked directly to imported Civil 3D carriageway features, if the design changes they will automatically update in relation to the new alignment.

Lighting columns, cars, cameras and signs can all be automatically placed relative to the geometry of the carriageway.

There are four main types of Styles in Dynamite VSP, with dedicated editors for each.

The Object Placement Style Editor can be used to place any type of object along or adjacent to the alignment. This includes lighting columns, signs, gantries, animated cars and cameras.

Cameras form the basis for any animation and while 3ds Max Design offers powerful tools for defining camera positions and paths, Dynamite VSP can define simple camera paths which immediately help users gain a better understanding of the model.

For example, an instruction could be defined which generates a camera 10m above the road and animates it to follow the centreline at a simulated speed of 60mph. This could then saved as a style so it can be repeated on any new stretch of road.

Object Placement styles can also be used to populate scenes with street furniture. For example, lighting columns can be inserted so they automatically follow the centreline of the carriageway at a defined offset and interval along the alignment. The software is intelligent enough to ensure that each bracket arm is placed perpendicular to the centreline.

In Dynamite VSP lighting columns are parametric in nature and height and bracket arms can all be defined. However, if an individual column needs to be adjusted it can be broken out of its group and edited individually. 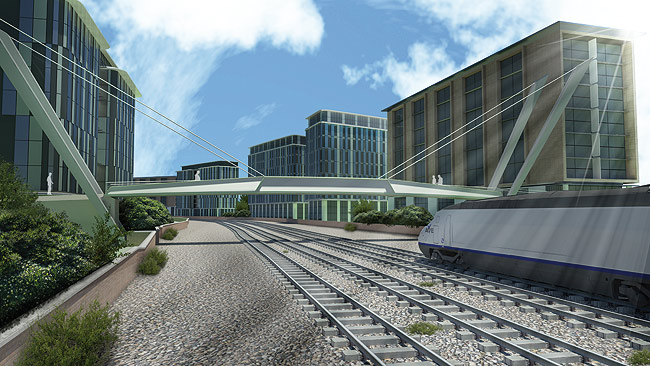 While highway visualisation is the most common application of Dynamite VSP, it can also be used for railways. Image courtesy of Arup.

In addition to following a specific alignment, objects can be made to track an underlying ground surface. This capability can be used to animate randomly generated vehicles moving at a designated speed along a stretch of road, ensuring that they follow highway superelevation.

The Swept Object Style Editor is used to model structural objects that follow the alignment such as noise barriers, retaining walls, bridges and tunnels.

Bridges are an example: built up element by element, in relation to the imported feature lines of the carriageway. Again all parametres that define the constituent parts of the bridge deck profile can be saved to a style to be re-used on any alignment.

The Road Markings Style Editor can be used to associate road markings to specific imported features. For example, any feature can automatically have applied to it a marking of a set distance, width and gap. Over time, a number of these can be built up to a library depending on the road’s design type and speed. Finally, Rail Object Style Editor can be used to define styles for fences, guide rails, and even rai

In addition to being able to create styles and use them interactively, the real power of Dynamite VSP comes into play when styles are directly associated with Civil 3D elements as an integral part of the import process. For example, if a feature line of a certain name is imported, then the system can automatically populate it with any combination of Dynamite VSP style definitions. In effect this enables the user to create a one click visualisation for any new project, which turns it into to an extremely powerful tool. Of course, there will always be adjustments and tweaks to be made, but the foundation for a design visualisation can be set up extremely quickly. 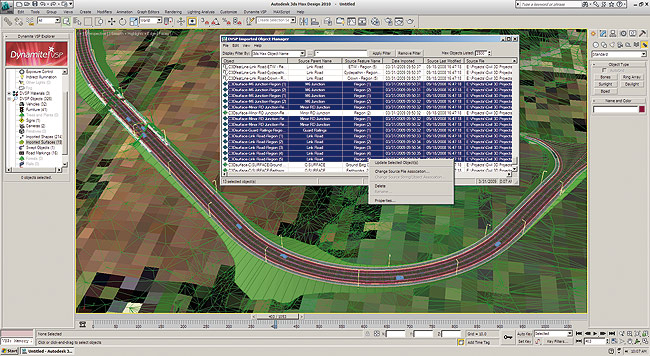 Any design changes made inside Civil 3D can be re-imported into Dynamite VSP and all light columns, cars, and road markings etc, will be adjusted automatically.

Once a scene has been set up, it is ready for rendering. As each frame in any animation needs to be rendered, and with fly throughs often running for a few minutes at 25 FPS that’s an awful lot of rendering power which can take some time. However, new generation multi core workstations, such as the HP Z800 on page 34, are extremely adept at handling such calculations and network rendering is also supported inside 3ds Max Design so you can make use of spare workstations in out of office hours.

For those that need instant feedback, or perhaps wish to explore their designs in real time, the latest version of 3ds Max Design (2010) has enhanced the quality of real time rendering in the viewport and there are tools, such as VR for Max (www.vr4max.com), which enables users to navigate and interact with fully rendered 3D models in real time.

While not directly related to rendering, it’s worth mentioning that 64-bit support in the soon to be released version 4 of Dynamite VSP will also increase capacity for working with larger models. 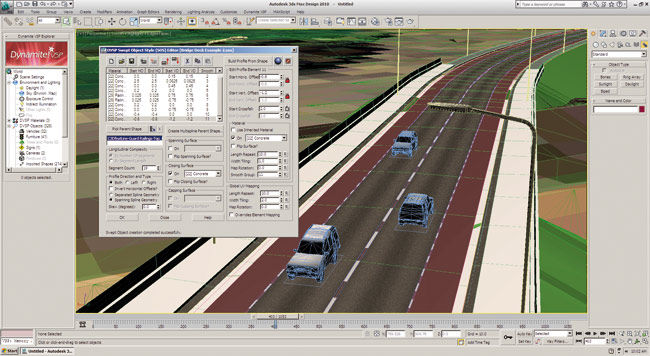 Swept Objects, such as this bridge are built up element by element, in relation to the imported feature lines of the carriageway.

While Dynamite VSP is able to populate its roads with vehicles, randomly generated in terms of their position, style and colour, there is little science to the behaviour of cars apart from they can be set to run at defined speeds. To add more realism to animations, Dynamite SIM is an optional add-on for Dynamite VSP, which allows real time traffic simulation data from third party applications such as VISSIM (www.ptv.de) to be imported. While VISSIM itself features simple animation tools, by bringing such data into a much more realistic visualisation environment can help engineers to more effectively communicate design in a wide range of traffic and public transport projects.

The developers of Dynamite VSP have done an excellent job of putting the civil engineer in control of the design visualisation process, something that was previously the reserve of the 3ds Max specialist. The software works on the premise that if you can efficiently produce visuals, and more importantly amend them easily when designs change, then visualisation can become an essential part of the design process and not just a tool for making ‘flashy’ animations.

Dynamite VSP not only helps engineers and other stakeholders understand the impact of designs better, but it can also be used to help make specific decisions on anything that involves visual checking. For example, where to position signs and how their placement will impact sight lines.

The beauty of Dynamite VSP is that you can start off with basic visualisation, and then build on your investment as the design progresses. It’s incredibly easy to use and while a knowledge of 3ds Max Design is not required, all of the functionality of Autodesk’s powerful design viz solution is there should you need to take visuals to the next level.

With this in mind it’s not only engineers that can benefit, but even those gifted with 3ds Max skills as it can take make such light work of all the laborious modelling tasks.

In summary, Dynamite VSP is one of the most impressive products I have seen for a while. It’s certainly niche, but the way in which it takes a complex process and simplifies it by adapting itself to any design is incredibly clever. Highly recommended.