The Radeon Pro SSG features 2TB of total on-board memory, made up of 16GB of HBM2 memory and an on-board 2TB NVMe SSDr

For design, engineering and architecture the new GPUs will mainly benefit those involved in design visualisation, GPU rendering or Virtual Reality (VR). Both GPUs offer a huge leap up from their predecessor, the AMD FirePro W9100. AMD states that models run more than twice as fast, delivering over 2.6x the peak throughput-per-clock. With up to 12.3 TFLOPs of peak single-precision performance (compared to the FirePro W9100’s 5.24 TFLOPs) both GPUs should also dramatically cut render times in physically-based renderers like Radeon ProRender. 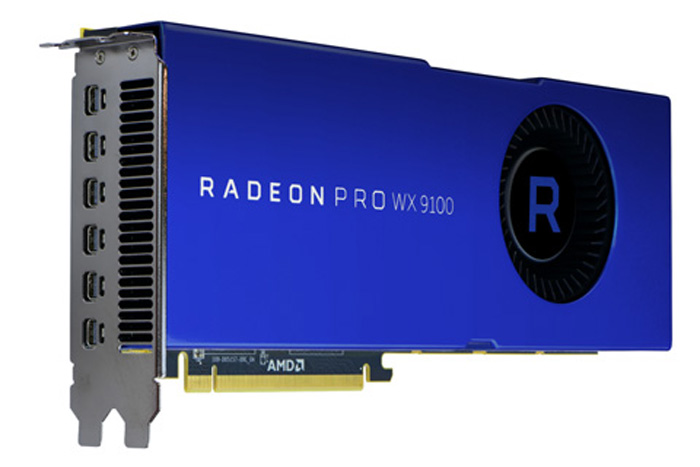 The Radeon Pro WX 9100 and Radeon Pro SSG are also significantly faster than the single slot Polaris-based Radeon Pro WX 7100, which is only suitable for entry-level professional VR. The new GPUs should not only be able to deliver the required 90 Frames Per Second (FPS) in more pro VR software tools than the WX 7100 could handle, but also support higher quality visuals and more complex datasets in applications like Autodesk VRED and Unreal Engine.

On paper, both GPUs offer the same core performance (up to 12.3 TFLOPs of peak single-precision performance) and memory (16GB HBM2 memory) but the SSG completely changes the game when it comes to working with huge datasets.

Whereas professional GPUs were previously limited to 32GB of memory, the Radeon Pro SSG features fast, direct access to a colossal 2TB of on board “Solid State Graphics” (which is essentially a 2TB NVMe SSD).

Traditionally, if datasets exceeded the amount of on-board GPU memory, data would have to be fetched from the workstation’s SSD or system memory, via the CPU, and then streamed into GPU memory over the PCIe bus, which can be very slow. In some workflows running out of GPU memory simply makes the process stall. With the Radeon Pro SSG, the data can be accessed very quickly – so quickly in fact that AMD markets the SSG as having 2TB of total on-board memory. 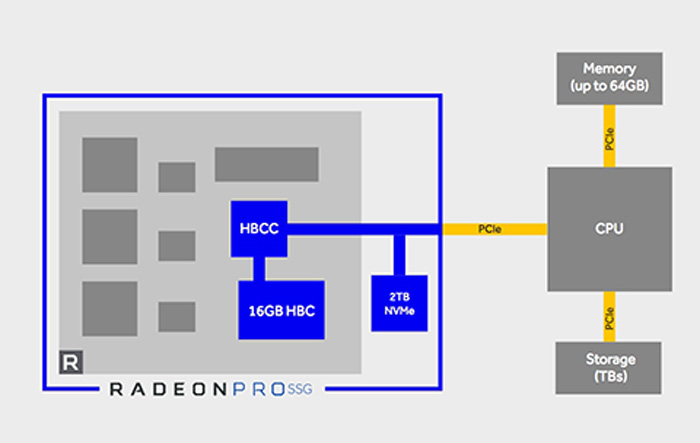 So where does this leave the Radeon Pro WX 9100? AMD says this GPU can also work with datasets that are larger than its 16GB of on-board memory, thanks to the new memory system, which includes a High Bandwidth Cache Controller (HBCC).

AMD has demonstrated a Radeon ProRender scene that ‘easily exceeded’ the on-card memory capacity of the Radeon Pro WX 9100 but ‘ran smoothly’ as the HBCC automatically extended local memory. According to AMD, the same scene would not load on competing offerings because of an out-of-memory error.

For design visualisation, AMD has previously shown demos of how its SSG technology could be used to support a navigable ‘photorealistic’ 3D environment.

AMD has also alluded to how SSG technology could streamline simulation (CAE) workflows. Traditionally, when using the GPU to solve FEA or CFD problems, the CPU has to break down jobs into bite sized chunks that can be loaded into the available GPU memory. With SSG, it sounds like it would be possible for one GPU to solve extremely large problems.