HP has updated its desktop Z Workstation line up with the introduction of the Z440, Z640 and Z840

It’s not often both sets of processors get updated at the same time so HP is calling this a step change in terms of performance. We tend to agree.

Let’s have a look at each machine in turn:

This is HP’s mainstream 3D CAD workstation. It features a single Xeon CPU, a massive choice of professional GPUs, up to 128GB of RAM and up to four 3.5-inch drives.

Out of all the new HP workstations the HP Z440 has arguably undergone the most radical change. It has a completely redesigned tool free chassis, smaller than the Z420 it replaces, and is less than 7-inches wide (16.9 x 44.5 x 43.2 cm). 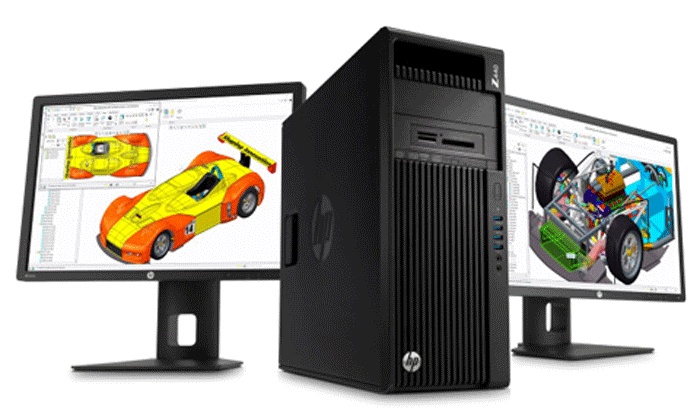 HP says the driving force behind this change was so the chassis can fit into a 4U rack. While the Z440 is primarily a desktop workstation, some of HP’s customers rack-mount their machines. A power button at the rear, also a feature of the Z640 and Z840, makes it possible to cycle the system without having to walk around to the other side of the rack.

For most users, however, the action is at the front and here HP has updated the trademark industrial design with a new façade that is consistent across all of its new desktop Z workstations.

Gone is the standard 5.25-inch optical drive; in its place a 9.5mm slim optical bay. There are two flexible 5.25-inch bays above this, which can be used for front access storage, additional optical drives or media card readers.

Underneath the bays there are four nicely spaced USB 3.0 ports. The top one is ‘always on’ so smart phones and other devices can be charged when the machine is off. There are also ports for headset and microphone.

With another four USB 3.0 ports at the rear the machine is drowning in fast i/o thanks to the new Intel C612 chipset. ThunderBolt and Firewire are optional with add-in PCIe cards, as is dual-port gigabit and WiFi (single gigabit Ethernet is standard).

For moving around the office or placing into racks the Z440 now includes integrated front and back handles as standard.

Previously this was the reserve of its Z600 and Z800 series machines, and the Z420 only had an optional front handle. It’s nice to see these features finally start to trickle down from the high-end.

For a mainstream desktop workstation the CPU support is pretty impressive – with a choice of eight Haswell E5 Xeons, ranging from 4 to 8 CPU cores. 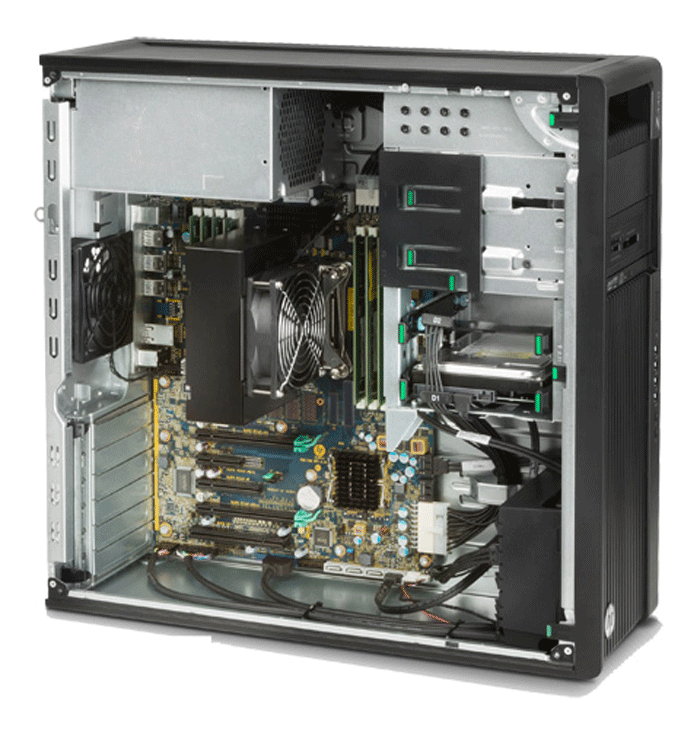 The HP Z440 workstation features a brand new, smaller chassis with an improved interior and handle at the front and back

With only 4 DIMM slots and 32GB DIMMs the HP Z440 hold up to 128GB. The big change is from DDR3 to DDR4, a brand new memory technology that HP says offers more power efficiency as well as performance.

For two GPUs, most likely for workflows that feature GPU compute, there are two PCIe 3.0 x 16 slots. An optional 700W PSU provides the power for two high-end cards.

HP is making a lot of noise about its Z turbo Drive, a PCIe add-in card that boasts double the bandwidth of SATA SSDs.

It’s available in 256GB or 512GB, which is plenty for OS and applications. For the bulk of your CAD data there’s SATA 6Gb/sec, with plenty of options for up to four SSDs, HDDs or SAS drives, from 128GB up to 3TB. The Z440 is not only smaller than its predecessor, but HP also claims it is quieter, despite having more powerful CPUs and GPUs.

According to HP, this is down to how its engineer team has layed out the internals.

There’s a new high-performance air-cooling solution for the CPU, based around a new heatsink. HP makes the rather bold claim that this new thermal solution is ‘equal to or better than’ the Z420’s liquid cooler.

There’s also a new memory cooler, one of the many fans that actively cool the machine in different areas. HP says fans can run slower, for ‘whisper quiet’ acoustics.

This is HP’s mainstream dual CPU workstation. It’s more of an evolution of the Z620 with a tweaked industrial design so there’s consistency across whole family of Z workstations – desktop and mobile.

For example, HP says the updated aluminium side panel has a new ‘stealth look’ which is much more in tune with its ZBooks. 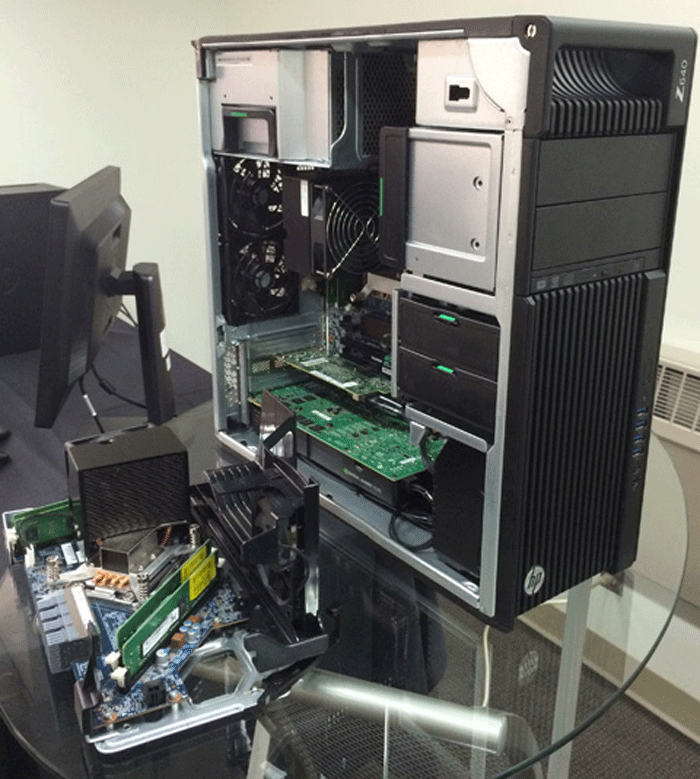 The HP Z640 features a riser board to make it easy to add for users to add a second CPU. it comes with CPU, heatsink and fan already installed

The HP Z640 features a riser board to make it easy to add for users to add a second CPU. it comes with CPU, heatsink and fan already installed. At 17.5 x 46.48 x 44.45 cm the Z640 is around the same size as the Z440 and has the same façade – slimline optical, flexible bays and plentiful USB 3.0 ports. However, inside it’s more refined, replete with green touch points that indicate serviceable components. Hard drives are tool free and have blind mate connectors.

The PSU is not completely cable free like it is on the Z840, but you can still remove with one pull on the handle and tug on a cable.

The PSU is rated at 925W, which means the machine can support two high-end CPUs and GPUs in a single machine.

This is a step up from the Z620, which was limited in some respects due to its 800W PSU, and meant customers that needed dual Quadro K5000-class GPUs were forced to go for a Z820. 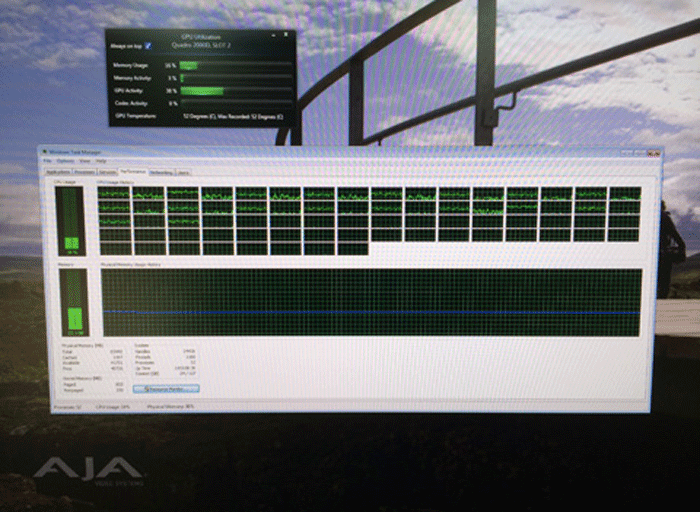 However, HP also pitches the Z640 as a single processor workstation for customers who may want to add a second CPU as and when needs change.

And HP has made it very easy for upgrades. Rather than having a second CPU socket on the primary system board, the Z640 features a riser board that the customer can slot in, in seconds.

The CPU, heatsink and fan are already installed so it’s a really ‘elegant way to add a second CPU.

According to HP, this also drives down the cost for single processor configurations and enables it to make the chassis smaller.

The Z640 has 8 DIMM slots (four per CPU), meaning a total of 256GB DDR4-2133 ECC Registered memory. There’s space for four 3.5-inch drives, plus a Z Turbo Drive, providing there’s a spare PCIe slot. The GPU options are identical to the Z440. 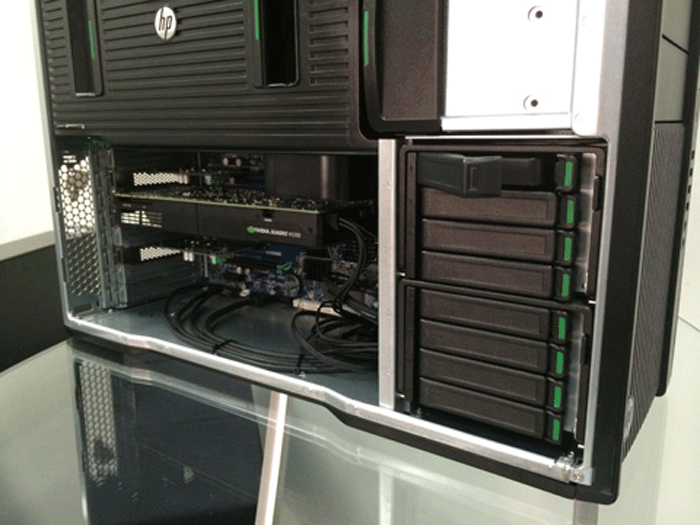 HP has adapted the main drive section to support eight 2.5-inch drives in the same space

It features a tweaked Z820 chassis with a similar front façade to the Z440 and Z640. On the top of the machine there’s a recess to rest phones and tablets while charging, or external HDDs.

HP places a big emphasis on low acoustics, and the Z840 features three cooling zones: a first for PSU, a second for CPUs & memory and a third for storage and i/o.

Each has separate sensors on the system board that control fans individually so each fan only spins as fast as it needs to.

Shrouds cover each section, which looks great in terms of industrial design though HP emphasises these aren’t just for show.

In the centre section ducts ensure each CPU receives fresh air, while holding dedicated tool-less fans for each memory bank. The bottom panel directs airflow and secures the PCIe cards.

By default the Z840 comes with four 3.5-inch drive bays, which are tool free and feature blind mate connectors. However, with the rise of 2.5-inch drives, particularly SSDs, this can mean there’s a lot of wasted space inside so HP has adapted the main drive section to support eight 2.5-inch drives in the same space.

Taking inspiration from the HP Z1’s single drive bay that can house one 3.5-inch drive or 2 x 2.5-inch drives, two 3.5-inch bays can be converted into four 2.5-inch bays, while still retaining tool free access. Users can also put OS and applications on drives in the 5.25 drive bays (RAIDed together if so desired) then use the eight 2.5-inch drives for data. In terms of CPUs the Z840 can host all the same processors as the HP Z640, but can also add 160W processors into the mix including the Intel Xeon E5-2687W v3 (3.1 GHz, 25 MB cache, 10 cores). With 16 memory slots it can also support 512GB memory, which will rise to a whopping 2TB when 128GB DIMMs become available.

All machines begin shipping on October and come free with HP Performance Advisor software, which helps non-techies get the most out of their workstation and HP RGS for remote workstation access. Look out for a full review soon.