Nvidia is bringing its RTX ray trace rendering technology to the mobile workstation platform with a new range of Turing-based GPUs, the Quadro RTX 5000 (16GB), RTX 4000 (8GB) and RTX 3000 (6GB). The new lineup will be available in mobile workstations from global OEMs like Dell, HP and Lenovo.

All of the new models are VR Ready, look well suited to real time visualisation and are heavily focussed on ray trace rendering. They feature dedicated RT (ray tracing) cores and Tensor cores, which are used for AI denoising. So instead of having to wait for the GPU to compute thousands of passes, it can conduct a few passes and then use deep learning to remove the noise. It essentially gives a best guess as to what a fully resolved image would look like.

To take full advantage of the new mobile GPUs, applications have to be RTX-enabled and we expect this to come in the next releases of V-Ray, Unreal Engine, Enscape, Autodesk VRED, Solidworks Visualise and many other pro viz applications.

RTX Studio laptops are powered by a range of GPUs, including the Quadro RTX 5000 and GeForce RTX 2080, 2070 and 2060. Many of the new laptops will also feature Nvidia Max-Q technology, to enable ‘incredible performance in sleek, thin and light designs’. 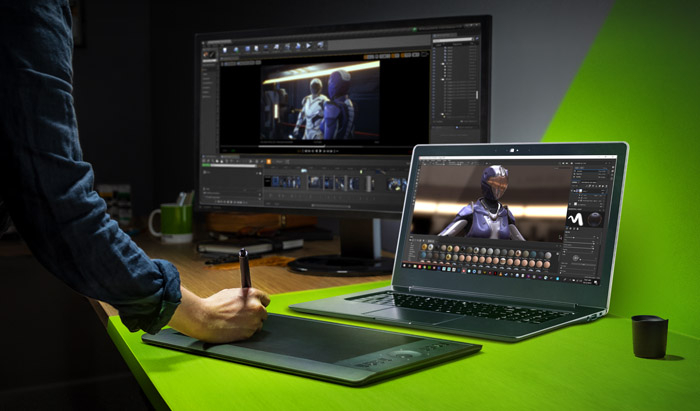