It’s been two years since the last release of Piranesi, the non-photorealistic rendering solution from Informatix. Since then the Cambridge-based developer has also released a Mac version and with Version 4 added support for 3D cutouts.

CAD is a fantastic tool. You can draught, model, and edit to your heart’s content. And with a suitable understanding of light, texture and perspective you can give your project an unparalleled sense of realism with photorealistic renderings. But CAD can also be a hindrance. It can stifle creativity, and discourage architects from investigating alternative concepts as they are forced to tie down their designs early on in the design process.

Of course the obvious antidote for this is the humble pencil and paper, and these two simple pieces of equipment remain useful weapons in an architect’s armoury. However, in recent years the CAD software developers have also been conscious of this apparent void in the architectural software sector and a range of conceptual design tools have been brought to market. 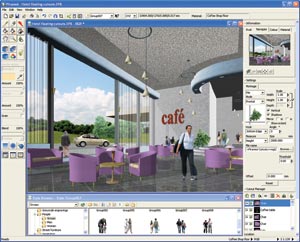 The new Tool Manager resides on the right hand side of the screen, and helps consolidate the number of dialogue boxes used in previous versions. 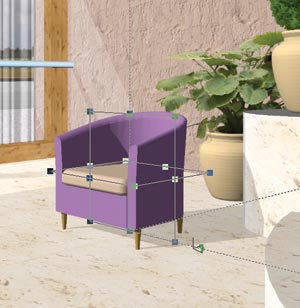 Users can now take 3D models in 3DS, SketchUp, MicroGDS, and DXF formats and place them in Piranesi scenes as 3D cutouts.

While products like SketchUp present architects with an easy to use modelling environment, Piranesi from Informatix Software helps bring these designs to life, enabling users to express design concepts simply and effectively with simple painting or rendering tools. So how does it do this?

Piranesi takes a 3D CAD model, and turns it into a raster image, onto which users can paint textures, colours or tints. You might think this sounds a lot like Adobe’s Photoshop, and in some ways it is. However, Piranesi differs from the industry-standard photo-editing package, insofar as each pixel in its dedicated Epix raster image format also stores depth and material data as well as colour.

The net result is that textures and colours can be applied to a scene by using a number of so-called intelligent rendering/painting tools. Users can restrict the application of a colour or texture to certain areas on the scene, locking plane, orientation, material or colour. As such it enables users to create a wide variety of masks at the click of a button.

Using a combination of colours, textures and blends, scenes can be rendered in a huge variety of styles from pencil sketches to watercolours, soft or hard edges. Colour can be applied in fills, washes, dabs, splatters, and scribbles, and filters can be used to blur, sharpen or smudge the overall image, a bit like Photoshop.

If textures are applied, Piranesi automatically deals with perspective. For example, if you paint with a brick texture, the bricks get smaller as they get further away, and the horizontal lines of brick courses converge towards the vanishing points of the scene.

As with traditional pen on paper rendering, it’s down to the individual to express their own style and while I’d say anyone could use Piranesi, you do need a fair amount of artistic flair to get the top results and time on your hands to learn how to make best use of the available tools.

Scenes can also be brought to life by adding ‘cutouts’, such as such as people, plants, trees, furniture, or cars. Piranesi comes with an extensive library of cutouts which are automatically scaled on the fly depending on where you place them in the scene, and because they are masked, will be hidden by any objects that appear in front of them.

It’s been two years since the last release, and while Informatix has undoubtedly been spending some of its valuable development resources on porting Piranesi to the Apple Mac, it’s also come up with some pretty cool new tools and features for Version 4.

If you’ve used Piranesi before, the first enhancement that jumps out at you is the new Tool Manager which resides on the right hand side of the screen, and helps consolidate the number of dialogue boxes used in previous versions. The Tool Manager incorporates three palettes which can be expanded and collapsed as required.

Another interface enhancement that is bound to appeal to those using Piranesi on a regular basis is keyboard shortcuts. Despite huge advances in GUIs over the years, I still believe you can’t beat the keyboard for speed of input.

The most impressive new feature is the ability to place 3D models into scenes. Building on its ability to work with 2D cutouts, Version 3 saw the introduction of support for RPC (Rich Photorealistic Content) from Archvision, a collection of 2D cutouts, which can be viewed from any angle (see www.archvision.com for more info). For Version 4, Informatix has taken this to a new level and opened up Piranesi to enable users to place true 3D content (in 3DS, SketchUp, MicroGDS, and DXF formats) into scenes as 3D cutouts.

Piranesi ships with a basic collection of 3D models, predominantly in 3DS format, which include basic furniture fixtures and fittings. However, it will come as no surprise to many that the Internet is also a huge repository for this type of content, many of which are available for free. www.e-interiors.net is a great resource for all types of furniture and fittings, and www.turbosquid.com for pretty much anything you can think of. You can of course knock up your own content in SketchUp, 3ds max, or MicroGDS.

As with their 2D counterparts, 3D cutouts are scaled automatically according to the depth at which they are inserted into the scene, and once inside can be rotated and scaled (or tweaked in Piranesi speak) with the use of handles.

Elsewhere, Piranesi is often used for indoor or night time scenes, and new illumination fades allow spot or strip lighting to be easily mimicked. Seven new filters have also been added and there’s a new bristle brush, where users can choose how many bristles the brush has. The brush and painter applicators also have new dynamic capabilities, which cause the painting effect to vary along the stroke.

In addition to a number of other subtle additions across the board, Piranesi 4 includes a much-improved tutorials section, which include some excellent videos, which I’m sure will be welcomed by new and existing users alike.

Piranesi continues to go from strength to strength and still manages to impress, release on release. The introduction of 3D cutouts looks like a major step forward and will provide architects and designers with virtually unlimited options when it comes to bringing their designs to life with furniture and fittings and the like. Usability has also been enhanced for Version 4 and you can’t underestimate the potential benefits that the new video tutorials may bring when introducing new rendering concepts.

Piranesi fills a unique role in the architectural market, and with such a wealth of rendering tools can mean many things to many people. It’s a fantastic tool for investigating different design concepts at the early stages of the design process, but can be equally adept at communicating finished designs. If you feel you’re inhibited by some of the more ‘mathematical’ rendering solutions on the market, Piranesi is definitely worth investigating, but don’t expect instant results. A combination of patience and artistic talent is needed to get the best out of the product, but with both a whole new world of non-photorealistic rendering awaits you.