This month’s Cambridge-based workshop and conference, held at the British Museum in London, demonstrated that the momentum behind the Smart Geometry group continues to grow.

According to the CAD software companies, industry analysts and even the press, CAD usage can be pretty much divided into 2D and 3D; you either use one, the other, or a bit of both. Despite what the CAD vendors would like everyone to think, most companies still rely heavily on 2D, because CAD software’s primary deployment has been that of a ‘drawing board replacement’. 3D usage is quickly growing in the Mechanical CAD space but in the construction industry 3D is still only found in the realms of specialist designer, perhaps within the practice of a ‘Signature Architect’, a structural analyst or a 3D visualisation expert.

When one thinks about 3D design, the natural assumption is that the 3D model would be a virtual model of the finished building, complete in detail but static. Just as 2D plans are the blueprint of a design’s plan, elevation and section. This view comes from the common understanding of ‘what CAD does for us’ and how it’s applied merely as a documentation tool.

There’s a growing number of AEC companies that use their CAD tools differently, and are researching new applications, processes and group working to use 3D in a different way. The challenge is to use the computer and the software to enhance the design part of the process, to easily produce/control complex geometry parametrically and provide a framework for design exploration. It’s not good enough to build a static 3D model as these have to be rebuilt if there are any changes. If we are to see the benefit of 3D, the models have to be able to change and adapt. The embodiment of this movement seems to be centred on the SmartGeometry group.

Initially recruited mainly from within London’s elite architecture and structural firms, the group is dedicated to educating the construction professions in the new skills which will be required to use these new 3D systems effectively. The SmartGeometry Group’s founding members include Lars Hesselgren (KPF), Hugh Whitehead (Foster and Partners), J Parrish (Arup Sport) and Dr. Robert Aish (Bentley). To a certain extent, it would be possible to construe that the group is mainly concerned with promoting Generative Components, a technology that Robert Aish, Bentley’s Director of Research, has built on Bentley’s MicroStation CAD platform, but it’s clear from the presentations given at their events that the platform isn’t the key issue, it’s the approach to using computers in an explorative design context that is the common link.

However, the key reason for the group’s existence is to offer a selection of AEC students access to Generative Components (which is still in development), and develop a programmatic solutions to design issues they are interested in. The ‘students’ can come from education institutions or from within practices. The SmartGeometry’s conferences offer a mix of thought-leader presentations, interspersed with demonstrations of what the students managed to achieve with Generative Components in the workshop sessions.

From successive SmartGeometry events it’s clear to see that the concept for more powerful design tools is growing in the community. As to what’s driving this interest, I talked with a number of attendees at February’s SmartGeometry event held at London’s British Museum. It seems there is growing interest in designing more complex forms, driven by practices like Foster and Partners with the Swiss Re building. The only way to do this is to use computer technology to assist in the design, test and manufacture. It’s a simple tale of competition driving the technology through the industry. If you want to compete you need to be at the leading edge. 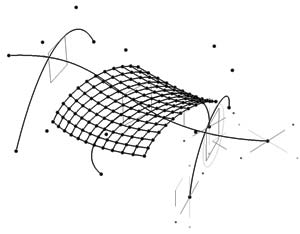 Practices told me they were establishing Research and Development teams to look at the technologies and their possible impact on their design capability. On this subject, I remember talking with Frank Ghery on his use of Dassault Systemes’ Catia to realise his designs. He quipped, “Using Catia I can make a wavey wall for the same price as a straight wall. So why make a straight wall?”

To produce affordable yet impressive designs in the today’s architectural vernacular (or tomorrow’s!), the traditional application of 2D and a static 3D model simply fail. New technology is needed and a fresh approach to using CAD within the design and manufacture process has to be found.

While many architects may not see the need to move to 3D, those that have, including those in attendance at the SmartGeometry sessions, seem ‘liberated’ in their attitude towards their use of forms. While the tools do require considerable technical knowledge to drive them, the ‘art’ and aesthetic element of architecture can come to the fore, with the computer handling the complexity and perhaps making the design viable by automating the pannelisation, or automatically calculating the optimum number of structural elements.

Aish explains, “With the advent of digitally controlled fabrication, the ‘geometrically aware’ and ‘computationally enabled’ designer is now as close to the materialisation as in the original craft process, but with precision and control and the ability to explore variation which was previously unimaginable.” 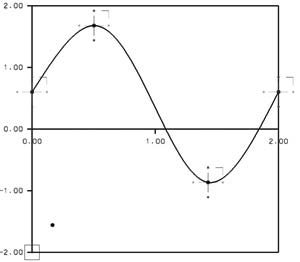 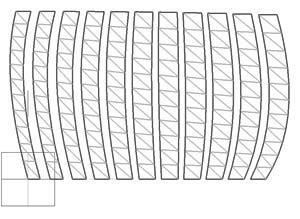 Generative Components is being used and evaluated by key industry players like Foster and Partners, Morphosis, KPF, Grimshaw, NBBJ and ONL, as well as a number of Schools of Architecture, including the Architectural Association, MIT, Georgia Tech. and the Technical University of Delft. The technology is about to go into beta and will be commercially available on MicroStation at some point in the future.

The system has been created on three themes: Geometry, Composition and Algorithmic thought. In terms of geometry, all the usual primitive elements are used-points, planes, coordinate systems, line arc, curves, surfaces and solids. Then there are geometric operations which are applied to the geometry, such as projection, intersection, union, difference and transformation. Using these operations, Generative Components can create simple and complex relationships between base geometry to allow modification, or configuration. Aish relates this to building a ‘control rig’, building geometry which may never be seen but may indirectly control the subsequent geometry created in the design process. Essentially the real time manipulation of these control points allows variation within the design.

In terms of composition, Aish explains, “It is pretty rare to find a building which is a realised as a single discrete object. Normally we are considering assemblies of components which, at intermediate levels of aggregation, form identifiable sub-systems. While these components may be pre-defined, or the subsystems may follow established industry conventions, there are increasing opportunities for each design to use mass customisation and digital fabrication to define project specific components. There is a tremendous advantage in using computational design tools which directly support the idea of ‘composition’ and which allow these strategies to be developed and tested.” 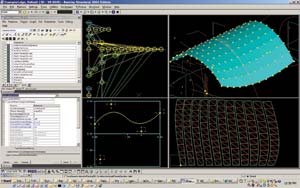 On algorithmic thought, this concept is based on the need for the system to be able to calculate, based on the intention of the designer. This could be calculating a fa?ade, automatically placing structural elements or applying a transformation equation to a surface. To do this the designer has to have explicit knowledge of how to drive the system. This is probably the most difficult hurdle to overcome with Generative Components, as the designer really needs to be part programmer and programming requires a logical approach to problem solving.

It appears that many of the firms that have used or evaluated Generative Components have opted to have a dedicated team to build these design rigs, based on the limits of the initial concepts. This allows the architects on the project to then interact with the rig, a live 3D model with embedded logic and quickly evaluate design alternatives. However, the team will only be able to operate on the control points that the original rig developing team deemed it necessary to create. Aish puts considerable emphasis on the time spent prior to building the rig, breaking down and anticipating the level of variation required further down the line. “We have to match our tools to the concepts around which designers want to build their skills,” added Aish. “Our expectation is that geometric skills, compositional skills and algorithmic skills will be the key to future design.”

To put that into layman’s terms, Generative Components is a layer on top of MicroStation which provides a programmatic and visual way of building control geometry which can be used to interactively control a model. This isn’t the ‘walls, doors and windows’ ‘intelligence’ of products like Architectural Desktop, which is essentially about quickly generating 2D general assemblies. Generative Components works at a much lower level and isn’t bothered about the interaction of pre-defined recognisable building components. It simply concerns itself with geometry, complex relationships, control and applying complex, user-defined computations to a design.

In the next instalment I’ll look at the presentations given at the February SmartGeometry event. The keynote was given by Chuck Hoberman, a talented artist and inventor whose designs for morphing and transformable objects has won him world acclaim. Hoberman has created everything from toys, furniture and art installations to military designs for tents and quickly deployable blast walls.

Also of note, Spencer de Grey, partner at Foster and Partners wrapped up the event with a presentation on the British Museum Great Court and Smithsonian roof projects, which he oversaw. Fosters use of expressive forms has, in part, helped drive this movement and was a fitting end to the proceedings. At the after conference drinks, we all stood underneath the undulating roof, as a practical reminder to all those who had attended.