With its stripped-back interface, new emphasis on data management and the introduction of a live link to Rhino+Grasshopper, ArchiCAD 20 looks set to open new doors for the software company, writes Randall S. Newton

Back in the 1980s, Graphisoft was the first company to put a 3D architectural modeller on a personal computer, the thennew Apple Macintosh. Today, it’s a BIM thought leader even if, globally, it’s not the top seller of architectural software. That leadership continues in ArchiCAD 20, with several key enhancements introduced with a view to extending the product’s value.

According to the company’s marketing slogans for this release, ArchiCAD 20 offers “a fresh look at BIM” and will “put the I in BIM” for customers. We’ll get to that second claim later, but that ‘fresh look’ will be obvious to the experienced ArchiCAD user the moment version 20 boots. The user interface has been completely redesigned to be, in the words of Graphisoft’s Tibor Szolnoki, “modern, minimalist, fresh and friendly.”

Its interface designers have stripped the screen down into three elements: background, icons and text. “The old interface had too many buttons of varying size and emphasis,” Szolnoki explains. That led to what designers refer to as ‘interface noise’, but borrowing from best practices for mobile apps, ArchiCAD 20’s rebuilt interface is more comfortable and less cluttered. In the past, it presented users with two line thicknesses, three line types and three colours. By contrast, ArchiCAD 20 now gives them thin lines, uniform button sizes and only the most commonly used commands appear by default. At the same time, there are 7,000 all-new command icons, with another 13,000 library icons to be updated on an ongoing basis.

The ‘eye candy’ side of architecture has not been forgotten. ArchiCAD 20 runs the latest version of CineRender, based on Cinema 4D. Changes include improved surfaces, reduced render times and more realistic contact shadows. A new reflectance channel allows multiple reflection layers and fine-tuning control over blurriness and distance dim.

A new emphasis on data management explains why Graphisoft executives are claiming that ArchiCAD 20 “puts the I in BIM”. Much of the new technology in this version comes with an enhanced approach to importing, managing and displaying the diverse forms of metadata associated with any architectural model.

That’s important, because information relating to item cost, manufacturing details, building code compliance, fire ratings and hundreds of other issues typically comes from multiple sources. Little of this data is generated by the architectural team itself; most comes from third parties who are not BIM users. In addition, much of the data arrives in Microsoft Excel spreadsheets, although more manufacturers are adopting the IFC open standards for architectural information.

“We had too many ways to work with metadata prior to Version 20,” says Szolnoki. IFC was one of many sources of information and the various information formats were not well connected.

Version 20, by contrast, leaves behind the tags and categories, files and folders approach to storing and using metadata. Architects were afraid of this complexity and left it to BIM managers. Much information was only found attached to library models or imported from add-ins when needed.

Most metadata arrives without a readymade visual footprint, so ArchiCAD offers one or allows the user to create it. Using fire rating as an example, ArchiCAD automatically provides visual cues to see whether a wall has a 30-minute, 60-minute, or 90-minute rating. The designer can quickly create a view that presents fire rating.

Much of the metadata that architects work with is from manufactured elements, with doors being the most common example. Every door manufacturer provides data, but using it creates a broken workflow. The data arrives in an Excel spreadsheet and must be placed into the BIM model. There’s no two-way information exchange between BIM model and Excel file. The designers who use this information often limit their door choices to a few beloved options, to minimise the tedium of metadata use.

ArchiCAD 20 directly imports this data into ArchiCAD Elements for storage and use. The data is automatically populated into schedules and to the BIM model. Unique ID numbers are attached to incoming metadata, allowing a twoway path to be created between spreadsheet and BIM. ArchiCAD 20 users may also create a new spreadsheet from data that was created in the BIM model. 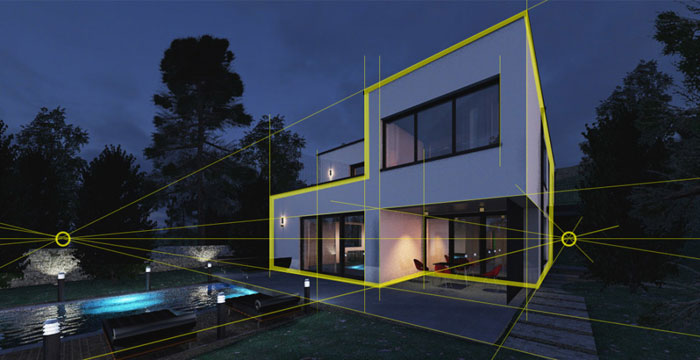 Two-point perspective from a 3D view 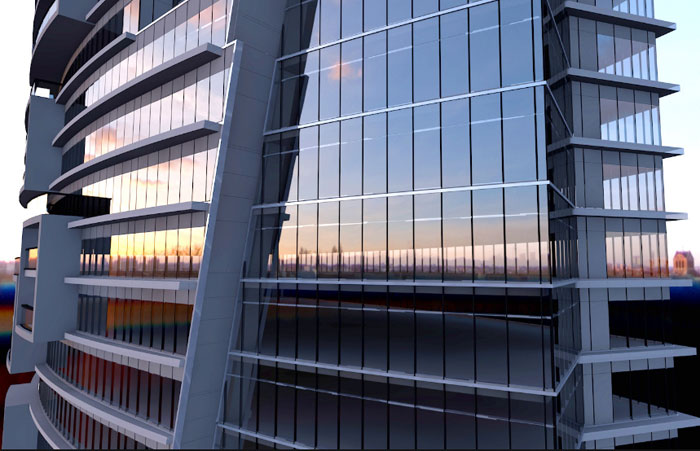 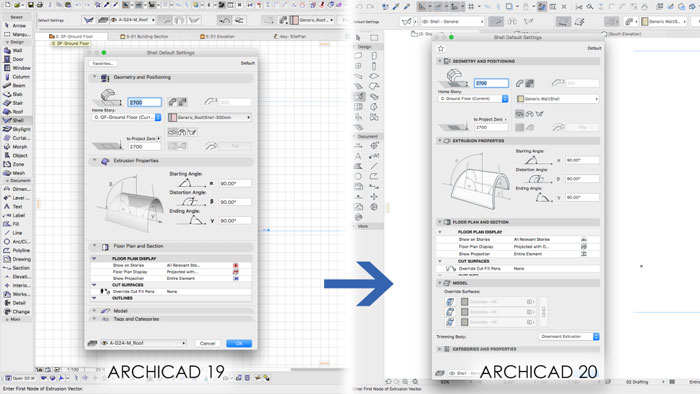 Architects don’t want to be data managers. They want to design – and they want the process to be like having a Lego kit, with all the information already attached to the modelled element. To improve the process, Graphisoft has reworked Favourites, a tool it says has been under utilised in previous ArchiCAD versions, especially among small firms. It was seen by many as hard to use and not graphic. ArchiCAD 19 had a workaround – the option to pick parameters from another object – but it was easy to misuse the process.

ArchiCAD 20 offers a new twist, Geometric Favorites. This works as a palette, offering thumbnail views instead of names as in previous versions. Shift-hover changes the view, on the fly, between 2D and 3D. Graphisoft says the new Favorites Palette is better equipped for helping designers manage data. Pop-ups put Favourite options at the mouse point. When a designer’s favourites add up to hundreds, the Edit Favorites command can rearrange which ones should appear first. To organise these easily, there is a tree structure and a folder structure. Users can search by properties, as well as by item names. The company claims this new approach to using library elements is how the average architect will use information management inside ArchiCAD.

A related feature is Graphic Override, a new tool based on the Renovations tool in previous versions. In past versions, it would overwrite data based on renovation status. Now, the command is used to update and display metadata. It will overwrite visuals and overwrite criteria. In a demo, Graphic Override instantly painted all 60-minute fire-resistant walls to orange; the view can be switched on and off as needed. Such views are available for both 2D and 3D.

ArchiCAD 20 can accommodate and maintain IFC workflows, but also offers more advanced and more flexible model and visualisation functions. Getting all load-bearing walls to change their appearance, for example, is quick work. FM View can instantly colour rooms by function; Lease View can highlight a tenant view of a floor plan. Graphic Override also offers ‘cardboard’ and white views for early sharing of models with a client, when it is easy to get lost in the details. 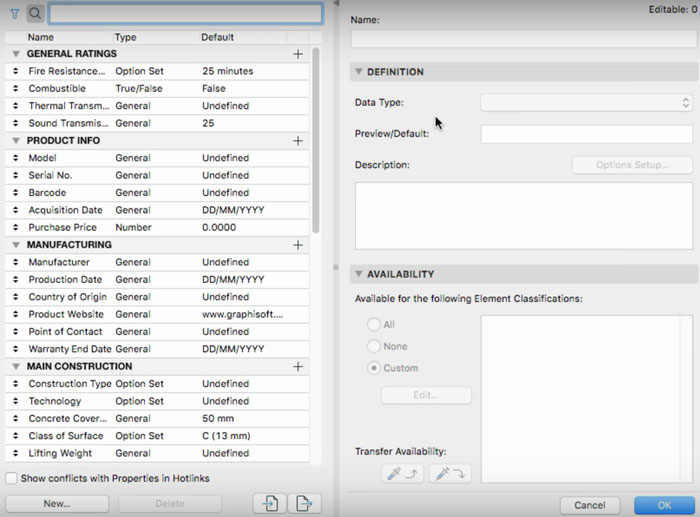 Algorithmic design for initial concept has become the hot new technology in architecture. Originally known as ‘generative design’ and first brought to market by Bentley Systems, it has been adopted by many signature architecture firms as a fast way to get to hig

h-quality ‘blobby’ architecture in a short time. Algorithmic design allows pre-selecting geometric elements that act as parametric constraints. With those set, it becomes possible to explore unlimited options rapidly. The most popular product for this today is the combination of the 3D modeller Rhino from McNeel and Associates and its Grasshopper add-on that specialises in algorithmic design. This is seen as a bestof- breed solution and is used around the world as an initial design tool in architecture. The standard workflow here has been to conduct initial concept development in Rhino+Grasshopper and then send the results to the BIM team, which creates the schematics and construction details. It is a silo approach to design, with no live connection between products.

Working closely with McNeel and with international architectural studio BIG (click here for more details), ArchiCAD has developed a two-way live link to connect Rhino+Grasshopper and ArchiCAD 20. The link solves the major challenge in using Rhino with an architectural modeller: 3D data formats.

The ArchiCAD team makes much of its GHAC Logic — or, in other words, Grasshopper/ArchiCAD Logic. This integrates the Grasshopper visual scripting interface into the ArchiCAD workflow. The logic of Grasshopper is to define or assign a geometric parameter with vectors to algorithmically define and control design. Graphisoft executives know that customers will come up with their own use cases, but primarily see the GHAC Logic as suitable for three workflows:

1. Starting in Rhino+Grasshopper to design and then extending the data to ArchiCAD 20 for BIM.

2. Complementing ArchiCAD with algorithmic functions, using simple 2D as reference, for control of geometry and to control attribute values.

3. Starting with a ‘geometric container’ and then setting and controlling geometry from within ArchiCAD 20, to include attribute values and GDL parameters and take advantage of new libraries in ArchiCAD 20. “It is a very powerful tool,” says product manager Erik Havadi. 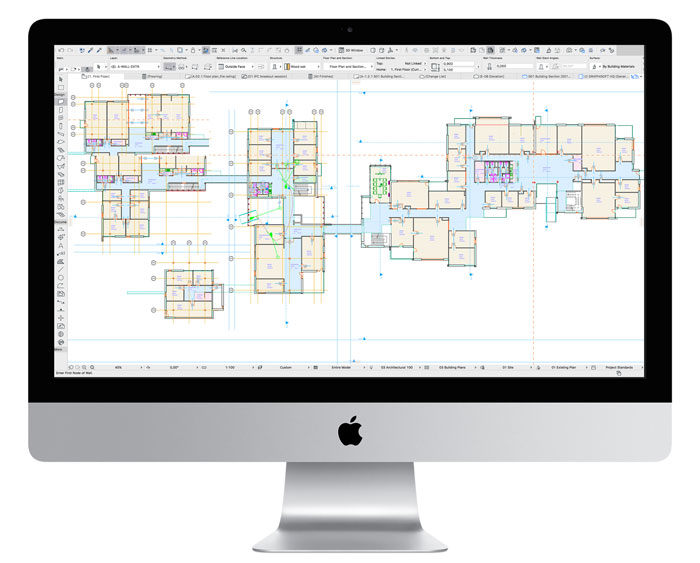 Makers of best-of-breed software are not usually market leaders, but do tend to be the pioneers of new tech. ArchiCAD is considered a best-of-breed BIM modeller, but it takes the middle ground in this release, combining the best of internal improvements with a key technology alliance in the spirit of ‘if you can’t beat them, join them.’ The live link to Rhino+Grasshopper, in particular, is a game-changer that will open doors for Graphisoft.

Randall S. Newton is a business analyst and journalist with more than 30 years experience in the AEC and manufacturing design industries.