This Small Form Factor (SFF) workstation may be bulkier than many rivals, but its ability to host a high-end graphics card makes it stand out from the crowd

Small Form Factor (SFF) workstations are big business these days. Why have a colossal tower on your desk when you can get everything you need in a cleverly engineered, compact chassis?

SFF machines from the likes of Dell, Fujitsu, HP and Lenovo pretty much follow the same formula: quad core CPU, entry-level to mid-range GPU, up to 64GB of RAM and a handful of storage drives.

But what if you need a bit more ‘oomph’ from your desktop and don’t want an imposing tower to take over your desk? Well, in that case, Bolton-based Scan might have something for you.

Scan’s new 3XS GW-HS10 is probably best described as a low-rise tower. The 250mm x 374mm footprint of its Fractal Design Node 304 chassis is similar to that of a standard desktop workstat i o n , but standing 210mm high, it’s significantly shorter.

This squat form factor is in contrast to most SFF workstations, which are slimline by design and can only take a special sub-50W, low-profile graphics card, putting a cap on 3D performance.

The 3XS GW-HS has no such restriction and has 3D graphics potential to rival most towers. Indeed, with its spacious interior and powerful 600W Corsair CX600 PSU, it can even take a high-end, double-height graphics card like the AMD FirePro W8100 or Nvidia Quadro M5000.

With this in mind, our test machine’s mid-range AMD FirePro W4300 GPU doesn’t really do the mini workstation justice. In fact, as this low profile GPU was primarily designed for slimline workstations like the HP Z240 SFF, speccing it for 3XS GW-HS doesn’t really make sense.

For £30 less, you could bag yourself a full-height AMD FirePro W5100 and not only save money but also boost 3D performance. In some CAD software, this could be by as much as 10%.

As with most of Scan’s desktop workstations, the 3XS GW-HS features an overclocked quad core CPU – the ever-popular Intel Core i7 6700K. However, due to its compact chassis and more challenging thermals, Scan only gives you 4.2GHz and not the full 4.4GHz, which is typical of Scan’s tower workstations. The CPU is matched with 16GB of Corsair Vengeance LPX DDR4 memory running at 3,000MHz.

Overall, we found the machine’s acoustics to be very good. The CPU is liquid cooled with a Corsair H80 hydrocooler, while two 92mm fans at the front and one 140mm fan at the rear help keep air running through the machine, to stop the internal components overheating.

For day-to-day 3D CAD work we only noticed a gentle hum from the fans. It was only when we started hammering both CPU and GPU concurrently with a highly impractical barrage of rendering and graphics tests that the volume went up a notch – but, even then, noise levels were still perfectly acceptable. Of course, this could change with a more powerful 150W to 200W GPU. The AMD FirePro W4300 is only rated at 50W.

For a machine of this size, it has great storage potential. Our test unit came with the classic CAD combination of a 256GB Samsung 850 Pro SSD and 2TB Seagate HDD, still leaving space inside for two more 2.5- inch or 3.5-inch drives. In addition, with an M.2 slot on the rear of the motherboard, you could in theory add a high-performance NVMe SSD, such as the Samsung SSD 950 Pro.

With such a big focus on storage and graphics, there are some compromises. The mini ITX Asus Z170I Pro motherboard only has two DDR4 RAM slots, so memory is limited to 32GB, half that of a typical ‘Skylake’ SFF workstation.

With the only PCIe slot taken up with the GPU, you can’t have any additional add-in boards, such as USB Type-C, which is notably absent among the ten USB Type-A ports on the rear and side of the machine (two of which are USB 3.1). 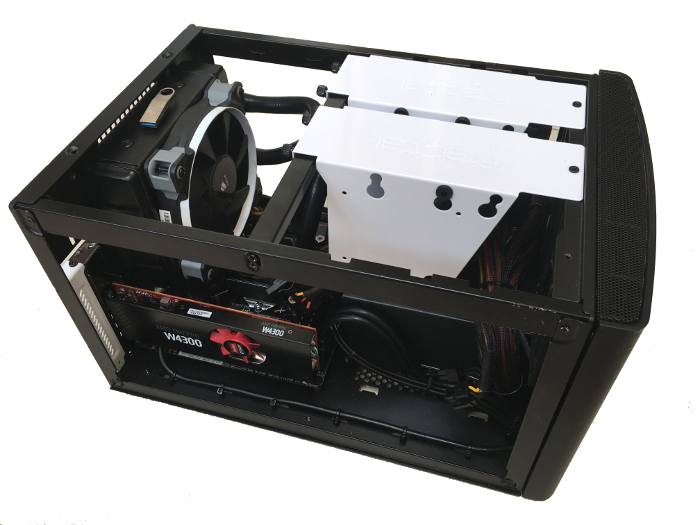 With the potential it has for high-end graphics and multiple drives the Scan 3XS GW-HS offers an interesting alternative to most SFF workstations.

It should appeal in particular to designers who need more 3D performance for high-end CAD, design viz or GPU rendering, though only having a maximum of 32GB RAM could be a barrier.

Taken as a mainstream CAD machine as reviewed here, the benefits over a traditional SFF workstation are less obvious. Yes, you get a decent boost from the overclocked CPU, but the squat chassis lacks the elegance of a slender SFF machine.

In saying that, even though the footprint is still significant, it certainly makes you feel less ‘penned in’ at your desk than a traditional tower. Added to that, compared to a standard tower, it’s relatively portable, making it an interesting option for those who need to take CAD on the go.