Generative design is an application of parametric modelling technology that has quickly swept through the design schools and high-end architectural firms, and is now on the cusp of going mainstream. Martyn Day attended the key annual conference, SmartGeometry 09.

Signature architectural practices, such as Frank Gehry and Foster + Partners, have been using 3D modelling and innovative programming to create beautifully sculpted forms for a number of years to advance the vocabulary of architectural design. However, while momentum for advanced modelling is gaining pace, the skill-set of some graduates continues to lag behind in geometric knowledge.

A rendering of the Generative Components steel beam array.

To rectify this, and to skill the next generation of digital designers, a handful of industry luminaries set up the SmartGeometry group in 2001. The group represented a partnership between practice, research and academia and included High Whitehead of Foster + Partners, Lars Hesselgren of KPF, Jay Parish of Arup Sports, and Dr Robert Aish the then chief scientist at Bentley Systems. Affiliated education institutions included the Architectural Association School of Architecture (AA), MIT, Delft Technical University and the University of Bath. The SmartGeomtery group organised workshops and seminars to educate the industry on the benefits of parametric design, scripting and digital manufacturing.

Eight years on and to say things are going well would be a huge understatement. Parametric modelling and an explosion in interesting architectural sculpted forms is literally revolutionising our city landscapes. Many of the architectural lecturers I know have difficulty finding words to describe the complex designs that their students produce — some aren’t even sure if it is ‘Architecture’. The days where 2D CAD was used to merely document a design for construction are gone. With an increasing number of options, from SketchUp to Bentley Generative Components, architects are finding ways of exploring 3D in highly complex ways.

This year’s SmartGeometry event was held in downtown San Francisco and followed the now familiar format of workshop, alumni day and a conference day. Bentley Systems is the key sponsor of the event and so the workshops teach Bentley Generative Components technology, based on MicroStation, to a mix of both university students and designers from practicing firms. While students may let their imaginations run riot, those with jobs frequently try to use the training on offer to apply GC to an existing project or problem. This year there was the addition of a rapid fabrication room, where a number of Z Corporation rapid prototyping machines were available to produce physical copies of the generated designs. 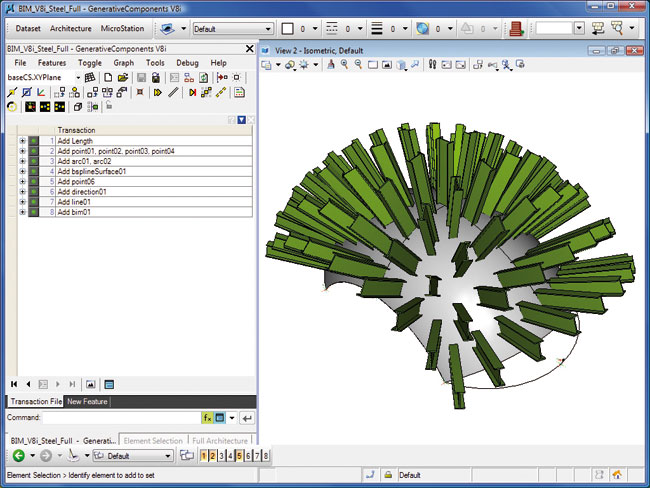 A model in Generative Components arraying steel beams over a surface.

New kids on the block

Generative Components is without any doubt the leading parametric system in architectural practices today. This is in part due to its MicroStation base and the length of time it was in extended beta, with Dr Robert Aish engaging with practices and architectural schools that wanted to participate. However it is clear that GC is no longer the only game in town, with McNeel Associates’ Rhino-based Grasshopper technology gaining popularity, together with architects using any number of other modelling tools to explore paramatrics, such as SolidWorks, Catia and SolidThinking — to name but a few. A year ago Dr Aish left Bentley Systems and joined its arch rival Autodesk to develop parametric modelling tools for architects and designers in AutoCAD. So the competition is heating up for expressive modelling tools and this is a great indicator as to the level of interest in this market.

Just prior to the first Alumi day, I met with a San Franciscan friend who introduced me to a local architect, Andre Caradec, who also lectures at the California College of the Arts. Mr Caradec invited me to the FLUX workshop and exhibition that was running at the same time as SmartGeometry. There were some overtones that FLUX was a response to competitive vendors which couldn’t take part in SmartGeometry due to Bentley’s long-term sponsorship.

Indeed, the companies highlighted at FLUX were McNeel, Autodesk and SolidThinking. Both events were about the same thing: educating students to use the 3D tools to create complex designs, and exploring modular assemblies, meshes, material systems and environments. At the exhibition many of the SmartGeometry hierarchy were present to wonder at the models on display.

The main display was a massive, internally lit, twisted sculpted form designed in 3ds Max, Rhino and Grasshopper. Mr Caradec had fabricated much of it in his garage with CNC machines and it is the largest Grasshopper project to date to be manufactured.

This was the second SmartGeometry since Dr Aish left to join Autodesk. While Bentley sponsors the event the content of the key presentations is independent. Attendees hear about projects that have been completed in all manner of CAD applications. It is not about what software was used, but the application of technology to solve design problems. 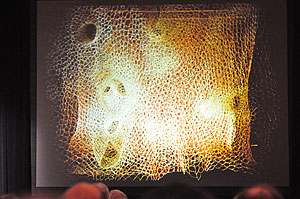 That said, GC was always to the fore and the new man in charge of the product, Makai Smith, was on-hand to update and explain the development work that Bentley had been putting into the latest versions. There was even a team of developers at the event to add to GC’s capabilities should it be required in the workshop sessions.

During the two-day event attendees heard from the visiting lecturers and viewed the students’ work produced during the training class and four-day hands-on workshops. Every year the designs just get better and more complex, with everything from adaptive shading designs to the generation of internal spaces in tower blocks, derived from the movement of termites (termite mounds are, apparently, inherently good examples of self-regulating systems).

The overriding feeling I was left with from SmartGeometry 09 was that of convergence. Architects now can help and learn from medicine, aeroplane designers and mechanical engineers, to name just a few. The move to modelling presents us all with the same challenges and benefits.

With the concentration of presentations being about green issues and limiting carbon emissions, it is obvious that all things that humans design have a price to the environment — should that be a car, a plane or a building. With buildings estimated to produce 50% of the world’s carbon emissions it is down to each industry to innovate and find solutions and to share these findings. GC used to be the only event that showcased exciting applications of computer technology, but this is increasingly no longer the case. With ‘Rules Based Design Symposium’ in Berlin, FLUX and a number of other events springing up the appetite for parametric design is no longer only for the signature architects.

While there is much to learn and the systems are still complex we are witnessing a change in the way we use computers and collaborate to solve design problems. Using a quad core, 64-bit workstation to draw flat lines is like using a sledgehammer to crack a wallnut. With products like Generative Components and an emerging new class of applications, the sledgehammer can build green cities. 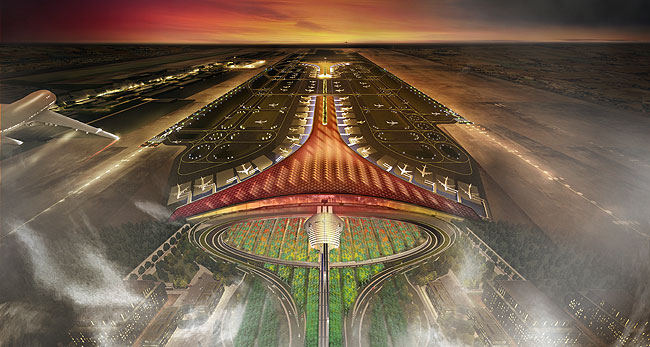 SmartGeometry 09 showcased no less than 40 presentations. There was a lot to take in and much of what is shown is either research or explanations of completed projects. Here, Martyn Day highlights some of the more exciting projects.

• Jenny Sabin of Sabin+Jones Lab Studio gave for me the most fascinating presentation. While being an architect and teaching architecture, Sabin and her students had been working with the University of Pennsylvania medical research laboratory. The process is one of mutual benefit, with Sabin helping to explain and model medical structures at a cellular level for the medical team, while she gets insight into nature’s solutions for building structures and behaviour. One of her projects involved the modelling of ‘forces between vascular cells’ using 75,000 cable zip ties. The utterly stunning model is so large you can walk around and inside it.

• James McBride of Mankani Power gave an astounding analysis of an individual’s power consumption. Mankani Power is developing a kite-based wind turbine, which is currently being tested on the cliffs of Hawaii and is trying to play a part in the developing green energy industry. CEO Saul Griffith chronicled all the energy he has consumed in a year — and it wasn’t a pretty picture. The basic problem is that people in the West have high power consumption, while in the East there are massive populations on relatively low power consumption. As the East’s need for power grows the exponential requirement for energy will outstrip our ability to produce and we can’t burn any more coal. 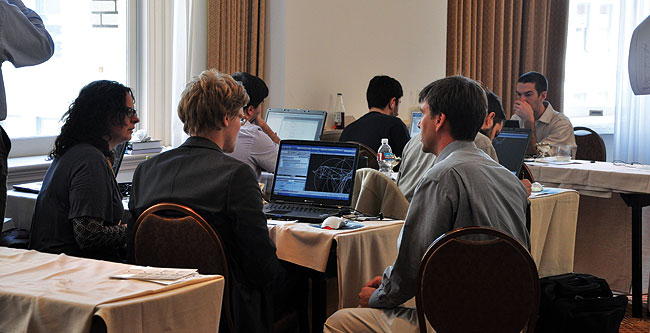 Students undergoing a Generative Components workshop at the SmartGeometry event.

• Marty Doscher of the innovative and multi-award winning practice, Morphosis, gave an insight into how computer tools have liberated the creativity of its designers, enabling highly complex and original designs. The projects really speak for themselves. The interesting post note was the culture of the firm where some architects that went on site to work with the contracts sometimes “didn’t make it back”. This wasn’t because they were hugely error prone, but because it was deemed a drawback to enhance their knowledge of how things were made. By thinking about limitations of construction in the design process, they felt that the design was compromised. Certainly a presentation for purists!

• Steve Downing of Arup and Dominik Holzer of AEC Connect introduced the concept of ‘Optioneering’, which is a programmatic way to look at all the options and trade-offs between multiple criteria in complex projects. With projects becoming more collaborative, if used early on, performance criteria can be weighted, driving analysis of all the designs done by various disciplines on the project, giving rise to the best design. This is being tested by Arup having developed a collaborative framework that connects all the digital project information from modelling products to analysis tools.

• David Kasik of Boeing was an unusual presenter, introducing himself to the architectural audience as from a company that makes ‘flying buildings’. He took us through the many permutations that Boeing has made to visualise the massive amounts of data that it created in the forthcoming 757 aeroplane. With literally millions of polygons, shortcuts have to be made and every trick in the book used to fly through the model in real time.

• Hugh Whitehead from Foster + Partners always wins the day for the quality of projects and beautifully rendered images. His topic this year was collaborative visions and their interpretation. Using the stunning Beijing Terminal 3 building as an example, he gave a walk through of the design, highlighting engineering features and architectural details. While Heathrow Terminal 5 took 20 years to plan and build, this gargantuan Terminal (the largest in the world) was completed in under five years. This was made possible by using the software to calculate and generate the parametric elements.