Epic Games has made a major commitment to the design viz sector with the launch of the open beta of Unreal Studio for Unreal Engine. The new subscription offering, which is free until November 1, 2018, is designed to make it much easier for users in the architecture, design and manufacturing industries to create high-quality, real-time, fully immersive [VR] visual experiences using the popular game engine.

Marc Petit, general manager of Unreal Enterprise at Epic Games, also told AEC Magazine of future plans to add direct support for SketchUp, thanks to a collaboration with Trimble, the developer of the architectural-focused, push/pull modelling tool. 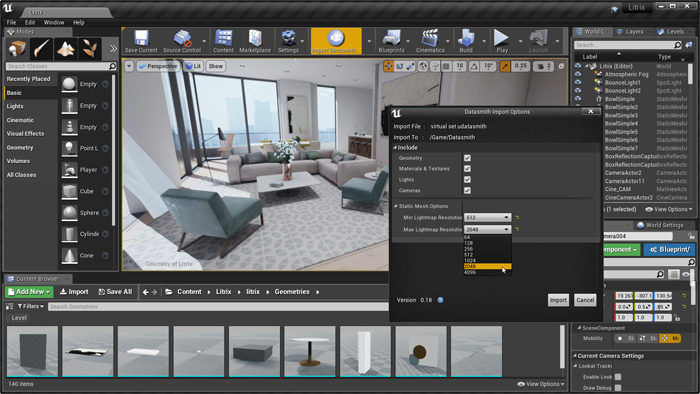 Import complete scenes: as above with Import Dialog open

There are four key components to Unreal Studio – new learning tools, professional support, assets (including templates and materials) and the Datasmith workflow toolkit, which is designed to streamline the transfer of CAD and 3ds Max data into Unreal Engine.

“Datasmith simplifies bringing Unreal Engine into architecture and design pipelines with automatic lightmap and UV creation along with scripted workflows to organise, optimise and clean up geometry,” said Petit. “The feedback has been overwhelming—in just five months we had over 14,000 beta registrations, and a recent beta survey reported Datasmith productivity gains of 113 percent. We’re taking all the ‘boring’ work out of the process and giving users more time to be creative.” 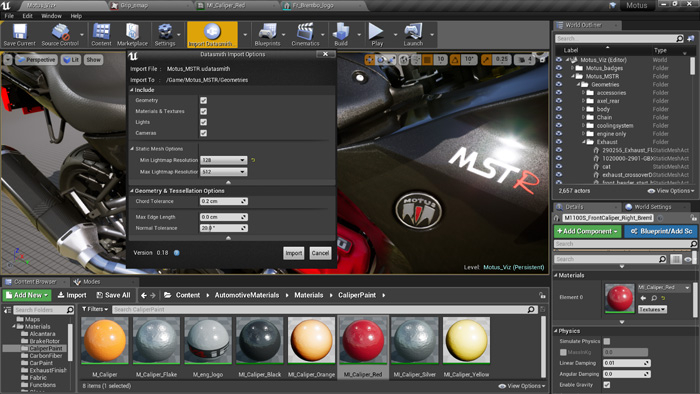 In addition to Datasmith, Unreal Studio features a range of tutorials, including Unreal Engine fundamentals and several industry-focused training materials.

There will be an extensive library of assets, including 100 Substances from Allegorithmic for common architecture and design materials, and industry-specific fully customizable templates to help user quickly create ‘experiences’. Petit told AEC Magazine that the initial templates will focus on navigation and manipulation, but there are a lot of other things coming in the future many of which can be ‘borrowed’ from the games guys such as VOIP, mark up and touch up.

Petit added that collaboration tools are also in the pipeline. “A lot of people don’t realise it [multi-player] is in the engine,” he said. “We can handle 3.4 million concurrent users [in games]. We should be able to handle a design team!”

Unreal Studio will also have a big focus on support. The beta features both a monitored community-driven discussion board and one-to-one ticketed support.

The viz focused offering will be available in free open beta until November 1, 2018. After that date, it will be $49 per license per month. 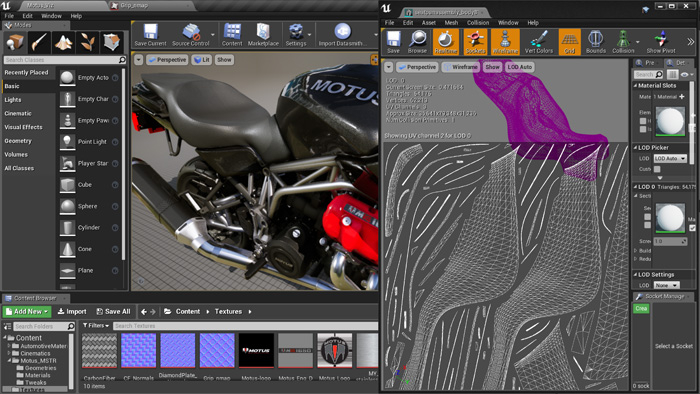 Automatic UV generation: when texture UVs are missing, they will be automatically generated

AEC Magazine has learned of a collaboration between Trimble and Epic Games that will soon mean Unreal Engine will be much more tightly linked to the popular push / pull modelling tool SketchUp.

Petit was not forthcoming with many details but the streamlined interoperability with SketchUp looks to be about giving architects a route into VR much earlier on in the design process – to support exploratory workflows through conceptual design or massing models, for example.

As the conceptual design process is so fluent, AEC Magazine wonders if Epic Games might take a similar ‘live link’ approach with SketchUp, as it has done with Maya. In theory, this could mean an architect is able to explore new ideas in SketchUp, then put on a headset and instantly visualise the model in VR, much like the workflow that German software developer Enscape currently offers with its Revit plug-in.

SketchUp integration appears to be part of a wider strategy by Epic Games to make Unreal Engine much more accessible to architects and engineers and not just limiting it to design viz artists. “Our first target with the free open beta is clearly for specialists,” said Petit. “The specialists want it now, but we’re not going to stop there. By November, our objective is to make a tool that is for everybody.”

Revit and ArchiCAD users can already get easy access to Unreal Engine through Twinmotion 2018.

The easy to use software, which is powered by Unreal Engine through an OEM agreement with Epic Games, offers “1-click sync” with ArchiCAD and Revit. It means any changes made to the BIM model can be updated in Twinmotion with a single click. ‘1-click’ also applies to entering VR, to experience designs using HMDs like the HTC Vive, as well as adding materials, vegetation and people to the scene. 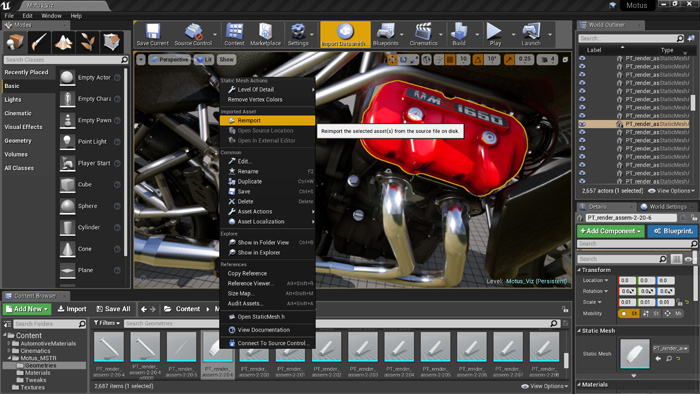 Reimport workflow: after importing into Unreal, objects can be re-import with different settings

A recent independent rendering survey by CGarchitect of over 2,000 visualization professionals revealed that 20% are now using Unreal Engine 4 in production, which is twice the percentage that were using it one year ago. Petit is keen to point out that this makes Unreal Engine the number one real-time solution used in architectural visualization and the fourth most popular renderer overall – only behind Corona, V-Ray and V-Ray RT which are used for static renders and animations.

“The reason they want to do CG in real time is because it’s fast and efficient and cheap – no render farms,” said Petit. “Because it involves interactivity and we know interactivity is engagement – and on top of it you get immersivity, you get VR and AR and all those things. 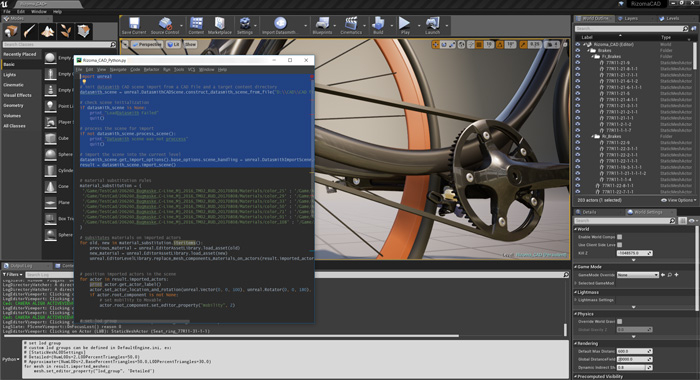 Organise, optimise and clean up geometry with scripted workflows

Petit added that the sacrifice in visual fidelity is not that high any more. “We’ve kind of reached the threshold of believability, where you get so much more value by being interactive and immersive,” he said. “You get a better cognitive experience, you fool the brain better by having performance and frame rate and immersivity and interactivity than by having ‘perfect’ glass or ‘perfect’ reflections.”

Austin Reed, 3D visualization team lead, HNTB Corporation, one of the many AEC firms that participated in the Datasmith beta program, agrees. “Datasmith has given HNTB the ability to quickly iterate through design changes and visualise them from every angle in real time at the same quality level expected from our traditional Vray renders,” he said. “This allows us to make sure we can deliver exactly what the client has envisioned and allows us to save days of rendering time.” 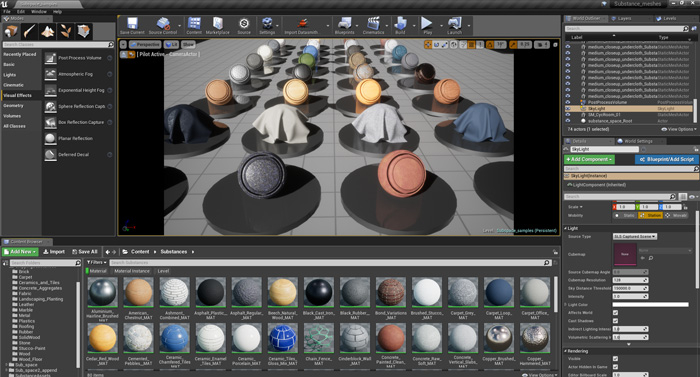 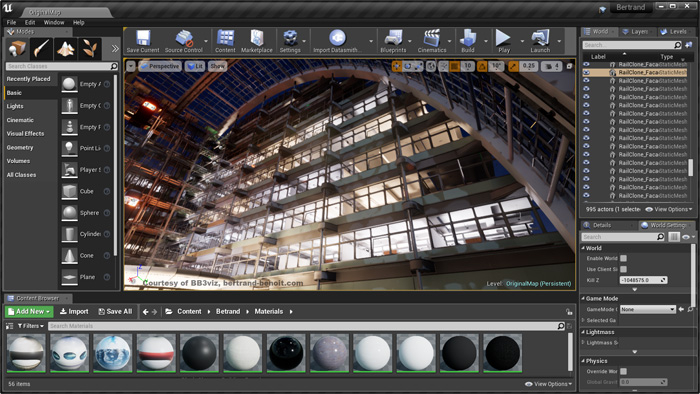