As part of its yearly BE event, Bentley holds a full day of seminars demonstrating how computer aided design and manufacturing technology is being used by the more adventurous practices and students. Martyn Day reports.

IÝve lost count as to how many of these events I have now attended but I have to say itÝs the highlight of the architectural calendar, as far as design technology presentations are concerned. While the projects on display will blow you away, itÝs not so much the end product thatÝs the focus, but how the design was achieved. Refreshingly, while this is at a Bentley event, those taking the podium were not always Bentley customers.

The seminars have been the brainchild of BentleyÝs Director of Research, Dr. Robert Aish and they have provided a platform to demonstrate his Generative Component (GC) technology which has been in development at Bentley for a number of years. Some of the willing early Ùguinea pigsÝ also get to describe their experiences with the technology and these usually include industry luminaries from Foster and Partners, KPF, NBBJ, Arups and many others. Over the years the list of these interested parties has mushroomed, with this particular event now demonstrating the industryÝs enthusiasm for exploring new ways to use computers to assist in defining complex design. 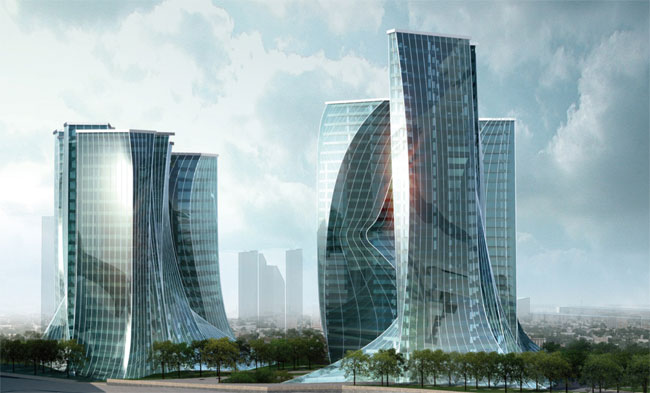 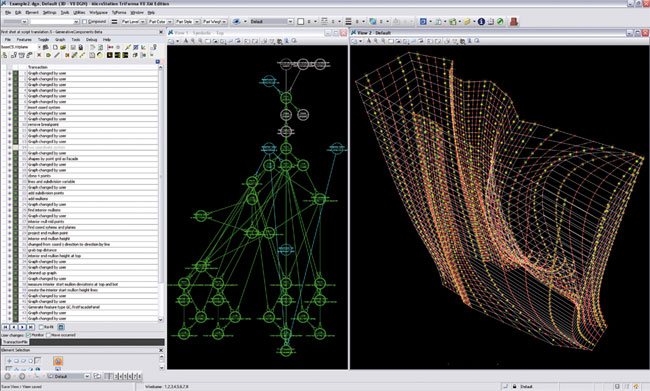 The new ethos and demand from these practices is that CAD as a documentation tool is not good enough. And while the AEC market has been slow to adopt 3D, even these commonly available tools have been found to be lacking by the architectural early adopters. The main problem is that the current 3D tools are there to document the design in 3D and to ease the production of 2D drawings, not to enhance or optimise the model. If changes need to be made to the design, then it has to be, at best, partially rebuilt.

Traditional 3D models do not include userfeedback, interactivity, automatic generation or variational design. Generative Components is a programmatic environment, based on top of MicroStation, which allows designers to build simple parametric skeletons, derived from standard MicroStation geometry, to produce designs and forms that can automatically generate or update, depending on the input to this underlying ÙframeÝ geometry. This isnÝt the Ùwalls, doors and windowsÝ ÙintelligenceÝ of products like Architectural Desktop, which is essentially about quickly generating 2D general assemblies from a 3D model. Generative Components works at a much lower level and isnÝt bothered about the interaction of pre-defined recognisable building components. It simply concerns itself with geometry, complex relationships, control and applying complex, user-defined computations to a design.

I have to admit itÝs not a technology for the faint hearted, as the learning curve requires some level of programming methodology together with an understanding of basic principles of geometry and a problem solving mind. It seems that most that have taken to using the tool are either young, ambitious and smart computer-literate architects or rocket scientists ± both of which seem in plentiful supply in leading London architectural practices.

If you look at the projects that have really dictated the current leading edge architectural vocabulary, from the likes of Foster, Liebskind, Gehry and Zaha Hadid, itÝs obvious to see that the ability to model complex surfaces and move this to digital fabrication are essential in their processes. This can only be achieved with increasing reliance on CAD systems and is a key reason why Generative Components, even while in extended Beta test, has already been used in the design of some very large projects. As I write this, Bentley has in fact, just announced that the first official version of Generative Components has shipped as part of its Select Subscription.

To set your expectations, if you should venture to next yearÝs Research Seminar, then plan for long day. The presentations kick off at 9am and should finish around 5.30, although this invariably runs over time as thereÝs just so much fitted into the day. This year there were 13 presentations covering a number of projects, at various stages of completion. Here are some of my highlights.

The first presenter, Alastair Townsend from the intriguingly named Youmeheshe practice had the honour of going through how GC was used to design the first building to be built with the technology. The striking Cutty Sark Pavilion gets that Ùfirst-builtÝ accolade, despite almost coming a cropper in the terrible fire that engulfed the historic tea-clipper in London a few months ago. The Pavilion is a stretched fabric design and miraculously escaped with a few minor burns which can be easily repaired. It was great to see how GC was used to optimise the buildingÝs form. We will be covering Youmeheshe and their design process in more depth in the next issue. 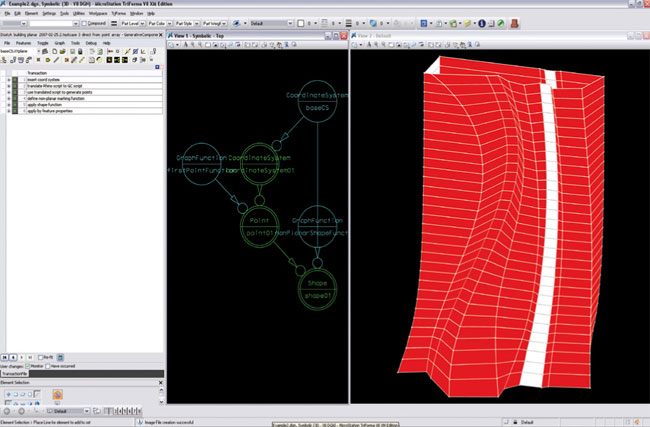 Having seen a GC-assisted building, the next speaker, Fabian Scheurer from ÙdesigntoproductionÝ Gmbh examined what I think is one of the more obvious missing links in this advanced computer geometry research, how do you fabricate your design? While there are many small rapid prototyping machines and CNC (Computer Numerically Controlled) cutters, the scale of architectural designs usually leaves current CAM strategies wanting. Architectural elements generated in the CAD system, need to be broken down into large numbers of smaller components so they can be manufactured. Scheuer gave a demonstration of how they go about automating and deriving these custom buildings systems for their CNC machines.

With two doses of real-world applications, Kaustuv DeBiswas a PhD student at MIT gave a demonstration on some fascinating and complex form finding work he had undertaken for dECOiÝs Bankside Paramorph project. DeBiswas had developed a technique to use GC to run an algorithm to find quadrilateral geometry that matched doubly curved surfaces.

SOM is a practice that has been at the forefront of 3D. Its Freedom Tower is well publicised as being designed using AutodeskÝs Revit but it has also signed a massive deal for Gehry TechnolgiesÝ Digital Project, the Catia-based modelling tool. Neil Katz from the company gave a two-part presentation, inspired by the beauty that can be generated with mathematics, first by examining how GC could be used in deriving artistic tiling and surface parametric effects. The second part of his talk covered ÙmorphologyÝ and how surfaces can be generated to satisfy a variety of project requirements, including different materials and constraints.

Shane Burger of Grimshaws looked at the computer/human interface, giving us an insight as to how these associative geometry models work in a team environment, given that itÝs not a natural fit. Grimshaws are in the process of developing a new design team methodology system that would allow models to be passed to a project team for manipulation, together with input from consultants and clients. The practice has already used some of this knowledge on the Museao del Acero in Monterrey, Mexico and on competition projects.

NBBJÝs very own Volker Mueller worked through various strategies researched for developing a complex fa?ade for a project in Kazakhstan, to aid constructability as well as economic and maintenance factors. The GC model allowed immediate feedback as to the non-planarity of surfaces.

KPFÝs Lars Hesselgren didnÝt give a presentation in the Architectural Research Seminar this year. I felt this was noteworthy as Lars is one of the GC pioneers and always manages to get on the presentation list! Instead two of his prot?g?es, Stylianos Ditsas and Mirco Becker stood in to give a commanding presentation on how they find form-oriented design an impediment to progress, preferring systematic approach to design derivation, being based on multiple performance constraints – radical thinking with beautiful consequences.

The design of the impressive Karachi Port Trust Tower was presented by Judit Kimpian of Aedas. GC was used to interrogate environmental, structural and architectural criteria and enabled the fine-tuning of this highly sculptured building Jeroen Coenders of Arup demonstrated the associative nature of structural systems built on GC. Jalal El-Ali of Buro Happold explored radical concept design using GC, with the model reacting to various environmental and structural inputs.

Foster and PartnerÝs Francis Aish, who is part of the Specialist Modelling Group, gave a presentation on design workflows which allow for the complexity of data that systems like GC will bring. If the geometry is linked to form finding and rationalising algorithms, together with performance simulation and analysis tools, then new user interfaces are required if all this information is to make sense and promote rapid evaluation for better decisions.

Finally Axel Kilian, an MIT PhD and GC-scene regular gave a fascinating talk about is work on actuated structures ± structures that kinetically adapt after construction, using pneumatic actuators. GC was used to build possible configurations of the structure to analyse the complex control system.

To sum up this yearÝs research seminar, there was something for everyone and on reflection, with the plethora of GC users and applications on show, the event was a subtle but very strong sales pitch for the benefits of GC technology. There were projects that were built, experts in going direct to manufacture, conceptual designs, experiences in optimisaton, first hand demonstrations on how GC eases complex geometry generation, fresh insights as to the impact on teamwork, applications in structural engineering, conceptual design and form finding. Put simply GC is allowing practices to experiment, interrogate and optimise designs that would not be feasible in any other out of the boxÝ way and its application is extremely broad.