Last year saw the launch of the AEC (UK) BIM Standard for Revit. As we approach the first anniversary of its release, we take a look at how the standard has been received in the market, as well as the next steps in updating the content and expanding its market penetration, writes committee member Paul Woddy.

For those not familiar with the AEC (UK) BIM Standard for Revit, it was developed as an extension to the generic AEC (UK) BIM Standard, released in November 2009. This non product-specific document refers to the techniques and concepts utilised in Building Information Management (BIM) technology.

The problem with any such text is in finding common terminology that does not favour or exclude any user base.

Project collaboration is a fundamental cornerstone of BIM.

The much larger Revit flavoured document has no such political pitfalls to avoid and looks to interpret and explain the generic theory with specific reference to the Autodesk Revit platform, supplementing it with further best practice and practical policy.

In short, if you represent a design practice that is looking to adopt BIM methodology and has chosen to use Revit as the primary tool to do so, then this document should cover your requirements.

Above all, the authors hope that this is a clear, concise and readable explanation of best practices in Revit and a solid foundation for efficient collaboration and communication. The no-nonsense language aims to be educational and informative as well as forming a basis of quality control.

Where did it come from?

Through various conversations the committee realised that like-minded representatives from several organisations had been tasked with adapting in-house standards to cope with the latest advances in technology and process. After reviewing what was available and coming up short, it was apparent that a new document would be required and so a committee was formed to pool resources and develop something that had a chance of receiving a wider acceptance than numerous independent standards.

A user group locked themselves in a dark room and kicked things off by sharing everything they had developed to date, a move that was indicative of the collaborative attitude of the whole process.

As with all voluntary committees, it is possible that this effort would have stretched on and fizzled out, with promises made and quickly forgotten with the dregs of the after-meeting drinks. In this case, however, one company in particular was willing to push the standards forward and ensure delivery in a sensible timeframe. By funding the chair of the committee and providing many hours of resource in different countries to collate and compile the information, Atkins is to be thanked in no small part for the end result.

Atkins needed a standard and what it achieved in leading the push was a document which has been somewhat tailored towards its own requirements, while incorporating the thoughts and feedback of a much larger group of industry experts.

What it also got is an increased chance that new recruits will already be very familiar with the standard and ready to slot right into the company. What the rest of the industry got is a document delivered in a timely fashion that cuts through the technical jargon and fills a much-needed gap.

Often the harder job is not to write a standard but to implement it and see it accepted by super-users in the team with their own ideas of best practice. Two things work in the favour of the AEC Standard; firstly the relatively new technology means that fewer strong opinions will have formed which are contradictory; and secondly, the backing of so many respected names within the industry.

Where is it now?

Twelve months later, is the standard being used? Does it require much work to fit it into the average practice and what do the end-users make of it?

Well, obviously Atkins is using it around the world, more or less as it stands in the publicly available version. Along with his colleagues at Atkins, Richard Scott-Smith was instrumental in the authoring of the standard, and is now heading the Atkins BIM deployment in the Middle East.

“Not only does the standard dictate actions within the project environment, but it also forms the backbone to all of the BIM training we give to staff,” says Mr Scott-Smith.

“Having a good, workable standard in place from the first time that a user experiences the technology and process is making a big difference to the early success of the software adoption.

“The industry is still learning what BIM is all about and we often find ourselves educating the client and supply chain. Introducing a strong standard to the team can really facilitate these discussions.”

As for other organisations involved in the process, John Evans of Capita Symonds has the following to say:

“In compiling protocols, Capita Symonds recognises that no one document can cover all bases and all circumstances, and as such has incorporated known industry standards enshrined in BS1192:2007/Avanti, CPIC, PIX Protocol, CI/Sfb, Uniclass, CAWS/NBS and AEC (UK) CAD Standards as well as the AEC (UK) BIM Standard for Revit. 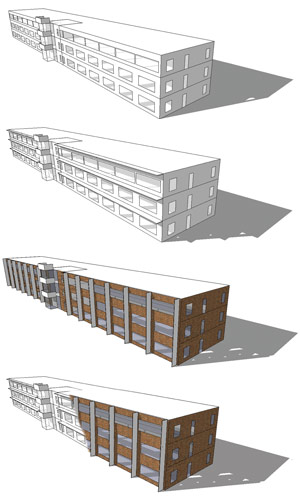 The standard looks to interpret protocols such as the BS1192 CDE for the Revit user.

“These standards form a foundation for the delivery of project data and the AEC(UK) BIM standard for Revit is a fundamental facilitator in the collaborative environment, helping to further drive Capita towards a more Integrated Project Delivery (IPD), a concept that is gaining ground following the lead by organisations and projects in the USA,” says Mr Evans.

“The adoption of a common standard is essential for a company the size of Aedas. We decided to implement the standard within Aedas as it follows very closely the principles of BS1192 which cross over from their previous BIM and AutoCAD workflows. BIM is still a very young marketplace; as such, more guidance is required to support the teams developing intermediate and complex projects in Revit and the AEC standards do just that. It has been actively running at Aedas for some six months and there have been very few issues raised by employees or even third party design teams who are keen to collaborate using these protocols.

“As with all new documentation there are some teething problems and Aedas are keen to feedback their experiences to help develop and form a more robust standard.”

Companies and individuals downloading the standard (www.aec-uk.org) are free to take on as much or as little as they wish, but the wider acceptance of the document as an industry standard would require that it remain as close as possible to the original form.

If you download it and find it needs modification then the committee request that you let them know as it may be that a revision is required or deemed universally useful.

One glaring omission from the standard is a section on Families, which was pulled at the last moment as we had too many aspects that were still open to discussion as we reached the self-imposed deadline. This will hopefully be rectified shortly.

The committee would welcome any and all feedback in developing future releases, the next of which is planned for spring 2011, where we will incorporate changes and technological advances, as well as look to expand the scope and audience for the document into the wider BIM ecosystem, incorporating other professions in the design and construction process, such as quantity surveyors, specification writers, fabricators, manufacturers, contractors and facility managers.

If you have any questions or feedback on the standard then feel free to contact myself on paul@revitguru.com or any of the other committee members as mentioned on the above web site.