For the launch of Twinmotion 2020, Greg Corke caught up with Marc Petit, General Manager, Unreal Engine Enterprise to explore what Epic Games has in store for the easy-to-use arch viz tool

Last year Epic Games took the AEC sector by surprise by acquiring the easy-to-use arch viz tool Twinmotion and then giving it away for free. Now, just short of half a million downloads, the company has launched Twinmotion 2020.

With this new release Epic Games is continuing its aggressive drive to build a large customer base. Those that registered for Twinmotion 2019 will now get a free perpetual license of the 2020 release. And those that didn’t, can currently get 50% off the $499 purchase price for a limited period. And to top it all, everyone gets two years of free upgrades.

Marc Petit, General Manager, Unreal Engine Enterprise at Epic Games, told AEC Magazine that he has set his sights on seven-digits in terms of number of users, but admitted that there is still a massive awareness problem.

“When you look at the number of Revit users, the number of SketchUp users, if you want to declare yourself successful in this market, you have to be able to go one million, two million seats, given the size of the market. Which is interesting because, right now, none of the existing products have actually reached that level of volume. It’s all very fragmented. They are either expensive, or they’re dead-end products, or they’re hard to use.”

Twinmotion is based on Unreal Engine, so one of the big attractions is interoperability between the two tools. The idea is that an architect can start a project in Twinmotion for early stage design validation or communication and then hand over the asset to a viz specialist for further development in Unreal Engine. This has been on the roadmap for some time, even prior to the acquisition, so it’s surprising that this feature is not part of the 2020 release. Petit told us that the technology is there, but there are some ‘legal issues with the content’.

One of the big challenges for Epic Games, and indeed any developer of real time viz software, is how to make Twinmotion work well on entry-level workstations that are typically used by architects. Applications like Revit and SketchUp put relatively low demands on a workstation’s GPU, so there has been little need for architects to invest in more powerful ‘gaming’ GPUs.

“We’ve introduced things like screen space global illumination, which is a little bit of a trick, but it allows everybody, even when you have an Intel graphics system, to actually benefit from that.”

At AEC Magazine we haven’t yet tested the software, but experience tells us that even with these optimisations the application still probably won’t perform that well with an entry-level GPU. In response, Petit makes the important point that Twinmotion is not just about real time 3D. It also has an offline mode where a still image or video can be exported, and each frame then rendered by the GPU. “If you have low power graphics, that process can take a few minutes, but then you get super high-quality output,” he says, adding that two thirds of the deliverables produced by users of Twinmotion are actually fixed images or a video, rather than a real-time experience.

Extending the reach of assets

Sharing projects with stakeholders has been made much easier in the 2020 release with “Twinmotion Presenter”. The software enables users to share individual projects in a standalone viewer in a lightweight package, with the option for multiple points of view and camera paths, and either a locked view, guided, or free-to-explore options for viewers. This is an important development, but Petit admits it is not a perfect solution.

Stakeholders face similar challenges to users of CAD or BIM software, insofar as the quality of the experience is highly dependent on the power of their hardware.

“What we would like to have is a solution where everybody gets the same high-quality experience regardless of the device they consume the content on – it could be a phone, an iPad, or a TV in a conference room,” says Petit. ”And to get to there, you need to deploy pixel streaming, right?”

Pixel streaming is where the graphics processing is carried out remotely and not on the client device. Petit would not be drawn on how this feature might be delivered or when it might arrive, but it would certainly help solve a big challenge in the AEC industry. Real time 3D content is becoming much easier to produce, but there’s still a big barrier to getting it into hands of clients, team members or members of the public. At AEC Magazine we imagine it would be a cloud service, possibly on subscription or pay as you go. Epic Games can certainly make software cheap or free, but GPU-accelerated Virtual Machines cost money.

To get data into Twinmotion, the 2019 release featured ‘Direct Links’ to ArchiCAD, Revit, and SketchUp. This has now been extended to Rhino, enabling Rhino and Grasshopper data to be synced with Twinmotion in a ‘single click’. Organisation and hierarchy are retained, and native materials are automatically substituted with Twinmotion PBR materials. 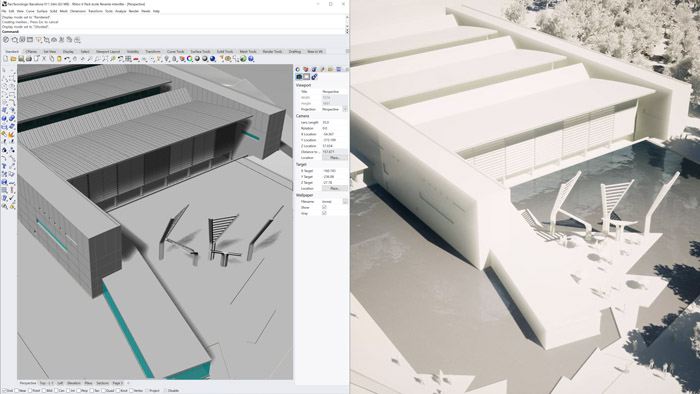 Twinmotion is also taking an important first step into design review. The 2020 release features a new note tool that lets users annotate elements within a scene and then export them to Revit, ArchiCAD, and other BIM tools.

The core user base for Twinmotion is architecture but this is expanding, “The one thing I was surprised is the amount of infrastructure projects – Infraworks, Civil 3D,” says Petit, adding that this is done via the FBX format. Epic Games is also looking to get Twinmotion more into construction software, specifically bringing animation to construction sequencing. 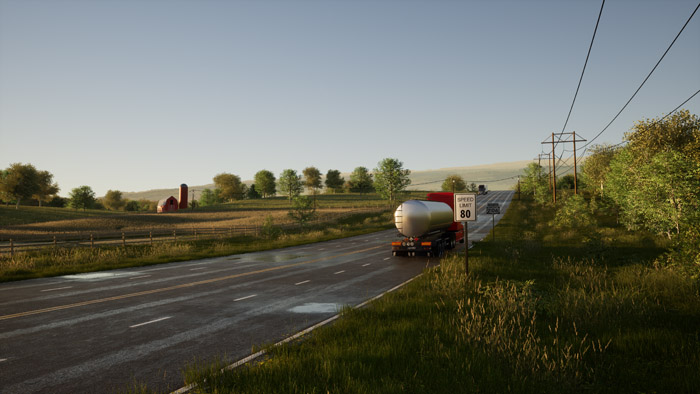 In a relatively short space of time, Epic Games has become a major player in arch viz. Half a million downloads of Twinmotion is a substantial number and while this doesn’t necessarily mean active users, reported average session lengths of 45 mins shows there is engagement.

The good news is development is moving at pace. The 2020 release brings several visual enhancements detailed below, and the link to Rhino gives Epic Game a more solid footing at the conceptual stages of architectural design. There’s also some exciting stuff coming in the future, including pixel streaming for effective distribution of assets and the link to Unreal Engine which will transform viz workflows for many AEC firms.

All this points to a strong future for Twinmotion and while many will have missed out on the free offer, it’s still possible to get on board for $250, which still looks exceptionally good value.

An array of new lighting features have been introduced, including a new screen-space global illumination (SSGI) method for dynamic indirect lighting, a physically-based atmospheric sun and sky model for more realistic exterior renders at different times of day and year, an area lighting tool to accurately fill spaces with diffuse lighting, a volumetric lighting tool for accurate light ray effects through particles such as fog or smoke, and cinematic depth of field. 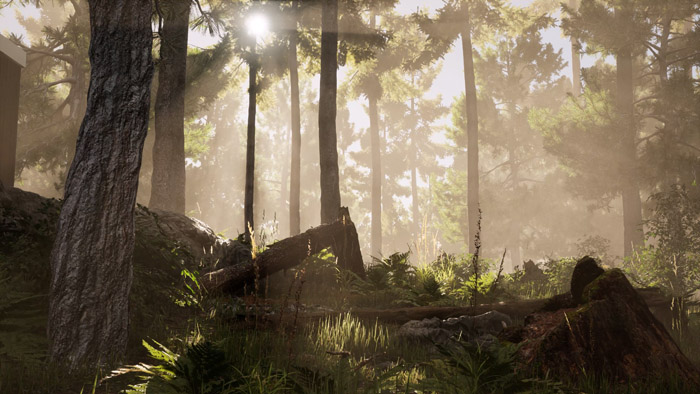 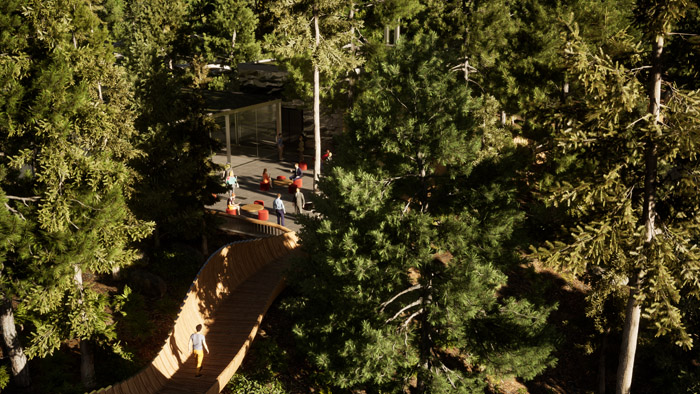 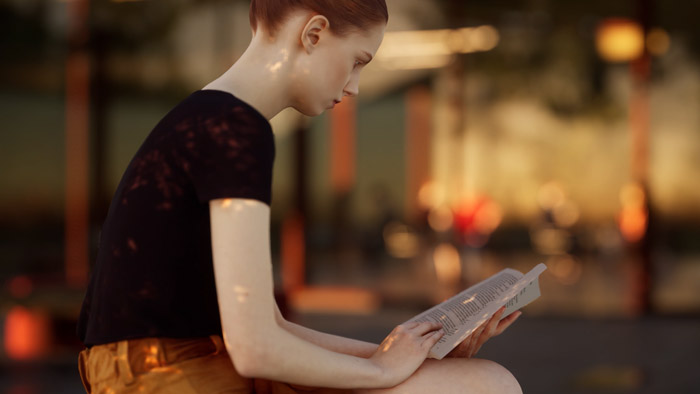 Users can now import and use H264-encoded video as a material, enabling animated features such as an TV playing or a flickering fireplace. A new Frosted Glass material makes it easy to simulate translucent glass (such as privacy windows) and accurate light scatter. An enhanced Glow material uses screen-space global illumination (SSGI) to enable those objects to act as a light source. Additionally, a new X-Ray option lets users see the position of objects occluded by other objects, allowing for easy visualisation of MEP data such as pipe or air duct locations. 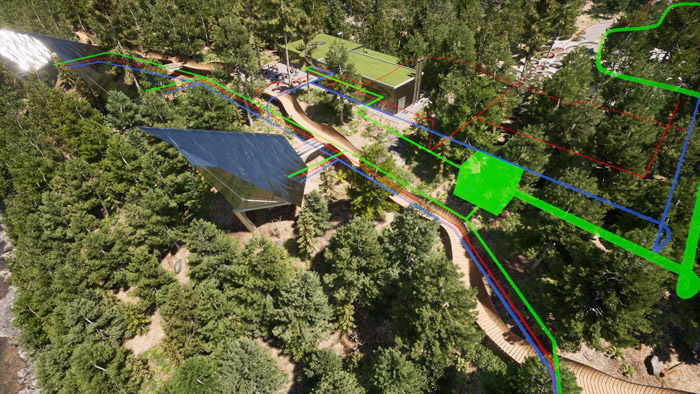