Both the Celsius M740 and R940 feature an abundance of CPUs and GPUs – the biggest choice out of all the major manufacturers. 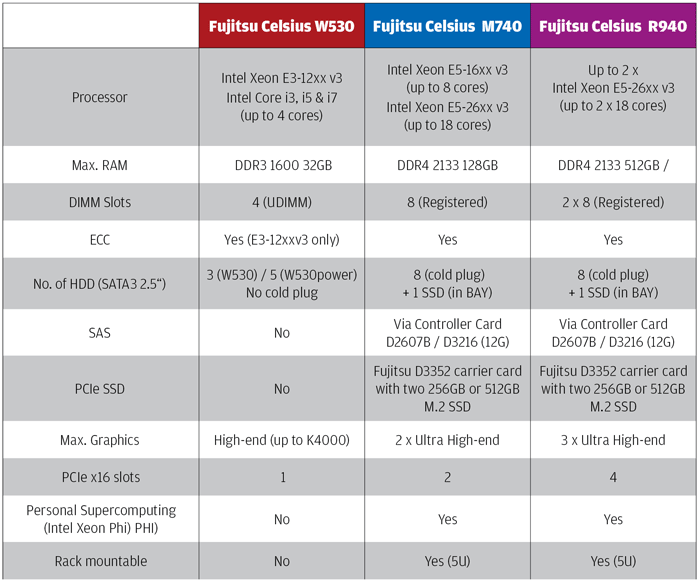 Supporting more powerful processors than its predecessors, including the 160W Intel Xeon E5-2687W v3, Fujitsu has had to up the wattage of its Power Supply Units (PSUs). The standard Celsius M740 and Celsius R940 models come with a 750W and 1,000W PSU.

Fujitsu also offers ‘power’ models of both machines for customers that max out their machines with multiple CPUs, GPUs or co-processors. The Celsius M740power and Celsius R940power take the PSU up to a whopping 1,350W and 1,700W.

Of course, more power means more heat to get rid of so Fujitsu has had to up its game in the cooling department. Like all modern workstations it draws air in at the front and expels it at the rear, using as big fans as possible to minimize the RPM and therefore noise.

To increase airflow at the top of the machine Fujitsu has replaced the 5.25-inch optical drive with a slimline model. The gap it creates not only aids cooling but has enabled the engineering team to build a handle into the chassis to make it easier to move the workstations around. 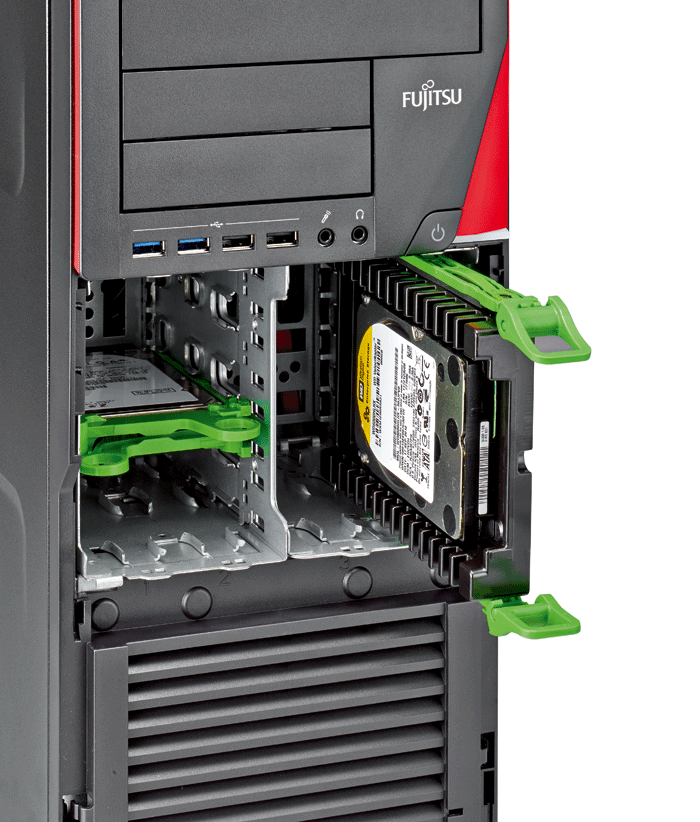 As with its predecessors, both the Celsius M740 and Celsius R940 boast a nicely designed front-loading drive bay, which can house 4 x 3.5-inch drives or 8 x 2.5-inch drives. ‘Easyrails’ are used to grip the drive on both sides and it is then levered it into the enclosure. Metal grooves guide it into place, automatically connecting to power and data thanks to blind mate connectors to the rear of the drive bay.

This is great for maintenance, or for moving drives between machines, but it’s also possible to restrict access by locking the front panel. Fujitsu offers a variety of drives including SSDs, SAS and HDD.

Adding to the storage options Fujitsu has now introduced a PCIe SSD, which it claims offers double the read/write performance of a SATA-based SSD. This features two third-party 256GB or 512GB M.2 SSDs mounted on a PCIe board that was developed by Fujitsu.

Both M.2 SSDs are currently treated as individual drives but it may be possible to ‘RAID’ them in the future. Later in the year Fujitsu is set to introduce a model with a single M.2 SSD, which should give a much lower cost of entry to high-performance SSDs, much like HP has done with its Z Turbo Drive. Fujitsu says it will cost 1.2 times that of a standard SATA SSD.

Fujitsu has also made some less visible improvements, one of which makes it easy to ensure data security when retiring or passing on machines. Its BIOS-level Erasedisk tool, which makes it easy to permanently delete data from hard disk drives without needing to boot into Windows, now supports SSDs as well as Hard Disk Drives (HDDs).

Fujitsu has also improved its personalized pre-installation service, which allows customers to get software and hardware pre-installed. This could be things like BIOS settings and RAID configurations or even printer settings. It is also possible to specificity profiles for individual users within the company. 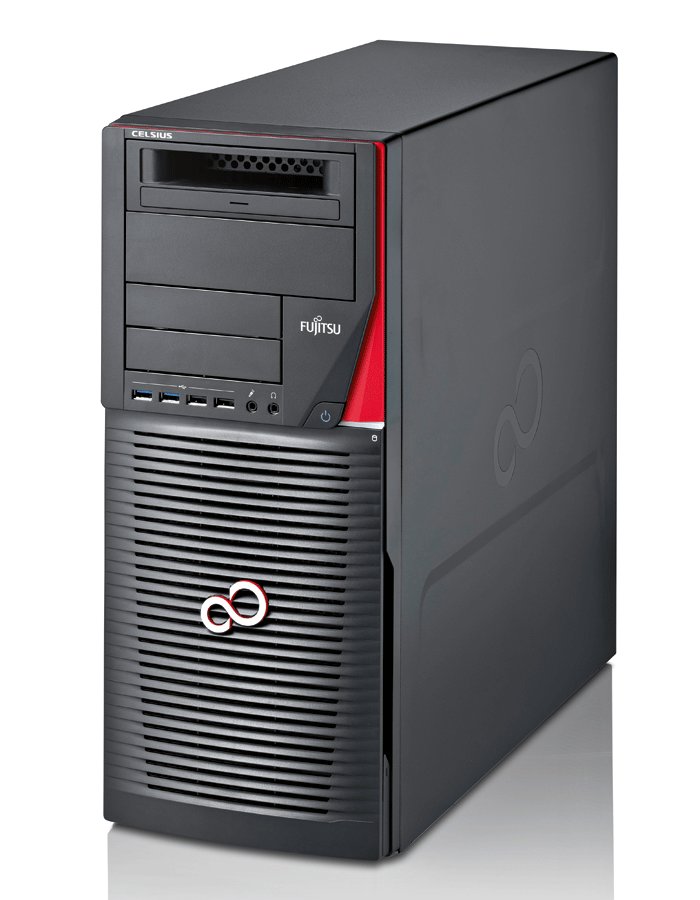 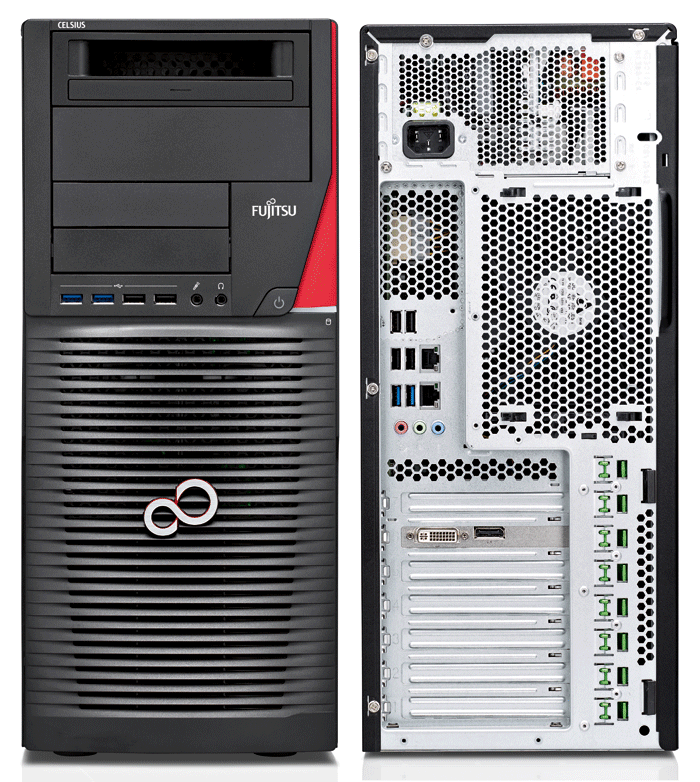 Support for Nvidia GRID enables Fujitsu to have a truly scalable Virtual Desktop Infrastructure (VDI) capability in its Celsius M740 and R940 that it can’t currently offer with its dedicated rack workstation, the Celsius C620.

With support for up to 32GB memory, quad core CPUs and a single GPU, the 1U Celsius C620 is more tuned for remote CAD access on a one-to-one connection using Teradici PCoIP technology. The Celsius M740 and R940 offer much bigger scalability and can also be placed in a 5U rack chassis.

As the Nvidia GRID K1 and GRID K2 are designed for servers they are passively cooled Fujitsu has had to develop a custom cooling solution to make them work inside its desktop workstations.

This also enables the company to offer the Intel Xeon Phi 5110P, a powerful PCIe compute board for HPC that can be used to accelerate CAE software including Altair and NX Nastran. Fujitsu also offers the actively cooled Intel Xeon Phi 3210A.

Meanwhile, check our our coverage on the new Haswell-based Intel Xeon E5 v3 workstations from HP, Dell and Lenovo