Lenovo’s updated slimline mobile workstation features an enhanced Quadro GPU and a quad core CPU. It may not have the performance or good looks of its peers but it wins hands-down when it comes to battery life, writes Greg Corke

The ThinkPad P52s has a 15.6-inch display and a backlit keyboard with numeric keypad

Dell transformed the 15-inch mobile workstation in 2013 with the launch of the Precision M3800. The stylish laptop was thinner and lighter than anything that had come before but it still delivered the goods for 3D CAD thanks to its mid-range Nvidia Quadro GPU. HP then followed suit in 2015 with the similarly specced HP ZBook Studio.

Lenovo chose a different tack for its slimline 15-inch mobile workstation, making battery life the number one priority. Its latest model, the ThinkPad P52s, should run all day long without having to plug into the mains, even when running 3D CAD.

The laptop achieves this, not through one but two Li-Ion batteries: an integrated front 4-cell (32Wh) battery, as well as a removeable rear battery which comes in a choice of three different capacities – 3-cell (24Wh), 6-cell (48Wh), or 6-cell (72Wh). In contrast, most other mobile workstations only have a single battery that is completely built in.

As the rear battery can be easily swapped out, battery life can be extended even further by carrying a spare in your laptop bag. You can even ‘hot swap’ the external battery without having to power down. Simply shut the lid, flip the switch and pull it out. The machine will keep running on the integrated battery.

Our test machine came with a front 4-cell (32Wh) and a rear 3-cell (24Wh) battery. This might not be the top spec, but it still managed to last an impressive 235mins in the demanding PCMark OpenCL media battery test which continually hammers both CPU and GPU. 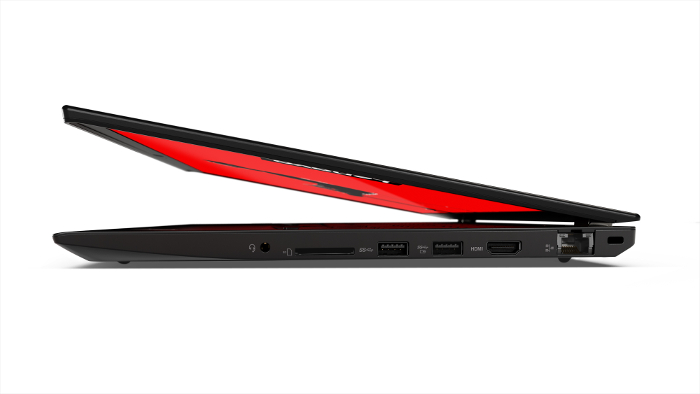 The slimlime mobile workstation is just under 20mm thick and weighs from 1.95kg

If fitted with a 6-cell (72Wh) external battery we reckon it could go for over 400 mins. And, in more realistic day to workflows, considerably longer. Indeed, Lenovo quotes an incredible 26.3 hours when running the less demanding MobileMark 2014 benchmark.

The downside of the 6-cell (72Wh) external battery is its size, which makes it protrude from the machine. The good news is you can pick and choose your batteries, depending on your power needs as spares only cost about £70.

Packing out the machine with multiple cells is not the only way the ThinkPad P52s achieves such good battery life. Lenovo has also chosen the CPU and GPU very carefully to minimize power usage.

The Intel Core i7-8650U CPU is a very low power quad core processor, with a thermal design power (TDP) of 15W. This is one third of what you’d find in a typical mobile workstation, although power consumption can go a bit higher at peak loads.

In addition to reduced power consumption, the ThinkStation P52s also benefits from a very compact power supply. The 65W USB Type-C AC adapter is one of the smallest and lightest we’ve ever seen, as illustrated in figure 4.

Of course, the low-power processors do impact performance but not as much as one might expect and it is dependent on workflow.

The Intel Core i7-8650U keeps power in check by having a very low base frequency of 1.9GHz, but a turbo of 4.2GHz. In practice this means good performance in single threaded CAD applications, where the CPU is able to run close to 4.2GHz. Indeed, in our SolidWorks IGES export test it ran at 3.8GHz dropping from 4.2GHz over the 108 seconds it took to complete. It was only marginally slower than the 17-inch Dell Precision 7720 we reviewed in January that had an Intel Xeon E3-1535M v6 (4 cores, 3.1GHz, 4.2GHz Turbo).

In multi-threaded rendering applications, you can see the limitations of the low power CPU as it stays close to its base frequency when all four cores are in use. Compared to the beast that is the Dell Precision 7720, it took 50% longer to complete our KeyShot render test, dropping from 2.4GHz down to 2.2GHz.

Still, this is a significant improvement over its predecessor, the ThinkPad P51s, which only had two cores to play with, with an Intel Core i7-7600U (2.8GHz, 3.9GHz Turbo).

Graphics has also improved considerably generation on generation, with the ThinkPad P52s boasting the new Pascal-based Quadro P500. In CAD applications, SolidWorks, PTC Creo and Autodesk Revit, we found 3D performance to be on par with Lenovo’s micro desktop workstation, the ThinkStation P320 Tiny, which has a desktop Nvidia Quadro P600 GPU.

As far as 3D CAD and BIM is concerned, the ThinkPad P52s should be able to handle most entry-level to mainstream workflows – as long as the datasets and applications don’t need more than 2GB of GPU memory.

The laptop is not really geared up for game engine visualisation or GPU rendering. However, in saying that, the 23 Frames Per Second (FPS) it achieved in our Autodesk Revit Live game engine benchmark should give users a perfectly acceptable experience.

Our test machine benefits here from its FHD (1,920 x 1,080) display – a solid, if not outstanding anti-glare Multitouch IPS panel. If our ThinkPad P52s had been configured with the optional 15.6” UHD (3,840 x 2,160) IPS panel, then game engine viz applications would likely have put too big a strain on the entry-level GPU with frame rates dropping to unacceptable levels due to having to render more pixels. Impressively, in all of our testing, fan noise remained very low.

Memory is pretty standard for a machine of this class, with a maximum of 32GB of 2400MHz DDR4 dual-channel memory which should be more than adequate for most CAD users. In the future, this could extend to 64GB when 32GB SODIMMs become available.

The machine can be configured with a 2.5-inch Hard Disk Drive (HDD) or an NVMe M.2 Solid State Drive (SSDs). Unfortunately, it’s not possible to have both at the same time, as they occupy the same space inside the case. This is a bit of a design flaw as it means you can’t have the best of both worlds – the performance of NVMe SSD storage for operating system and applications and the low cost per GB of an HDD for data. 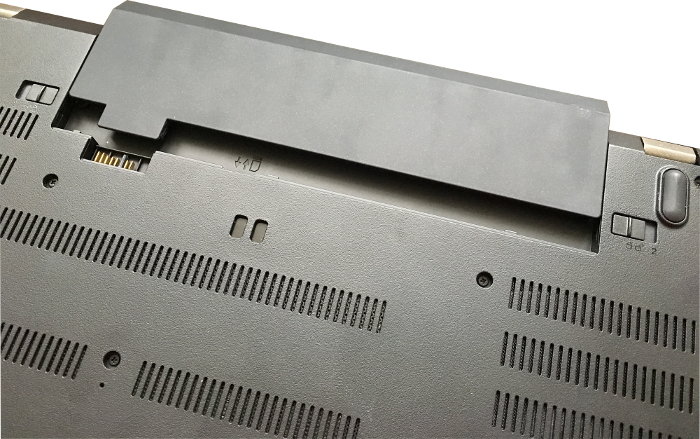 The ThinkPad P52s is unique among slimline mobile workstation as it has two batteries, one of which can be easily removed without powering down

We’d never recommend an HDD on its own these days, however tight your budget, simply because the performance trade-off is so big. If you want to choose a 1TB NVMe SSD over the standard 256GB model it will cost an additional £342.

The 2.5-inch HDD and dual batteries contribute to a case that is slightly thicker and bigger than the competition. However, at 19.95mm x 365.8mm x 252.8mm it’s not exactly bulky and with weight starting at 1.95kg, still very portable – especially when you consider you probably won’t need an AC adapter in the bag.

There are some contemporary features including a front facing Infrared camera that supports Windows Hello technology, so you can use your face for authentication or for logging in. In addition, the bundled Mirametrix Glance software allows the machine to automatically lock when you look away for a set time, then unlock upon your return.

There are also some neat features when using multi-monitors. For example, click and hold a window titlebar, look at a new screen and the window will teleport there instantly. Alternatively, press CTRL and look at a new monitor and the pointer will automatically move to the centre of the screen.

The ThinkPad P52s can also be configured with a standard HD720p camera that comes with a shutter that physically blocks the camera for guaranteed privacy, spelling an end to the DIY sticky note solution.

For security, there’s an updated fingerprint reader on the palm rest that uses touch rather than swipe for easier authentication. The multi touch trackpad is large and the Mylar surface offers just about the right amount of resistance. There’s also the classic Trackpoint, for those that prefer this alternative input device.

The optional LED-backlit keyboard is comfortable and a pleasure to type with. The inclusion of a numeric keyboard is a bonus for designers and engineers, a feature that you won’t find in the Dell Precision 5530 or HP ZBook Studio G5.

The laptop can be charged over USB Type-C, which is a nice feature if you want to cut down on cables and charge from a compatible desktop monitor, for example. For older monitors, there’s an HDMi port but you’ll need the optional adapters to connect to DisplayPort (USB-C) or VGA (HDMi). 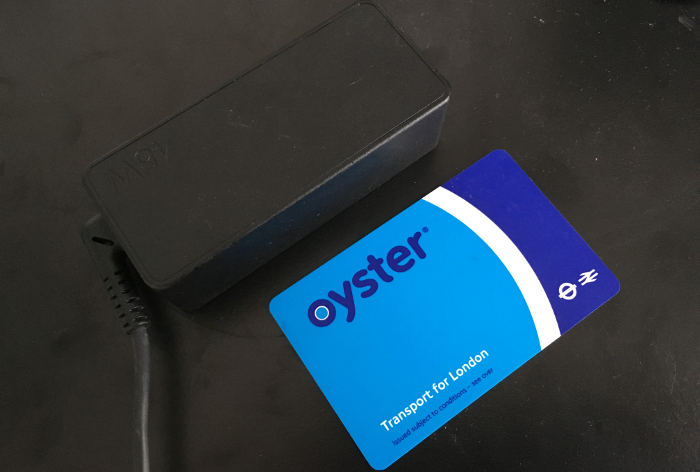 Lenovo’s ThinkPad P52s might not be the thinnest, lightest or most powerful slimline mobile workstation but it certainly wins hands down when it comes to battery life. And in a world where designers are becoming more and more mobile, it’s great to have a CAD-capable laptop that you truly don’t have to worry about charging during the day.

Yes, the highest capacity rear battery adds to the bulk, but it’s a small price to pay if you’re travelling long distance, out on site, or simply want complete freedom to work anywhere.