HP?s dominance in the wide format inkjet printing market is widely reported and its DesignJet 800 Series and DesignJet 1000 Series have set the standard for individuals and workgroups for some years now.

However, not one to rest on its laurels, HP has just released a new generation of ?Technical? DesignJets to replace these now ageing products. The DesignJet ?T Series? is comprised of two models, the DesignJet T610 and DesignJet T1100 – the key difference being that the T610 is classified as a personal printer, while the T1100 is targeted at workgroups.

As you?d expect from a technical printer, the DesignJet T series is optimised to deliver excellent line drawings and renderings, but also produces first rate photo prints on glossy paper.

Both the T610 and T1100 are available in 610mm (24Ë) and 1118mm (44Ë) sizes, which accommodate A1 and A0 (oversize) paper respectively and each machine holds a single roll (though sheet feed is also available). Six 130ml cartridges provide the ink. 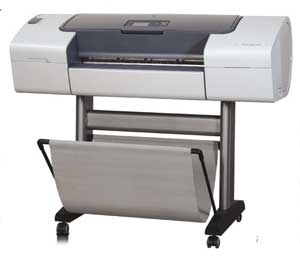 Moving on from a traditional four colour print system, the DesignJet T Series features ?three blacks?, which is a technology borrowed from its graphics art printers. Three blacks means that users not only have access to the traditional matt black which has always been incorporated in technical printers, but also get photo black for true black on glossy paper and a separate grey to help achieve better grey tones. This means better colour accuracy for black to white transitions, metallic parts, and concrete, for example, which were previously made up from a combination of Cyan, Magenta and Yellow.

The Cyan, Magenta, Yellow, Photo Black and Grey are all dye-based inks for added vibrancy, while the matt black is a pigmented ink design for longevity Ê making it suitable for archiving line drawings, for example.

In addition to more accurate colour reproduction, HP has made great strides in its definition of vertical and horizontal line widths. These are now much more accurate and consistent than previous DesignJets, with line accuracy +/- 0.1% and line width as fine as 0.0423mm. This fidelity is apparent on even standard inkjet paper.

Print head monitoring is also featured in the T Series. Here, if one of the many print nozzles stops working, the machine automatically detects and re-directs to another nozzle so you don?t get a white line across your print.

In terms of raw print speed, HP says the new T Series is twice as fast as an 800 Series and anywhere from 50% – 100% faster than a 1000 Series depending on the type of prints. However, in addition to enhancing the speed of putting ink on paper, HP has also concentrated on improving overall productivity.

This is most apparent when carrying out multiple prints. The T1100 features on board processing through an embedded work server, so if you send ten prints to a T1100, for example, your total throughput time will be the time it takes to process the first print, plus the time it takes to print all of the rest of them. This is because it can process the next job while printing the one before.

With print engines identical in both the T610 and T1100 the main difference between the printers revolves around personal vs workgroup printing. The T610 is a personal printer designed for small studios of one or two users. It doesn?t have a network interface as standard, and it doesn?t have a hard drive for job queuing.

The T1100, on the other hand, comes with a hard drive for print job spooling and HP?s JetDirect card, which means it can plug straight into the network offering managed queues, remote job submittal, and job accounting.

Another difference between the two is the amount of built in memory. The T610 features 128MB while the T1100 has 256MB. This shouldn?t make a difference on most print jobs, but if you?re printing complex files, such as renderings or full colour maps, the T1100 will certainly be more efficient.

However, even with the 610, you?ll never be left in a situation where you can?t print as there?s always the option to process on the computer if your files are too complex.

The T1100 also has a neat feature that will notify users when their job is at the top of the queue. This is particularly useful when one off prints are required on glossy paper. In this situation, if the machine is loaded with standard coated paper it can notify users, via a pop up, when their print is at the top of the queue. The printer will then pause and allow them to load up glossy for their print.

If it?s not convenient, however, they can either tell the system to ahead and print on the media that?s loaded, or to put the print job on hold until they?re ready. This should put an end to wasted hours hovering over the printer waiting for your print to come.

Of course, in high volume print environments a DesignJet 4500, which has capacity for two media rolls, is a more effective solution, though you?d expect this from a production level printer.

For those who deal in PDFs, a postscript version of the T1100, the T1100ps, enables users to send a batch of PDFs directly to the printer without having to first open them on their workstation.

So there you have it, yet another impressive DesignJet printer from HP. The six ink print system in the T Series sets new standards in black and grey reproduction and line definition on even the most detailed of drawings is superb. However, it?s in the areas of overall productivity that HP has made greatest strides. While on-board processing on the T610 will help boost print performance, the T1100 with its additional memory, hard drive, managed queues, remote job submittal, and job accounting, continues to close the gap between workgroup and production printing – though the DesignJet 4500?s faster print speed, multiple media rolls and higher capacity ink cartridges still make a huge difference.