It might use virtually the same pro driver as the Radeon Pro WX 9100 (so will benefit from the pro 3D application optimisations), but it will not have the ISV certifications. It also comes only with a one-year warranty, whereas the WX 9100 offers three years. As a result, the Frontier Edition will not be available in workstations from major OEMs, only from specialist manufacturers.

In terms of core specs, both cards are virtually identical – 4,096 Stream processors and 16GB of superfast HBM2 memory. However, the Frontier Edition GPU is clocked higher, which results in better performance. It also means it draws more power – up to 300W, compared to 230W on the Radeon Pro WX 9100.

Those thinking of upgrading to Vega will need to make sure their workstation power supply can deliver enough watts and the motherboard/chassis can accommodate a full-length, double-height graphics card.

We tested both cards inside a 4.2GHz overclocked Intel Core i5-4690K workstation running Windows 10, using AMD’s 17.Q4 driver for the WX 9100 and a 17.Q4.1 driver for the Frontier Edition. For comparison, we also tested the single-slot ‘Polaris’ Radeon Pro WX 7100 and the ‘Pascal’ Nvidia Quadro P4000 and P5000 with the 385.90 driver. In our SolidWorks 2015 and PTC Creo 3.0 benchmarks, all five cards delivered very similar high scores, indicating they will offer more than enough performance for 3D CAD and BIM. SolidWorks recognised the Frontier Edition as a professional GPU and therefore allowed us to turn on RealView. This would not be the case with a consumer Radeon GPU.

In more demanding 3D applications, the performance of both Vega cards was good, generally sitting between the Quadro P4000 and P5000, depending on application, although in Autodesk Revit Live and Autodesk VRED with anti-aliasing enabled, they were a touch slower than the P4000. Looking at the results from the VRMark Cyan Room test, AMD appears to have an advantage over Nvidia in applications that use the DirectX 12 graphics API, that should appear in game engine viz tools soon. Both GPUs also performed well in VR in a number of pro VR applications using an Oculus Rift.

We also tested for GPU rendering in V-Ray, (in which Nvidia had a clear lead) and in Radeon ProRender (where both Vega GPUs edged out the Quadro P5000). It’s important to note here that V-Ray works in two modes: with CUDA (an Nvidia optimised technology) and OpenCL (an open standard championed by AMD).

However, as more development work has been done on the CUDA engine than on the “experimental OpenCL mode”, Nvidia GPUs are always likely to do better here. Radeon ProRender only uses OpenCL, so the GPUs are on a level playing field as far as the API is concerned. However, as Nvidia puts more resources into making its GPUs run fast on CUDA, and Radeon ProRender is developed by AMD, one would expect AMD to have an advantage. In short, GPU rendering performance is dependent on the software, as it is with 3D.

At £758 + VAT, the Radeon Vega Frontier Edition offers a whole lot of power for the price. It looks to be a great companion product for SolidWorks, as it can also be used for ray trace rendering in the free Radeon ProRender for SolidWorks plug-in. It should also be great for real-time viz at high resolutions and is VR Ready, not just in terms of performance, but also in that it boasts an HDMi port for easy hook-up to an Oculus Rift or HTC Vive.

The Radeon Pro WX 9100, despite delivering slightly less performance than the Frontier Edition, is significantly more expensive. Here, you pay for warranty and certifications, which are important for some design and engineering firms. The WX 9100 can also be used for hardcore visualisation on multi-display powerwalls, as it has 6 Mini DisplayPort outputs and can be synced to GPUs in other workstations.

Overall, Vega looks to deliver some good competition to Nvidia in some (but not all) pro workflows. It’s very dependent on the application and, of course, the price. 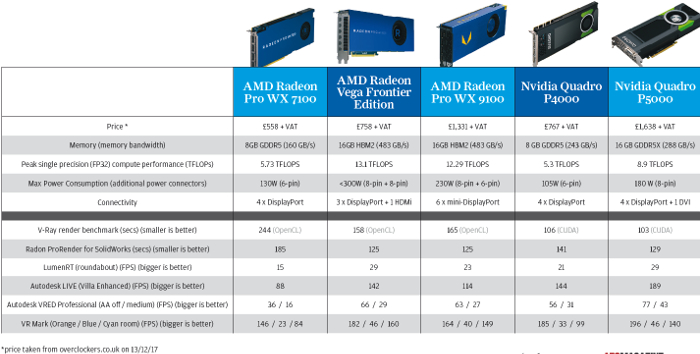 Choosing a workstation? It’s not that straightforward
How to future proof your workstation to support new and emerging product development workflows

Rendering beyond the CAD workstation
When rendering work is on the cards, what’s the best way for a firm to get its machines and its workflows up to speed?