Virtual Reality (VR) may be a hot technology in the AEC space, but Augmented Reality (AR) looks set to be just as big and, thanks to Apple, BIM users are starting to see useful applications hit the market

When Apple introduced its iPhone 8, 8 Plus and X models back in September 2017, the company’s brand-new Augmented Reality capabilities took centre-stage.

These are enabled by the combination of the A11 Bionic processor and the ARKit (Augmented Reality kit) development platform. First shown in June 2017, the ARKit enables developers to display dynamic, high-fidelity 3D models in the real world, viewable onscreen by mixing them with the live image from the camera lens of an iPhone or iPad.

Given the incredible popularity of Apple mobile devices, Augmented Reality (AR) is now within reach of millions of consumers and design professionals. In fact, it has kick-started a rush to develop AR applications.

If 2017 was the year that Virtual Reality (VR) become accessible, 2018 is surely going to see AR, or ‘Mixed Reality’, become a common tool in the building design market.

Vectorworks has been one of the first BIM developers to launch free AR capabilities. Included with Vectorworks Nomad, the company’s mobile viewing app, the new functionality enables the viewing of Vectorworks CAD/BIM models in situ through an Apple mobile device. This could include looking at a BIM model projected on a table top, for example, or the proposed layout of desks and chairs within an office at a scale of 1:1.

AEC Magazine caught up with Alex Nicol, mobile team manager at Vectorworks, in order to discuss the application’s capabilities and to get an idea of where the firm’s AR development is going.

According to Nicol, development of Vectorworks’ AR capability was fasttracked when Apple launched the development kit. Work started in late August 2017 and the product was released in mid- January 2018.

In the first two weeks of release, over 200 users accessed the AR tools, launching over 1,000 sessions. From this, Vectorworks has already received a lot of positive feedback from users, together with a sizable wish list of suggested new features.

Getting to grips with Nomad

To use the AR capabilities in Nomad, you will first need to be a Vectorworks customer, to generate BIM models and then have a Vectorworks cloud services account, which is free. Models will need to be uploaded to the cloud, where they will be processed and ‘thinned out’. This takes between one and three minutes, depending on size and complexity.

The Nomad app running on an iPhone or iPad then connects to the Vectorworks cloud and indexes the processed models, which can then be loaded.

Holding the iPhone at an open space, with a single tap, the Vectorworks model loads into the camera view. At the moment, Apple’s ARkit has the ability to find horizontal surfaces, such as floors or tables. If you want the model on a table top, the system recognises textured/patterned surfaces best and it helps if there is plenty of light.

Once placed, the model remains in place and can be scaled up or down, to appear on a table, or fill the entire room or site. As the user moves around the real-world space, the display updates the model in real time. The speed of the display is also based on the size and complexity of the model, which the user controls. Obviously, the lighter the model, the less processing is needed, so the smoother and quicker the AR rendered objects appear on screen.

Nicol explained that while VR has its uses, users need to factor in the additional cost of buying a dedicated headset, which may not be particularly portable. By contrast, Apple’s iPad and iPhone are pieces of kit that people often already have with them and don’t require any complex set-up, unlike many VR systems.

(It’s worth noting here that Apple is allegedly developing an AR headset for 2019 and Nicol mused that, with AR glasses, users could search in context of their location and receive information related to the real-world objects that they view, on demand.)

However, it’s early days and there’s a lot of work to be done. Current limitations with version 1 of Apple’s ARkit mean that it can’t recognise vertical surfaces in a view. And because AR is very demanding on processors, it can’t be run on any iPhone or iPad that uses a processor lower than an A8. In fact, it really works best on an A9 processor.

Performance may also be impacted by what else the device is doing or what is running in the background but, at the moment, the developers don’t have much feedback on that issue. Also, the user experience may vary, depending on model complexity. 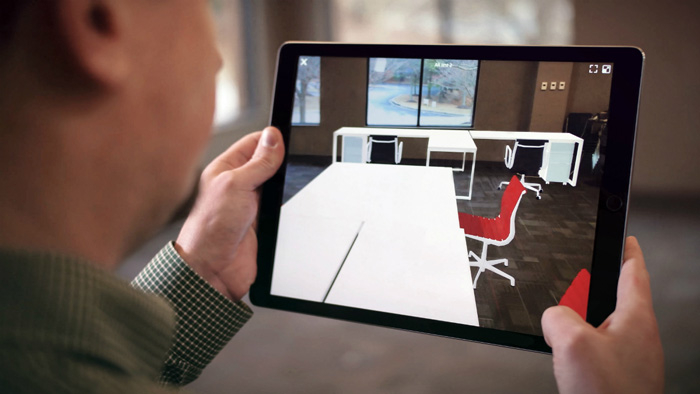 Visualising what an office layout, actual size, might look like in the context of a real office

Customers are keen to have more control of their models but for now, the models are hard-baked. In other words, you can’t just add a few additional chairs or objects within the AR experience.

Also, if you bring in a model that has multiple floors, it’s not possible to get off the ground floor or lower the model to match the real world. The good news is the next release of the ARkit, due imminently, will enable verticals to be identified, as well as assist in more accurate placement of models and hopefully the editing of planes. The updated kit will also support the recognition of images within a scene and Nicol reckons that Vectorworks can use this to identify origin points in the real world, to which AR models can map.

Of course, the mobile world comprises more than just the Apple product line-up. Vectorworks is also developing with Google’s ARcore platform, but this is more complicated than the Apple environment, because Android runs on phones from many different manufacturers, all built from different hardware components.

For now, then, ARcore only works on Google Pixel phones and a small range of Samsung handsets. Here, Apple has the advantage of designing most of the silicon, the graphics language and the bespoke accelerometers in its own phones. This will make development and compatibility testing much easier for software firms like Vectorworks.

The quality of the rendered images is not photorealistic but nicely flat-shaded. Colours come through from the Vectorworks model into AR and it supports textures. Nomad also supports models in white, which European users prefer. This will only improve as Apple develops its platform and Vectorworks continues to develop Nomad.

The most impressive thing about Nomad’s AR capabilities is that they were developed and delivered in such a short timeframe. That’s especially true when you consider that most firms have been working on VR tools for years.

Nomad is simple to use and the results are impressive. One could argue that iPhones are very expensive, relatively speaking, but for those using the AR capabilities, one has to consider the sheer amount of processing available in such a small device. This comes at the cost. Nicol points out that a decent iPad Pro costs considerably less, has a bigger screen and can still run this augmented reality application.

While VR is exciting and certainly has its AEC uses, we believe that AR based on mobile technology will be the most common way of immersively interacting with BIM models, as every phone and tablet shipped from this point on will be a potential platform for an AR experience. 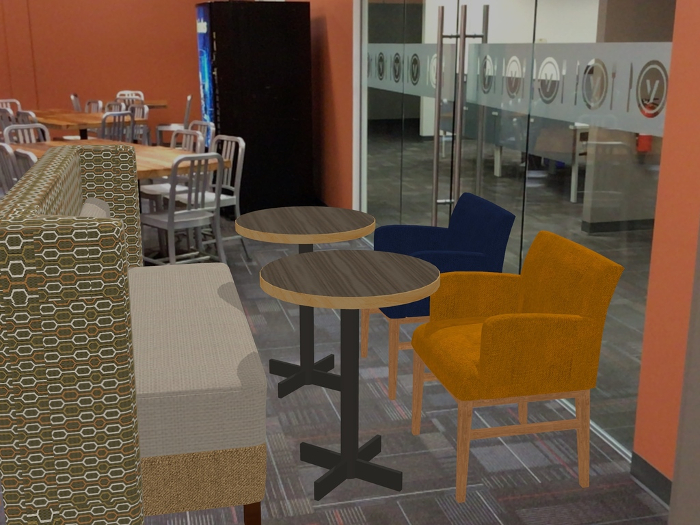 The new Apple iPhones (8, 8 Plus and X) have a number of new processors with custom silicon to enable workstation- like performance in the palm of your hand. One is a new, highly efficient GPU processor, the A11 Bionic 64-bit processor, which has three cores and is comparable to processors from AMD, Nvidia and Intel.

However, Apple not only develops the processor’s silicon but also the highly optimised Metal graphics language which runs on top of it. Metal uses a technique called Tile Based Deferred Rendering methodology, which splits the screen into multiple tiles for real-time analysis of what needs rendering. This in turn optimises GPU time, power and asynchronous operations, dramatically increasing rendering speed.

The A11 Bionic also features a dual-core ISP (Image Signal Processor) neural engine, capable of 600 billion operations per second and specifically tailored to match, analyse and calculate thousands of reference points from the live camera image. It also identifies objects and their position relative to a scene, for tracking and focus.

With so many GPUs and signal processors, all dynamically allocated, the new generation of iPhones is highly optimised for 3D AR experiences, be they for experiencing designs in the field or for gaming. So, while they may be expensive, what’s actually hidden inside that sleek form is the equivalent of a highly optimised, portable graphics workstation.

The new Vectorworks Nomad AR mode works with Apple’s new iOS 11 operating system and devices that support the ARKit. Users must have one of these iOS devices to be able to run the AR viewer: 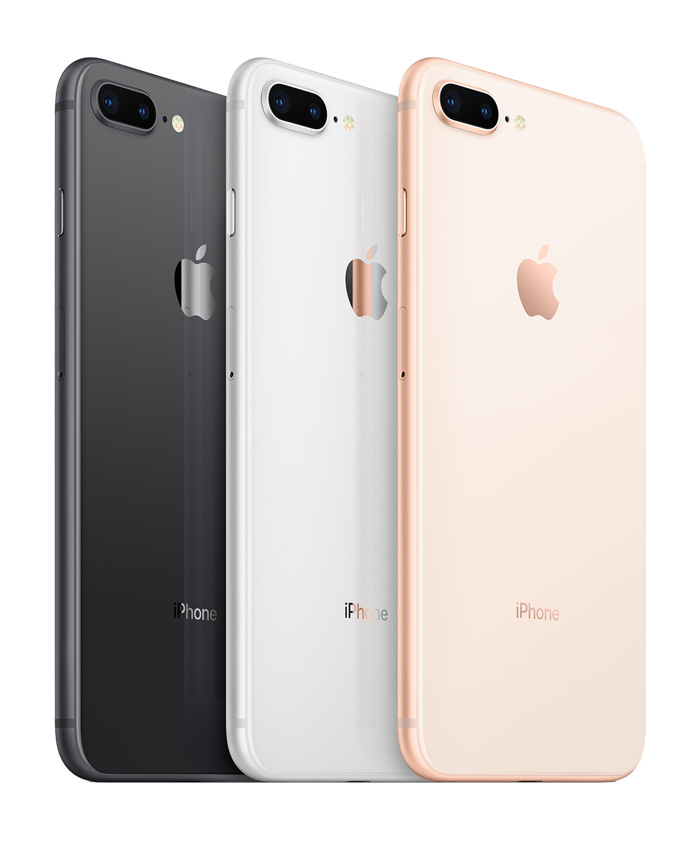