With impressive expandability and customisation, this single CPU workstation should appeal equally to small AEC firms and large enterprises.

When Lenovo launched its new ThinkStation P Series workstation last September it was the biggest thing to happen in ThinkStations since it bought the business off IBM in 2005. With an impressive new chassis offering tool free serviceability, expandability and customisation the global firm really took the game to HP, Dell and Fujitsu.

There are four models in the ThinkStation P Series family: two have single CPUs — the P300 for entry-level CAD and P500 for mainstream CAD — and two have dual CPUs — the P700 and P900 for high-end and ultra high-end simulation and design viz. 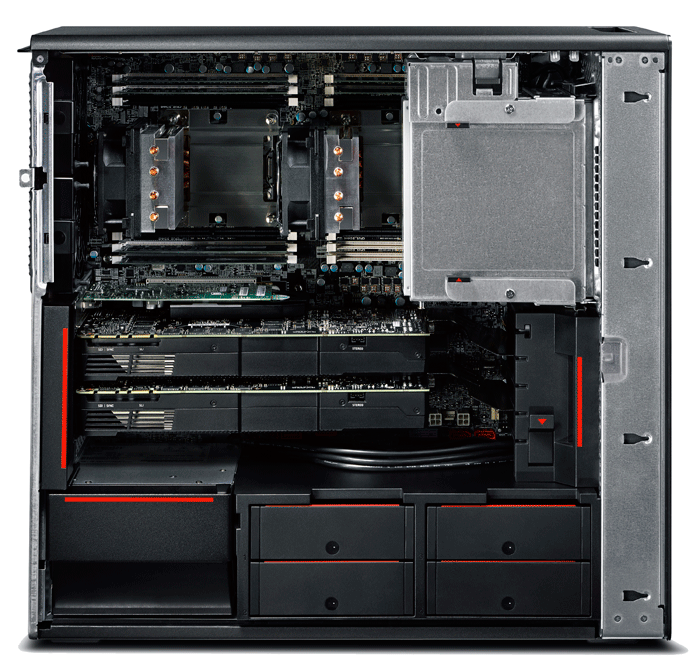 The ThinkStation P500 is the first model to find its way into the AEC Magazine labs. It comes in numerous specifications, so prices can vary dramatically — from £700 for an entry-level machine, right up to £8,000 fully loaded. 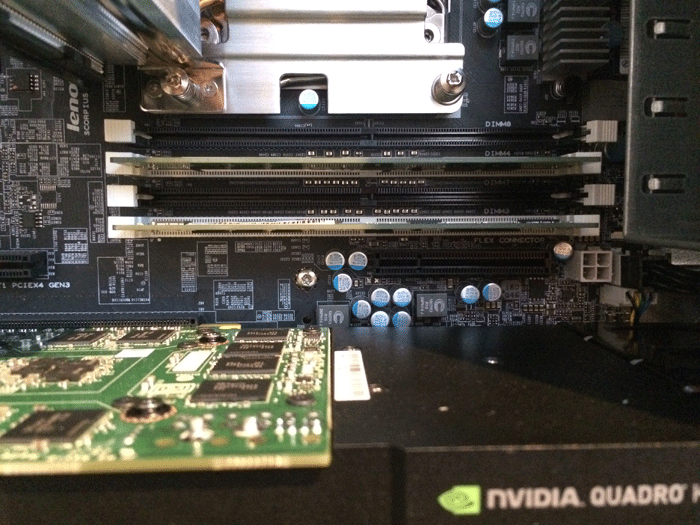 The FLEX Connector is a bespoke, small footprint PCIe slot designed to accommodate add-on technologies without having to take up a full size PCIe slot
Advertisement
Advertisement

Running at a clock speed of 3.7GHz (Turbo up to 3.8GHz) the Intel Xeon E5-1630 v3 CPU is at the sweet spot for CAD and BIM and put in a strong performance in our 3D CAD-focused tests. However, with only four CPU cores don’t expect multi-threaded ray trace renders to fly. It took 233 seconds to cut through our 3ds Max rendering, almost four times as long as the dual CPU HP Z640 (see our review here).

With support for four memory channels the Intel Xeon E5-1630 v3 CPU is expertly matched with 4 x 4GB DIMMs. This means you get the most out of the new 2,133MHz ECC DDR4 memory in terms of memory bandwidth, which can be particularly important in simulation workflows. With eight DIMM slots and four vacant slots there’s still room for upgrades should your needs change. 32GB DIMMs will be available soon so the ThinkStation P500 will be able to go up all the way up to 256GB.

Both CPU and memory are covered by an ‘air baffle’ which helps ensure cool air is routed directly over these key components. This helps optimise airflow and reduce fan noise and it appears that Lenovo has done great job here.

Even when hammering the 140W Intel Xeon E5-1630 v3 CPU for over an hour with a series of 3ds Max renders, the machine only gave out a barely audible hum. The rest of the time, even when running GPU and CPU in tandem in our 3D test suite, it was virtually silent.

The air baffle also looks the part. This jet-black piece is punctuated with red touch points, an industrial design feature that is used to highlight the many serviceable parts within the machine. Removing the baffle to reveal the memory banks and CPU beneath takes seconds. 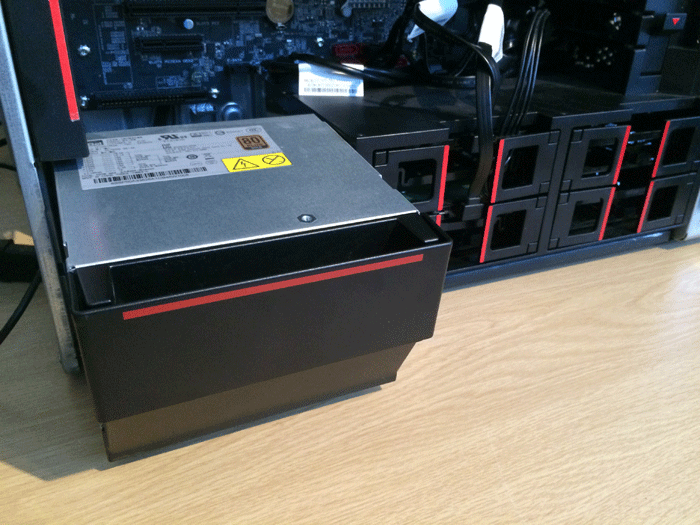 The Power Supply Unit (PSU) pulls out for easy servicing

Other user serviceable features include the power supply unit (PSU), drives, front fan, PCIe slot access door, and optical drive. None of the components require a screwdriver for removal but the ThinkStation P500 doesn’t have quite the same elegance as the ThinkStation P900, which uses blind connectors as standard.

Our test machine’s front fan pulls out nicely, but a wire still needs to be disconnected from the motherboard, as do power and data cables from the hard drives. However, blind connect drives, which use a different backplane design for a truly cable free connection, are available as an optional extra.

The drive bays themselves are neatly designed, if a little flimsy, and are able to house both 3.5-inch drives and 2.5-inch drives without an adapter. Simply press and pull on the red handle to remove the tray, then clip in a drive and pop back into the bay.

Four bays run neatly along the bottom of the machine for easy access once the side panel is off. In our test machine two were fitted with a 256GB Samsung SSD 840 Pro for the Windows 7 64-bit OS and applications and a 1TB HDD for data, leaving the other two free for upgrades.

SATA RAID 0, 1, 5, 10 array options are supported on the motherboard to boost performance or to protect against data loss from drive failure. A PCIe add-in card is available for SAS. 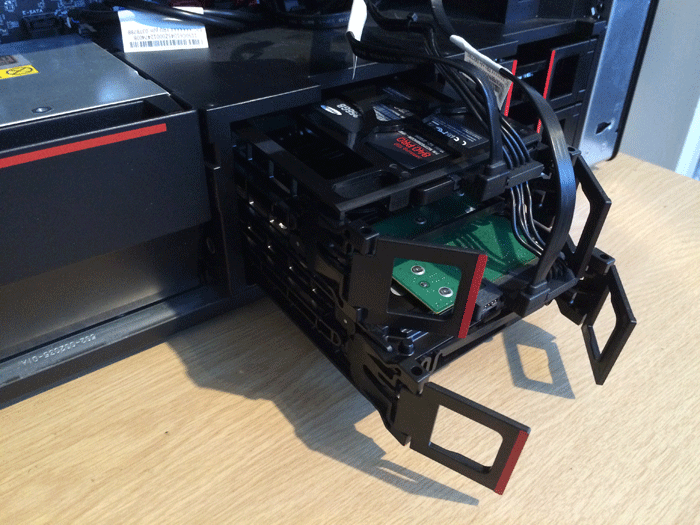 The drive trays pull out easily, but cables are still needed to connect each drive to power and data. However, blind connectors are available as an optional extra

Four drive bays should satisfy the requirements of most users, but additional storage can be added to the FLEX Bays that reside at the top front of the machine next to four nicely spaced USB 3.0 ports. FLEX Bays can also be used to house additional I/O ports, including Thunderbolt or card readers.

Maxing out its expansion options, the ThinkStation P500 also offers an optional 256GB M.2 SSD, which offers faster sustained read/write performance than a SATA SSD. It plugs into a FLEX Connector, a bespoke small footprint PCIe slot designed to accommodate add-on technologies without having to take up a full size PCIe slot.

For ultra high-end performance storage, a choice of two FusionIO PCIe SSDs is also available, but these will probably be of more interest for video editing and high-end simulation.

Given that CAD is the main focus of this machine it is supported well by the Nvidia Quadro K4200 GPU (4GB), which delivers a strong performance in our 3D graphics tests.

There are a couple of beefier options for graphics — the Nvidia Quadro K5200 (8GB) or Nvidia Quadro K6000 (12GB) — but these are probably overkill for most CAD users. Alternatively, save yourself a bit of cash by downsizing to an Nvidia Quadro K2200 (4GB), which should still deliver the goods in most CAD and BIM tools. 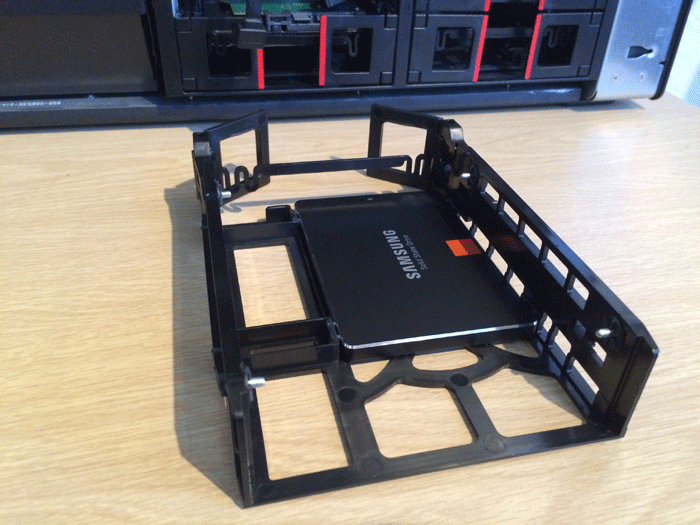 The drive tray can house 2.5-inch drives without an adapter

Adding a second graphics card is possible, but highly unlikely to benefit most AEC workflows. A more interesting option, depending on software compatibility of course, is to add an Nvidia Tesla K20 or K40. These GPU compute boards can be used boost performance in CUDA-accelerated ray trace rendering applications, offering a viable alternative to the dual processor ThinkStation P700 or ThinkStation P900.

The ThinkStation P500 is an enviable CAD / BIM workstation, with a well-balanced specification, excellent serviceability and plenty of room to grow in the future. It is sturdy and well-built with two integrated handles adding to its industrial good looks.

Functionally, the chassis is one of the best we’ve seen at DEVELOP3D. Components are intelligently laid out and access to the storage and PSU is particularly good. Clear red touch points and intelligent engineering make upgrades and repairs incredibly easy. No one likes downtime so this is likely to appeal equally to small teams and large engineering firms who need to keep thousands of machines ticking over nicely.

» Three-year limited warranty with on-site, next business-day service for parts and labour