This highly customizable dual Xeon workstation can be tailored for any design viz workflow, from ray trace rendering to VR. By Greg Corke

The Thinkstation P910 features four USB ports at the front. The right one is always on so you can charge your smartphone, even when the machine is off. The left one can be used for diagnostics – an error log can be downloaded to an Android or Windows phone or tablet or a USB stick

This ultra-high-end dual CPU workstation is for architects and CG artists who take their design viz seriously. With up to two Intel Xeon E5-2600 v4 series CPUs, 1TB DDR4 ECC memory, 14 storage devices and three ultra-high-end GPUs it has the capacity and flexibility to handle the most demanding design viz workflows – from physically based ray trace rendering to real time game engine visualisation and immersive Virtual Reality (VR).

With 14 cores apiece (28 in total) these 120W CPUs offer plenty of power for multi-threaded ray trace calculations in applications like 3ds Max Design or V-Ray for Revit.

Indeed, in V-Ray for Revit, with all 28 cores running at 2.90GHz, the machine made light work of every single scene we threw at it – delivering final renders around three times faster than a top-end Revit workstation with a quad core, overclocked 4.4GHz Intel Core i7 6700K CPU.

With such a large number of cores, performance in single threaded applications will naturally take a hit, though by not as much as one might imagine. With a base frequency of 2.4GHz (Turbo up to 3.3GHz) there’s still a strong foundation for everyday CAD work and we found performance in Revit to be perfectly acceptable.

Of course, there are a number of CPU options and those on a budget may consider dropping down to the significantly cheaper Intel Xeon E5-2640 V4, which boasts the same GHz but only ten cores. For the best of both worlds, the Intel Xeon E5-2687W v4 with 12 cores at 3.00GHz going up to 3.50GHz is hard to beat, but it will increase cost.

Graphics is courtesy of a Quadro M6000, which is currently Nvidia’s flagship professional GPU. While the 250W double height card will most certainly be overkill for pure Revit work (which would be much better served by the significantly less expensive Quadro M2000), it will give users of more demanding 3D applications like 3ds Max Design plenty of power for visualising scenes in real time. It’s also a worthy GPU with which to explore buildings in VR using the Oculus Rift or HTC Vive.

Moreover, with 3072 CUDA cores, there’s plenty of power for GPU rendering, using engines like V-Ray RT (see our V-Ray for Revit preview for more on this). For those really serious about GPU rendering the ThinkStation P910 is also capable of scaling up to three Quadro M6000s.

However, before you reach for the order form, you may want to hold fire, as the Quadro M6000 is due to be replaced by the Quadro P6000 very soon. With the promise of more performance, more memory and better handling of concurrent graphics and compute tasks, we expect this new Pascal GPU will be worth the wait.

With 128GB (8 x 16GB) of DDR4 ECC memory our review machine is well equipped for most design viz workflows, but with eight DIMM slots free there’s scope for plenty more.

The NVMe SSDs can also be RAIDed to boost sustained read/write performance above the respective theoretical 2,150 MB/sec and 1,550 MB/s of a single Samsung SM951. This could be an important consideration for I/O intensive workflows, such as video production.

With NVMe SSDs boasting around four time the sequential read/write performance) of SATA SSDs, we see little reason to specify a system with a 2.5-inch SATA SSD — unless you need a very high capacity SSD RAID array. The two 4TB SATA HDDs, which can be configured in RAID 0 (for performance) or RAID 1 (for redundancy), offer a cost effective way to store large datasets and design viz assets.

The capabilities of this hugely powerful workstation are undoubted, but the thing that really makes the ThinkStation P910 stand out is the beautifully engineered chassis. Tool free access to virtually all the key components makes maintenance and customisation incredibly easy. Swapping drives, in particular, is a joy with both 2.5-inch and 3.5-inch drives clipping easily into the four FLEX Drive trays, then slotting into the bays to automatically mate with power and data. 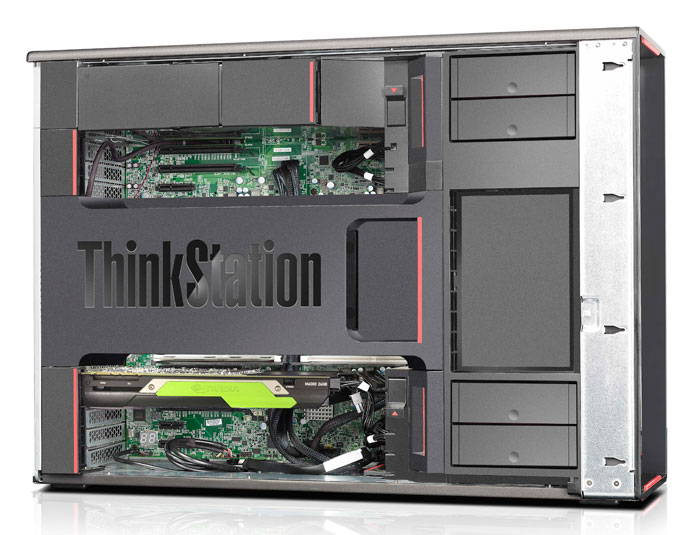 Overall, the ThinkStation P910 is an excellent machine for design viz. And with such flexibility in CPU, GPU, storage and memory configuration, it can be tailored for pretty much any workflow – budget withstanding, of course.