Don’t be fooled by the tiny chassis. This machine packs a colossal punch, rivalling workstation towers for demanding design viz and VR applications

Small Form Factor (SFF) workstations from the Tier One manufacturers (Dell, HP, Lenovo and Fujitsu) haven’t changed that much over the years. Yes, there have been significant advances in pro graphics and faster, smaller storage, but they have remained laser-focused on mainstream 3D CAD.

Meanwhile, specialist workstation manufacturers have aimed higher, differentiating themselves by producing diminutive machines with serious power inside. With overclocked CPUs and ultra highend pro graphics, you get raw performance to rival the meanest of towers, without the bulky chassis.

The WS-X1100S from Derby-based Workstation Specialists is arguably the most flexible SFF workstation we have ever seen. It can take any pro GPU, up to the ultra high-end Nvidia Quadro P6000 and, importantly, all manner of Intel Core i7 CPUs, including the 10-core Extreme Edition Intel Core i7 6950X.

Storage is also flexible, with support for one on-board M.2 NVMe SSD and either four 2.5-inch drives or one 3.5-inch HDD and two 2.5-inch drives. You can even remove the optical drive to fit an additional 2.5-inch drive.

The WS-X1100S’s Achilles heel is memory. With only two DIMM slots and 16GB DDR4 modules, this means a maximum of 32GB. This shouldn’t trouble your average designer, architect or engineer, but for those who take their design viz seriously – particularly when multiple applications are involved – it could be a deal breaker.

The WX-X1100S’s matt black chassis is nicely styled and well-proportioned, in contrast to the slender form factor of a Tier One SFF workstation. With no fiddly screws to contend with, the top, left and right metal panels come off very easily, but this is where the stress-free servicing ends. With so much technology packed into a small space, you’ll need very nimble fingers and lots of patience to upgrade or replace many of the components.

External ports are plentiful, however, with two USB 3.0 at the front and four at the rear, alongside two USB 3.1. WiFi is also integrated, which could be particularly relevant to those who want to move the machine from room to room, or from site to site (the small chassis makes it very portable). 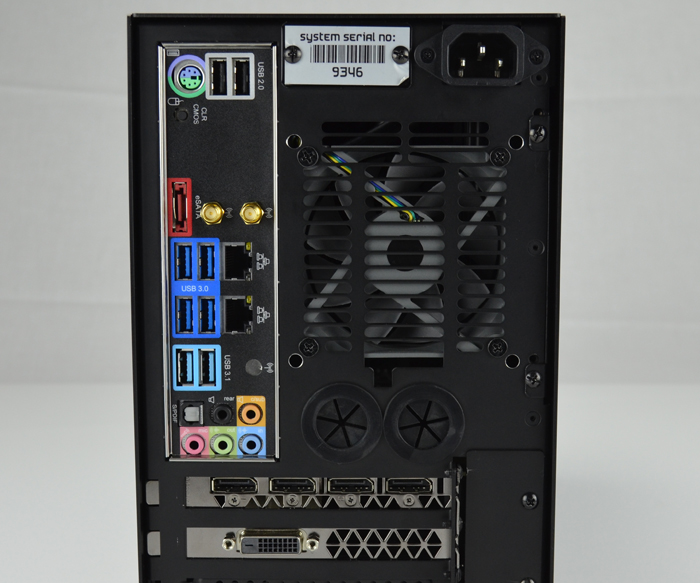 Rear of the chassis 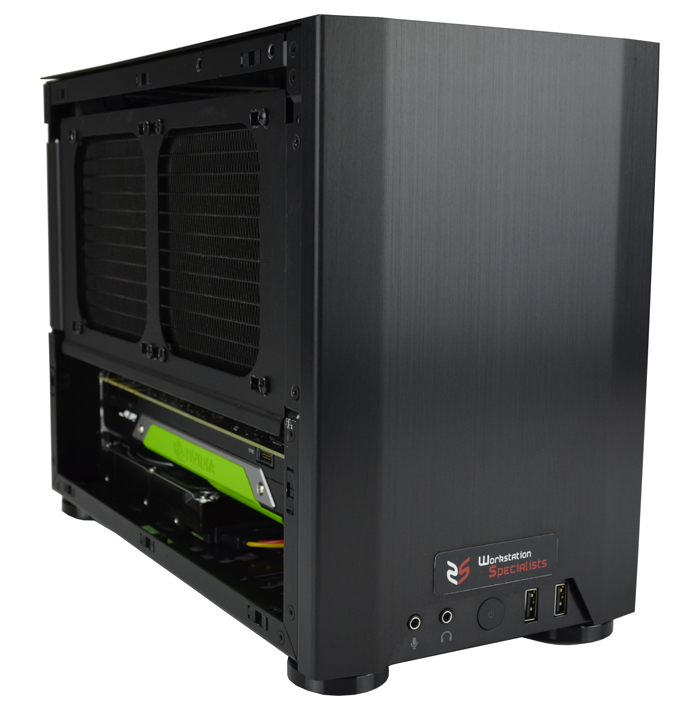 The WS-X1100S with side panel removed

Packing a 600W PSU, 140W CPU and 180W GPU into such a tiny chassis should be asking for trouble, but our test machine’s acoustics were superb, thanks to a water-cooled CPU and a number of lowduty fans. When idle, it gives off gentle hum, but this only got marginally louder when running the CPU flat-out on a ray trace render. Adding a GPU render to the workload and running it for a good 30mins increased noise levels a bit, but it was still perfectly acceptable.

With a 10-core Intel Core i7 6950X CPU, our test machine was literally crying out for some heavy-duty calculations. So, with stopwatch in hand, we obliged. It made very light work of ray trace rendering in both Autodesk 3ds Max Design and Luxion KeyShot.

With 10 cores, 20 threads and a phenomenal clock speed of 4.2GHz, this overclocked CPU offers performance to rival many dual Xeon workstations. Indeed, in KeyShot, it was only 35% slower than a dual Xeon E5-2650 v4 workstation (2.20GHz up to 2.90GHz), which has a total of 24 cores and 48 threads.

However, it’s in singlethreaded or lightly threaded applications that the Core i7 6950X excels. In our Delcam PowerMill test, which scales well over 2 to 3 cores, it would likely leave any dual Xeon standing, even when running three toolpath calculations at the same time. 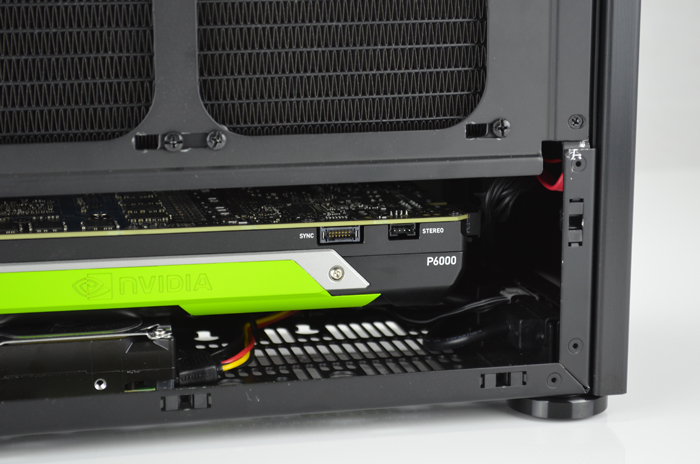 In Autodesk VRED, it easily handled everything we threw at it. Our complex automotive test model could be rotated smoothly, even when anti-aliasing was set to ultra-high. To put this in context (adjusting some benchmark scores taken from a lower GHz test machine), we expect it would produce more than 1.5 times the frame rate of the Quadro M5000, the GPU that the Quadro P5000 replaces.

Performance in our VR benchmarks was equally impressive, delivering 240 Frames Per Second (FPS) and 46 FPS respectively in VRMark’s Orange and Blue Rooms. For comparison, the Quadro M5000 only achieved 141 and 25 FPS, although this was in a workstation with the significantly slower CPU (3.2GHz Intel Xeon E5-1680 v3). Regardless of this mismatch, the WS-X1100S should prove to be excellent machine for demanding pro VR applications. 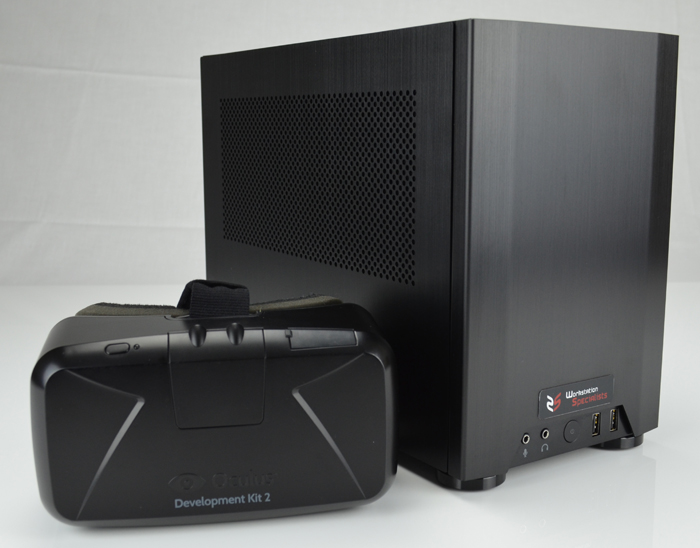 Interactive 3D performance in SolidWorks 2015 CAD software was less impressive. While we wouldn’t expect the WS-X1100S to set any records when viewing models in shaded and edges mode (as this view state is very CPU-limited and makes little use of the vast GPU resources) we did think it would perform better with RealView and Ambient Occlusion enabled. As it stood, it was actually slower than a Quadro M5000. However, as the Quadro P5000 is so new, and the first professional GPU to be based on the Pascal architecture, this will likely change.

The Quadro P5000 is not just about interactive graphics. With up to 8.9 TFLOPS of single precision performance and 16GB GDDR5X memory, it has plenty of power for compute- intensive processes such as ray trace rendering.

Here, the obvious test application would have been SolidWorks Visualize, as it is built around Nvidia’s physically-based renderer Iray. However, SolidWorks Visualize will not support the Quadro P5000 until the 2017 SP1, which was not available at time of testing (it simply does not recognise the GPU), so we were forced to explore other options.

We were also keen to try out ‘Pascal’s’ new Async Compute/Dynamic Load Balancing technology which is designed to handle mixed graphics and compute workloads better than before.

With Kepler and Maxwell Quadro GPUs, if the GPU was crunching its way through a render, it would often be very hard to position your 3D CAD model quickly and accurately, as it would jump about on screen. As a result, Nvidia used to recommend a multi GPU setup – one GPU dedicated to interactive graphics and another dedicated to compute.

This was certainly great for sales of GPUs but (software compatibility permitting) it did mean Nvidia couldn’t compete with AMD on price (whose FirePro and Radeon Pro GPUs are very adept at handling graphics and compute tasks concurrently, making a single GPU solution viable).

As the WS-X1100S only has room for one GPU, this would have been a limitation in the past but, with Pascal, things appear to have improved dramatically.

On test, with AMD Radeon ProRender running in the background on the Quadro P5000, it was still possible to rotate models smoothly in SolidWorks. Occasionally, there was a small pause before the model responded to the movements of the mouse, but nothing that really impacted modelling productivity.

As SolidWorks is not a particularly GPU-intensive application, we also tested with Autodesk VRED, which uses 100% of the GPU’s resources when spinning models. When running the GPU renderer in the background, frame rates dropped significantly, but we still found that models were very navigable. This would not have been the case with a single Quadro M5000.

We were hugely impressed with Workstation Specialists’ take on the SFF workstation. Not only has the company managed to deliver exceptional 3D graphics performance thanks to the impressive Quadro P5000, but it has also backed it up with a hugely powerful CPU that excels in both single-threaded and multi-threaded workflows. This well-built machine may be tiny but it packs a colossal punch. 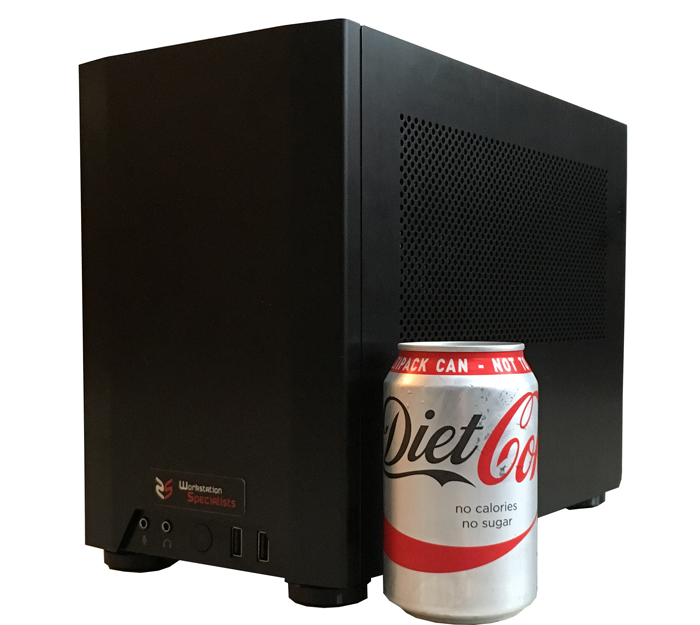 Tiny chassis with a Coke can for scale

As you might expect, there are some downsides. One is the 32GB memory limit, which will be a turn-off for some users. The other is the price.

At £4,916 our review machine might seem expensive – particularly alongside other SFF machines such as the HP Z240 SFF or Dell Precision 3420 – but the WS-X1100S is an entirely different beast. Tweaks to the specs can be made. Reducing the GPU to a Quadro M4000 and the CPU to an eight-core Intel Core i7 6900-K will knock off around £1,800. The good news is, it’s completely flexible.