Historically, most large bridges are ýoverdesigned¯ with substantial margins of safety built in to compensate for unknown forces that could affect their integrity over time. For the reliability, maintenance and economic viability of the bridges of the future, better performance from the ground up is critical.

New bridge under construction, with pre-stressed concrete beam being lowered into place by hydraulic crane. Dr. LinzellÝs group creates computer models, using Abaqus finite element analysis software, to study the structure and behaviour of the bridge as it is being built, helping civil engineers make design adjustments as work progresses.

ýCivil engineering has until very recently relied on linearly elastic, small deflection FEA methods used in software tools as the backbone of bridge analysis. However this method is, in many instances, an approximation and doesnÝt capture the full range of real-world nonlinear responses in these increasingly larger and more complicated structures,¯ says Linzell. ýHigher-order methods found in advanced FEA software are becoming more commonplace in the industry because they provide the capability to incorporate nonlinearities to account for realistic stresses and deformations that will influence the performance and service life of a bridge.¯ 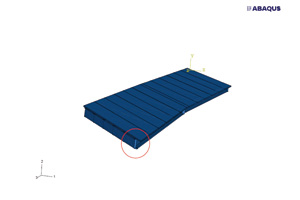 Corner of bridge superstructure at abutment.

Aspects that can be incorporated into an advanced FEA model in addition to material and geometric nonlinearities to assess the structural integrity of a bridge include the response of concrete or steel to the weight of the bridge itself as well as to traffic, wind, water, temperature fluctuation, corrosion, and even time (both concrete and steel ýcreep¯, resulting in long-term deformation). 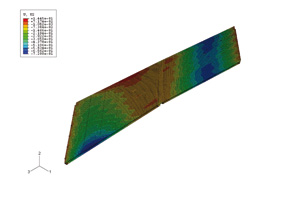 Abaqus 3D finite element analysis (FEA) model of vertical displacement contour of a bridge deck, representing how the entire bridge moves under its own weight.

Economics is another driving force behind the need for more sophisticated analysis tools, Linzell says. ýExtreme over-designing has become too expensive. ThereÝs now a strong push to minimize material costs and simplify design to reduce labour.¯ Lighter, stronger materials are being developed: steel that is available now has yield stresses of 100ksi (100,000psi), almost three times what they were just 10-15 years ago. But while stronger steel allows builders to use smaller sections to support the same bridge loads, the new materials may also be more flexible. ýYou need higher-order tools to better predict such nonlinear geometric deformation,¯ Linzell points out.

LinzellÝs group is concerned about a long tradition of separation between designers and constructors in the bridge industry. ýDesigners need to understand that a bridge doesnÝt arrive in one piece and get dropped into place; on site construction decisions can influence bridge life and functionality. You have to think about how itÝs going to be built because that in turn influences how itÝs going to perform in the end,¯ he says.

ýWhat weÝre trying to do is come up with guidelines or tools which will bring designers and constructors closer together. Those are the intentions with what weÝre doing with our FEA models.¯

How to build a virtual bridge

LinzellÝs group uses Abaqus/Standard software from Simulia, Dassault Syst?mesÝ brand for realistic simulation, to create these virtual bridges. First they build a numerical model based on an existing design. (They can work with designs that are still on paper, or in CAD format, or use as-built measurements taken from a structure already under construction.) 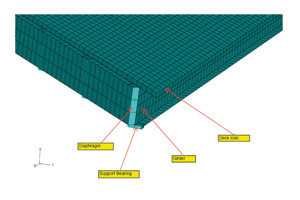 Detail of bridge deck, diaphragm and beams at abutment showing Abaqus three-dimensional brick elements used to predict structural response. The elements mathematically represent structural components and are linked together by nodes to form the model.

They next select elements (these are the tiny geometric shapes, mathematically representing physical units that are linked by nodes to form a numerical model) and then material models. ýYou choose elements depending on available material (constitutive) models and geometry then select whatÝs best for the materials being used, such as concrete or steel.¯

Next they set up the boundary conditions for the model. ýWe use Abaqus a lot in this stage,¯ he says. ýWe select how the bridge is going to be restrained, whether we are going to utilise a contact condition or a discrete restraint, and how friction will be represented, for example.¯

Finally LinzellÝs group applies various loads to the parts of the bridge, such as onto the bridge deck to represent vehicle loads or onto the beam faces to represent wind loads. (Stresses can be determined either at nodes or in the elements themselves.) ýThis is a fairly prescribed process, but it depends on what you are looking at ± such as traffic loads, or the weight of the structure itself,¯ he says. The Abaqus creep module is used for time-dependent factors. ýCreep is a big issue with concrete, and similar time-dependant effects influence steel behaviour as well. Thermal loads are important, too: WeÝve taken data from bridges where there was a 50-60 degree temperature change during construction that certainly affected structure behaviour.¯

Depending on where loads prove to be excessive, the bridge model and, ultimately, the performance of the actual bridge, can be modified. The process can be repeated until the optimum configuration for the bridge is reached. ýThereÝs a lot that goes into modelling how a massive, highly-indeterminate structure like a bridge is going to respond,¯ Linzell notes. ýAbaqus helps us get our bridge models as accurate as possible.¯ 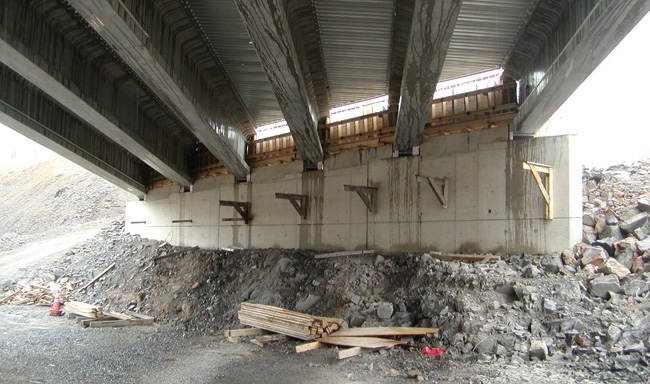 View from beneath a new bridge under construction, showing pre-stressed concrete beams and deck at the abutments. The weight of the bridge itself, as well as traffic, wind, water, temperature, corrosion and time all contribute stresses and deformations that influence the performance and service life of the structure.

The software has other application potential in the field of bridge analysis besides designing and testing new structures, according to Simulia senior engineer Deepak Datye. ýAbaqus can be used to evaluate the residual life of a damaged structure which is still standing, but may be cracked. And it can also be used for forensic purposes, to help pinpoint the reason for a collapse.¯

Linzell sees nonlinear FEA playing an increasingly important role in building better bridges for the future. He is part of a group of researchers, practitioners and Department of Transportation (DOT) engineers who are collecting questionnaires from fellow bridge-building professionals related to their current use of numerical tools.

ýWe are hoping to come up with unified FEA guidelines for bridges because our industry really doesnÝt have a unified publication yet,¯ he points out. ýOther disciplines like aerospace engineering, and to some extent mechanical engineering, already do, so weÝre trying to initiate that process.¯